Rogue Audio Cronus Magnum II – is this the one? 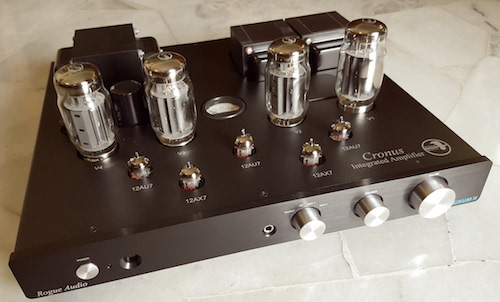 ASKING a tube junkie whose formative years were shaped by a single-ended 300B amplifier to review a push-pull tube amplifier can be akin to asking an oenophile to consume only supermarket wines. That’s exactly what the editor did. Over the years, my journey into the abysmal depths of tube amplification has narrowed my preference pretty much down to the tonal qualities of a good 300B tubed single-ended amplifier, although I do have soft spots for both 845 and 211 tubes with a caveat that it must be within a single-ended design.

You can always feel the personal touch in hi-fi equipment when the company owners are passionate individuals who bloomed from teenage hobbyists into business owners. Mark O’Brien is one such individual who took the final plunge in the mid-1990s to start Rogue Audio, with a philosophy to provide high quality electronics at affordable prices. The Cronus Magnum series has evolved over the years since its launch as an EL34 tube based amplifier.

The core difference between single-ended and push-pull topologies can be simplified to how the tubes are connected to the output transformers, in addition to the type of transformer used which will determined how waveforms pass through the tubes. The purist would obviously be skewed towards single-ended designs, some for the musical attributes and others for snob appeal. As for me, tonal character and musicality are paramount. 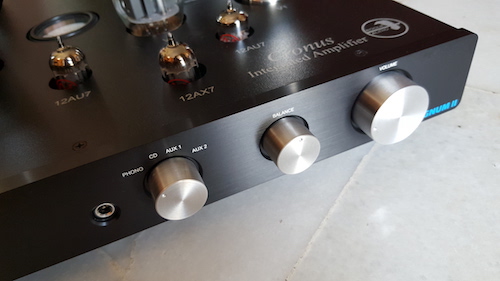 It’s refreshing that the review unit of the Cronus Magnum II came with a set of four Tung-Sol KT120 tubes, two JJ Electronics EEC82 and interestingly, a pair of premium JJ ECC803S and a single JJ ECC802S, instead of the usual Electro-Harmonix tubes used by many manufacturers. The Cronus sports a semi-modern design outlook with the exposed transformers and a line of formidable KT120 tubes fronted by semi-recessed dual triode tubes. The layout is simple, with a large volume control knob on the right flanked by an input selector and balance control while the power switch and headphone socket are on the other side.

The rear panel has input terminals for your turntable and three other line source components as well as fixed and variable output terminals for subwoofers or bi-amping. Being a careful tube enthusiast, I ensured that the bias was correct – it’s great that Rogue incorporated an ampere meter into the top plate – biasing each output individually was easy with the wooden tool mounted on the aft of the top plate. 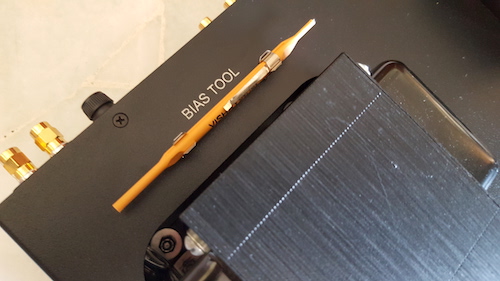 LISTENING
So, belt fastened and clutch depressed, I waited for the 100 watts of power on tap to launch. First, phono, where I hooked up a Yamaha GT-750 direct drive turntable with a Grado The Reference cartridge to play Who Can It Be Now? from Men at Work’s Business As Usual album. I started swaying and toe-tapping immediately, to my surprise. The Cronus Magnum II was really rocking the JBL 4312A speakers like there was no tomorrow. I was greeted by a musical façade that made me forget about being overly analytical and just enjoy the music. The bass was how I like it to be, weighty and taut with good controlled decay. This amplifier can go loud, and I mean loud with excellent headroom belting out fatigue-free timbre, warmish in tonal texture and with impeccable pace and timing to get you listening for hours in a day. First impression matters.

It got me thinking that the review should take a different stance. Could this be the “one” integrated tube amplifier for all occasions without dipping into your kids’ education fund? I decided to take the analogue path to stress out the on-board phono stage as getting coherent sounding digital sources is much easier. I proceeded to put together a few vintage and modern turntables, cartridges, step-up transformers (SUT) and phono stages to give it a good workout.

How does one establish the baseline performance of this integrated amplifier? Well, I fed it with Money from a Dutch pressing of Pink Floyd’s Dark Side of the Moon playing through a spring suspended Thorens turntable with a SME3009 Series II tonearm and Shure M97Xe cartridge to see if it wavered from my first impression. The ka-ching sound from the cash register had a natural timbre and element of air that underlies a good tube amplifier design. The bass guitars followed by the drums both had good weight and were in no way thin sounding like some KT88/KT90/KT120 tube amplifiers that I have listened to. It showed that the on-board phono stage doesn’t waver when fed with a lesser source, the whole musical experience is there although with less detail and impact as the SME/Shure combination isn’t the most transparent, but the familiarity from before is certainly there. 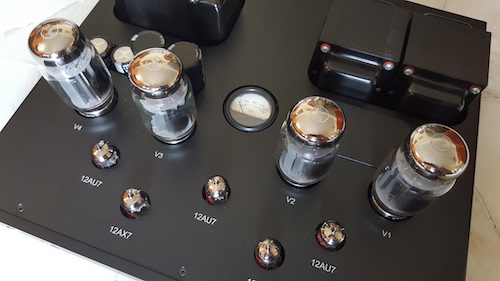 The noise floor is very low and this was apparent when I played the second track of Side A on Rob Wassermann’s Duets where Rickie Lee Jones sings The Moon Is Made of Gold accompanied by Wasserman’s double bass, through a Gold Note Giglio turntable mounted with a Vasari MM cartridge. For a 300B tube amplifier connoisseur, I like the vocals reproduced by the Cronus Magnum II. It has a sweetness that is not present in most muscle push-pull amplifiers. The Guarneri Homage speakers were a joy to listen to with the Cronus Magnum II as the vocals were so well controlled when her voice shrills into unbelievable highs. You can gauge the swiftness of the swipe at the bells towards the end of the song from the sparkling timbre produced. The tonal variations of Cheryl Bentyne singing Angel Eyes on Side 2 of the same album is like a cross-section of a well-baked brioche where you can see all the well-formed layers in the cross-section. You hear all the subtle nuances of tonal variance that draws your heart in and you can especially feel the thump of the double bass notes coming from the 6.5-inch drivers of speakers – there is a strong hold in the manner the weight forms on the bass note leading to a sustained extension and decay. Here is the surprise which  O’Brien shared this with me: “The phono stage is actually solid state with passive RIAA equalisation. It is very accurate and it cascades into the tube stages so it still retains the tube sound”.

Could this amplifier produce detail and transparency from pricier equipment? I installed a Top Wing Blue Dragon cartridge on a Micro Seiki BL-111 with a Peerless SUT plugged into the phono inputs of the amplifier. This is a real gem of an amplifier as it manages to reproduce the life feel of the Bill Evan’s Waltz for Debbie. If you are really into detail, you will be familiar with sounds of patrons clearing their throats, clinking their wine glasses and most of all, the live applause after the performance that’s usually very difficult to reproduce with the soundstage correctly layered.

Detail aside, the timbre from the piano notes were to my liking as one can feel Evans running his fingers lightly through the keys. Lesser amplification can only reproduce a murmur of the details from the recording but Cronus Magnum II sails through the maxim of quality input equates to quality output. I found myself absorbed into the recording and soon forgetting about detail spotting, just enjoying the music instead. I changed headshells to switch over to mono with the Miyajima combo to see how best the timbre of Milt Jackson’s vibraphone from his Milt Jackson Quartet album was reproduced. It’s a difficult tone to reproduce accurately, much like a celesta. The airiness and extension lined my ears with such sweetness as the each note reached its peak before the micro vibrations from the decay were felt. 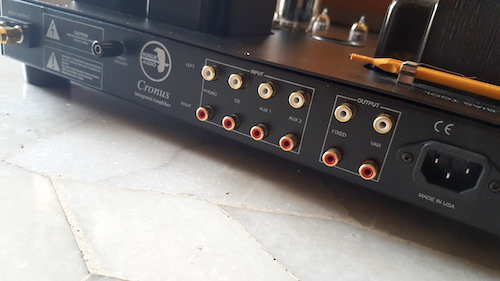 Any self-respecting tube junkie will not finish a review without a bit of tube rolling. I replaced the sets of 12AU7 and 12AX7 dual triodes with matched NOS Telefunken ECC82 and ECC83 tubes from 1965 (these have a market value of US$2,500) bought from reputable online vendors. This brought the Cronus Magnum to an entirely new level altogether. The soundstage was much wider and airier, and music was played back with an immediacy akin to a good solid state amplifier without losing the tonal attributes of tube amplification. An all-NOS Mullard combination, comprising 4003 and ECC83 tubes, added a touch of warmth and naturalness to the tonal qualities. The Amperex Bugle Boy combination was somewhere between the earlier two options. JAN Phillips, Raytheons and GEs found themselves plugged in for shorter periods. I couldn’t get hold of any matching output tubes to play with, unfortunately. That’s the beauty of having a tube amplifier as you can change its character to your fancy depending on your mood. Having tempted you, I must say that the factory supplied tubes are well matched to the voicing of the amplifier. 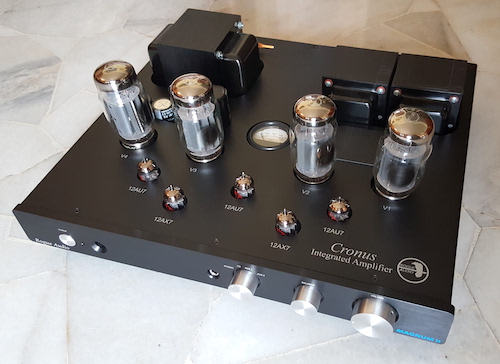 THE LAST WORD
This was a real eye opener for me, having journeyed far and wide into tube amplification. It’s difficult to get the same tonal quality and image density with such musicality from an amplifier at this price point. The phono stage is in a class of its own, partnering well with both MM and MC cartridges way above its cost. The base amplifier doesn’t lose out on its performance when you plug in line equipment. A similar tonal image was present when I played it extensively with SACD player, DAC, DAP and even with a turntable hooked up via a €13,000 phono stage.

This is an amplifier that you can keep using for a long time as tube rolling will change the character as your listening preference evolves and source equipment gets more expensive within your equipment chain. Although it’s rated at 100W, it’s not about loudness or power, what is important is how it holds on to the tonal quality as you play it louder or load with inefficient speakers such as the 86dB/W Guarneri Homage. The Rogue Cronus Magnum II did not disappoint and I believe this is due to the excellent transformers and design topology used. You can also custom order a built-to-spec Cronus Magnum II based on the upgrades available directly from the factory. A full tube cage cover is available on order for those with young children at home.

See Meng is a banker turned sourdough enthusiast. He likes his music as natural “tasting” as his sourdough loafs. Other than classical or jazz, his taste of music never left the 1980s.