Musical Fidelity Nu-Vista CD player – not for all tastes 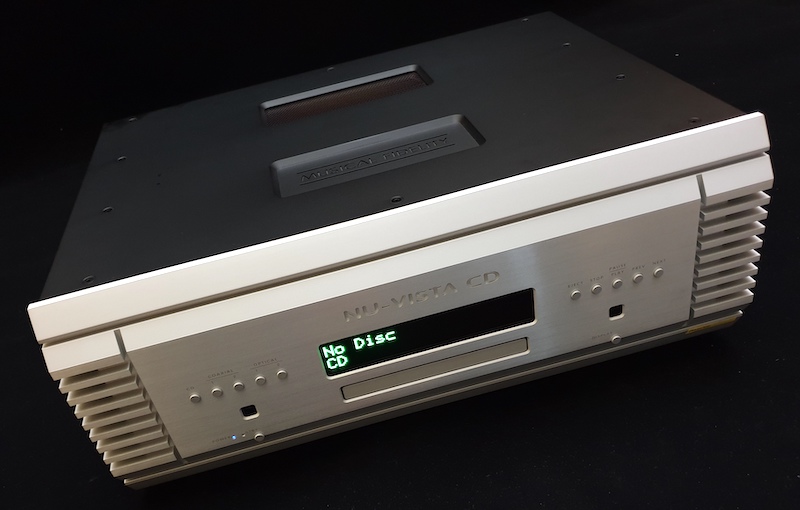 THE Musical Fidelity Nu-Vista CD player is an 18.62kg behemoth sporting the finned Nu-Vista family chassis design. Its simplistic front panel, with nipple-button controls flanking both sides of the tray, is visually outstripped by what appears to be a brass rear panel that houses the regular series of input and output terminals.

There is a cut-out on top where a row of four Nuvistor signal tubes inside are visible. I couldn’t get a reply from Musical Fidelity if the tubes are used as buffers or as an integral part of the output stage, or a confirmation if there is brass/copper sub-chassis.

The DAC is a 32-bit Delta-Sigma Bitstream circuit that upsamples to 192kHz before deploying an eight-times oversampling digital filter. The Nu-Vista can be used as a standalone DAC via its two coaxial (up to 24-bit/192kHz) and two optical (up to 24/96) inputs. A coaxial and optical output each enables it to be used just as a transport. But there is no provision for USB connectivity, which makes the Nu-Vista dated, given the market alternatives and consumer preference today. 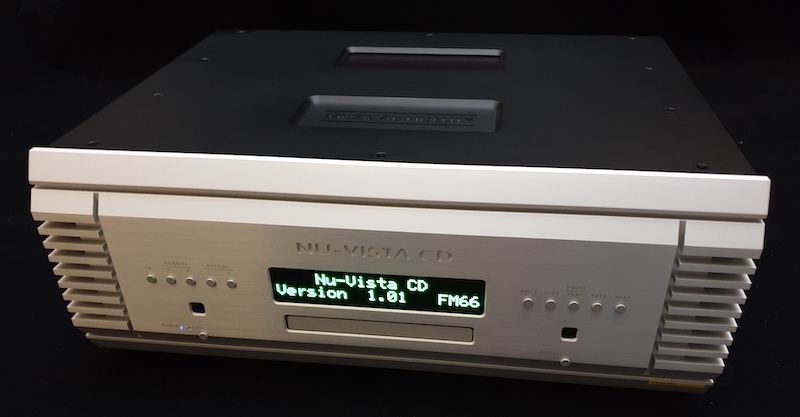 Powering up gives the Nu-Vista a McIntosh-like feel as the Nuvistor tubes are illuminated with a shade of red before turning green once ready for playback. This is in sync with another array of lights illuminating the bottom of the chassis. Thankfully, the tacky illumination can be switched off. There are balanced outputs (4.4V) alongside a pair of single-ended outputs (2.2V) which is marginally lower than the output level provided by most manufacturers.

LISTENING
I had mixed feelings on first spin with the Nu-Vista. The album of choice was an excellent FIM Records pressing of Tsuyoshi Yamamoto’s Misty. Piano lacked the reverb that I’m so accustomed to. When Yamamoto hits the high-pitch keys to the right of the keyboard, it lacks the sparkle and air that I hear with my Cary Audio SACD player. The feathery touch of his fingers teasing the keys gently before gently lifting was missing. I used to be drawn into that passage where I can imagine Johnny Mathis singing “…look at me…” as Yamamoto plays that bar, drawing one in anticipation of the next hammer striking the string. It sounded uninspiring as though the muffle paddle was semi-depressed. That sense of effortlessness as well as the colourful harmonic wrapping each note were missing. 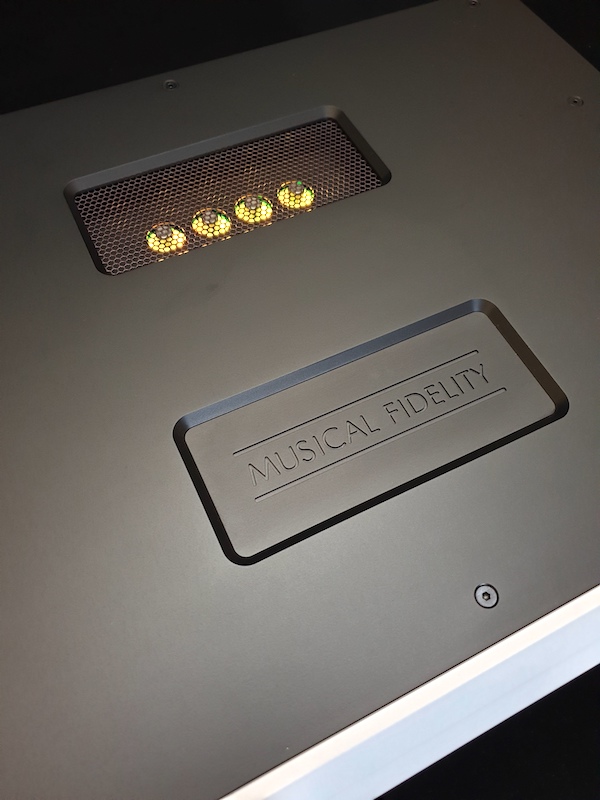 The drums were distant when they kicked in to accompany the forward-sounding piano solo. Micro detail was picked up well but filtering appeared to be a tad aggressive as the brushing on the hi-hats was less apparent, although the soundstage was much wider as it now appeared to be further to the right, beyond the speaker. It is light on the bass, to the extent that the kick drum was relegated to a mere thud. The entire presentation was without musical involvement compared with my resident CD player, on which the Red Book layer of the FIM SACD sounded very close to my early vinyl pressing. 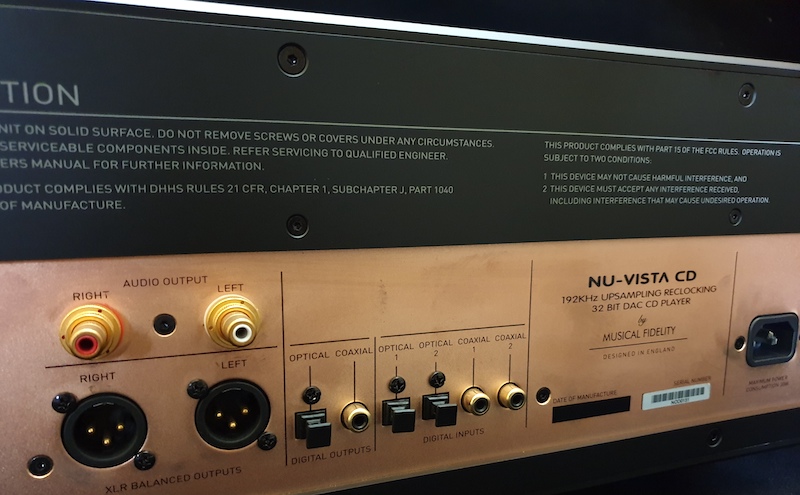 On The Eagles’ Hell Freezes Over album, the crowd’s cheering lifted my spirits and cleared the sky with a good spatial sense of the layering within the soundstage, as you can distinctly identify the initial cheering from both sides of the stage to be further away compared with the immense burst of joy closer to the stage after Don Henley speaks. The beauty of  the track Tequila Sunrise is that it allows you to distinctly evaluate the soundstage and pinpoint the individual instruments and vocalist across the stage.

The Nu-Vista excels in its ability to individually separate and layer the soundstage, leaving you to judge how well each instrument is reproduced. In this instance, you can feel the tautness of the strings, layered with a marginal weighty feel the decisive strumming of acoustic guitar, but it lacks the lower end bloom that was present when I played it back-to-back against the Cary Audio player. The lead vocals sounded clinical, with a lesser degree of tonal inflection and I suspect that this could be due to how the Nu-Vista is voiced to be more digitally accurate. The soundstage again appears to be wide with Joe Walsh to the left and the rest much further right, but the perception of depth wasn’t as deep as I’m accustomed to. 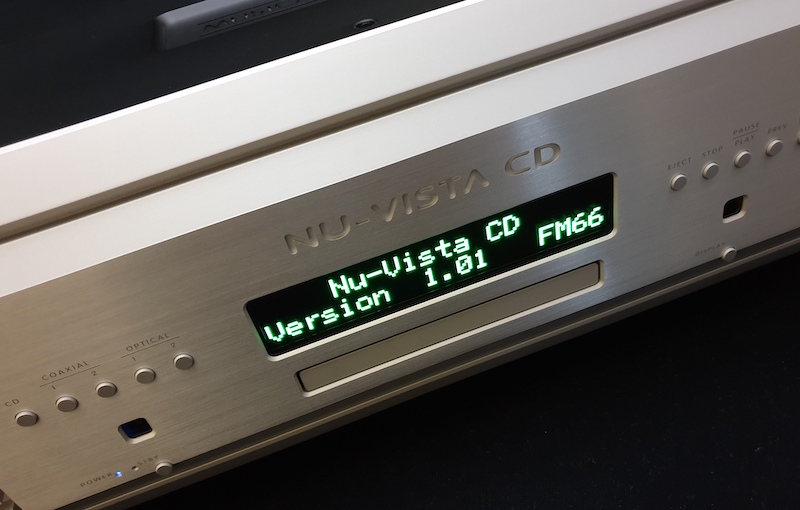 Tequila Sunrise stirred my curiosity over the Nu-Vista’s ability to portray inter-spatial separation. Take a closely seated orchestra playing Gnomus, from Mussorgsky’s Pictures at an Exhibition conducted by Fritz Reiner, as an example. One would sit back awaiting the slam from the large brass and percussion section in the introduction but one would be greeted with muted burst instead. The low-end whack was lacking. The woodwinds and smaller brass instruments have a good sense of immediacy and once that dies down, you get a generally muted feel with the strings. Inter-spatial separation is stretched as instruments are too widely separated to mimic a closely seated orchestra. The musical weight with a provocative tonal landscape is surprisingly absent from this experience. It sounded flat.

Prior to conclusion, I used the Nu-Vista as a transport to pipe the digital feed into my Cary Audio SACD 303T Professional and DAC 200ts DACs, first via coaxial and subsequently using the optical output, in an attempt to isolate the root cause behind my earlier experience. This was certainly more musical sounding with a greater degree of bloom and involvement present. Switching duties between the Nu-Vista and Cary Audio where the Nu-Vista now played the DAC resulted in a similar experience as the Nu-Vista as an integrated CD player. 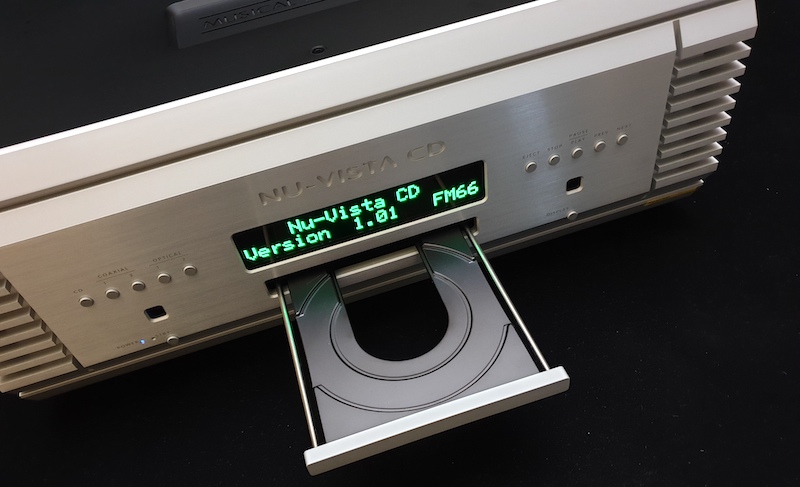 LAST WORD
The Nu-Vista series is meant to be Musical Fidelity’s statement products and the Nu-Vista CD player looks every inch of it. However, it appears dated as there are glaring omissions against obsolescence, like the lack of USB connectivity and DSD capability.

Its musicality may not be to my tastes, given my penchant for vinyl, but there is something for everyone in this hi-fi hobby of ours. There are several very analogue sounding CD players that I have come across over the years and this is certainly not in that category.

The Musical Fidelity Nu-Vista CD player requires careful system matching for it to shine. I feel that in the quest to achieve technically measured perfection in the digital domain, engineers sometimes miss the forest for the trees. Music without musicality is much like a marriage without love and passion.