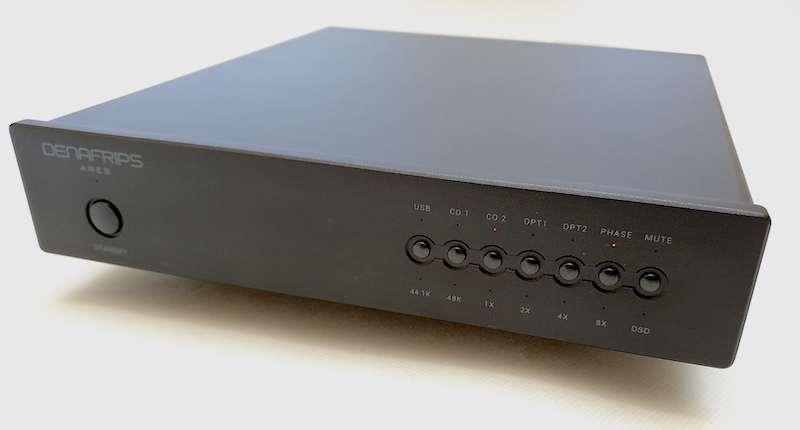 + Deep and wide soundstage; beautiful tonality with a slight warmth; tight and fast bass; smooth treble, not prone to sibilance.
– Nothing at this price point; MQA support would have been nice.
Sound: 8.5/10
Value: 9/10

I’VE always wondered why Denafrips has been under the radar. Reading about impressions and how people rate the entry-level Ares have piqued my interest even more, yet reviews of this unit are few and far in between.

For those who don’t know, Denafrips is a Chinese audio company that produces proprietary R2R DACs. The range includes the Ares, Pontus, Venus and Terminator. Seeing how the DACs have stood the test of time, the company has also made a foray into amplifier territory with its Hestia preamp and Hyperion power amp, both looking as monolithic as the DACs.

The Ares feels hefty, the bulk of the weight likely from its power supply stage. Power is channeled through a custom-wound toroidal transformer into a bank of 72 smoothing capacitors after rectification. Mighty impressive on paper; however, I would be concerned if one shorted in some improbable incident.

But having said that, using a large bank of small capacitors does have advantages which are; a) much lower ESR compared to a single large capacitor, b) faster charging and discharging, and c) reduced inductance and improved response due to distributed capacitance into a power and ground plane. These, of course, are only general assumptions; as to why Denafrips went with this design can only be answered by the designer.

Even though Ares is Denafrip’s entry-level DAC model, it is no lightweight. For the price, it is overbuilt, using 0.01% precision resistors with true balanced 20BIT R2R, plus 6BIT DSD via 32 stepped FIR filters. Conversion on the USB input is handled by an ultra low jitter AK4118 digital receiver chip capable of handling up to 11.288MHz (DSD 4X) and 24-bit/384kHz PCM. All its other inputs support up to 2.8224MHz (DSD 1X) and 24/192 PCM. 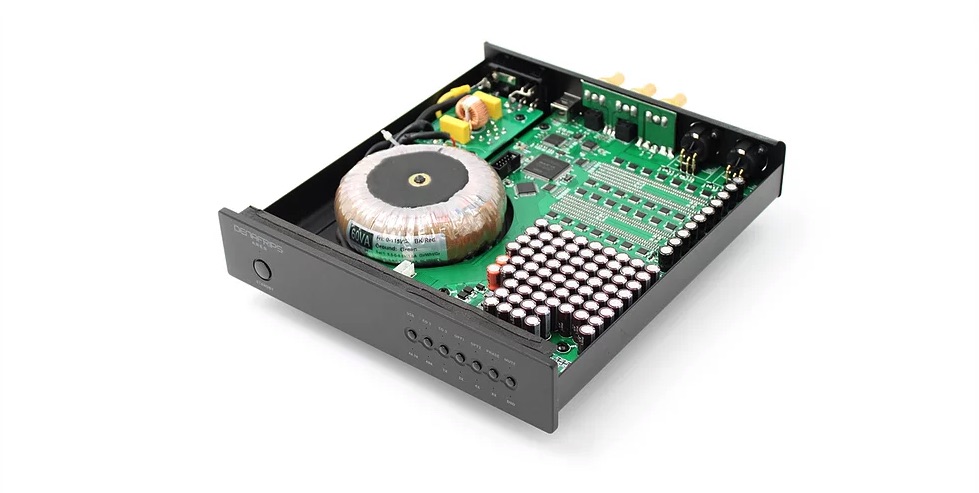 The Ares comes with two coaxial, two Toslink, and a USB input to support all your digital needs. To fully exploit its true balanced R2R architecture, the Ares has a pair of XLR outputs (4.4Vrms) aside from RCA out (2.2Vrms). Being a pure DAC, it does not have a variable output, a move I fully support as adding additional stages into a DAC just complicates things, it is an extra step for the user, like choosing between line or variable output.

LISTENING
The Ares looked small on my rack, dwarfed by the preamp, power amp, and headphone amp. But as such, I’ve always had small digital stages. Compared with the Chord Hugo V1 and Matrix Mini-i, the Ares looks massive. Playback from my MacBook Pro 2017 was effortless (as usual with Macs), requiring no additional drivers when playing Tidal and iTunes. Playback through Windows on my Acer Aspire V5-573PG required a downloadable Amanero driver from the support page. Driver installation was a breeze and there were no hiccups during installation or playback. 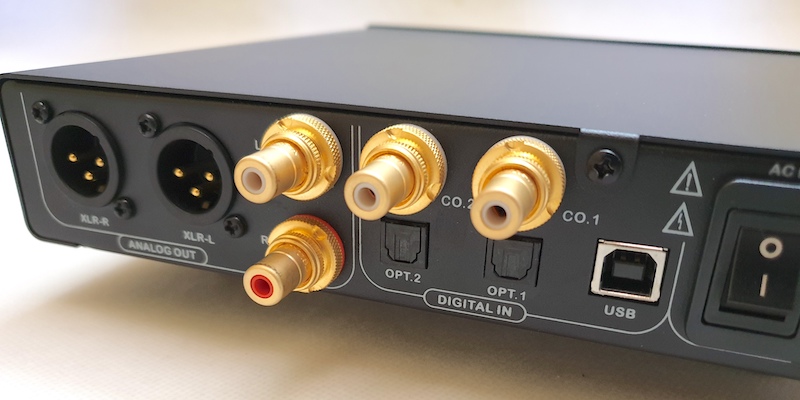 The Ares handled all file formats I threw at it so no worries in this area. While it is compatible with a wide range of inputs and formats, I would have liked to to see MQA capability in DACs at this price point just to complete the package.

Spending time listening to the Ares was riveting. Fresh from the box, there was a slight harshness in the highs but over time, the treble bloomed and smoothened out. It could also be my ears getting used to the sound; regardless, I decided to play it safe and run it in for at least 100 hours. The unit barely gets warm; at room temperature without air conditioning, it was hard to tell whether it was running or not.

It doesn’t take long to get accustomed to an R2R DAC. Compared with the Hugo, the Ares is smoother in the treble region and has less of a digital glare. I’ve been a fan of Sting ever since I heard Desert Rose back when I was in school, so naturally, I gravitate towards his songs for reference purposes. Although Desert Rose is a bass-y song, there’s still a lot of information contained in the highs. I thoroughly enjoyed listening and rediscovering the symphony of strings on this track by the London Session Orchestra. At no point in time did it interfere with Chris Botti on the trumpet. 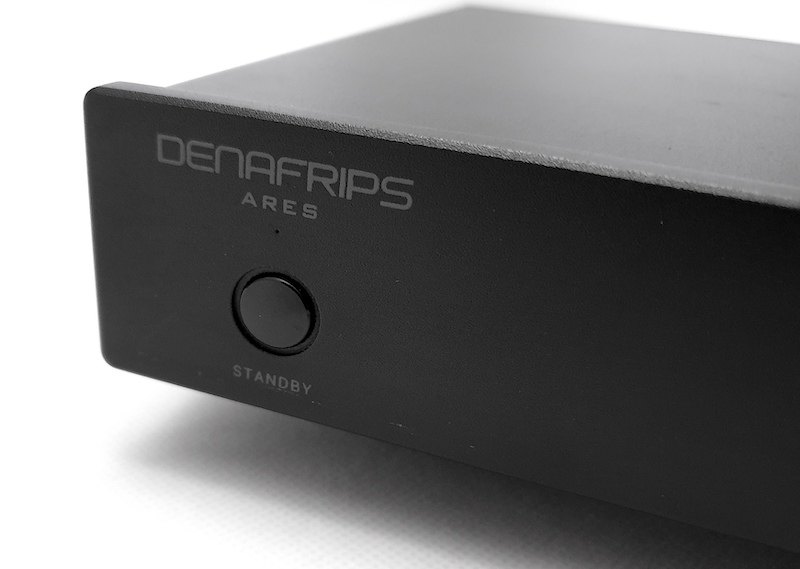 Percussive sounds have depth and slam, and nothing is flabby when it comes to bass notes. The first track in the KLIAV 2017 Commemorative CD is a demanding piece, requiring articulate separation between the drums, cymbals and other percussion from the softer flutes and vocals. The difference between the Hugo and Ares is not day and light, both are very competent and both rendered Pangu Separates Heaven and Earth by Zhang Zhao very well. I would give the edge to the Ares in this comparison as its slight warmth added musicality to the already beautiful song while Hugo was better at resolving the micro details. The Hugo does sound a smidge brighter than the Ares, lending to to its resolution.

What the Ares does best is the soundstage. Both through headphones and speakers, the Ares renders a wide and deep presentation. Space is tangible and instruments extend beyond the listening space. Imaging is a tad better on the Hugo but I wouldn’t lose sleep over it considering neither share the same architecture – one is a resistor ladder network while another is a custom-coded FPGA chip. The only Delta Sigma DAC that I have to compare (thus completing the DAC trifecta) is the Matrix Mini-i, but due to its lack of refinement, it is hardly a fair comparison.

The Ares is quite engaging to listen to when it comes to vocals. Mitski sounds lush and organic in her Be The Cowboy album, as long as we avoid the grunged-up effects on tracks like Why Didn’t You Stop Me? and Blue Light. Two Slow Dancers brought her into my living room and its correct tonality made things all more believable. It was the same with Run Your Finger Through My Hair by Blues Company. This invitation to the blues cannot be declined as I found myself listening to the Ares into wee hours.

THE LAST WORD
The Ares is a worthy competitor to other DACs regardless of their architecture, and has been a staple for people who want to venture into R2R territory.

If you’re looking to upgrade from your entry-level DAC, you should definitely give the Ares a try. Its effortless presentation and expansive soundstage, especially at this price point, makes choosing it a no-brainer.