CanJam 2019 Singapore – an earful of headfi 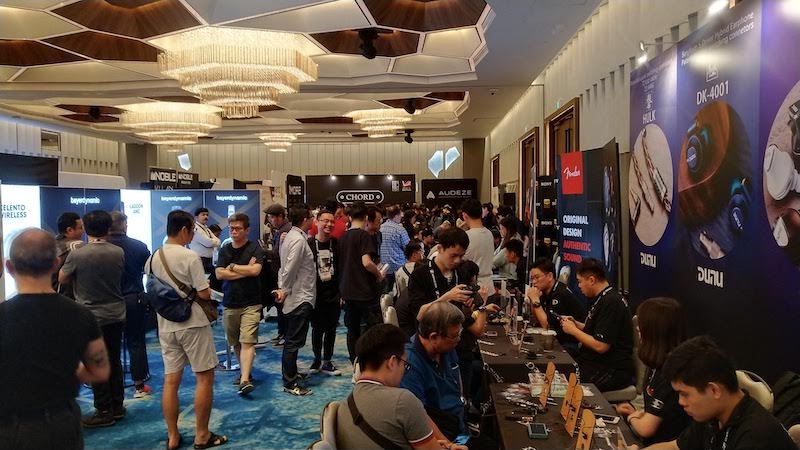 ESTABLISHED in 2006, CanJam started out in the United States and was organised by head-fi.org. Since then, the world’s premiere headphone audio show has expanded to Britain, China, and Singapore. This year’s CanJam Singapore was held on March 30-31 at the Pan Pacific Hotel, operating from 11am until 7pm on both days. There were seminars on both days covering topics like “Headphone Measurements” and “Exploring Digital Audio”, but joining a seminar wasn’t in my to-do list, so I strolled through the trade show floor to experience one of (if not) the world’s largest headphone convention.

All the obvious big consumer audio brands such as Sennheiser, Beyerdynamic and Sony were present in the trade show. Walking in, I was greeted by Sennheiser’s marketing head Alex Lim – their booth was at the centre of the hall, making it prime real estate. The flagship HD800S headphones was, as always, placed on the mantelpiece. Having listened to it a few times, as well as the previous generation HD800, I was well aware of how resolving it is with the right equipment. But perhaps the pièce de résistance should have been Sennheiser’s first ever speaker system, the Ambeo 3D soundbar.

“It is a shame CanJam is usually held at March, because we’ll be releasing the speakers in the early third quarter of 2019,” Lim informed me.

“There are 13 drivers within the beautiful bar with the subwoofer built in,” he added, and this got me intrigued, imagining how a soundbar with a Sennheiser house sound would sing.

Shenzen Audio had booked three booths to bring in three different brands – Topping, Matrix Audio and SMSL. These names might ring a bell because they are currently the go-to brands for affordable, good quality equipment.

Focal displayed its new Stelia and Elegia headphones, both looking as beautiful as ever with amazing build quality. The number of people waiting to try them out was a testament of how good Focal’s products are. The Focals were driven by Manley Labs Absolute tube amps, which did the job well. Manley also had a separate booth upstairs where I got the chance to play around with the various settings on the amp.

Dekoni Audio was also at the show floor and I got to chat with the founder, Tal Kocen. He was happy to know I use the TH900 Lambskin pads with my Final Audio Pandora Hope VI headphones which – yes, of course – I had brought along with me. For more conscious consumers, Dekoni also produces a Choice Material which comes in synthetic leather or synthetic suede. They are vegan materials and probably just as, if not more comfortable, than actual sheepskin.

I also sat down with Astell and Kern to try out the SP1000M Gold music player through the AKT5P Gen 2 dynamic headphones. It was hard to stop listening to the combo as everything sounded effortless and analogue.

Just next to A&K, I was glad to be able to meet Andy Reagan from MrSpeakers. As with a lot of other exhibitors did, MrSpeakers had brought its reference-level headphones – MrSpeakers Voce and Ether 2.

“We have a closed back coming soon,” Reagan quipped. Planars or electrostats? “Yes,” he replied.

When he saw me making a face, he gave me the classic, “If I tell you, I’d have to kill you,” line. I guess we’ll just have to keep our eyes peeled on the website around the end of the year.

HeadAmp was also there displaying its Gilmore Lite, GSX Mini, and also Blue Hawaii, a tube electrostatic headphone amplifier which now comes in a new green colour. The fully Class A solid-state GSX Mini, which has barely started shipping, has a balanced out that works even with single-ended sources. Powerful enough for all headphones out there, it competently drove the Hifiman Susvara – one of the hardest-to-drive headphones – to prove a point. The company has more electrostatic amps coming out late this year, apparently one more high-end than Blue Hawaii, and another more affordable model.

Chord Electronics was present and I got to try out its ultra high-end Blu MKII CD player playing through Chord Dave DAC. Anybody looking for an absolute reference system should definitely check this out.

“All our DACs use custom-coded FPGA architecture that allows them to be at least 600 times more powerful than existing chip DACs,” explained Ed Harris, Chord’s marketing manager. “And using the M Scaler allows you to multiply the number of taps from around 74,000 to 1,000,000.” The higher number of taps, the better time domain performance they can achieve.

Over a few booths, what a sight to see JPS Labs showcasing its new Diana Phi and the Abyss AB-1266 PHI TC planar dynamic headphones. Fit for the Abyss was finicky as usual – something well known about them, but once the positioning is just right, they will sing till kingdom come. Now, I’m not one to talk price, but despite the Abyss’ US$7,995 tag, powered through a US$7,999 Woo Audio WA33, they’re well worth the asking price for the discerning listener.

Dr John Moulton aka the “Wizard” was at the Noble Audio booth on the second day; I listened to the Khan in-ear monitors on both days. I like the Khan more than I am willing to admit, they have the best fit for my ears compared to other IEMs.

“The Khan is an example of utilising different technologies all in one product, for example piezoelectric, dynamic and balanced armature driver. That’s a tri-level hybrid technology,” Dr Moulton explained. The Khan might be one of the most optimal implementation of the piezoelectric driver I’ve heard to date, and I wouldn’t discount the possibility of owning one in the future.

Perhaps the quirkiest product shown was the RAAL Exquisite SR1a, the world’s first true ribbon “earfield” monitor headphone. It comes as a system – like the Sonoma, more on that later – and is powered from speaker taps. The system I listened to was driven out of a Schiit Ragnarok integrated amplifier, and while I love how wide and deep the soundstage is, I cannot get over their looks.

Warwick Acoustics brought the Sonoma, another headphone system that came bundled with its DAC/amp. Although they’re electrostatics, they don’t share the same PRO connectors like STAX.

“Normal electrostatic bias voltage is around 500-600 volts, but the Sonoma runs on 1,200 volts. So you can see our concern with people plugging in the wrong headphones into the wrong amps,” said Warwicks’ Martin Roberts. The company will be releasing its Aperio headphone system at the Munich High-End Show in May, and I am very eager to see what other improvements will be made.

In another room, I got to try Mass Kobo amplifiers and Campfire Audio IEMs. Mass founder Masanori Neko-san Masuda was demonstrating his amps through the Final Audio D8000 flagship planar magnetic headphones. I compared it with my own Pandora Hope VI, and while they’re at different levels. I am happy to hear the house sound is familiar.

Moving on, Campfire Audio had the beta program for Equinox – a custom IEM with the same configuration as the Atlas that runs on a single 10mm dynamic driver. At the moment, it is a limited run, so those interested should contact them the soonest. I had a brief listen through the Cayin N5iis music player (review coming soon) and though pleasant sounding, the Equinox isn’t really my thing.

One room was occupied by a newcomer to CanJam. Audiofly is an Australian company that produces IEMs as well as IEM accessories such as wireless and replacement cables. I sat down and listened to the flagship AF1120 mk2, but was distracted by the beautiful quality of its cable. The sound, nevertheless, can be described as neutral and reference-like. The fit was also amazing, thanks to the diminutive size.

There are too many things to write about CanJam and I haven’t even mentioned Sony’s new MDR Z7M2, FiiO’s new music players and IEMs, the new Aeolus and Verite by ZMF Headphones, Rosson (of Audeze fame) Audio Design Zero, Jomo Audio Trinity and Flamenco, In Ear Prophile 8, and many others.

If it wasn’t obvious already, I enjoyed myself at CanJam 2019. All in all, I was impressed by what I saw and am glad there’s such a demand for a whole event dedicated to personal audio. CanJam Singapore 2019 definitely met my expectations and over-delivered its promises.