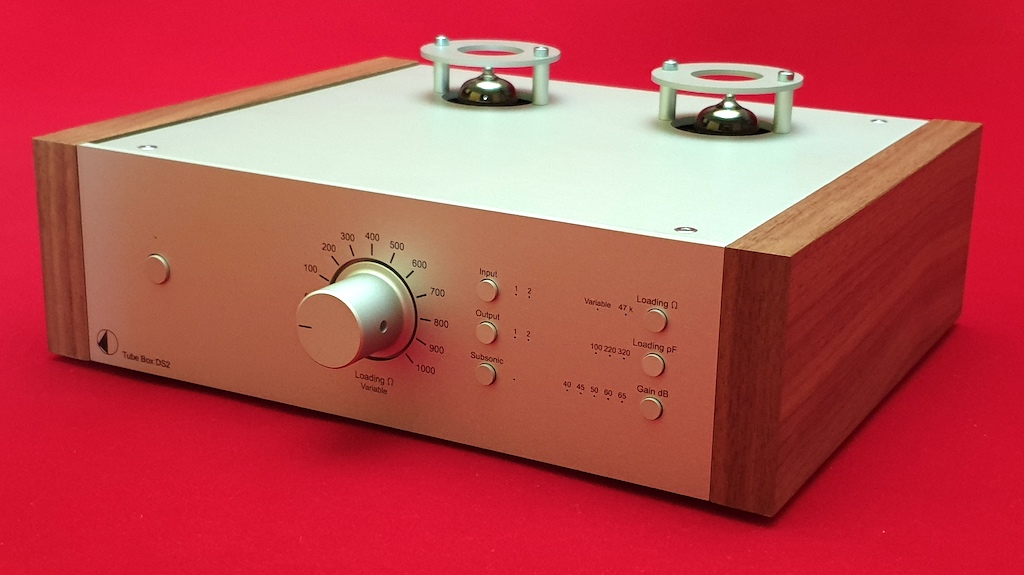 WHEN most of the turntable specialist companies were going broke or limping along in the late 1980s and early 1990s under the onslaught of the compact disc, Austrian Heinz Lichtenegger founded Pro-Ject Audio Systems, focusing only on manufacturing turntables, and with an emphasis on affordability and quality. His passion and belief have paid off handsomely and today, Pro-Ject is in the top ranks of turntable companies; it has also branched out into supporting electronics, including digital!

The component on review is the Tube Box DS2 Phono preamp, which sits at the mid-level of phono stages offered by Pro-Ject. There is a similar product simply called Phono Box DS2, which I assume just omits the tube buffer output of the unit under review here. The Tube Box DS2 is a half-sized box housed in either black or silver aluminium metal chassis, with the option of wooden sides. The review sample was the premium version, and I must say it looked elegant and handsome, although the additional cost is pretty steep.

The Tube Box DS2, which does MM and MC, is probably the most flexible and convenient phono stage at its price point. All settings for optimising cartridge matching are set on the front plate, either via the rotary dial or push buttons, with clear but small lettering. This kind of flexibility to set impedance, capacitance and gain is usually found on phono stages costing many multiples of the Tube Box DS2 and more often than not, requires the user to open up the box to make the adjustments or to turn it upside down. The Tube Box DS2 allows the adjustments to be made from the front panel, so one can adjust by ear as the music is being played. During the review period, I found this to be particularly useful and important as for the first time, I could conveniently tune the sound to my liking.

The Tube Box DS2 also allows two turntables to be connected at the same time, selectable again from the buttons on the front panel. In use, the chosen settings are beautifully lit in blue LEDs. The gain setting, however, is a cycle-through facility and therefore you must be careful when switching from an MC to MM cartridge as you may forget that the gain is at, say 65dB! Finally, there is a subsonic filter which helps with situations of feedback from the turntable.

As I understand it, this is not a true tube design but uses two 12AX7s as the output buffers or in simple terms, to add “tube warmth” to the sound. Both tubes are encased in quality dampening and cooling sheaths, and protected by protruding “roof cases”, giving the Tube Box DS2 a rather unique look. Power is provided by a simple wall wart, a rather disappointing feature at the price point but I guess something had to give.

The instructions that came along were fairly well written but what caught my eye were the words: “You cannot destroy anything when experimenting with the different settings. What you like best is right.” Most encouraging!

SETTING UP
Getting the Tube DS2 ready for play was a breeze as everything is clearly marked and easily accessible. The small size and relatively light weight also helped.

I had planned to use a number of my MM and MC cartridges for testing out the capabilities of the Tube Box DS2 but alas, as the unit was fresh out of the box, a lengthy run-in process had to be done.

After almost 10 hours of play, not much change was detected from the initially dull sound that lacked treble extension. In despair, I resorted to leaving the unit on 24/7 standby mode and playing a few hours each day.

It was only after two weeks that the sound opened up and treble notes started to have some airiness and shimmer. Only then did serious auditioning take place, with my selection of jazz vocals, instrumentals and classical as well as audiophile presses from Sheffield Lab, etc.

LISTENING
Right from the first LP played during the serious auditioning session, it was abundantly clear the Tube Box DS2 had the lush and warm type of analogue sound that many like and believe to be what vinyl should sound like. The bass was ripe and plush but had only average extension.

What struck me most was the very excellent midrange and upper bass where female and male voices reside. Playing Carol Kidd, Eva Cassidy and Whitney Houston revealed a very natural presentation of female vocals with great clarity and warmth to the voices. Similarly, male voices were very well portrayed. Frank Sinatra was suitably clear and yet slightly gruff in his recording with Count Basie, Sinatra at the Sands. The original cast recording of the Phantom of the Opera sang with excellent diction and emotion.

But, and it’s a big but, I noticed that despite the fairly long hours of run-in, the upper notes seem to be slightly recessed and failed to light up the corners of the soundstage. This was most noticed on Count Basie’s big band playing with Sinatra, as the sparkle and air of the band instruments seemed less than what I am used to.

Several more LPs further confirmed this slightly recessed upper notes and perhaps even accounted for the very low level of ticks and pops exhibited by the Tube Box DS2. As a result, brass notes seemed less brassy and edgy than what I like.

However, if one were to sit back just to enjoy the lush and warm sound coming from the speakers, the Tube Box DS2 will ladle it out in spades. There is absolutely no fatigue despite long hours of listening and to its immense credit, the excellent upper bass meant that the swing and rhythm of music will keep the listener shaking his legs and bopping his head away. Indeed, this must be the forte of the Tube Box DS2, being lush and warm and yet keeping the rhythm lively. And for most without a reference phono in hand, the slightly recessed upper registers will likely not be noticed.

I compared the sound of the Tube Box DS2 with the similarly flexible and priced ifi phono (the first version) and the considerably more expensive Whest Two.2. With the settings set as close as can be, the ifi phono clearly restored the upper notes but lost out on the warmth and lushness. It was better as one would expect, in showing the leading edges of notes and was more dynamic when the music required it. The Whest Two.2 was simply better in all parameters but still not as lush and warm as the Tube Box DS2, but portrayed music in a more coherent and calm manner that reflected its price point.

Lastly, I tried various footers and support platforms for the Tube Box DS2 and found that it sounded its best with a heavy solid wood platform. For those interested, the Tube Box DS2 was auditioned using a variety of MM and MC cartridges, namely the Shure 44-7 with 55e stylus, Audio Technica AT7V, Nagaoka MP500, Denon DL304 and a rebuilt Dynavector 23r. Turntables used were a Technics SL1000 and SL1200mk3.

THE LAST WORD
The Pro-Ject Tube Box DS2 proved to be an enjoyable listen once the initial run-in was completed. It made every recording sound wonderfully lush and warm, like a beautiful sunset.

Voices were presented naturally and an overall non-fatiguing sound meant that the Tube Box DS2 would be very much at home in many modern systems or those seeking the glorious sounds of vinyl at an affordable level.

The very convenient flexibility to enable matching to cartridges is unheard of at its price point, although this might lead to obsessive twiddling with the settings!