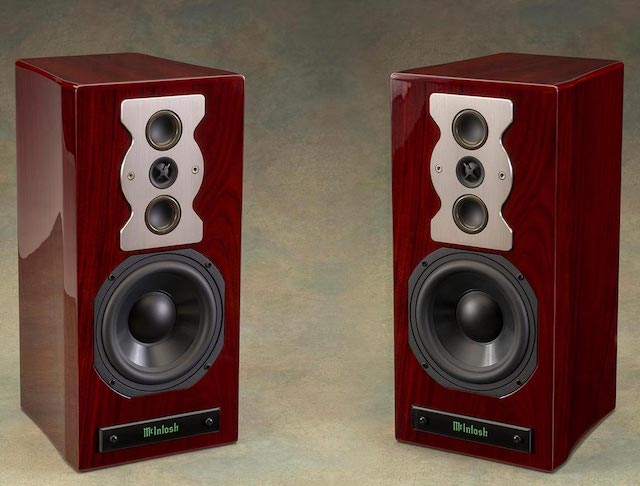 McINTOSH Laboratory hardly needs any introduction, being an icon of the American hi-fi industry. The company celebrates its 70th anniversary this year, having earned the highest reputation globally. The iconic blue watt meters on its power amplifiers today represents a symbol of high fidelity and reliability!

I have been a faithful user of the MC402 power amplifier for more than a decade, and while many fine amplifiers have come in for review, I have stayed resolutely with it.

This review, however, is from a product range for which the company is less known – loudspeakers. The XR50 bookshelf is the smallest and lowest-priced speaker offering from McIntosh.

The review pair sported a red walnut finish, which is attractive in an understated manner. The cabinet does not have a rectangular footprint but tapers to the rear. The three-way ported design uses four drive units – a tweeter, two midrange drivers and a woofer – in a vertical array. Both the midrange and tweeter drivers are made of titanium while the six-inch woofer features an LD/HP polycone material.

The speakers are rated to handle 75 to 300 watts of input power with a nominal impedance of eight ohms. I should point out the very low efficiency of 81dB, which potential buyers may want to consider.

Despite having four drive units, each speaker is relatively light at 8.9kg and a departure from other manufacturers’ current approach of very heavy and inert cabinets. The XR50 is relatively inert but does exhibit box resonance when knocked on. I believe this is the design approach and not a cost-cutting measure.

LISTENING
The XR50s were toed-in such that the line of sight crossed just in front of my listening position; they were eight feet apart and 10 feet from the listening position, well clear of wall perimeters. The speakers were easy to position as I only needed to make very slight changes to achieve good imaging and sound density at the listening position. Interestingly, I found the speakers to prefer a wobbly ball-bearing stand approach instead of the usual rigid spikes.

Right from the first track, the XR50 showed why it often pays to use equipment from the same manufacturer. The result was balanced, very natural and quintessentially McIntosh. The McIntosh combination was one made in heaven or more correctly, in the McIntosh factory! The sound was warm and uncannily lifelike, displaying many characteristics that revealed the human factor in the music-making process. Intake breaths, which more often than not are distractions, became an integral part of the music.

In spite of the diminutive size relative to my reference speakers, the bass output was bigger and deeper and more akin to what I know of in live performances. For example, double bass bowing and plucking on Harry Allen’s New York State of Mind had tremendous presence and furniture-vibrating qualities. I must add, this was reproduced in a most natural manner.

Balancing this bass quality is a midrange and treble output of the highest quality. Voices were very beautifully portrayed with presence and articulate clarity such that words were easily heard. Diana Krall on Turn Up the Quiet was eerily present at her throatiest best, as was Russell Watson singing Nessun Dorma. Johnny Cash on his American Recordings sounded gruff and deep as it should be. Shimmer and decay in notes were delightfully portrayed with plenty of air and space to instruments and voices alike.

Fourplay’s Chant track had that feel-in-the-body kind of weight, something that my reference speakers cannot match. David Roth’s Pearl album is a classic in recorded quality of both voice and acoustic guitar naturalness, and the XR50 clearly showed these. In fact, with acoustic guitar, the XR50 is truly outstanding as it was highly revealing of not only the plucks of the strings but the ambient sound of the guitar sound box in an attractive way. Needless to say, I really enjoyed the way the XR50 rendered the voice of Ella Fitzgerald.

In my very large listening room, the XR50s were able to fill the space with a big-boned sound, which is quite amazing for small speakers. The soundstage was huge from left to right. and had tremendous depth of image. Instruments and voices were always placed accurately in a three-dimensional sound-field such that the illusion of real musicians being in the room was very palpable. In this aspect, I believe this XR50 is the best speaker that has ever graced my listening room.

Hence, large scale orchestral music such as Beethoven’s Symphony No 9, performed by the Chicago Symphony Orchestra under Sir George Solti, fared better than expected considering that the speaker’s dimensions. However, size did matter, I guess, when trying to reproduce a 100-strong orchestra playing crescendos, but the XR50s did not fail by much and unless you really want full-scale orchestral dynamics, these speakers will do nicely!

Obviously one cannot expect such diminutive speakers to do all that one wants. In terms of sheer attack, speed and dynamics, the XR50 was short of what my reference Magneplanar 3.6 can do. Voices, too, seemed slightly smaller in sheer scale and when required, the size and scale of an orchestral crescendo eluded the XR50. But with most music, these were simply wonderful speakers to listen to.

Late in the review process, I paired the XR50s with my very powerful vintage Sansui integrated amplifier just to assess how they would perform with a non-McIntosh amplifier. While the sound remained very good, some of the special synergy the XR50 had with the MC402 was lost. Most noticeably was the presence factor, with voices receding somewhat, while the airiness seemed much less.

THE LAST WORD
While McIntosh is not that well known for its speaker offerings, the XR50 proved to be a real gem, with great synergy when paired with my MC402, as it should be. Its sound quality belies its diminutive size and on sheer bass output, it’s a tour de force.

Overall, a fantastic speaker which, if I may say so, every McIntosh amplifier owner should audition. They may end up getting a very big slice of sonic heaven. In the time the XR50s were with me, I got that, and was most sorry to return them to the distributor. Hopefully, my next encounter will be with the bigger brother of the XR50.