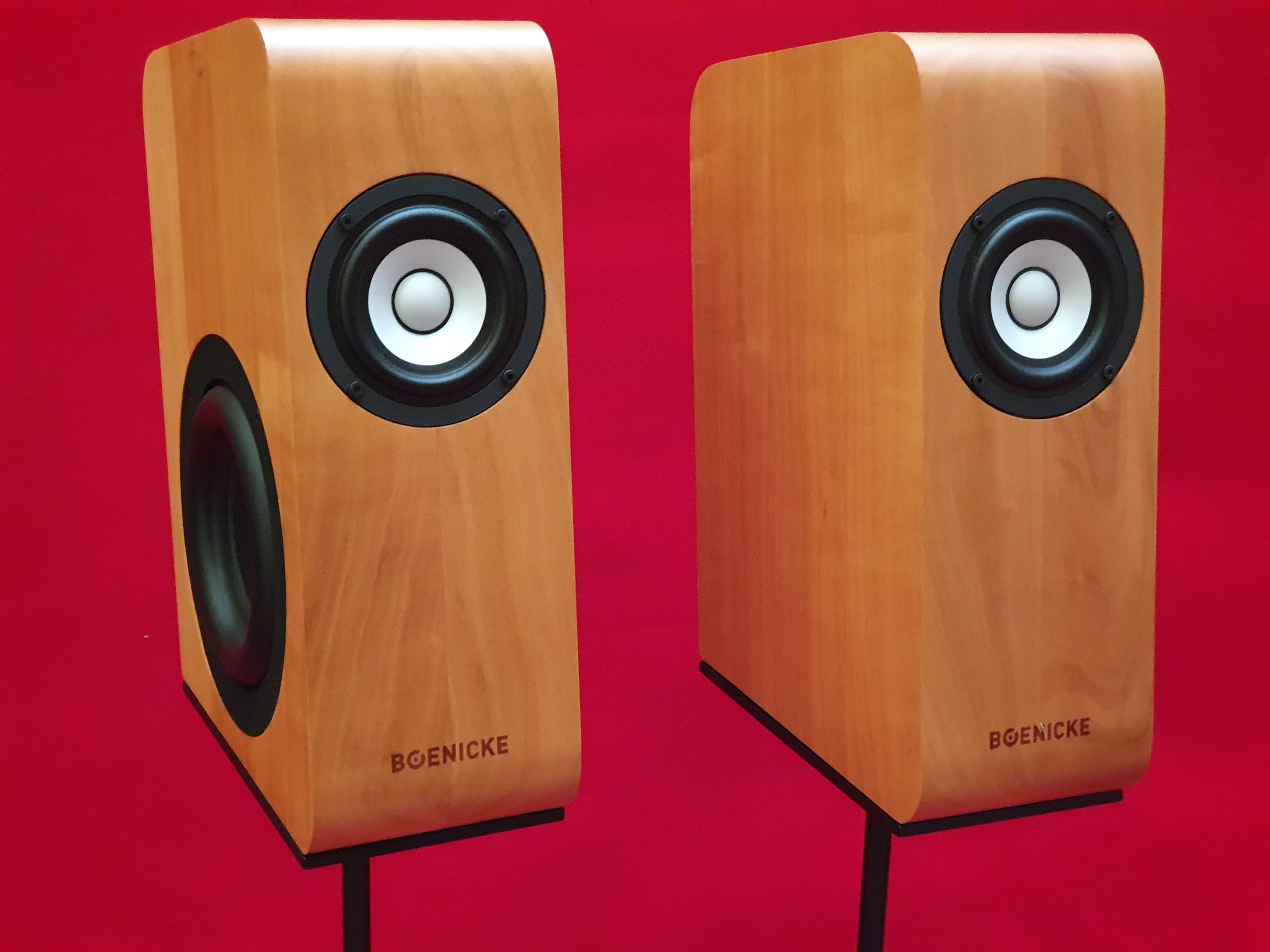 + More expansive stage than their size would suggest; musically cohesive and tonally just right; they get out of the way and into the heart of the music; punchy, refined, well-paced and very detailed; fit and finish ooze class, as you would expect.
– Muscular amp and a high quality signal feed mandatory to extract their best; not cheap, certainly not!
Sound: 9/10
Value: 8/10

APPEARANCES can be deceptive, we know this… and yet, sometimes, we shrug off lessons from the past and give in to inherent prejudices. Take, for instance, these diminutive standmount/bookshelf speakers from Boenicke Audio, the W5. It’s one of four models from the stables of this Swiss company, and the only non-floorstander. These speakers have been in the market for a few years now, but it was only this year that Boenicke appointed a local (Malaysian) distributor.

First, the W5’s size, which is a mere 2.8 litres of space per cabinet… then, there’s the tiny three-inch driver in front. So, first impressions would be, “What, is that all?” But hold on… closer all-round inspection reveals a side-mounted five-inch driver on one side of the cabinet, a tiny tweeter at the rear and a rectangular port. On further reading, it appears that the last is the vent for a transmission-line design. (Boenicke has confirmed it is not a transmission line but a bass reflex design, although earlier models incorporated this in the bigger cabinets.)

However, even at first glance, the quality of the design and the cut of the cabinets are impressive. There’s the real-wood finish (none of the veneer-over-MDF nonsense) and the attention to detail. Note, for one, the name of the company etched in front.

Boenicke is a Swiss company, headquartered in Basel, where it was founded by one Sven Boenicke in 1999. He has acoustically designed each model in the range, and his philosophy has been simple and straightforward from the beginning – to “do things that no one else does.” Go to the website and reach the “About Us” section to understand what drives the him and the company.

Of course, this being a Swiss product (and an entry-level one at that from the company), it would be perceived as affordable only if one doesn’t consider a Rolex watch at this price particularly expensive. But what can you do with a watch, eh, apart from wearing it to show off your “status”. Hi-fi, at the least, stokes the audiophile’s deeper sensitivities.

The side-mounted woofer is a long-throw unit tuned to 50Hz without a crossover, and the front driver, which has a first-order high-pass filter and an 8cm parallel spiral resonator, has been made to Boenicke’s specifications. Then, there’s the rear ambient tweeter for off-axis response. Apparently, the drivers are sourced from a Taiwan company called Tang Band, which has been around for more than two decades – I’m told they’re the darling of the DIY crowd.

The W5 presents a four-ohm load, with a sensitivity of 83-86dB depending on frequency… so, make sure your amplifier has what it takes.

Internal wiring uses silk-wrapped high-frequency stranded Litz cable, and premium WBT Next Gen binding posts are provided, on which you can use banana jacks or spades (I won’t recommend bare-wire).

The W5 sent for this review was the basic, if you want to call it that, version. There are two costlier versions, the SE and SE+, with upgraded components and heftier price tags, but we’ll not get into this. The cherry wood featured here is the cheaper finish option. You can also order them in walnut, oak, ash or core ash.

Each cabinet is laughably light, at about 3.5kg, and measures 104mm wide, 231mm deep and 293mm tall in front. The cabinet is designed with a backward tilt, no doubt to time-align the higher frequencies. The optional metal stand, which brings the height up to 747mm, is a unique design and requires self-assembly – it is also flat-packed in one of most organised ways I’ve ever seen. Learn, Ikea!

If you want the speakers on a desktop, there is a custom-made spring suspension to isolate them from the surface. I initially sited the W5s on my own stands, before affixing them to the dedicated stands. Note that these are not like conventional stands – they lock on with the cabinets on the top platform but will sway vertically if nudged.

LISTENING
I first listened, if only casually, to the W5s in the showroom, and was admittedly a bit dismissive… not enough bass, was my reaction, how can such a small box deliver? Perhaps it was the partnering amp there. So I made some polite noises. Later, when I was tasked with taking home a pair for review, I wasn’t expecting any ear-shattering revelation from the W5s. I had bracketed Boenicke in the “lifestyle” category – sweet to look at, high on WAF, and at home in a variety of interior layouts and designs.

Right away after getting the W5s up and running at home, I realised how wrong I had been, and how presumptuous! In my listening room, I heard these speakers in a totally, er, new light. My immediate reaction – how did something this size generate such a “large” sound, and was so coherent? My assumption about the W5 being more a “lifestyle” design made a quick and sheepish exit through the nearest window.

Yes, bass it has, unless it is Stygian lows you seek; the W5 appears to stretch the laws of physics, reaching a bit lower than any cabinet this size has any right to, and not losing control in the process – these tiny boxes are tight and fast. Yet, the W5s are tonally very even, the treble sounding refreshingly open and natural, and the midband possessing nothing to evoke any suggestion of colour – what one hears is as good or otherwise as the source signals being fed into the speakers.

While I appreciate these qualities, it was the sound-staging dimensions the speakers conjured that impressed me more than anything else about them. True, my Magnepan panels sound bigger, but they have physics aligned with them. The W5s occasionally seemed to be working “out of the box”… if you get my drift.

I placed the W5s about five feet apart, sitting about six feet away at the sweet spot – with some toe-in, I got the vocals dead centre, but they never sounded “small” or limited in projection, as with some small cabinets. With vocal-centric and acoustically-driven recordings (jazz, folk, etc), the drums, bass and strings were precisely positioned and layered to effect a natural and “live” feel. This was observed with much of the jazz recordings I played… solo instrument parts, say a saxophone, trumpet or guitar, seem to take a step forward to draw the listener closer.

There were times when I was startled to hear subtle parts extending from the space some inches beyond the cabinets – this was, of course, dependent on the recordings, but that the W5s could project them in a such a manner impressed me. With the Maggies, one is of course visually aware of the imposing panels and know where the sound is emanating from… but the W5s had the ability to physically “disappear” while projecting a sonic stage that quite deep and wide.

The Boenicke website makes no mention of how the cabinets should be oriented – with the side-mounted woofers on the inside or out. Initially, I set up the speakers with the woofers on the inside, and was already impressed. However, when I switched cabinet position so that the woofers were on the outside, the bass was better defined and more supple, and the sound stage opened up – the speakers breathed more openly and freely this way. If you’re going to place the W5s on a shelf and use them in “lifestyle” mode, I guess this would matter less… but for serious “hi-fi” sessions, and in open space, the difference in projection and dimension is significant.

The top of the speakers, when the cabinets are place on stands, is about 30 inches from the floor. My mini-sofa is about 15 inches from the floor, so I was comfortable with the W5s’ projection… at no time did I feel the treble to be intrusive. The ambient rear tweeter may have something to do with the big stage, but seeing that the speakers were about three feet from the wall behind them, I wonder to what extent they impacted the overall sonic landscape. Very few speakers give their best close to the rear wall, and I suspect the W5s will need at least a couple of feet of free space at the rear and side to attain effective sonic imagery, width and depth.

In a small-to-mid-sized room, say between 150 and 250 square feet, these things will rock. Whatever the music I played through them, the W5s were unfazed… and they went loud without sounding harsh. It’s a refined, detailed and musical sound that they reproduce, and one would expect nothing less for the price. I recommend them with their own stands, which appear to improve solidity and detail in the lows.

THE LAST WORD
The W5s aren’t the easiest of speakers to drive, nor are they unfussy. And when one also factors in the quality of partnering equipment they demand for maximum performance, the cost of ownership goes up by quite a bit.

So, if you intend to use the W5s merely for background music applications, you will not be extracting their best qualities. But place them in the right environment – on the matched stands, driven by a high quality amp and set up properly – and you may begin to ask why you need bigger speakers.

Do explore the Boenicke website, and click on the W5 gallery – right at the end, there’s a little tongue-in-cheek photo of a high-end system in a living room, fronted by a pair of floor-standing Wilson Audio speakers… at their side, the W5. Make what you will of it!

If your budget is generous and you have listening space constraints, I highly recommend the Boenicke Audio W5… these are the most impressive small speakers I’ve heard in a long, long while.