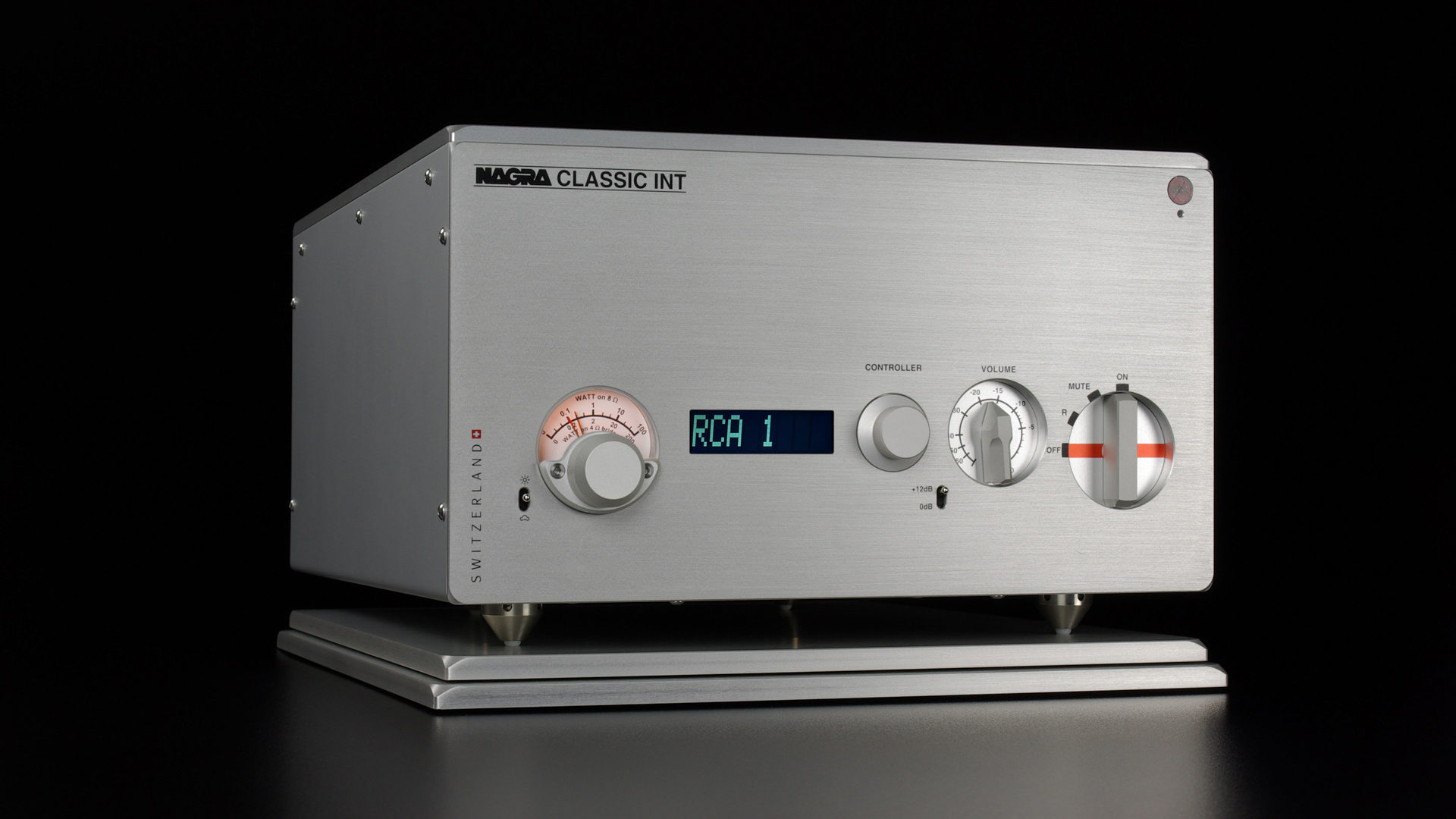 + Marvellous sound, even if a little cooler in approach than some more emphatic-sounding alternatives; classic, quality-oozing Nagra build and looks.
– If you expect an expensive amp to resemble a piece of artistic sculpture, this ain’t it; comes at a price, not unexpectedly; power cord believers may be disappointed with the nondescript freebie thrown in.
Sound: 9/10
Value: 8.5/10

IT is not often a component with as revered a name and reputation (and daunting price!) as that from Nagra makes its way into my home system for evaluation. This highly-regarded Swiss marque first came to fame in the recording side of the music and movie sound reproduction chain (“Nagra” itself meaning “will record” in the Polish language) before entering the consumer market in the late 1990s with electronics which have garnered a solid reputation and high level of desirability with the upper echelons of the audiophile crowd.

The Classic Integrated amplifier tested here (just “Classic”, henceforth) is Nagra’s current entry-level offering. Even so, the asking price in Malaysia is about on par with the least-costly compact SUV sold here that I am aware of. It is a Class AB design which can output 100 watts RMS into an eight-ohm load, per its manufacturer’s published specifications.

One can’t fail but to be impressed with the fit and finish of the Classic, which follows the brand’s established practice of using bolted-together thick metal slabs to form the chassis, with sparse but multi-functional controls on the fascia, including a really cool volume control which feels more like a precision instrument dial, and the brand’s must-have throwback VU “modulometer” for showing the output power of the amp when in use.

Nagra has gone for the industrial, rather than the artistic, look with its Classic line (no pyramid-shaped chassis offerings in sight so far) so the amp takes the shape of a square box, albeit a very solid one which, with its superb metalwork, manages to look somewhat more elegant than such a 277 x 395 x 174mm brushed metal unit has any right to. It weighs a hefty 18kgs. Simplicity never goes out of style.

The Classic thus comes in the same form as the Classic Amp on which its power amplifier section is based. However, the preamplifier section does not replicate the tube circuit of the separate Classic Preamp but is a customised solid-state design, so, no, this is not a hybrid integrated amp.

SETTING UP
The manual suggests that the best way to place the Classic is on its optional dedicated VFS L vibration-free support. Not having this accessory on hand, I placed the unit on the floor, lifted off by three Finite Elemente Ceraball supports under an MDF board, which I thought worked rather well. The supplied power cord was not much to look at, but I did not use it as it would have required an adaptor for its non-local plug. I did not use any madcap-priced aftermarket cords in its place, though, selecting one which looked roughly similar in gauge.

The Classic accepts speaker cables via two different sets of connections: spades (where they’d be connected via Cardas CPBP terminals) and banana plugs. I used the latter for the most part as I felt the Gotham and Symo cables I had, which were banana-terminated, just gelled well going into the Spatial M3 Turbos and ancient (but still highly capable within its limitations) Apogee Centaurus Minors, which were the loudspeakers which saw the most action with the Classic during the tests. That the speaker cables were also Swiss-made was purely coincidental.

Source components may be connected via RCA terminals (four sets) and there is also provision for one set of balanced XLR terminals. The preamp section may be configured for 0dB or for 12dB of gain. In the context of the system with the Spatial loudspeakers, I preferred not to switch in the gain but to turn the volume dial up to compensate, but I preferred the contrary approach when driving the Apogees. It proved very difficult to tell if there were any downsides in switching in the additional gain as no obvious artefacts struck me, apart from better results when the gain matching was more appropriate for each configuration.

A basic plastic remote handset enables operation of the Classic from one’s listening chair. It is perfectly functional but not particularly luxurious, being noticed all the more so after one has savoured the feel of the dials, toggle switches and controls on the fascia of the amp.

LISTENING
Not to put too fine a point to it, the sound of the Classic was simply marvellous. You know you’ve got something special on your hands when your loudspeakers enjoy a noticeable elevation in performance over your regular amps (and you hadn’t felt that they had been in any way noticeably deficient before).

With the Classic, both of the test speakers produced more focused images with superb clarity and audible detail, better telling me how good (or otherwise) my source material, and components and their setting up, had been. I heard as accurate a rendition of timbres of voice, string and brass instruments and their musical textures as my experience told me was truer to how they sounded like in real life, within the limits of a recording and reproduction chain. Those vocalists and instruments which had been faithfully recorded had a quality that conveyed more of the passion and energy the gifted artistes and the technical crew had hoped would be not just heard, but experienced, in their recordings. Even a simple acoustic guitar recording yielded plucks, body resonance and decay that had that bit more of a truthful ring.

The Classic was not overtly powerful or explicit in presentation but one does get a level of panoramic soundstage with believable depth and presence when they were in the recordings – the Damien Rice O and live Chick Corea Akoustik Band albums were just exquisite.

Treble purity was excellent, sounding free of grain and any artefacts like hiss or sibilance, again save where one perceived them to be part of the recording (or generated by the other components used!). The midrange sounded unadulterated, the Classic just seeming to be less in the way in recreating the sounds of individual instruments which, in a string quartet recording, could be picked out of the precisely defined soundstage as though it was physicality present with the music.

The Classic had no problems doing the macro stuff expected of a high power solid state amplifier (with the caveat that I don’t have large demanding loudspeakers, nor listen in an environment where amps used are compelled to perform constantly close to their design limits), yet at “only a 100W”, the Classic felt like it was utterly unflappable, bass being fast, punchy and tuneful, with subtle nuances, as well as dynamic weight closer to the limits my loudspeakers (with subwoofer in tow) could render.

With prolonged listening, the Classic seduces with its sonic purity and ability to help create a wholly immersive listening experience, getting on with delivering a level of smooth, seamless power, firmly controlling the loudspeaker drivers with headroom to spare. Hi-fi is an illusion engine, and the less you hear or feel the engine, the more emotional the ride is.

The Classic’s sound could be perceived by some, especially old-school “tube sound” aficionados, to have a leaner harmonic presentation. I do confess to having a preference toward perhaps a breathed-on degree of midband richness, better than it being anaemic and sterile sounding, or having a mid-bass and lower midrange that can make make some recordings devoid of weight. I never felt this with the Classic, however, and felt its presentation in the end to be actually more convincing.

THE LAST WORD
The Classic cannot readily be described as affordable (in the normal sense, as understood by those of us in the mere mortal wage-earning bucket), but I have no qualms saying you do get what you pay for in terms of sonic performance, build quality and pride of ownership.

Excellence doesn’t come cheap, and if you are among the ladies and gentlemen who have the wherewithal to acquire and place this amplifier into an exquisite system which allows its qualities to shine, I am envious of you. Way recommended!

SUJESH PAVITHRAN adds: I had the Nagra Classic Integrated in my system for a couple of days because I was keen to hear how it would interact with my Magneplanar MG1.7i panels. Would it have the muscle to drive these speakers? Well, my doubts were dispelled almost immediately. The Classic drove them effortlessly – it was everything I was getting from my resident (and more muscular in the context of watts) Accuphase E-470 integrated, and more. I discerned more detail and better definition of the spaces between various instruments and vocals, and a finer fleshing out of bass. The sound stage was deeper and airier, and more precise in the placement of various elements in the recording. There was little to distract me from sheer enjoyment of the material being played. Would I buy the Classic – yes, it’s the first on my shopping list when/if I get a windfall in future!