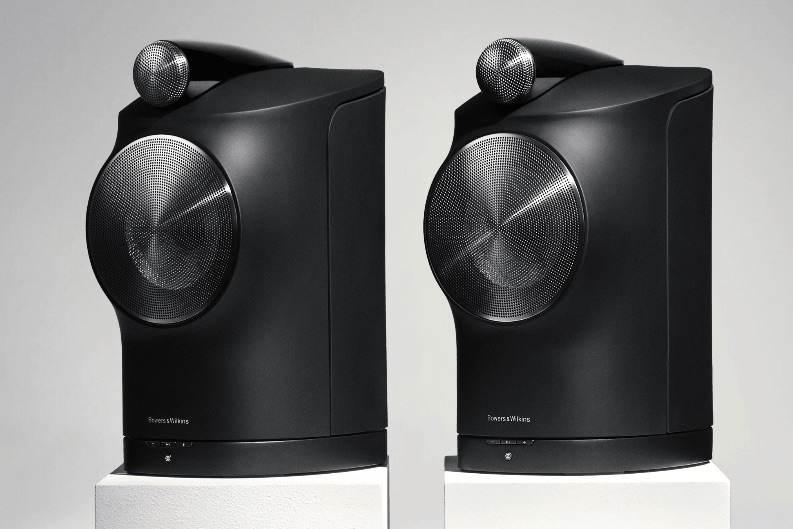 BOWERS & WILKINS has been a venerable brand of loudspeaker for many years, creating flagship models such as the 800 series which grace the likes of Abbey Road studios. Its recent ranges of passive speakers have also met with some acclaim, brandishing advanced B&W technologies such as the dimpled flow-port, Continuum speaker cone materials, and carbon- and diamond-coated tweeters set on their own pods, isolated from the bass drivers. Such technologies have resulted in award-winning passive loudspeakers.

In parallel, B&W was one of the pioneers of making “hi-fi” more accessible and stylish in the form of active speakers such as the award-winning Zeppelin as well as headphones such as the P7 and PX. In doing so, B&W has brought a lot of these technologies as well as developed expertise in active speaker design, DSP, wireless networking and streaming, to a new range of wireless speakers called the Formation series.

Active speakers are not new to me – I owned a pair of KEF LS50 Wireless and have reviewed on this site the lovely Dali Callisto 2C. I also have been a happy Zeppelin Air user for some years now. Active speakers represent in many ways a much more optimal way to achieve our hi-fi goals – matching drivers, crossovers and speakers have always made more sense to me as an electronic engineer and this is evidenced in how active speakers have all but taken over monitoring duties in most recording studios. Marrying this to wireless networking and streaming technology makes these products much more home-friendly.

The Duo represents, at present, the top of the Formation line, promising real “hi-fi” performance, coupled with convenience, in two boxes. The units are beautifully finished – the review samples were in a fetching white, in a sealed box (curved to prevent standing waves inside) made of a composite material developed to be self-damping and resonance-free.

The 6.5-inch mid/bass units feature B&W’s Continuum drivers and sit behind handsome perforated metal grilles which are not removable. The high-technology one-inch dome tweeter is housed in a decoupled pod on top with the distinctive bullet-shaped housing said to “load” the tweeter for optimal performance. The units are quite dense – the carton that the speakers came in weighs 26kg. Not surprising that it also has amplification in each of the units.

The review samples also came with a matching pair (in a matte silver finish to match the bottoms of the white speakers) of mono pillar stands which can be bolted to the underside of the speaker. Although these stands are pricey, I think the aesthetic and sonic benefits make them well worth considering.

In each enclosure, there are two 125-watt Class D amps powering each of the driver units, along with associated DSP to execute the crossover and processing for time/phase alignment as well as the wireless and wired networking. On the rear, there is a “Telefunken-type” mains input, an RJ45 network port and a USB port for service only. On the front, there is a multi-function button for set-up, and to show status, volume controls and a pause/play button.

SETTING UP
Getting them up and going was reasonably straightforward using the B&W Home app, identifying the speakers as ready to set up, choosing your home wireless network and entering credentials to join your chosen network.

Once on the network, the Formation Duo present themselves as Spotify Connect-enabled speakers, as well as Airplay 2-enabled speakers for those with iOS devices. But most interestingly, the speakers are also Roon endpoints and were easily set up on my home Roon network. I did most of my auditioning with Roon. The speakers top out at 24-bit/96kHz PCM data, and does not handle DSD data (this will have to be transcoded, which Roon handles seamlessly). The DACs in the units also decode MQA, which works well when streaming MQA tracks from TIDAL via Roon, or streaming locally stored MQA tracks.

B&W Malaysia did not supply the Formation Audio unit which would enable analogue devices to connect to the speakers so I was unable to test the speakers with analogue sources.

Testing was done mostly with Roon using uncompressed digital files, but I also tested them using Spotify Connect and Airplay 2.

Setting up on the supplied stands was straightforward – I sited them about three metres apart and 3.5m from my listening position, slightly toed-in, in free space. The sealed box design also offers additional flexibility should you need to site it near a wall.

Out of the box, I used Airplay2 from my iPhone to get some music playing and to get the units warmed up. I don’t know if the units were extensively played before-hand, but the units did not seem like they needed an extended break in period.

LISTENING
First impressions were positive – a big and expansive sound stage was painted, and even with compressed material from Apple Music, a very enjoyable sound was presented, with fine rhythmic “foot-tapping” quality to the bass line on Dave Brubeck’s Time In (Apple Music Adaptive AAC streaming). Browsing through my Apple Music library was an enjoyable spree, the speakers taking on all genres and presenting a very detailed, rhythmic and enjoyable rendition.

Especially of note was the anchoring of female vocals in the centre of the soundfield and the texture of the plucked double bass (Ilona Knopfler, Live the Life, Adaptive AAC streaming). Vocals had fine projection, with exquisite handing of sibilants and the “air” surrounding the singer. The double bass showed lovely texture, with the leading edge of the plucked sound having fine articulation – one can almost visualise the singer and the bassist.

Switching to Roon and uncompressed material, I lost myself again in my regular repertoire of test tracks, which I use to benchmark the equipment that crosses my listening room. Of particular note was playing back the digital download of Miles Davis’ Kind of Blue (24/192 FLAC from HDTracks, downsampled to 24/96 by Roon). For those who know the history behind this seminal recording, it isn’t truly a stereo recording. It was actually a three track recording, and by convention, the centre track is mixed into the left and right channels to make for the “stereo” mix.

The purist way to listen to this album is actually with three speakers – Left, Centre and Right. The most accessible way to do this today is actually to purchase a multi-track SACD pressing of Kind of Blue and play it using a SACD player with multi-channel output to a three-channel amp (usually an AV receiver/amp) to drive three speakers. This paints a very solid centre image of Miles Davis and Paul Chambers flanked by Bill Evans/Wynton Kelly, Cannonball Adderley and John Coltrane with Jimmy Cobb on Left and Right. Playing the stereo mix through the B&W Formation Duos came very close to this experience, with an almost a holographic projection of Miles and Paul in the centre. Of note, too, is that there is distinct layering and depth/projection in the mix.

Switching to Macy Gray’s Stripped on Chesky Records (24/96 FLAC from HDTracks), the binaural recording was a joy to behold, with the speakers able to do justice to the recorded ambiance, which placed her vocals and her bandmates in an utterly believable soundfield. Again, the texture and speed in the bass were apparent, but equally beguiling was the midrange which showcases Ms Gray’s distinct vocal style, which made for a thoroughly enjoyable listening session.

Next up was Go-Go Penguin’s Prayer on a Humdrum Star (24/96 MQA on TIDAL) which is a test for deep bass – although the very deepest notes were not really present (compared with my reference speakers, the Q Acoustics Concept 500s), the Formation Duos had presence and power from 50Hz upwards, the bowed bass again showing real texture and solidity. I then put on London Grammar’s Rooting for You (24/44.1 FLAC from HDTracks) to test for bass texture and extension as well as vocal projection. On lesser systems, the powerful bass tends to overwhelm the projection of Hannah Reid’s luminescent vocals, but the Formation Duos handled this track with aplomb, her vocals floating in an ethereal fashion over the other instruments.

Time to rock and roll – Steely Dan’s Aja was up next (Single DSD rip from SACD). The Formation Duos showed again their good sense of rhythm and timing, especially on Josie. Even in a complex multi-track production, the speakers showed the fine ability to tease out the threads in the mix, but never in a clinical fashion. Next up was Dire Straits’ Love Over Gold (16/44.1 Remastered CD Rip) – the opening track, Telegraph Road, was painted in an expansive sound stage, with Mark Knofpler’s guitars set nicely with the clicking drum opening and ringing toms above the guitar plucks – superbly enjoyable.

Rounding out the listening was a spin through one of my favourite set of classical symphonies – Herbert von Karajan’s 1963 rendition of Beethoven’s Symphonies for Deutsche Grammophon (TIDAL MQA stream). The precise soundstaging was apparent, with the orchestra laid out, and the sections clearly drawn. Scale was excellent, with a good sense of the power of the Berlin Philharmonic under the control of maestro Karajan.

Use was generally fuss-free – there were a couple of wireless networking glitches, but they resolved themselves – perhaps there is still a little more debugging needed in B&W’s wireless mesh networking protocols.

Comparisons
– vs KEF LS50 Wireless
As a former owner of a pair of KEF LS50 Wireless speakers, I have to place these B&Ws as superior in almost every way – larger scale, more slam, deeper and better articulated bass. But the KEFs have a slight edge in three aspects – one, even more precise soundstaging (albeit with less scale); two, the ability to adjust the EQ to suit speaker siting; and finally three, more flexibility in terms of connections out of the box (USB, optical, analogue in addition to streaming inputs). But the LS50W are almost half the price, and this is a significant difference. If your budget does not extend to the B&Ws, the LS50W are an excellent choice.

– vs Dali Callisto 2C
Recalling my notes from reviewing the Dali Callistos, the Dalis definitely have a much warmer sound profile than the B&W and are certainly not as precise. However, they are quite “approachable” and probably are much more forgiving of poorer source material. Careful auditioning would be essential to assess which of these speakers would suit your ears and room.

THE LAST WORD
B&W has a great speaker here, dressed as a lifestyle product – it ticks all the “hi-fi” boxes, but also is superbly musical. That it offers wireless streaming as well is a bonus.

I have two reservations – the first being that although you can happily use it with Airplay2 or Spotify Connect (and that it sounds good with compressed material is a great achievement), but to extract the full potential, you would need to use it with Roon, which is a further investment of US$500 for a lifetime licence. In addition, a subscription to TIDAL HiFi would also allow access to MQA tracks which sound excellent on this (as well as the Callistos). The second is the price of these speakers, which at RM21,688 for a pair with the stands, is somewhat over the odds given the already premium pricing in US dollar terms. For this sum, there are plenty of alternatives, albeit without the elegance of a two-box solution.

If you satisfy the first condition and have no qualms on the pricing, I heartily recommend a careful and extended auditioning. Note that I recommend you get the stands with the speakers to hear them at their best.