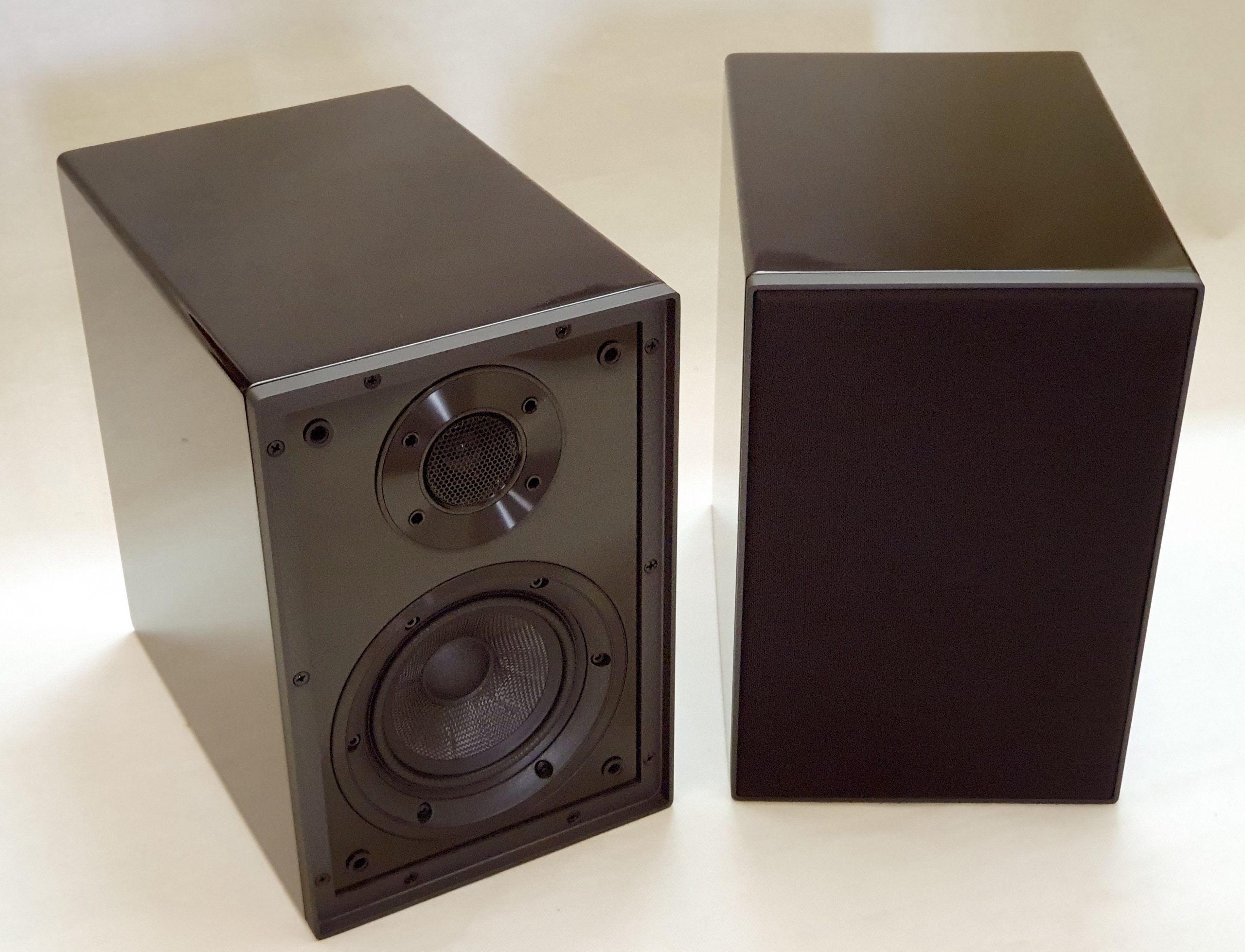 + Impressively cohesive top-to-bottom sound; open midrange, with an open top end; good pacing on the bass, with ample texturing; projects a sizeable, believable soundstage out of the “box”.
– Bass not as deep as some comparable two-way bookshelves – quite deep cabinet and rear-ported design needs space behind to breathe; they sound best on a good pair of solid stands, not on a shelf.
Sound: 8/10
Value: 9/10

MY last review was of the Cyrus ONE Cast streaming amplifier, and as luck would have it, the distributor also supplied the matching bookshelf speakers, the ONE Linear. The name comes from an explicit design goal to give these speakers as “linear” a response as they could, which is a challenging task for any speaker, let alone one which is priced modestly.

Taking the speakers out of the box was an easy task, not least aided by the fact that the speakers are wrapped in a synthetic cloth bag which have drawstring handles, so lifting them out of the foam protection is a doddle. In the box, too, are a thin manual, stick-on rubber feet, if required and also two lengths of multi-core speaker cable, three metres long each.

The speakers themselves are handsome in their glossy piano black finish, if a bit nondescript. Note that the port is in the rear and the depth of the enclosures themselves preclude up-against-the-wall placement and indeed, from my testing, this is the case. You will likely need to prise out the blanking plugs in the binding posts, and I used my own banana plugs on the supplied speaker cable.

I perched the speakers on 24-inch metal stands with a pair of ISOAcoustics ISO8rs underneath as the interface to the stands. Thus mounted, I had them placed about three metres apart, toed-in a little to a listening position about 3.5m from the speaker line to the listening position.

In terms of amplification, I tested the speakers principally with their matching amplifier, the Cyrus ONE Cast, but also with a Naim Uniti Atom as streaming amps which might be likely partners for speakers such as these.

I warmed up the speakers for about one day with streaming music through the ONE Cast before serious listening. I note the highlights below, but in truth, I did a lot of listening over a period of two weeks with many genres of music.

LISTENING
With the Cyrus ONE Cast
I used a variety of sources to test the speakers, kicking off with vinyl playback with the Denon DP80 performing source duties with an Audio Technica 540ML MM cartridge.

Out of the box, the speakers seemed a little tight, but after a day of playing, there was already a greater sense of ease. Analogue playback was delightful, the speakers aspiring and for the most part achieving their goal of being “linear”. Specifically, they have a superbly even-handed response, with a nicely cohesive sound from top to bottom. No part of the audio spectrum seems overly emphasised, with good insight into the music at all points.

In particular, Herbie Hancock’s Maiden Voyage (Analogue Productions 45 rpm reissue) showed the basic capabilities of the speakers – a good sense of timing, with an open midrange which highlights Hancock’s piano tone and good cymbal textures from Tony Williams’ backing drums. Bass depth was good for bookshelves of this size, though bass heads will need to look elsewhere if that is a priority.

Switching to digital sources, the speakers did not miss a beat – first off with Miles Davis’ Kind of Blue (24/192 FLAC from HDtracks). Imaging from left to centre to right was solid, with the instruments placed well with good solidity of Davis’ horn and Paul Chambers bass in the centre. Rhythmic pacing was solid, though there are more agile speakers out there. The timbre of the muted horn was also rendered well, never falling into sibilance whilst maintaining a clarity and brightness of tone.

Then to test depth and imaging, I switched to Camille Thurman’s Inside the Moment, one of Chesky Records’ Binaural+ recordings (24/96 FLAC from HDtracks). The width of the stage was astounding with the ONE Cast – the combination of both painted a superbly large canvas, with good “dimensionality” which belies the bookshelf design. If there is a nit to pick, the depth of the stage isn’t quite as deep as it could be. But overall, the swing of the music and the unforced nature of the sound was enjoyable.

On to orchestral music, and my reference point is always Herbert Von Karajan’s 1963 Beethoven Symphonies on Deutsche Grammophon (Tidal MQA FLAC stream). Again, the wide soundstage was evident, with a good sense of scale. The orchestra was painted across this stage well, and it was easy to identify the sections of the orchestra. Depth again could have been a little deeper, but it was more than adequate. More importantly, the orchestral timbres of the massed strings, woodwinds and brass were realistically rendered. Timing and the ebb and flow between sections was smooth, too, without any undue emphasis.

To round out the auditioning, some rock and pop was required – first up was Peter Gabriel’s So (24/44.1 FLAC download) – this recording has been remastered by Gabriel himself, which improves considerably over the slightly glassy and brittle original CD pressing (and even the original UK press vinyl suffers from this somewhat). The speakers took up the challenge well, presenting the polyrhythms and multitrack production in a very enjoyable fashion. Gabriel’s duet with Kate Bush was particularly emotive on Don’t Give Up. But on Sledgehammer, I could have done with a bit more solidity in the bass though vocal projection was good, if not outstanding.

With the Naim Uniti Atom
It should come as no surprise that the ONE Linears are well matched with the ONE Cast amplifier – as they were designed with each in mind. But pairing these speakers with my resident Naim Uniti Atom was also a delight. The speakers are transparent enough to show the broad differences between the amplifiers.

The Uniti Atom’s class AB amplification stages have a distinctly different character than the Class D stages of the ONE Cast, and the ONE Linears are transparent enough to show you these differences. The Atom comes across as a little more energetic, helping propel the Linears more in rhythm and pace and even seemingly a bit deeper in the bass. The Atom has that edge, but is not quite as “clear” across the midrange and the top end, though there is probably a tad more cohesion across the whole range.

Auditioning the same tracks as above drove home these differences, and the Naim proved a good match with the Linears as well, though in different ways. The increased pace and ability to time brought out the slightly bass-shy speakers

Comparison
vs KEF LS50
Although this isn’t a fair comparison in terms of cost, the KEF LS50 has been a reference point for many reviewers and I am intimately familiar with foibles of this superb set of bookshelves.

As it happens, the ONE Linears acquit themselves very well, providing quite a similar aural profile (not too surprising as both designs are aiming for a very even-handed “linear” response).

The LS50 is more precise, and offers more insight into the midrange, as well as sharper stereo imaging and depth and a slightly superior sense of pace and rhythm. But the One Linears have in their court a wider and more expansive soundstage if not quite as precise, slightly deeper bass and they are also easier to drive – the LS50 is notoriously fickle in its choice of amplification. The ONE Linears are also a tad “brighter lit” – which is not to say bright, but a little less dark than the LS50s.

THE LAST WORD
The ONE Linears are superb little speakers and for the price, it seems churlish to criticise them.

If they are in your budget, and you have the depth and space to site them in your room away from walls (and certainly not on an actual bookshelf), I would definitely put this on your auditioning list.