The continuing sound and tale of Ruark 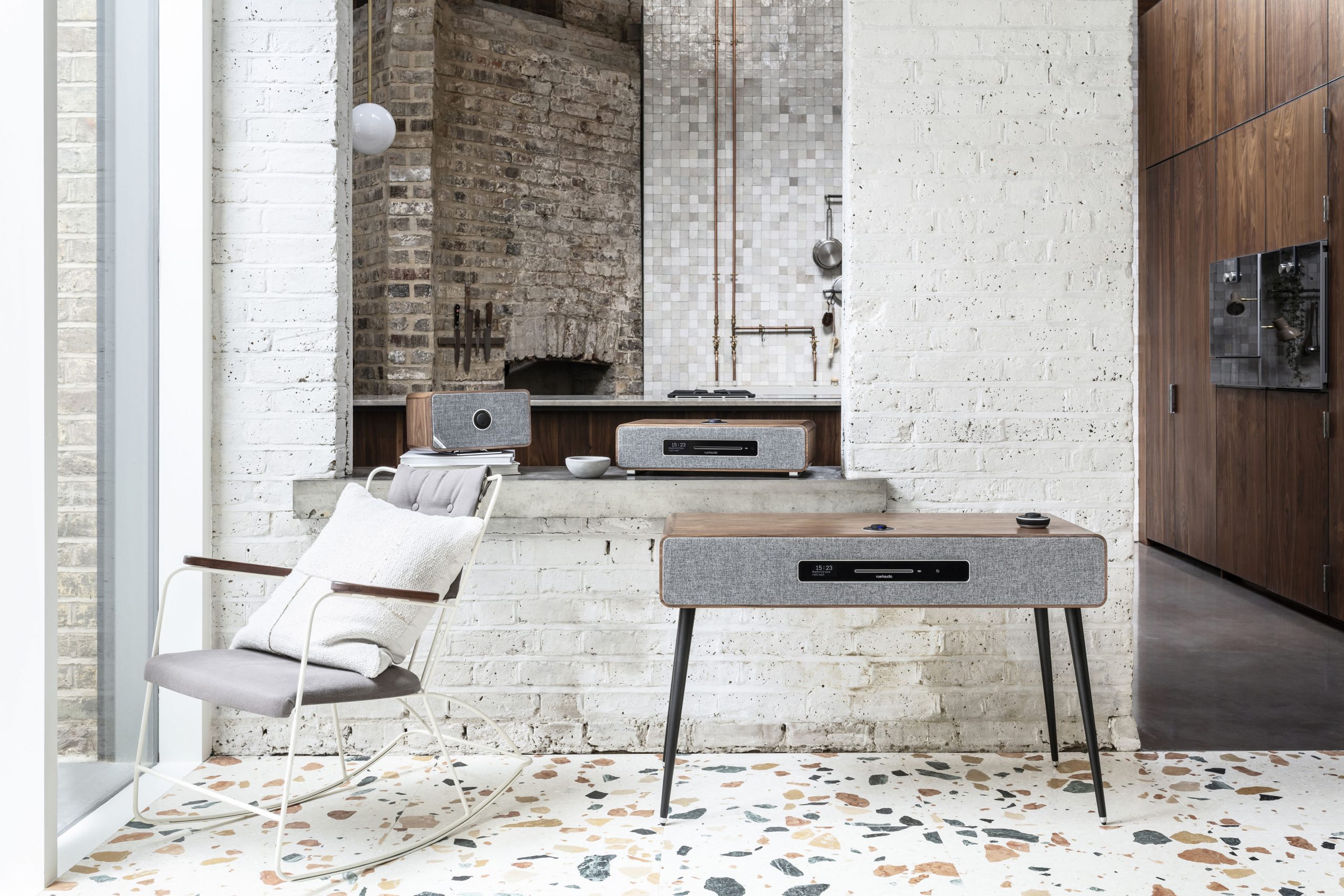 RUARK Acoustics was founded in 1985 by Brian O’Rourke and his son Alan, with the aim of designing and manufacturing quality hi-fi loudspeakers for the British market. In the two decades that followed, the company went beyond that, turning out some legendary loudspeakers and extending its reach to the Far-east.

Starting out with the Sabre and Broadsword in 1986, Ruark delivered a number of well-acclaimed loudspeakers like the Accolade, Talisman, Crusader and Equinox, capping the 20th century with the flagship Excalibur that cost £8,000 per pair.

The new millennium, however, saw a sea change in the audio industry – trends and demands were shifting, and the market for hi-fi separates seemed to be shrinking.

Meanwhile, the O’Rourke the elder had retired in 2000, and passed away two years later. Alan and his brother-in-law Neil Adams were in charge of the company, and open to new directions.

In the early 2000s, DAB radio was the growing trend in the UK, and the Ruark bosses realised that the company’s survival, growth and relevance hinged on their ability to adapt. Ruark Acoustics created a parallel line called Vita Audio, which later morphed into Ruark Audio. Vita focused on the lifestyle market.

Vita’s R1, in 2006, was Ruark’s first tabletop radio, and praised as the “Aston Martin of DAB radios”. The R2 and R4 followed, along with updated versions in the years that followed, most of the products being favourably received by both the press and consumers.

The Vita brand continued to be used until 2012, when Ruark had left the hi-fi loudspeaker business well behind… and Ruark Audio was born. The award-winning MR1 active Bluetooth speaker followed, then the R7 music centre, redefining, as Ruark touted, the radiogram. The company has been pretty busy since then, its latest product being the popular R5 high-fidelity music system that’s a wireless streamer and CD player in one box. Importantly, Ruark is still family-owned.

We interviewed Alan O’Rourke about the company’s history, direction and plans.

Q. What prompted the change in direction for the company 16 years ago? Did this necessitate any shift in the company’s fundamental design philosophy?

At the turn of the century, the focus seemed to be on vision rather than audio and the “must-have” products were flat panel TVs, which then were expensive, so this meant that money left for audio was limited. At this time, we were still doing quite well with our premium speaker range but could see that the market was changing, so we knew that we needed to adapt and change to survive.

I’d always been a keen radio listener, and with the BBC (British Broadcasting Corporation) starting to heavily promote their new digital radio services, I thought it would a good idea to develop a radio to take advantage of this. In my research, I discovered that the design and sound quality of most radios available at the time was very poor, so in 2004, we started work on developing a high-fidelity radio, based on the knowledge we gained from our many years in designing loudspeakers.

Of course, our new products now incorporate electronics for playback and amplification, but in many ways they are still speaker systems and although more compact, each one is designed for best sound quality using the same parameters and techniques we used for our speakers. The Telegraph, a famous British newspaper, said of our R1 – “it’s the Aston Martin of radios”! This statement delighted us as it concisely describes our aim with audio products we design and produce today.

Q. Where are there current products conceived, designed and manufactured?

All of our original high-fidelity loudspeakers were designed and manufactured in the UK, but another reason for our change of direction was that one by one, our cabinet makers closed down and in the end, we had no other choice than to look abroad for our supplies.

Today, all our products are designed and developed in the UK, but we work closely with a highly regarded Taiwanese OEM company who have their own factories and management in China. We also have our own team based there to keep an eye on production and QC.

As a person who believes passionately in local manufacturing, it breaks my heart that we can’t currently produce our products in the UK, but likewise, the “can-do” attitude that comes from our factory in China allows us to try new design ideas and at the end of the day, it allows us to produce premium products at more affordable prices.

Q. From the current line, which product has elicited the most enthusiastic response from the market?

I think that our R5 has drawn the most enthusiasm from customers and critics since we launched it last year, and I think the reason for this is that it offers virtually all the features of our flagship R7 model in a system that is powerful in sound, yet will easily fit into most people’s homes.

Q. There is a plethora of lifestyle and wireless music systems in the market now – how do you see Ruark standing out from this crowd?

From customer feedback and product registrations, we can see that customers often start by buying one of our products and then many go on to buy others, so eventually they may have our products in every key room in their home. I think that our aesthetic design is one of the first things that draws customers to our products. With their blend of quality materials, they make a statement without standing out, but once switched on and heard, people tell us all the time how much they love the sound and often that they’ve never heard their music sound so good.

Lastly, all our systems feature an intuitive on-board control system and apart from two models, also high contrast displays, so customers can quickly see information such as time and track data. With so many featureless Smart Speakers on the market, we think that our systems combine an element of classic design which customers feel comfortable with along with modern technologies and that’s why interest in our brand is growing.

Q. Which are your key markets these days, and what drives your design concepts for these markets?

From launching Ruark Audio, our plan was to build a strong UK market, before starting to export. Compared to speakers, the products we produce today are much more complex so firstly we wanted to ensure that our products were reliable and bug-free. Secondly, we wanted to use the UK as an example to our export customers to show how products should be marketed and sold. For instance, in the UK, we only sell our products through quality hi-fi stores and design and department stores such as The Conran Shop, Selfridges and Harrods.

Other than the UK, we now sell our products in many countries across Europe, Australasia, and the Far East. In particular, our business in South Korea and Japan is growing strongly, but in America, despite strong consumer interest, we have not even started yet, as we know that this could be a huge market for us and we want to be in a position to handle this market properly.

Q. Your products have longer lifespans than many other brands – how do you keep things fresh for a market where trends keep shifting?

Our whole product philosophy is built around evolution rather than revolution. Typically, each of our products has a lifespan of around five years before a new model is introduced and with our evolutionary ethos, a visible link can be seen between the old and new model.

In our opinion, good clean and uncluttered design is also key to making products that last. We also spend much time considering the technology we use inside. For instance, voice control is a technology we are yet to embrace as we feel that it will possibly evolve substantially over the coming years and we don’t want our products to become out-dated by technology. Therefore, all our products have both analogue and digital inputs included so devices from the likes of Google can be easily connected and used.

The last passive speakers we made was the Crusader Mk3 which we introduced in 2005. These were a compact three-way system and for the first time, we used a ribbon tweeter which sounded fantastic. We carried on making our speakers until the introduction of our R4 all-in-one music system in 2008. By then, interest in our music systems was growing so strongly that we decided to cease production of our loudspeakers to concentrate fully on the Ruark Audio side of our business.

I’m a strong believer that design and desires are cyclical. The resurgence of turntables and vinyl records is an example of this, and whereas now many consumers like the appeal and convenience of one-box systems, I think that perhaps it won’t be that long before music lovers start to want systems again with separate speakers. We already have a concept design for such a system, which we envisage we will launch in a few years, so watch this space.

Q. How much of an impact has the Covid-19 pandemic had on your business? How do you see it affecting people’s decision to purchase a music system?

When Covid-19 first struck, we really didn’t know what to expect! For the first couple of weeks, our customers in the UK and Europe cancelled their orders because all shops had been instructed to close, but after this we soon found that our customers were again reinstating their orders and in many cases, wanting more. Basically, most retailers who had invested in building a good on-line website have done very well over the past few months, but I fear that traditional shops and shopping centres who were already struggling before Covid-19 may never recover, so the retail landscape is likely to look very different over the next few years.

Regarding ourselves, as I said, the past few months have been far better than we expected and it now looks as though we are on course for a record year, but the issue we now face is component supply! Lockdown meant that the world’s factories stopped working and this is now causing issues for manufacturers everywhere.

Whatsoever, what we have seen these past few months is that during lockdown, many people have again been turning to music. Perhaps this is to escape this uncertain world that we now seem to be living in, but as we’ve always known, music is good for your mind and soul, so hopefully this is a trend that will long continue.

I would like to think that in ethos, we will still be the same, but just bigger and better known. Also, I think that being family owned and privately run is important to us as it gives us freedom to choose where we want to go and what we want to do.