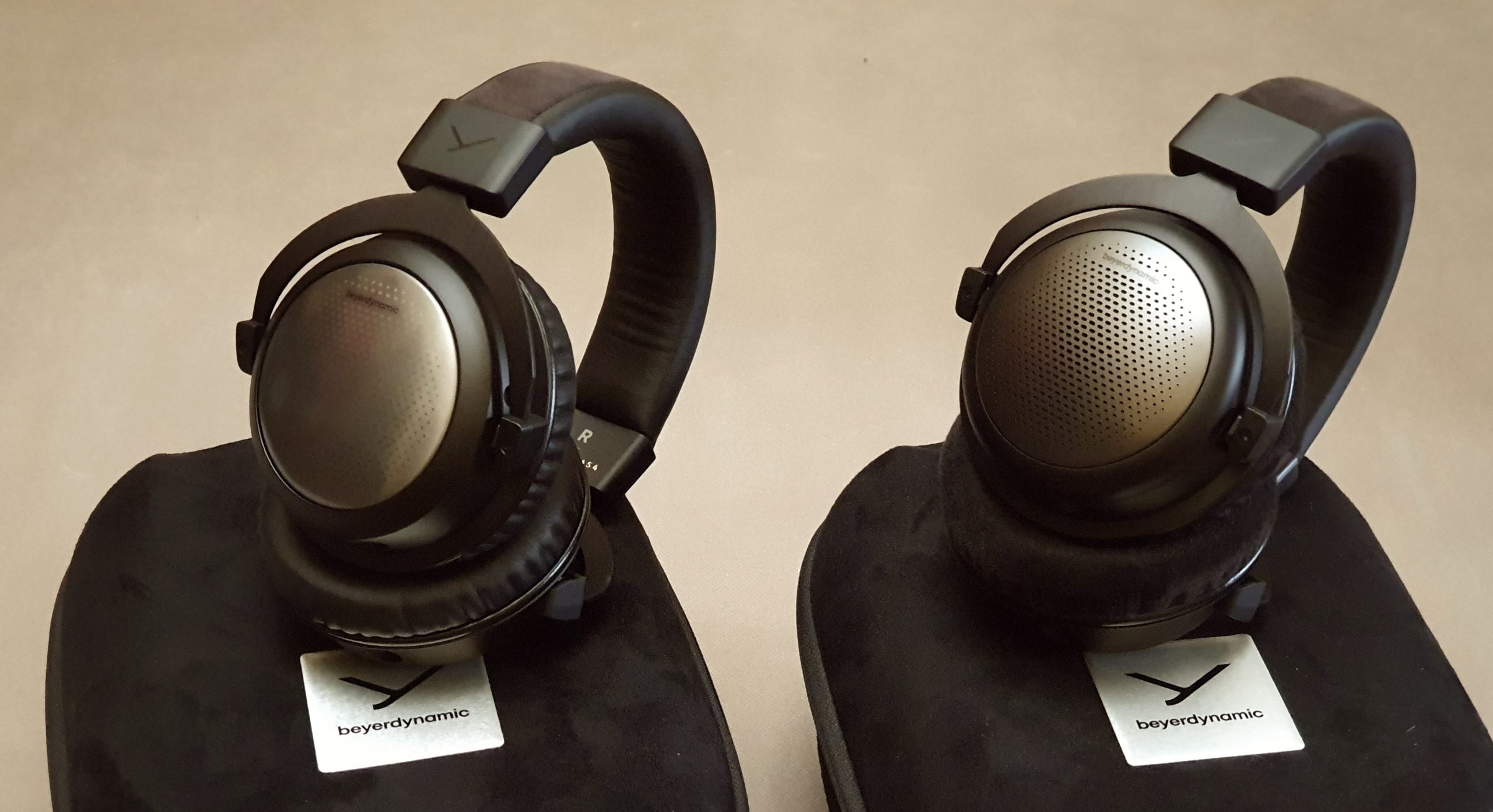 + T1 is easy to listen to, with ample bass, open midrange and plenty of detail, but never etched or abrasive; very even handed across the mids and highs; good sense of air and dimensionality in its projected headspace; comfortable velour ear pads and lovely finish on the metal and plastic components; T5 has a more dynamic sound, with a more driving character than the T1, but very similar sound signature… also good levels of detail, space and air, though not as good as the open back T1; both are very non fatiguing, the T1 especially so; both have lovely premium builds with high quality materials; lovely storage cases, though rather large, and lovely woven cables with nice connectors come as standard; revised 3rd Gen design has lower impedance and hence an easier drive for modern devices.
– Although they can be driven by modest outputs from iPads and USB-C dongles that come bundled with phones, they really require high-end partnering headphone amps to truly shine; T1 can come across as a bit too laid back, with a lack of excitement with higher energy music; T5 is more energetic than the T1, but still more reserved than other over-ear headphones such as the Grado GH-1.
T1
Sound: 8.5/10
Value: 7/10
T5
Sound: 8.5/10
Value: 7/10

ALTHOUGH Beyerdynamic is a venerable name in the transducer business, with an impressive heritage in microphones and headphones which stretches back decades, I must admit I have not dabbled much with its products. I have previously only briefly auditioned the DT990Pro and did not find it to my liking. One of the reasons was the very high impedance design (250 Ohm), which did not suit mobile devices, and required fairly specialised headphone amplification to shine.

The third generation of the already well-established (and well-regarded) T1 and T5 designs feature much lower impedances (32 Ohm vs 600 Ohm) which make it much more easy to drive from modern devices such as smartphones and tablets or their accessory dongles.

Both headphones have very similar looking designs, though there are notable differences, reflecting the fact that the T1 is an open-back design whilst the T5 is a closed-back design, though both are over ear. Both feature a very premium build using high quality materials as befit the asking price.

The T1 features very comfortable velour ear pads, with a comfortable headband and a moderate clamping force, making for comfortable long listening sessions, even in our humid tropical climate. It comes with a high quality high purity copper three-metre cable (removable with 3.5mm jacks for both drivers), sheathed in a woven fabric covering and terminated with a 3.5mm TRS mini jack, with a threaded connector and a matching threaded quarter-inch headphone adaptor.

The hard case is a large affair, also trimmed in velour. The headphones do not fold flat. It’s clear that this model is intended for home use, with the long cable and threaded adaptor. The ear cups themselves are of a decent diameter and should accommodate most ears easily. The open grille design on the backs of the ear cups are also very smart and look up to date with a graphic pattern to the holes in a grey metal finish.

The T5 looks very similar to the T1, a similar pattern etched on the metal surface making for a similar appearance in design to the T1… but there are no holes, being a closed back design. Also of note: the ear pads are different, trimmed with soft Alcantara leather instead of velour. Also different was the supplied cable – a shorter 1.4m cable, with a non-threaded 3.5mm TRS mini-jack termination. Clearly, this model is intended to be used in some mobile situations, having a shorter cable focusing on a 3.5mm connector. It does come with a non-threaded 3.5mm to quarter-inch TRS jack adaptor as well, and the same large luxury hard case. The T5 also does not fold flat.

TESTING
I tested both with a variety of headphone sources:

Principal testing was with 2 and 3 above – they were clearly the best ways I had to drive these headphones. The advantage of those, too, were the ability to plug in both the T5 and T1 to A/B test both, as well as against my reference headphones, namely the Grado GH-1s and Focal Elexs.

LISTENING
For headfi, my first port(s) of call are the superbly recorded Chesky Records Binaural+ recordings which I have purchased from HDtracks. These minimalist recordings sound superb on speaker systems, but really take on another (literal) dimension when played through headphones and IEMs. The binaural set up has the ability to capture an immersive sound – with height, depth cues, as well as the curious ability to project sound from ‘behind’ the listener.

Macy Gray’s Stripped (24/96 FLAC from HDtracks) showed the ability of both the T1 and T5 to retrieve these cues and make Ms Gray’s voice a palpable presence in the sound field, bracketed by her accompanists, with admirable air. The T1 rendered a larger soundfield, though the T5 was not poor in this regard. The T5 showed a greater sense of energy and rhythm, though this difference isn’t night and day.

Moving on to my retinue of regular test tracks – orchestral music in the form of my latest favourite recordings of John Williams conducting the Vienna Philharmonic (John Williams in Vienna, Deutsche Grammophon) playing his most famous film themes, accompanied by the incomparable Anne-Sophie Mutter on violin. I streamed this from Tidal on MQA and the modern live orchestral recording was rendered with suitable realism, with good scale and dimensionality across the orchestral spread. There was also good depth to the stage, and the soloist was placed well in this spread – a testament to the system being able to resolve positional cues.

After these expansive orchestral selections, I segued to some downbeat lounge electronica, starting with Zero7’s sophomore album, When It Falls (16/44.1 CD rIP to Apple Lossless). The intricately synthesised textures and beats were all present and correct, but on the T1, there was a slight lack of drive and energy which I felt was always present even in the slow tracks. Vocals were projected well in the mix, with the layering of instruments apparent. The T5 turned in a more exciting rendition of this album, especially on the second track, Home, with Tina Dico’s vocals projected with more force.

Testing next with a DSD rip of Dire Straits’ Brothers in Arms (SACD Single DSD Rip) showed how both Beyerdynamics are very listenable headphones. On the Focal Elex, this album comes across as a bit harsh and forward – no doubt a legacy of its mid-80s early digital mastering. On the T1 especially, the entire album was very easy to listen to, without missing any detail, but presented in a very palatable way. The solid bass foundations made for a good structure upon which Mark Knopfler’s guitar work shines.

I rounded off the formal listening with a recently released live recording of Suzanne Vega, entitled An Evening of New York Songs and Stories (Tidal HiFi FLAC stream) – both Beyerdynamics captured the immediacy and intimate nature of the recording at Cafe Carlyle, with her vocal inflections and sparse accompaniment. On Luka, the second track, one can almost imagine that you are in the venue itself.

Listening on the LG V50 was adequate, though there was always the sense that there wasn’t quite enough reserve in the output to really make the T1 or T5 shine – detail and refinement was there, but not quite enough punch, especially on more energetic tracks such as St Germain’s Deep In It on Boulevard (Tidal HiFi Stream).

Testing with the Apple USB-C 3.5mm mini jack dongle was a bit of a surprise – the modest DAC turned in a decent result. Though there was a obvious lack of drive and control that both the T1 and T5 require, the sound was always listenable, with decent amounts of detail and a respectable soundstage albeit writ in a smaller scale. However, it is safe to say that premium partnering electronics are essential to get the best from both the T1 and T5.

Vs Focal Elex
The Focal Elex headphones project a lot more energy and drive right off the bat, and although there are similar amounts of detail and resolution, they can be fatiguing with certain recordings. Both the T1 and T5 have a far more reserved presentation and consequently make all recordings much easier to listen to, without sacrificing detail.

Vs Grado GH-1
Again, the Grados always prove to be an outlier in the world of headphones, with a presentation and voicing which always strikes a different path. The Beyerdynamics are far more even-handed and do not unduly emphasise any part of the aural spectrum, whilst the Grados definitely have a love for the mids and highs, which highlights ambient cues especially in live recordings. I love the Grado signature sound, but have to admit that the Beyerdynamics will likely be more universal in their appeal.

THE LAST WORD
Beyerdynamic has updated the T1 and T5 to keep up with the times, but have successfully done so without throwing the proverbial baby out with the bath water. Both headphones exhibit all the key characteristics of a premium pair of headphones, with a great comfort and listenability to boot. The presentation of both is easy to appreciate and represents a significant step up from more commercially oriented headphones in the US$500 and below category.

However, even with their more friendly 32-ohm impedance ratings, both demand the very best partnering electronics to really show what they are made of – matching them with headphone amps possessing good “drive” would be crucial to counter the slightly laid back nature of the T1 especially.

If you are listening at home alone in quiet circumstances, the T1 would be the obvious choice. But if you do need to listen with some sound isolation and in a more portable way, the T5 is a better bet, with a little more punch and drive as a side benefit.

As with all things headfi, audition with your partnering electronics carefully before purchasing – recommended!