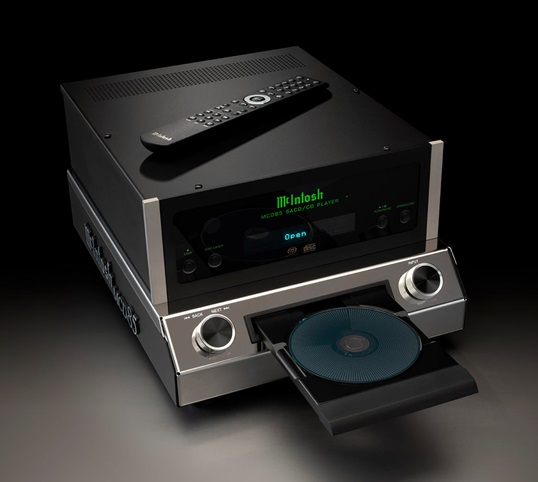 THE SACD format is far from gone, and McIntosh Labs is now housing it in a form to match the company’s latest line of retro-themed products. The new MCD85 SACD/CD player follows in the style of McIntosh’s more recent amplifier offerings.

“With the great success of our similarly retro-styled MC275 and MC1502 vacuum tube amplifiers, MA252 and MA352 integrated amplifiers, and the warm reception of the recently introduced MC830 solid state amplifier and C8 vacuum tube preamplifier that also have retro touches, it’s clear that many people want their home stereo system not to blend in, but instead to be distinctive looking. To be put on display. To be a conversation starter. To make the statement… The MCD85 does all that. And more,” the McIntosh press release informs us.

The highlights of the MCD85 are:

“The MCD85 can play store-bought SACDs and CDs as well as music from homemade CD or DVD data discs. Numerous file formats can be played from these discs including AAC, AIFF, ALAC, DSD (up to DSD128), FLAC, MP3, WAV, and WMA.

“The USB Audio input supports up to DSD256 and DXD 384kHz, and can be used to stream digital music from a computer or other digital storage device.

“There are also two coaxial and two optical digital inputs that support PCM signals up to 192kHz,” the company adds.

The MCD85 can be hooked up via its balanced and unbalanced fixed analogue stereo outputs. The narrower width and balanced outputs allow it to be sited conveniently for easy disc loading and far from the rest of the system without suffering signal loss. Sadly for some, though, there’s no output for headphones.

The MCD85 is shipping next week in the USA and Canada, and to global markets very soon… expect a retail price of US$4,500.