The pain in the pleasure… restoring a vintage turntable 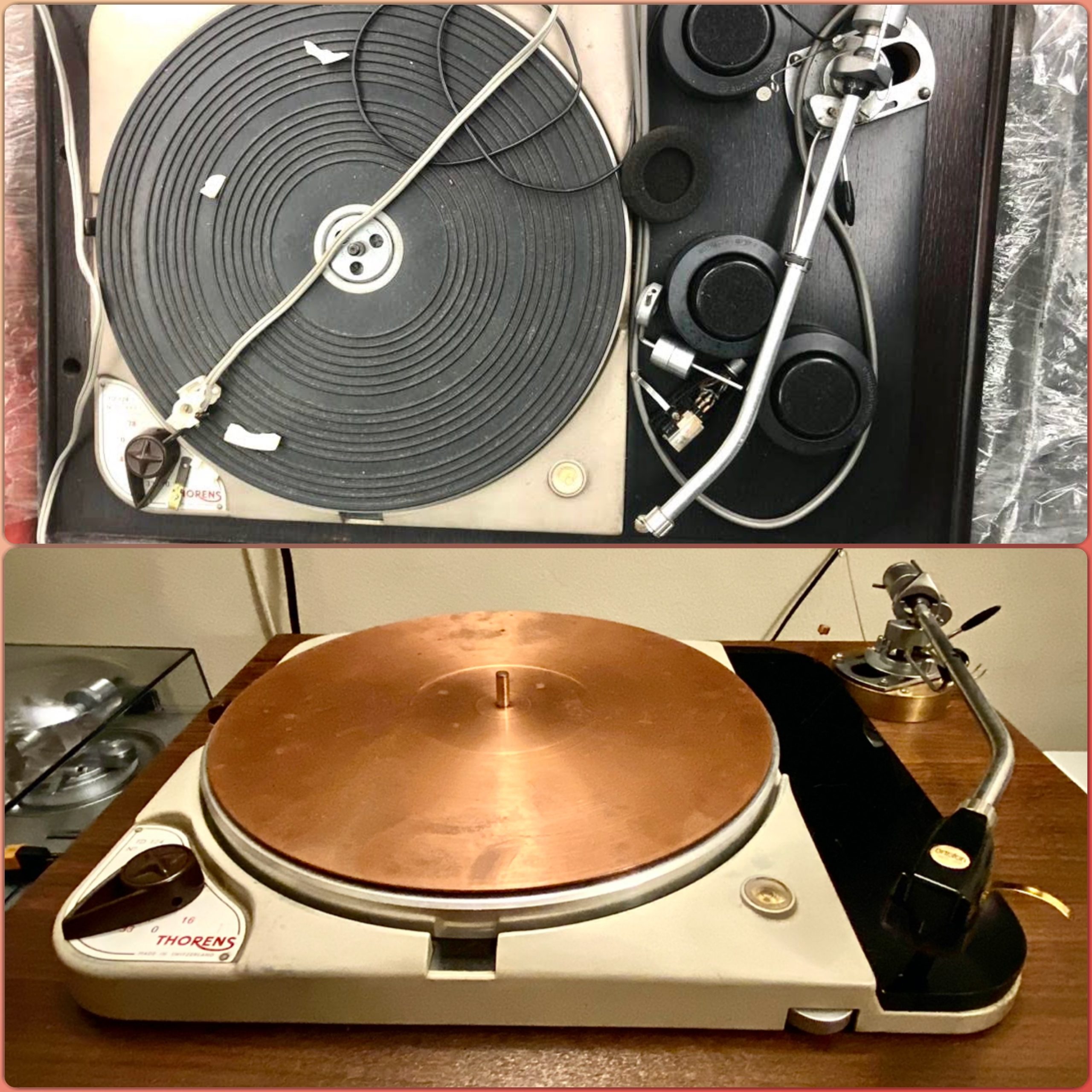 My previous article was largely about the pleasures of vintage turntable ownership as I am enthralled by their sound. Now, it’s time for the truth to be told about the arduous behind-the-scenes tasks for those of you wanting to take this rewarding journey.

If you chance upon a vintage idler turntable, there can only be two options should you want to embark on the restoration journey. It’s between doing it yourself if you are mechanically inclined, and having it professionally restored… the latter can really burn a hole in your pocket.

As for me, being a bean counter, there was no way I could have done the job myself when that Thorens TD-124 MkI mounted with an SME 3012 tonearm landed on my doorstep in a sorry state, back in November 2018. Profanities ran around in my mind when I realised that my restoration dream could be dead in the water as the expert Thorens restorers were in Britain or elsewhere in Europe… so I had to find local talent. It was between persevering with the journey or handing the “joy” to someone else to pursue.

Being in the reviewers’ circle helped as fellow reviewer Lim Juan dropped by almost immediately after the news broke and his remark was “ai-yai-yai-yai-yai” when he laid eyes on it.

“You have a real gem here but nothing works. BS Lee will solve it for you as he did for me and (fellow reviewer) MK Chong.” Now sadly departed, Lee was one of the prime vintage turntable experts and restorers in Malaysia. When I told him about the Thorens back then, he arrived shortly after to pick up the turntable for restoration. He was given carte blanche mandate to bring it back to life. Brilliant, I thought, I was going to have a fully functional turntable by the following week. That was, of course, wishful thinking, on hindsight.

I had the good fortune to document the restoration process together with Lee. Methodically planning a restoration is of paramount importance so that you leave no stone unturned. After completing the primary assessment, the turntable was partially stripped down for an initial cleaning before work began. The plan was to first address the mechanical gremlins before moving on to the motor and tonearm. As for the plinth, we were looking to purchase it from a specialist in Moldova.

The Thorens and SME 3012 tonearm dated back to 1962 – I had the tonearm serial number confirmed by SME Engineering that made it 56 years of age back in 2018. I wasn’t certain how long the Thorens had been left in such a state, but the idler slider pulley was jammed by the gummed lubricant. Not even the strongest amongst us could turn it.

After dissembling the entire turntable and having put all the components through a thorough degreasing and cleaning, all the mechanical parts were subsequently lubricated and reassembled. It was now mechanically sound and secure with the usual clunky sound switching back and forth. I wouldn’t have been able to figure this out nor would I had been able put the puzzle back together again.

The turntable bearing was stripped for inspection and it was in really bad shape. The thrust bearing plate assembly needed to be replaced along with the ball bearing. A new bronze bearing end-cap thrust plate assembly was ordered, with the mushroom grommets, silicon discs and drive belt, from Audiosilente. The initial intent was to reuse only the original bearing barrel.

Next, the motor. It didn’t spin, despite current flowing through it. I jumped onto eBay to look for a motor but Lee said, “Amateur! Let’s rebuild it together,” The motor was fully dismantled into components, which were cleaned and the rotor subsequently re-lubricated. The sintered bronze bearing impregnated with spindle oil was overhauled and lubricated with new spindle oil. The motor was now as smooth as silk – it should last another lifetime after this. More money saved for the cartridge.

With the motor job completed, the last bit to do was to ensure that the belt alignment was correct. I was told to order the correct belt if I wanted to achieve the actual revolution speeds as both the 50Hz and 60Hz belts were different. I wouldn’t have known that!

With the turntable’s mechanical bits sorted out, we moved on to the tonearm months later after Lee gathered sufficient strength to proceed as he already wasn’t keeping too well at the time.

Disassembling the tonearm was a nightmare. The arm wand was sagging and had a grinding column bearing. To pour salt to it, the anti-skating pole was bent, amongst other issues. A lot of work and parts were required – rubber washers, elastic coupling, column bearings and a few other serviceable parts. The shocker was the degradation of the original tin-coated copper internal tonearm wiring; Lee replaced it with Litz wires.

The bearing preloading was re-calibrated after the rebuilt as it would affect the horizontal lateral movement across the record which in turn would affect the tonearm tracking. I couldn’t recognise the tonearm once Lee completed the job… this was one of his greatest work ever.

I sincerely would like to thank him for completing my tonearm restoration as he put his best into his final masterpiece, supported by sheer determination and passion to complete the mechanical restoration for me. Lee succumbed to his illness not long after this. May god bless his soul.

With Lee departed, I was left with a mechanically perfect turntable and tonearm in hand, only the turntable bearing, plinth and the final fit were left to do. I found a resident idler turntable expert, Captain Sien of SPH PH fame on Facebook, to take on the remaining journey which I will share in another article.

So, for those of you who are thinking of buying a vintage turntable, it’s not entirely plug-and-play as you will never know what you are landed with. It helps if you have the mechanical inclination to make things right but should you lack the required skillset, you would need to have the budget and perseverance for a local expert to see it through to perfection.

I assure you that once it’s perfected, the joy derived from these vintage classics is immeasurable. Despite the clinical flaws that you may come across, their musicality will drown out any perceivable shortcomings. And believe you me, this adventure is only for the brave at heart.