Moonriver Audio Model 404 amp — not in the modern mould 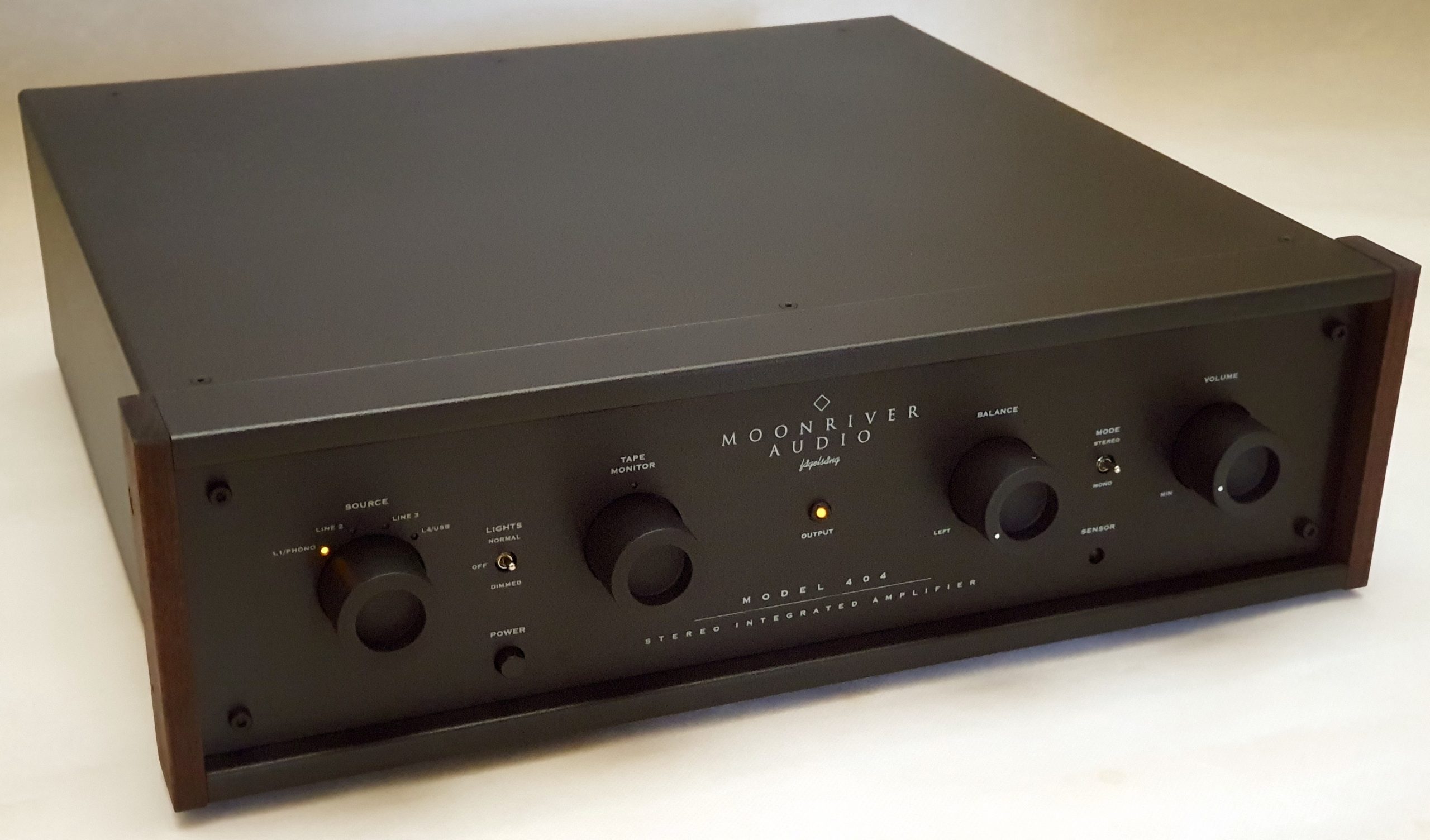 – Performance can be matched or bettered in some aspects by some cheaper separates, may be other choices at this price point; can run out of power and control with more demanding loads; no XLR inputs or outputs; no headphone output.
Sound: 8/10
Value: 7/10
A guide to the ratings

MOONRIVER Audio is a relatively new entrant to the hi-fi scene, hailing from Sweden, the land of meatballs, Ikea and Volvo. Moonriver’s Swedish motto, “Fågelsång” (meaning Birdsong) and philosophy reflects the company’s Swedish flair. Indeed, the Scandinavian influence can be seen in the physical design of the Model 404 which embodies restraint and elegance, with more than a hint of a 1970s vibe. The amp is hefty in build, though I would not say over-built, and the dark wood surround and symmetrically-spaced knobs make for a handsome unit.

In terms of the unit’s features, there is also a similar ethos, with careful consideration of functionality. The amp sports four analogue inputs, one of which can be a phono input if a phono board is specified, with a grounding post. The phono board comes in MM (40dB gain), and a costlier option of a MM/MC version adds another 20dB gain.

There is also an option of a DAC board based on an AKM chipset, but given the uncertain supply of AKM’s DACs after the factory fire in late 2020, there is evidently a newly design DAC module underway. The DAC module has only an asynchronous USB-B input.

The Malaysia importer has set the base line with the MM board in the amp, as I tested it, at the base price of RM19,900. If you should require, the MM/MC boards and the DAC board are extra cost options. Testing was therefore via the line level single-ended inputs as well as the MM phono input. There are no balanced inputs on this amp. My review unit was the base model sporting 50W per channel output, and not the reference model which sports a slightly higher power output by dint of a beefier power supply.

The amp also curiously sports a set of tape in/out phono sockets for those who still have three-head cassette decks or have delved into reel-to-reel tape. You can also use this for DSP or EQ units to monitor before/after processing – a rare but useful addition. There are also two sets of preamp outputs which can be used for subwoofers and the like. There is no headphone output, but one of the preamp outputs can be purposed into a dedicated headphone amp to provide such functionality.

On the front panel, there are four knobs to select the source, turn on tape monitoring, balance and volume. There are also switches to dim the LEDs as well as a mono/stereo mode switch. The switching is done via relays which operate softly and the volume knob is a lovely motorised Blue Alps unit.

The design of the amp is unique in the choices which the designer and founder of Moonriver, George Polychronidis, has made – not least, a fully discrete input stage coupled with an integrated circuit power stage. The stated philosophy is that the line gain stage has more bearing on the sound quality than the power gain stages, where the Texas Instruments LM3886 shines. All of this is coupled with meticulously designed power supplies, and through hole componentry to make servicing easier in the case of any issues.

Set-up was very straight forward with good quality connectors at hand, so speaker cable was easily installed, as with an IEC mains socket and phono inputs. The unit is also furnished with a small IR remote with basic source switching and volume functionality (via the motorised ALPS unit) as well as the ability to mute or switch to tape monitoring.

On the advice of the editor of this site, the amp was left to burn in for an extended period of two-plus days with Internet radio before any serious listening.

LISTENING
The burn in period was definitely necessary as out of the box, a casual listen made for a tight-ish, non-flowing sound – nothing particularly wrong, just not very organic. After two days, this loosened considerably, with a much more flowing delivery of musical tempi, rhythms and textures.

With the Q Acoustics Concept 500s:
I started with listening to LPs with the SL1200 GAE/Ortofon 2M Black, which was a good match into the well designed MM input stage – this is not an afterthought.

Kicking off with 45rpm Impex reissues of Tsuyoshi Yamamoto’s Midnight Sugar and Misty (Three Blind Mice Records, TBM 23 and TBM 30 respectively), the Moonriver leapt out of the gate with the Q Acoustics floorstanders. Rhythms were on point and well regimented, with a great sense of flow and swing, essential to the underpinnings of ’70s Japanese Jazz, with bass lines and drums in sync with Yamamoto’s syncopated right-hand belting out his originals (Midnight Sugar) as well as his unique interpretations of jazz standards (Misty). I was reminded that I hadn’t listened to these for a while and it was telling that I was experiencing these sides in rapt attention once again.

Detail retrieval was good, though there are more revealing amps out there, you never feel there is a lack of detail. Moreover, there is a great sense of aural density – instruments have weight and volume, and tonal/timbral accuracy is good, especially with pianos. All of this is placed on a wide and deep soundstage, with believable space between instruments.

I proceeded to test this further with an Analogue Productions 45rpm reissue of Herbie Hancock’s Maiden Voyage (Blue Note ST-54195), and was not disappointed, with Freddie Hubbard’s horn harmonising with George Coleman’s sax, with Tony Williams’ delicate cymbal work as a backdrop. Dynamics were well portrayed, with the ebb and flow between the various players unforced and natural.

I then switched to digital sources, after ascertaining that the MM phono board was a more than a worthwhile addition. I used my Roon set-up to stream to the Mytek Brooklyn DAC+, which is a very revealing and neutral source, which is true to the digital file, be it PCM, DSD or MQA encoded PCM.

I ran through my set-up playlist of test tracks and the amp never put a foot wrong with any of my standard retinue. If I were to level some mild criticism, it would be that there is better refinement to be had from the likes of the Accuphase E380, or more muscularity from my resident Parasound A23 Power amp, or better pace, rhythm and timing from my Naim Uniti Atom. The Moonriver 404 certainly doesn’t lack any of these qualities, only that it cannot quite outperform all of them at the same time. But as a whole, the amp strikes a great balance between all of these aspects and injects an infectious energy and fun to the music, too.

Of note during listening – there is a very subtle warmth throughout its rendition of Charlie Haden and Antonio Forcione’s Heartplay (24/192 FLAC file from HDtracks), with good sense of the swinging tempi, and a nicely rendered soundstage with separation between the two instruments with “space” between them.

Also notable – the sense of space and timbral believability of John Lewis’ piano on Evolution (Tidal HiFi Stream) – the piano tone was lovely, with a clear bell-like quality from John Lewis’ playing style as if it might be a glockenspiel on the opening track Sweet Georgia Brown.

Finally, the way that the amp renders orchestral timbres in the seminal Living Stereo recording of Fritz Reiner conducting the Chicago Symphony Orchestra (SACD Rip Single DSD) is wholly believable and the sound stage well placed in front of the listener. The dynamics were also well portrayed – the power of the orchestra was on show, without any undue harshness.

With the KEF LS50:
If there was a chink in the armour for this amp, it was when faced with some of the tricky loads presented by the KEF LS50. This speaker can be very revealing, with a reference quality to it, but demands amplification which can control its drivers at its impedance lows. In this respect, the Moonriver turned in a good but not stellar performance – in tricky passages, the amp exhibited a slight tendency to muddle upper bass and the midrange. Nothing egregious, but a slight blot in its copybook.

But when presented with simpler acoustic music, or simpler produced music, the LS50s with the Moonriver 404 showed a lovely balance and solidity, which made the LS50s sound bigger than their smallish enclosures might suggest.

With the Falcon Acoustics LS3/5a:
Somehow, the aesthetics of the amp and these speakers match, even though both have only been manufactured in the past few years – their ’70s design inspirations seem to match well. There is also a startling good synergy in the way they make music, with the LS3/5as showing off their forte in the midrange, but also controlling the sometimes rather limited bass quality as well as opening up the treble registers. The overall effect was to really make the most of the LS3/5as strengths – the out-of-the-box effect and vocal projection, whilst ameliorating the worst aspects.

In fact, I would go so far to say that this is one of the best matches I have ever heard for the LS 3/5as in terms of amplification. This legendary mini-monitor can be very picky of its partnering electronics and I have had surprising hits and misses in my trials – some relatively inexpensive amps have delivered the goods whilst other expensive amps have not really made these speakers sing.

Of particular note was the hit by Yello titled The Race on the album, The Flag (Tidal HiFi Stream), a joy to behold through this combination. The electronic production was clear and uncluttered and the amazing stereo panning effects stretched from wall to wall, with clear rhythm and pace throughout.

One other notable feature: when listening to my old Lenco L78 with a Shure M44G (a modest but musical stereo MM cart), the mono switch was very useful on an old mono 1959 second pressing of Miles Davis’ Kind of Blue, allowing you to solidify the central image of the mono recording, as well a improve “depth” as well a reduce noise from a less and pristine mono record.

CONCLUSION
The Moonriver 404 certainly doesn’t fit the mould of a modern integrated amp – it makes some very different design choices, and on the whole, these choices make for a very enjoyable amp to listen to. However, at this price point, there are also a whole host of other talented integrated amplifiers with performance to match or surpass.

However, few would be able to match the Moonriver’s musicality and balance, the very hallmarks of Scandinavian design. Thus, I would recommend it for careful and extended auditioning in your system – for the asking price, you must be convinced of its considerable strengths with your source, your speakers and your choice of music. After all, to quote from the song which this brand is named for, “We’re after the same rainbow’s end.”