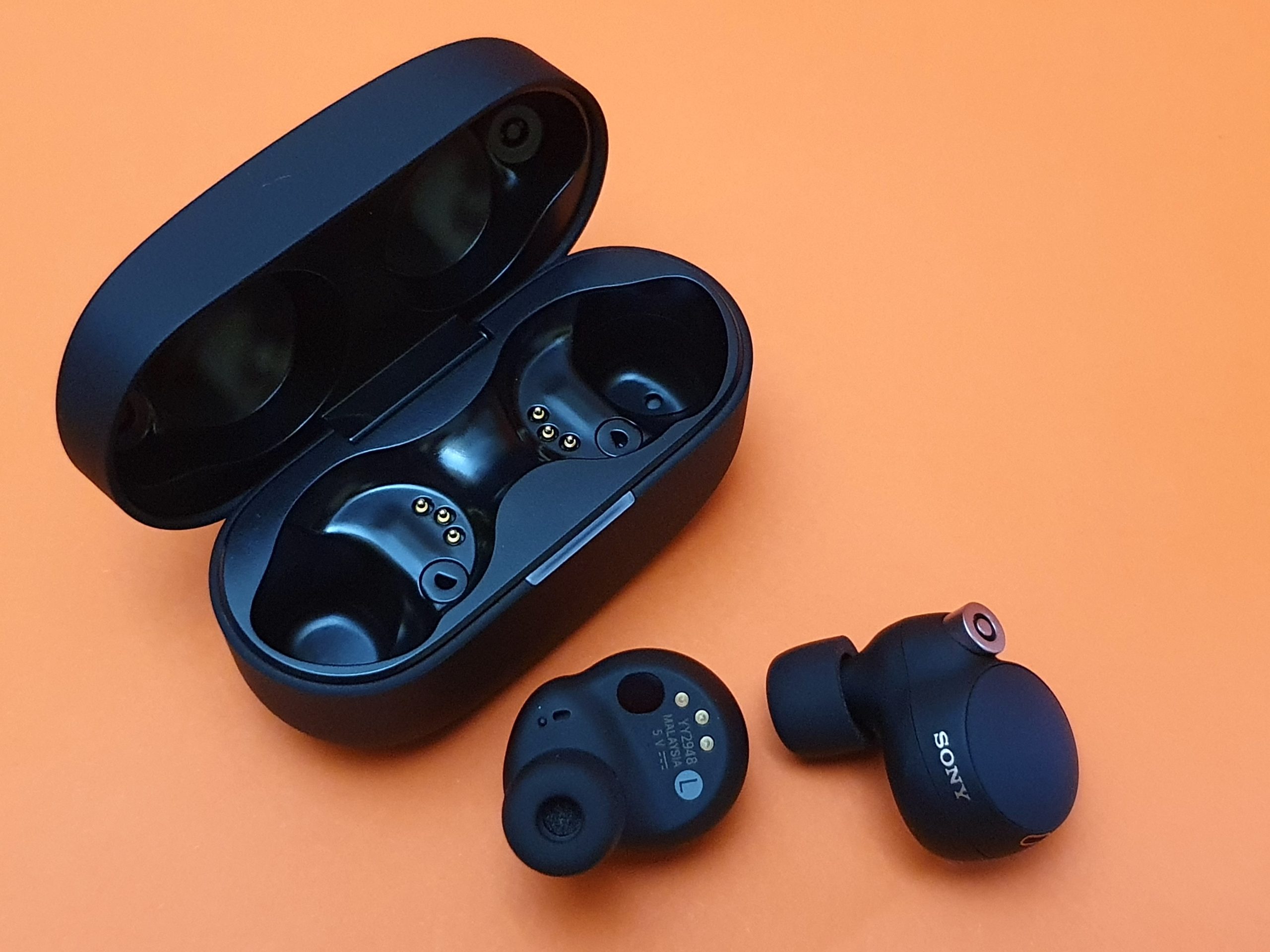 OVERLOOKING the awkward naming convention Sony has adopted for its flagship true wireless (TWS) earphones, the WF-1000XM series is probably the most recognisable alphanumeric string of characters to date. The newest model, the WF-1000XM4 – aptly named, being the fourth iteration – was released in June to a warm reception.

As usual, Sony took two years to come up with the successor for its previous generation TWS and throughout my lengthy testing period, I understood why. The XM4 also came in an environmentally-friendly retail case made of paper to reduce carbon footprint and needless non-biodegradable plastic consumption.

The packaging is simple but it sacrifices some legibility when it comes to the provided documentation. Thankfully, the quick-start guide was simple enough for my primate brain to understand and I got it to work almost immediately. The WF-1000XM4s also came with three ear-tips – small, medium, and large. The ear-tips are made of a composite foam material from the looks of it, but feel more fragile than the usual silicone ones – only time will tell.

Build quality is good, but feel plasticky. Instead of using a matte rubberised finish on the case or earpieces, Sony chose to texturise the plastic surface instead. This is a longer-lasting finish and the surface won’t get gummy after a few years, but the plastic does not feel as premium.

Charging comes in the form of a USB-C port on the carrying case, and the case charges the earphones. The USB cable supplied is very short so do check if you have any extra cables lying around. An LED indicator shows you the battery level. You can also check the precise battery percentage from your phone or computer.

We have written an in-depth piece on the technology and hardware behind the WF-1000XM4, so do check that out here.

The earphone shape has deviated from their second and third generations. They are now bulbous and rounded with the part sitting inside your ears much larger than before. The back plate surfaces are touch sensitive and you can assign different functions for different tap combinations.

Once paired, the earphones will play and pause automatically when you put them on or take them off. They could also work individually if you want to be more aware of your surroundings, and it’s also helpful for quick listening.

SETTING UP
Pairing the XM4 was simple. To further enhance the listening experience, Sony has also provided a companion app called Headphone and is available on both Android and iOS. The application provides an assortment of settings for you to tailor the XM4 to your liking.

Initial set-up might be overwhelming as the app has some prerequisites to be met before you can fully utilise all of its features. Sony’s 360 Reality Audio requires you to take photos of your ears during set-up for it to work. You can also test to determine your optimal earbud tips – I found the medium ones to be best for my ear canal shape.

The app also updates the earphones’ firmware, which took a few minutes for me and I had to keep the earphones out of their case for it to progress.

Some of the other functions on the app are the Ambient Sound Control, Speak-to-Chat, Equaliser, Bluetooth Connection Quality, and DSEE Extreme. If you want the earphones to choose which Ambient Sound Control mode it thinks is suitable for your environment, you could turn the Adaptive Sound Control on. Based on your location data, environmental sound, and your body positions/movements, the earphones will determine whether you need to hear outside noise or not.

There is no companion app for Windows and Mac as far as I am concerned so any settings you’ve applied on the mobile app will be saved and used on your other Bluetooth sources.

TESTING
It took me a day (on and off, not intensely) to set up the earphones as I had to update the firmware and take photos of my ears for the 360 Reality Audio function. The number of available settings is also quite big so I spent some time carefully going through each one of them.

Bluetooth range and connectivity were good. I could pair them with my laptop in the room and walk around my small house with minimal connection dropout. There were some random hitches and drops but I couldn’t seem to reproduce them consistently so it could be some stray software issue.

The XM4s are great sounding TWS earphones, and the gripes I have with them are mostly on the usability side.

The Adaptive Sound Control mode was probably a good idea during development, but in real world testing, I found it interruptive. When I put it on for my evening jog, it activated the Ambient Sound and whenever I stayed still long enough, the Noise Cancelling mode would kick in. Every time it switched modes, the music was lowered and there’s a notification chime.

However, when I put them on for grocery shopping – where a lot of time was spent alternating between walking and standing browsing the aisles, the mode would switch constantly. That means the music will be lowered, the chime will ring, and then your music returns. Every single time.

Once or twice was fine but it was incessant. I opted to turn off the chime (thankfully), but the constant switch between noise cancelling and ambience was still intrusive to the whole listening experience so I turned off the Adaptive Sound Control altogether. I did not turn it back on for any situation because I would need to launch the app to toggle it. I find tapping on the left earpiece manually was a lot easier and I had more control.

Speak-to-Chat is also still clunky and doesn’t work effectively in noisy environments. Sometimes, it doesn’t trigger when you’re in, say a supermarket, and it’s better to just either take them off or touch the left earphone to enable it manually.

When Speak-to-Chat kicks in, it will wait for 15 seconds before resuming playback. Most times, it felt like an awkward amount of time to wait for your music to restart. It took a while for me to adjust.

The bulbous shape was also a little awkward to put down when I wanted to leave the XM4s for a moment. Both earpieces tend to roll around and face downward, and this position triggers the sensors to detect as if the earphones were being worn and playback would resume. I had to be conscious with how I put them on my desk so as not to trigger the sensors.

For the first week, my ears were always sore due to the size of the earpieces. I got used to them later and could wear them for prolonged periods… but those with small ears, beware.

There is also no multi-pairing support so you’ll need to choose it manually whenever you switch between devices.

Throughout testing, battery life was impressive and met specifications. I regularly reached between seven and eight hours of playback on a single charge and the case allowed me to charge the earpieces two more times before requiring charging. I could go for three to four days before needing to charge the earphones fully.

With this laundry list of complaints, it might sound as if I didn’t like these earphones, but truth be told, I really do. In short, they sound amazing, and there were moments when I wondered if I had enjoyed another pair of active noise cancelling TWS as much as I did the XM4.

Switching between the Ambient Sound modes does not alter the sound quality, save for some bass attenuation when you turn on Ambient Sound. They do sound a lot better at louder volumes, because at low levels, there was some clipping in loud passages where the drivers required more power.

The XM4s have the usual Sony house sound and a fun V-shaped signature. With their warm tonality, the XM4s are a forgiving pair of earphones. They also have no background hiss to speak of. Greek God by Conan Gray sounded rich and mellow, his “esses” having just a touch of sibilance but nothing overbearing. All of the instruments were coherent, some of the bass notes tend to bleed a little into the mids but it is a given when it comes to TWS earphones. Lows reached deep and sounded full.

The upcoming James Bond soundtrack, No Time To Die by Billie Eilish also sounded ethereal. Leading notes from the synths by Finneas seemingly appeared from a pitch-black background. Treble sounded airy with good extension, I could also hear in detail her raspy breaths in between the crescendos of stringed and wind instruments towards the end, but piano notes decayed a little faster than I am used to.

Ruel’s vocal on Hard Sometimes was rendered beautifully. There were some parts where I could feel the emotion from the crackles of his voice, especially on the lines “I’ve been on the road, I’ve been missing home” and “Don’t mean to come off cold, I don’t wanna be alone”.

If The World Was Ending by JP Saxe and Julia Michaels started the recording with a higher background noise than usual, so the XM4s rendered a faithful reproduction of the track. It retained that garage band/bedroom recording feel in the first half of the track while transitioning to a more refined recording towards the end. The track might not have a stellar mastering but it was enjoyable on the XM4s.

Upon trying out the 360 Reality Audio function from Tidal, I quickly realise they sound a lot like binaural recordings. Since they’re digitally mastered to surround your head, the quality varies so there’s a lot of hit and miss. Some of them sounded very distant, especially Pink’s live recording of her All I Know So Far album. Sexual Healing by Marvin Gaye was portrayed splendidly so I am certain this feature has a charm to it.

Take Five by Dave Brubeck was sort of interesting, but the panning between the left and right instruments was far too wide and left me feeling like I was standing on the stage instead of sitting down at the seats. Space Oddity by David Bowie sounded like it was played back on an array of speakers with varying quality, arranged in a parabola around my head.

The XM4s already have a beautiful soundstage, with instruments positioned properly within their spaces so the 360 Reality Audio function to me felt more a novelty than an upgrade.

THE LAST WORD
After my minor usability complaints and turning off the superfluous features, the XM4 turned out to be a very enjoyable pair of TWS earphones. I regularly used them when I went out for evening runs since they are splash proof. Once properly fitted, they stayed put no matter how vigorously I tried to shake them off.

Sony has hit a home run with the sound quality and unrivalled active noise cancelling on the WF-1000XM4 IEMs. They sound amazing and certainly a step up compared to their predecessor, but do check on the fit because it took me a while to get used to the size of the earpieces.