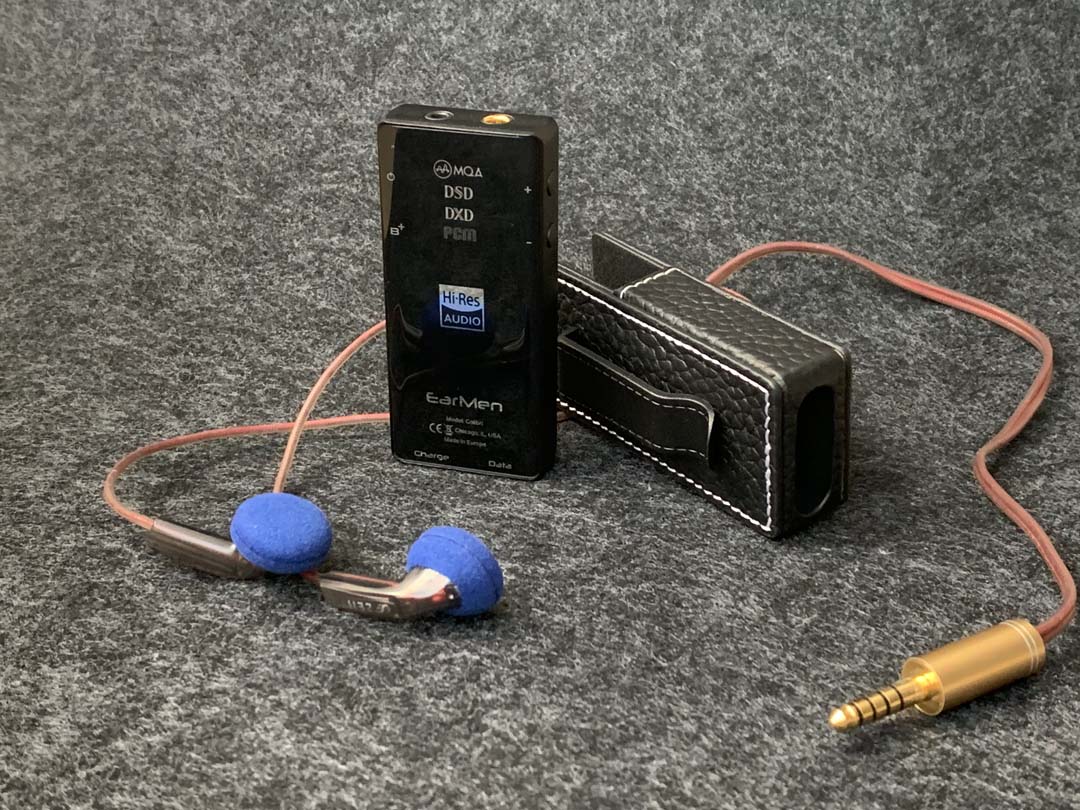 BY now, EarMen shouldn’t be a stranger as we have covered its products quite extensively. Recently, EarMen, a sub-brand of Serbia-based Auris Audio, launched another portable DAC/headphone amp, aimed at those looking to drive their 4.4mm balanced headphones with a little added power via an internal battery.

The EarMen Colibri is yet another name that follows the bird theme (like Sparrow and Eagle), and although it is the larger model between the three, it really is still tiny. Measuring at ​​ 77 x 35 x 14mm, the Colibri is roughly narrower and longer than a match box. Provided in the box is a hard leather case with a clip, and a braided USB-C to USB-C cable, and some minimal documentation.

Situated on the unit are two USB C inputs; one exclusively for charging and the other exclusively for data. At the other end, there is a 3.5mm unbalanced and a 4.4mm balanced headphone out. For controls, there’s a volume up and down button as well as a power/play/pause button and a bass boost button. For status display, the logo lights up in various colours to denote whether you’re listening to DSD, PCM, or MQA.

SETTING UP
With my Mac Mini, the EarMen Colibri works as a plug-and-play device. The time between boot up and music playback was mere seconds. The device’s usability made me a happy camper, but familiarising myself with the controls took a little while.

The input and button labels are situated at the back of the unit, so you’ll have to choose between looking at the status LED colour or the labels. It’s a little worse when the unit is housed inside the leather case because it covers all the labels. I presume you’ll get used to the navigation after using it for a while, but you’ll be making a few mistakes until then.

I managed to squeeze out between four and five hours of battery life for every charge. To end this, I connected both the charging and data cable – it worked fine but now I had another cable running across my desk!

LISTENING
The EarMen Colibri started to sing almost immediately once connected, and it does sing very well. Out of the 3.5mm jack, I couldn’t detect any hiss on my sensitive headphones (JVC HA-S500 and Final Audio Pandora Hope VI) while the harder-to-drive Sennheiser HD525 needed to be driven between 70% to maximum volume – depending on the track – to reach my listening levels.

I tested its 4.4mm balanced output with a pair of VE Clan Zen earbuds. These do need some extra power to reach their maximum potential but the Colibri breezed through it like a natural.

With Tidal playback, I was greeted with a full, rounded and rich sound from the Colibri. Although it is not as powerful as the TR-Amp, the sound signature does feel a little more refined.

While the resolution and the ability to resolve micro details leaves a lot to be desired, the tuning is enjoyable and fun. It does gloss over harsher details in the music, so it is quite forgiving when it comes to poorly mastered tracks or hot ear-piercing passages.

The bass boost is such a fun feature to have (because come on, sometimes we all want that extra boom). While the lower midrange texture remains fairly untouched, I could feel the rumble injected into the song so artistes like Doja Cat, Billie Eilish, and Bella Poarch were very fun to listen to with the bass boost turned on.

I did experience some technical difficulties throughout the testing period with the Colibri. Sometimes the system recognised it as an output but there was no sound. There were also times when my computer decided to disable volume control altogether causing the device to play at max volume. Reconnecting the device once or twice usually fixed it, but I found myself needing to turn it on and off while reconnecting to look for a combination that worked.

I understand that it is almost impossible to test connectivity issues with every single system available, so although I wouldn’t put the blame solely on the device, I thought it was worth mentioning.

Another issue I have is with the volume control. The volume buttons adjust your system’s volume, not an internal preamp or such. That itself is not a problem, but to render MQA on TIDAL you would have to enable “Use Exclusive Mode” in the settings. This setting defeats the system volume control – and by extension the Colibri’s. This is a much smaller issue if the Colibri is connected to a phone or dedicated audio player (DAP) instead.

THE LAST WORD
When it works, the Colibri sounds natural and has a pleasing timbre that’s also present in the company’s other DAC/amps. Build quality is also a huge plus considering the machining process involved carving a single aluminium billet into shape. I certainly love the front and back glass plates, too, which lent a premium feel to the small device.

Would I recommend this to everyone? Of course – but with some reservations due to its battery life and connectivity. Perhaps EarMen could improve upon the connectivity issues present in this otherwise amazing device.