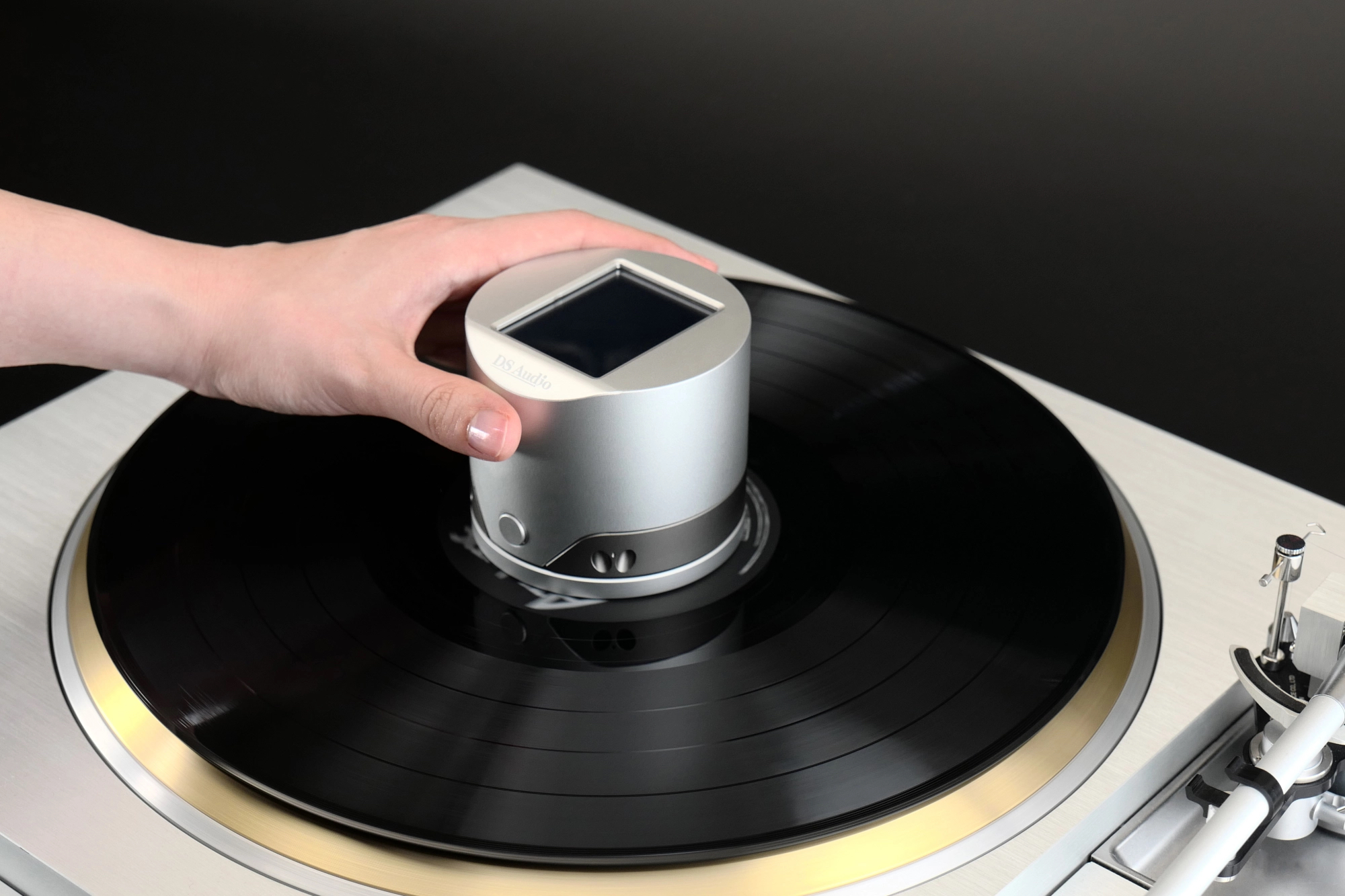 THE wonderful thing about vinyl playback is that, however much you think you’ve got it right in your set-up, something comes along to prove otherwise… like the ES-001 “Eccentricity Detection Stabiliser” from Japanese marque DS Audio, best known for its optical phono cartridges.

What is this “eccentricity”, you ask? Well, it’s something that prevents your vinyl record from achieving its full playback potential. Put simply, the speed-stability performance of a record depends on a number of parameters in the pressing of the vinyl, and there are imperfections in the process.

As DS Audio explains it: “Take, for example, the positioning of the stamper plate, which creates the record’s groove (which is of course different for each of sides A and B), and also the spindle hole at the centre of the record. While both are very precisely stamped and cut, neither can ever be ultra precise in the way that, say, a hard metal can be precision-machined – simply because in this case, we’re dealing with a lump of vinyl.”

So most records rotate very slightly eccentrically, but even this very slight variation makes an audible difference to the sound – a difference you may only notice once you hear its absence.

“The overall ‘wow and flutter’ (speed error) of one’s entire system cannot be significantly reduced unless the eccentricity of the record is corrected,” says DS Audio’s Tetsuaki Aoyagi.

“With an eccentricity value of, say, 0.34mm, even if there is no inherent wow and flutter produced by the turntable in use, it reaches around 0.15% on the innermost grooves of the record’s playing surface. In reality, however, the average speed error of even the highest quality turntables is around 0.008%, so these factors combined can result in an overall wow and flutter value that audibly affects sound quality. In order to faithfully reproduce the source material, it’s therefore imperative to reduce a record’s eccentricity as much as possible.”

“First, the unstable rotation causes fluctuations in pitch across the whole frequency range. Second, the cartridge and tonearm are forced to sway from side to side as they follow the groove, impairing the stylus’ ability to accurately track the groove and resulting in a muddy sound with an unstable sonic image. As a result, the full potential of even the highest quality system will not be experienced by the listener unless the record’s eccentricity is corrected.”

And the solution from DA Audio is the the ES-001.

According to the press literature, “the ES-001 is designed to address the problem by measuring, and then correcting, the record’s rotational stability. First, it projects a light onto the run-out groove to measure variation in speed stability. Second, it guides you to adjust the record’s position so that it is perfectly centred and there is no more eccentricity. Simple and effective!”