Sony LinkBuds S – an oasis in the sonic chaos 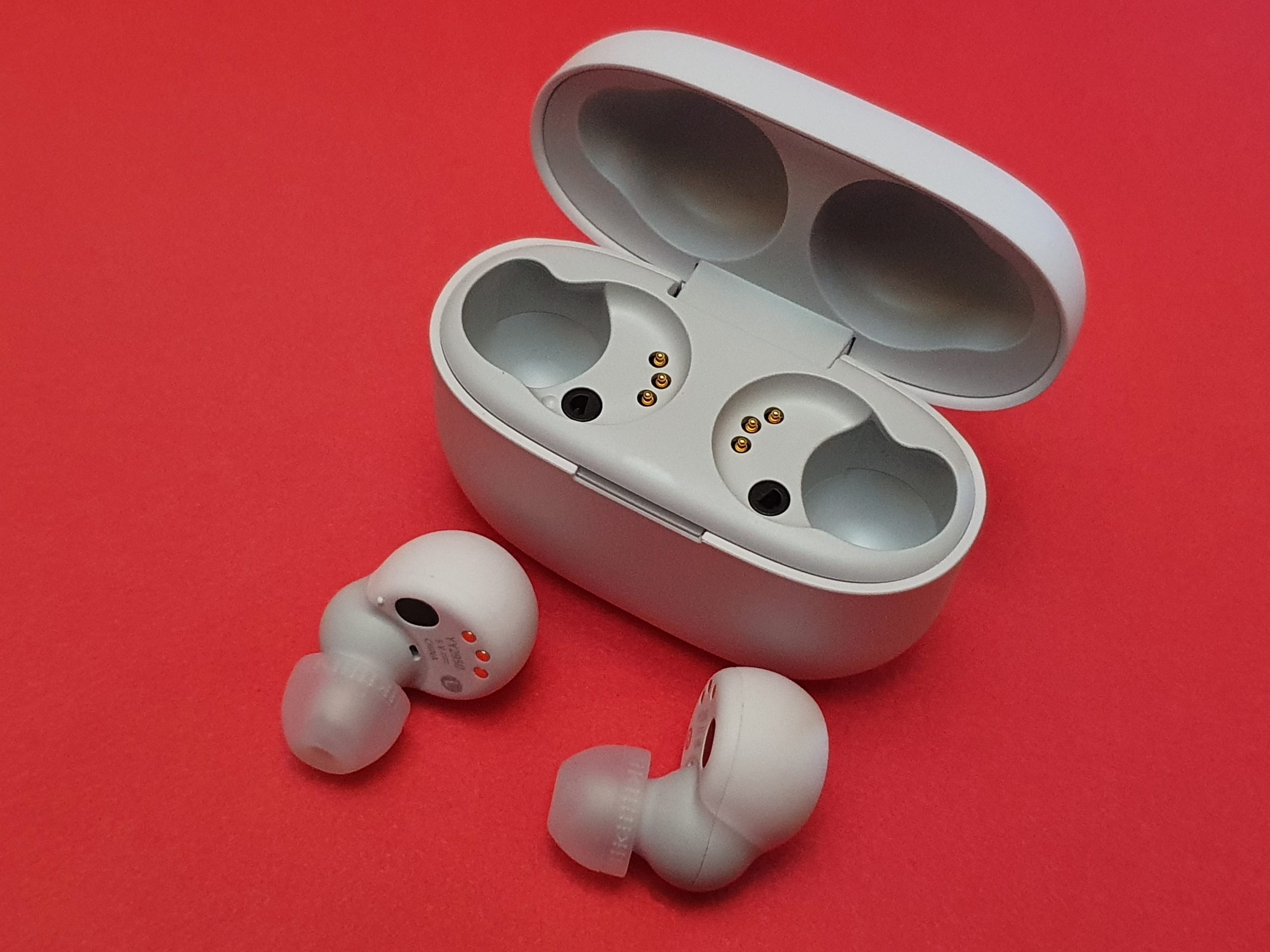 + Extremely small and comfortable; packed to the brim with functions like noise cancelling, ambient sound, companion app, etc; consumer-tuned sound will appeal to the masses; clear microphone.
– No wireless charging; sound quality is average; no multi-device pair support; sub-par call quality in noisy environment; plenty of serious contenders at this price point.
Sound: 7/10
Value: 8/10
A guide to the ratings

Shortly after releasing the WH-1000XM5 Bluetooth over-ear headphones Sony introduced the successor for its donut-shaped LinkBuds true wireless (TWS) earbuds – the Sony LinkBuds S. Unlike the predecessor, the LinkBuds S is a much more conservatively designed pair of TWS earbuds. Bonus points – the name is actually pronounceable compared to the 1000X models.

The LinkBuds S is very small with each earpiece weighing around 4.8g. The case and the earpieces are made of lightweight recycled plastic with matte finishing. Although I was worried about staining my white loaner unit, I’m happy to admit they look pretty clean after weeks of daily use, so Sony has hit a home run with its material selection.

The earbuds came in an all-paper box with the documentations and accessories tucked neatly in cute mini “drawers” which to me enhanced the unboxing experience.

Inspecting the retail box revealed a total of four silicone ear-tip sizes and a short USB-C charging cable. Unlike foam ear-tips (like those on the WF-1000XM4), silicone is a lot more durable and longer lasting but falls short when it comes to sealing – so you win some, and you lose some.

The earpieces are touch sensitive for quick and simple navigation during use, and depending on the chosen functions (assignable via the Headphones app), you could tap on the back surface to play/pause, toggle between ambient and noise cancelling, skip/previous, and set volume adjustments.

Unlike the LinkBuds, the LinkBuds S utilises a more traditional 5mm driver featuring high-compliance diaphragms while the brain of the system is Sony’s proprietary V1 integrated processor.

For those who are prone to sweating, don’t worry because the LinkBuds S comes with an IP rating of IPX4. I wouldn’t recommend swimming or dancing in the rain with these but they would do fine in the gym or running.

SET-UP
The LinkBuds S were my close companion both at the desk and outdoors. Due to the pandemic, my office opted for a hybrid work schedule so we only go to the office three days a week – as a result, there has been a lot of driving, train rides, and walking. Because of the small and light charging case, I barely noticed it was there.

LISTENING
Right off the bat, the LinkBuds S earbuds are bassy. There’s plenty of rumble if the music calls for it so watching movies with this is amazing, to say the least. Pop tracks by Doja Cat, Billie Eilish and Bella Poarch were rendered with full and rounded bottom end. Some of their tracks don’t have huge expansive soundstages or wide dynamic ranges but with the LinkBuds S, you’re not missing out much.

Vocals are sort of a hit-and-miss with these as they’re very warm and leaning towards the low end. This meant Adele’s voice sounded a lot thicker than usual, but Gregory Porter sounded surprisingly good since his voice is accentuated positively by the LinkBuds S. There’s a bit of a veil in the midrange that pushes singers a step back from their stage – but it is subtle so I’m just nitpicking here.

The LinkBuds S presented a polite sound signature with no harshness in the treble where it rolls off earlier than other higher resolution earphones or headphones. What this means is there’s less air around instruments, the track Opium by Dead Can Dance being a good case in point. I used to be able to swim around in the expansive soundstage but the presentation with the earbuds is lacklustre.

As we move on to Enter Sandman by Metallica, I really enjoyed it when the drums started to kick in at around 15 seconds. For the rest of the song, all of the micro-dynamics in the music are present but instead of looking at them through a microscope, the LinkBuds S gave me a magnifying glass. I thoroughly enjoyed the track but was left with wanting more.

FEATURES
Fit, size and battery life
The LinkBuds S is very small and very comfortable to use. I used the M-sized ear-tips as I find they seal the best. There were times when I was on the train or walking and had mini heart attacks because I thought they fell out of my ears before realising I was still listening to music.

The touch-sensitive areas are well placed so you’re less likely to navigate by accident when you adjust or wear the earbuds.

Sony quotes a six-hour battery life for the earbuds and an additional 20 hours out of the charging case. I found this to be accurate as they could last me through the day at the office. Charging is only required after about five or six days but I can see some people would need to charge more frequently. It’s a shame there’s no wireless charging at this price point when something like the AirPods Pro has it.

Noise-cancelling and ambient sound mode
If you’re buying a pair of active noise cancelling (ANC) earbuds, chances are you’re around loud and distracting environments a lot. I’m always surprised at how loud air conditioners and the white noise levels are in buildings when I turn off the ANC.

The ANC is great at silencing low frequency rumbles but struggles a little with higher pitched sounds – so the grumbles of trains are lowered to manageable levels but you can definitely hear the metal wheels screeching on tracks. Living beside a main road, the noise-cancelling feature is a saviour for me… until a two-stroke motorcycle revs down the road. Other than that, the LinkBuds S insulates me from the crowd while immersing me in my music.

Turning on ambient sound in the office helped with being alert, and the environment sounds felt natural enough. But when you compare it with the AirPods Pro, it sounded a little more processed. The AirPods Pro’s transparency mode was a lot more natural and closest to not-wearing-earbuds.

Being very small, the earbuds do not stick out at all so wind noise is minimised compared to the much larger WF-1000XM4. Perhaps that’s why the companion app for the LinkBuds S doesn’t have the wind noise setting. Walking outside with winds ranging from a gentle breeze to a windy day is less disruptive due to its low profile. I can’t believe I’m saying this – the LinkBuds S is aerodynamic, you guys.

Connection and single-side use
Connectivity is solid and the range is respectable. There was once or twice when one side disconnected but taking it out and re-wearing it fixes the issue. Aside from that, I did not experience any dropped connections from any of my devices. Walking away from my phone or computer maintained signal integrity and the connection only dropped once I walked around a wall or went too far, say 10m.

I am quite let down by the fact that they only pair to a single device, so keep this in mind if you want to switch between phones and computers.

Sensors on the earpieces detect when you wear them so they will play/pause automatically. Sony has also improved upon the proximity sensors so they are less likely to turn on when you put the earbuds on the table, unlike the WF-1000XM4. And since the earbuds connect individually to your source, you can effortlessly use each side independently.

Speech and voice calls
The improved microphones on the LinkBuds S sounded good during Zoom and phone calls which I attribute to the Precise Voice Pickup Technology. Although good, they don’t do well in noisy environments and I had trouble talking to my friend when I was in the gym with techno blasting through their PA speakers.

For some reason, my iPhone XS never sets the earbuds as the default device for calls so I had to take out my phone to answer and switch to the earbuds every time.

THE LAST WORD
Being the world’s smallest and lightest, noise-cancelling, Hi-Res truly wireless earbuds are major highlights for the LinkBuds S but it came with a reduction in fidelity. But for the 99% of their users, it won’t matter. I wouldn’t be able to pick out the individual strings in Vivaldi’s Four Seasons when I’m riding the train, or notice Diana Krall drawing her breath in Live in Paris when I’m in my noisy office, no matter what headphones I use.

I sat in my quiet room and listened to the LinkBuds S to detect the subtle nuances within the sounds, but this is not something you should do with these buds. They belong out there in the busy streets and noisy train tracks. They’re here to make your chaotic day a little better

Well, at least they did make mine great!