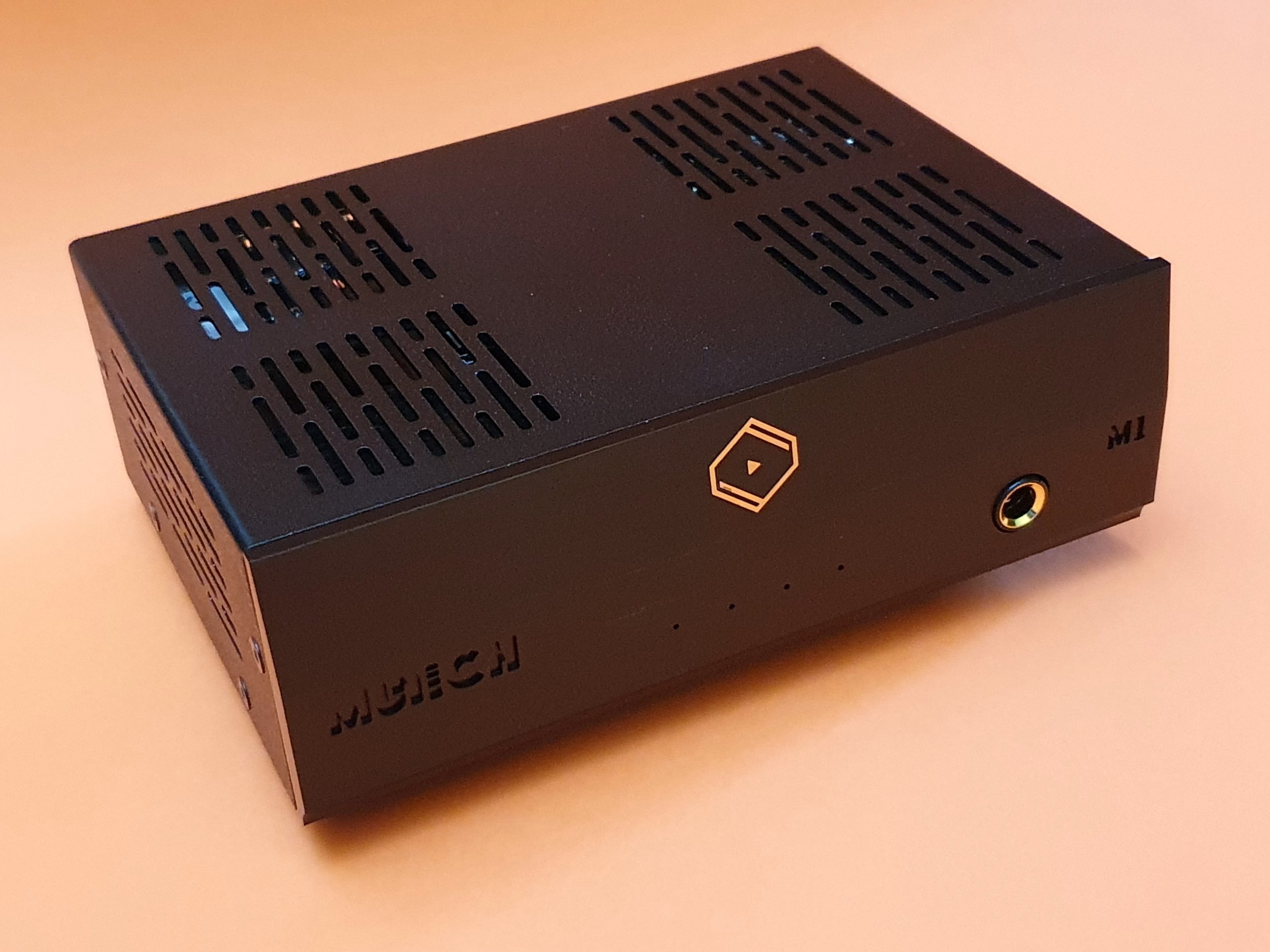 + Great connectivity, both physical and via a network; SPDIF/Toslink/USB out functionality makes for a versatile digital streaming transport; clean and detailed sound with a large soundstage and neutral aural profile from the internal DAC; headphone output is solid, but not spec’ed to drive power hungry headphones such as planar magnetics.
– A little bland and unexciting though its internal DACs; not entirely intuitive in operation, requires some knowledge of digital audio streaming concepts; no physical control buttons on the box; not quite as easy to use as other mature streaming platforms.
Sound: 8/10
Value: 7/10
A guide to the ratings

SILENT ANGEL burst onto the hi-fi scene relatively recently on the back of the growing interest in network streaming. They have a suite of products for the streaming aficionado, including streaming transports, network streamers with inbuilt DACs, audiophile network switches, linear power supplies, music servers and storage. The designs blend DNA from the networking/computer side (and indeed, the streamers are based on Raspberry Pis) and the hi-fi world with tweaks and nods to power supplies, DACs and analogue stages.

The Munich M1 is a compact streaming unit, with a very comprehensive set of socketry on the rear, accepting SPDIF, I2S, AES/EBU inputs as well as a network socket to access network streaming services – its primary raison d’etre. In addition, there are two proprietary expansion sockets and two USB 3.0 and one USB 2.0 Type-A sockets. The USB 3.0 sockets are meant for connection to music files on hard drives or SSDs whilst the USB 2.0 socket is meant to drive a USB DAC. The internal DAC is well specified and can handle PCM data up to 768kHz sampling rate and DSD up to 11.2MHz. The USB output can pass MQA data, but the internal DAC cannot decode MQA. Interestingly, Silent Angel does not state what DAC chip or technology is used in the M1.

The heart of the Munich M1 is a Raspberry Pi board running an operating system dubbed ViTOS. Downloading the companion VitOS Orbiter app to manage the M1 offers a lot of functionality, allowing you to link your Munich M1 to Qobuz, HighResAudio and Tidal accounts. You can also browse DLNA servers on your network on this app, though using a dedicated DLNA streaming control app can be a more elegant way to operate in this mode. This app also allows you to control the output of the Munich M1, directing the digital data to the USB output.

The Munich M1 is also a fully fledged Roon endpoint, and there is Spotify Connect on board, but there isn’t any Tidal Connect at present – I hope they do provide this later.

1. As a streaming DAC to my primary system consisting of an EAR 859 SET amp and Audio Note AN-E speakers.

2. As a streaming transport driving a Mytek Brooklyn DAC+ via the USB 2.0 output, and again into my EAR 859 amp and Audio Note AN-E speakers.

3. As a streaming headphone amp to a pair of Grado Hemp headphones.

The unit was principally connected via wired Ethernet via its Gigabit ethernet port. I used Roon to listen critically, but I also tested it as a DLNA renderer as well as Spotify Connect.

LISTENING
I started with the unit streaming Spotify via Spotify Connect – probably the most convenient way to start using the unit. Right from the start, the unit showed a very clean and neutral balance. As background listening, the unit was super relaxed and allowed for many hours of browsing whilst I was working. Rhythms were on point, but there wasn’t a particular sense of urgency to them, unlike some other DACs which I have heard.

Switching to Roon for more critical listening, I started out with some DSD material in the form of Radka Toneff’s Fairytales (Single DSD Rip from SACD), which the M1 rendered in a very calm and clean fashion – vocals were clear, but could have been projected a little more on The Moon Is A Harsh Mistress. Top end textures were delicate, though the bottom end was not as fulsome as with other DACs I have tried.

Switching to some modal jazz, Miles Davis’ classic Kind Of Blue (24/192 FLAC file from HDTracks) – again there was plenty of detail, and Miles’ muted horn stayed the right side of sibilance. Rhythms were correct, though not as defined or propulsive as with other DACs I have used. Textures in John Coltrane’s sax were also well defined, if not quite as vivid.

Next up was some rock/pop in the form of Dire Straits’ Money for Nothing (Single DSD rip from SACD), known for its drawbacks from early digital production. The M1 again rendered a very listenable version, where the midrange was not unduly glassy or harsh. Rhythms, again, were present and correct, though there wasn’t quite as much energy, especially on the drum solos. Similarly, vocals were a tad recessed and did not project quite as far into the soundstage.

I switched gears at this point, using the ViTOS orbiter app to switch the output from the inboard DACs to the USB output, and connecting a Mytek Brooklyn DAC+ to the indicated USB-A output to drive a DAC. I ran through again the tracks above and there was an immediate lift in energy, with a little more detail. Rhythms too came alive and had more life and propulsion to them. I can only conclude that the internal DACs are a little too polite for my tastes, though this is largely a sin of omission.

CONCLUSION
The Silent Angel Munich M1 is a competent and nicely appointed streaming unit, which certainly is a real piece of hi-fi, but I can’t quite get past the fact that although it’s thoroughly pleasant and doesn’t do anything wrong, neither does it really excite the heart.

Therefore a very qualified recommendation with the knowledge that there are competing products which have a little more verve as well as ease of use – such as the Bluesound Node (2021), which has been reviewed here.