First impressions: Of the turntables in recent time I have had the pleasure of listening to, the VPI Traveler must be the heaviest of the lot in its price class­ – it certainly sets the current benchmark for grams-per-buck for its price, by my reckoning.

The likes of price rivals like the Rega P6, the Thorens 309 and the Clearaudio Concept never topped 10.5kg, which is slightly below the full fighting weight of the Traveler. The Technics SL1200, had it still been available, probably would have had something to say about this, I suppose.

It would be simplistic to equate mass with value, but we somehow inevitably instinctively do just that (well, to some extent anyway), and one never feels shortchanged when picking this turntable up. It is solidly put together in a place called Cliffwood, New Jersey. That’s right, folks, this here American turntable is truly and proudly put together in the US of A, and not in an off-shored outside contractor’s premises somewhere in Mexico or a South American or Asian country. 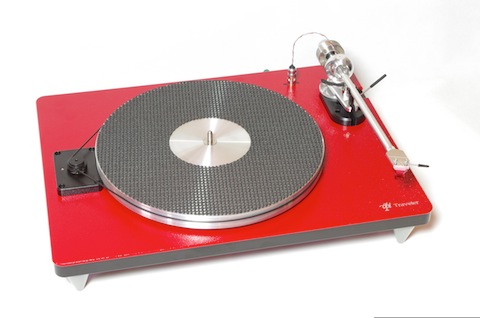 Specs: The Traveler is belt-driven, with a 600 rpm low-noise AC motor directly mounted on the plinth. One has to manually move the belt between two steps on the motor’s pulley to switch between 33 and 45rpm.

While the review sample came in matt red, the manufacturer’s website indicates one may order it in a variety of colours (for an extra charge), including pink and gold apparently. Looks like VPI has noticed the success of rivals Rega and Pro-Ject, which also provide multi-colour options for some of their offerings. One suspects a Stars-and-Stripes answer to Rega’s Union Jack option can’t be very far off. 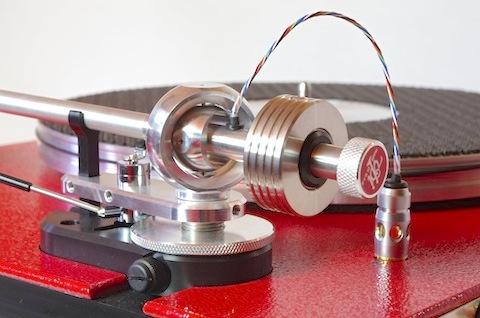 The fit and finish of the Traveler are to a high standard. The plinth is a rounded-edged rectangular block which consists of a substantial aluminum top plate affixed to a thick non-metallic lower base, the latter looking and feeling like some kind of polymer. Some online reports indicate it is black acrylic, but it sure doesn’t look so to me. Others suggest it is Delrin. If knowledge of the exact composition of the material makes a difference to you, feel free to investigate further, but for me “some kind of dense polymer/plastic” will do just fine.

And if mass is an indicator of value, some take length to be an indicator of performance. While it’s not true in many cases (… of course not!), those who didn’t habitually doze off in geometry class will be aware that, in the case of a pivoted tonearm, length does matter in minimizing tracking angle distortion. No, you don’t get the aspirational 12-inch tonearm, but you do get an extra inch more than the nine-inch nails … er, norm, in the form of the Traveler’s incorporated 10-incher, with low friction spring loaded sapphire gimballed bearings (the arm assembly being removable).

The Traveler’s arm moved freely in all directions, free of any obvious bearing anomalies which could be detected by handling, but it didn’t, in my view, have the same silky feeling as when handling a (much more expensive!) Rega RB1000. Arm height is easily adjustable for changing cartridge VTA/SRA. There is no tonearm cable for direct connection to your phono input, the internal arm cable interfacing with a female RCA phono jack pair junction, with ground lug, for the user to select his own applicable interconnect. 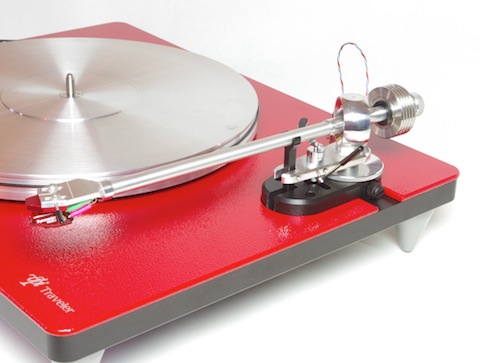 The platter is a solid well-machined affair, made from aluminum damped with stainless steel. Free spinning of the platter indicates a high-quality bearing, taking quite some time to reach back to standstill. The platter mat is of rubber-like, anti-slip, shelf liner variety. The drive belt goes round the perimeter of the platter and the fixed motor and its pulley sits at the nine o’clock position when the turntable is viewed from the top front. The circular-profiled belt seems to be some sort of synthetic rubber and not one of those semi-transparent silicon types beloved of a particular German rival of VPI’s. The left side of the Traveler will have to remain accessible to the user in practice because that’s where the power switch is located.

The motor block’s electrical inlet accepts standard IEC power cords and since these are detachable, the user is free to experiment if he feels that fancy power cords just may do something for improving the performance of the motor. Four aluminium cone feet (height adjustable for ease of leveling) which have some sort of miniature polymer balls at their indented tips allow for the Traveler to stand tall and firm on the platform it is placed on without scratching the latter. 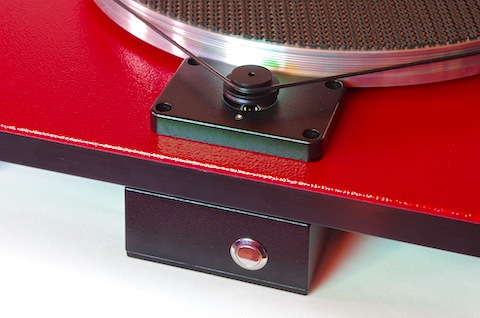 Performance: With a Dynavector 10×5 high output moving-coil cartridge fronting the Traveler, the turntable combo’s sonic performance certainly lived up to the expectations that its weight and robust physical appearance created in this user.

I would characterise the sound the VPI design team seem to have aimed for as one which throws out a big acoustic, impressing in terms of depth and breadth, with sharply focused image outlines within it being a priority.

Bass had impressive depth and slam, tight as an avid exercise buff’s tushie, and with a dexterity (the bass, not the tushie) that would certainly put the Traveler, if not in top spot, then at least among the podium finishers of the turntables I have heard in this class so far for this aspect (a particular Acoustic Solid model, I can’t recall the exact model number or name of, is to my memory and subjective opinion, at least, the Traveler’s equal).

In terms of the Traveler’s ability to convey dynamic swings on demanding musical programme, results from Decca’s Kenneth Alwyn and the London Symphony Orchestra’s rendition of Tchaikovsky’s 1812 Overture were indeed quite outstanding. Any foot-in-rest mode moments were quickly up-ended when the programme material demanded it.

A good focus also characterises the midrange, fine details of the ability of class musicians in handling their instruments with impressive technique and finesse proving quite captivating. While the images created were of nice convincing density, I did feel here that the midrange could be slightly dry in character, but I suppose this could easily be mitigated by a richer sounding cartridge than the 10×5. 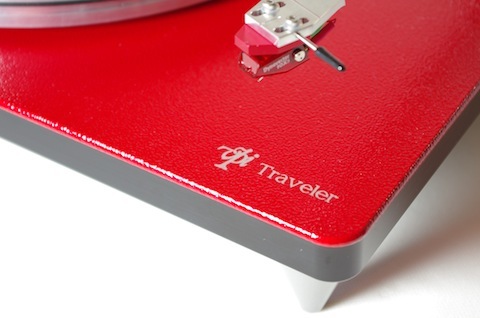 Treble was well resolved, but I was perhaps getting too much of a good thing from this combination in that, while there was lots of air and atmosphere, there was also a slight suspicion of treble etch setting in, which tweaking of the arm height couldn’t quite eradicate. Some solo violin tracks caused me to almost expect the sound to tip over into a screech. I found substituting the stock shelf-liner mat with the felt mat of a Linn Sondek LP12 to bring a welcome sense of moderation to the highs, without losing much detail.

In terms of speed stability and noise, nothing untoward is to be reported here, the Traveler doing a very impressive job keeping piano fade outs nicely stable.

Seeing the 10×5 at the end of the Traveler’s arm caused me to recall my extensive time with it in another turntable-arm combo I previously owned, the Roksan Radius V (which later versions have now, sadly, skyrocketed in price). I recall the latter to sound more organic and graceful as a combination. While the VPI is by no means clumsy, it doesn’t give the same sense of effortlessly going about its business. It’s a bit like comparing Roger Federer’s movement around court to, say, Rafael Nadal’s. You can’t accuse the latter of being clumsy, but he is what he is, a big hitting, hard running fella whose efforts show up simply as that, relative to “effortless”, and that’s just the impression I couldn’t shake with the Traveler-10×5 combination.

I’m not advocating that one turntable is necessarily better than the other because tastes and priorities vary, but conveying that each does have its characteristics and getting to the bottom of it is not easy as what one is hearing is effectively the sum of the parts that makes up the turntable combination. I certainly rate the VPI Traveler highly but would perhaps investigate a warmer sounding cartridge than the Dynavector, which was the review sample supplier’s choice.

In use, I also got subjectively better results from the Traveler being sat on a rigid platform than one where some kind of compliant material featured (eg a pneumatic platform), Again, this is where users’ preferences will inevitably differ, but the fact that the differences were quite noticeable suggests the soft-tipped coned feet still do “read” the characteristic of the surface the Traveler is placed on, affecting the stylus-groove interface. 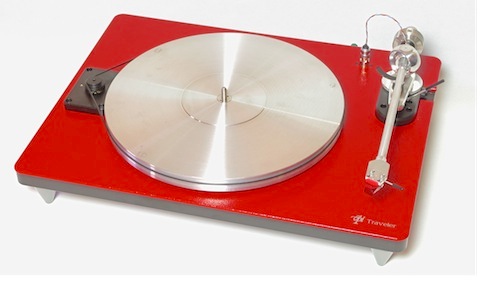 The good: Excellent, no nonsense, sound, ease of set up, solid build at a very competitive price (in the local context, the dealer’s sticker price is never to be taken at face value – you (and he) knows there’s some leeway to be applied here). What more can one ask for?

The ungood: If there was a particular dislike I had about the Traveler, it would be the non-slip shelf-liner material mat, which had a tendency to stick to the bottom of the LPs after play, but would then fall off-centre back onto the still rotating platter, almost as if intent on doing malice to the stylus sitting innocently at the business end of the tonearm.

Another minor failing was a rather squeaky motor start up, though I suppose this would irritate some more than others.

Final verdict: This VPI is a serious contender if you’re shopping in this price region. I can imagine it handing you a business card reading “Have Arm, Will Travel”, and standing ready to gun down your analogue audio gremlins and let you get back to the business of enjoying your music if you’d put your money down for it. An excellent turntable, fully competitive with anything available presently in its price range, and perhaps even above it.

Lim Juan got into hi-fi for the same reason a good many (but not all) of us did – the love of music. He grew up on gear his dad had. His mother used to work in a record shop where dad bought his LPs, so the seeds of addiction were set before he was even born! A lot of guitar-driven rock stuff shaped his tastes, and which he today still remains partial to, even though his palette has always been eclectic. He is now somewhat past the stage where high-end audio’s big brand names and fancy casework cause him to drool (though not completely out of it!). His day job in the corporate rat race keeps him busy and listening time is scarce and available mostly in the late nights only. He has two children, one plays the cello, the other the violin, and he attends classical concerts ‘somewhat regularly’.