MY flirtations with computer-based audio have been sporadic, although you’d think that the Linn Majik DS and two iPods hooked up to my hi-fi system would have spurred me to move in that direction by now. Call it starting problems… but that changed recently.

I can’t say exactly how it happened, but perhaps it was the promise of new and affordable toys that effected a shift in my perceptions recently… or that I had a fairly new and mostly unused Toshiba laptop and was wondering how to make it useful.

First, I did a bit of reading up, then I downloaded foobar 2000 (with relevant components) and ripped some of my CDs. These done, I started looking around for the right gear to make it all sing. The first to come my way was Italian outfit M2Tech’s HiFace DAC, a device fashioned like a flash drive that plugs directly into the USB output of the computer. Yes, like the popular AudioQuest Dragonfly, the first to adopt this form. 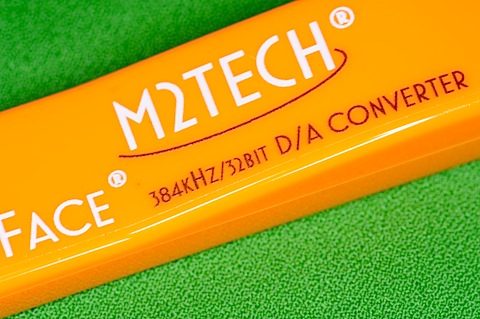 BITS AND PARTS: The HiFace, in M2Tech’s jive, is a high-end asynchronous 2.0 Audio Class USB DAC capable of outputting up to 32-bit/384kHz resolution – on paper, it appears over-specified!

If you’re a Mac user, it’s plug and play once you’ve configured the machine accordingly; Windows users will need to download the relevant driver from the M2Tech site. A learning process for me, but I got things working pretty smoothly first time around,

My sole reservation at this point was the output socket of the HiFace – a 3.5mm mini-jack receptacle. For the very serious, this entails customising interconnects with wires of your choice or procuring a cheap mini-jack-to-RCA adaptor. I also recommend placing a support under the HiFace – bits of rubber or cardboard will do, for a start.

The output level is a traditional 2.0Vrms and M2Tech claims the unit uses very low jitter oscillators and an asynchronous 2.0 Audio Class USB. It will drive most medium- or high-impedance headphones.

No external power supply is needed as the HiFace runs off the USB bus and has internal regulators.

The HiFace is slightly larger than your typical thumb drive and weighs a measly 20g. Easily lost, although the orange finish, which you either love or hate, makes it highly visible. 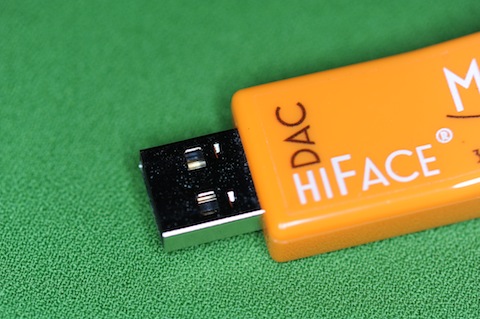 IN CONCERT: There are two aspects of the HiFace to be explored – one, as a headphone amp, and two, a standalone USB DAC. I’ve yet to build references for my computer audio gear and so borrowed a HRT Music Streamer II+ for comparison in the latter context. My headphones, an AKG K-44, were plugged into the computer’s direct audio output and then to the HiFace for an easier A-B comparison.

The difference when using the headphones was significant – the HiFace was more detailed and balanced, my Toshiba laptop’s output sounding brighter and thinner in comparison. The HiFace had limited volume headroom, though, being fussier about headphone matching. My AKGs are entry-level, but the HiFace still made its sonic benefits obvious – it sounded richer in textures and better fleshed-uut in its sound staging.

Purely on sound, I’d opt for the HiFace here, but the insufficient gain with my cans bothered me.

The HRT comparison was a closer-fought match. The Streamer is a reference product in its category, showing up a wealth of clean detail, but I felt the HiFace possessed something more organic and visceral in its overall presentation.

The orange unit sounded more lush, with better air over the treble frequencies, although I can’t say there was much to choose between both in the bass and mids. If you like a richer texture and warmer instrumental timbres in these areas, the HiFace is the pick. The HRT gives it a tough fight in the areas of detail and clarity, but there is a gap in technology between both – the HiFace came out last year, the Streamer II+ is older by quite a bit.

I found the HiFace to have more urgency in its delivery, with better slam and grunt in the lows… it never seemed to be holding back, while the HRT showed more restraint. In the end, I found myself turning to the HiFace as my first choice each time, preferring its immediacy over the HRT’s more measured approach. 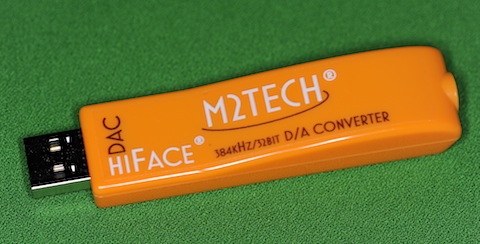 APPLAUSE: As direct competitors in the context of form, the acclaimed AudioQuest Dragonfly units are cheaper – but the HiFace is more future-proof. It overcame whatever reservations I had about entering the computer audio arena, turning me into a covert within a few hours. So yeah, it’s fabulous sonically.

BUT… : It does look cheap – plastic usually does – and it doesn’t do DSD (which USB DAC at this price does, anyway?). And I doubt it’ll take heavier interconnects, while careless owners can lose it easily because its size.

FINALE: What’s there not to like about the M2Tech HiFace DAC, if you don’t mind the bright orange garb? It contrives to sound more analogue-y than it has any right to be at this price and mostly succeeds. Importantly, it has set me on the path of computer audio with a high-resolution vigour! Leave it to the Italians…