MANY audiophiles keep trading up in the belief that the costlier the equipment, the better it performs. Then, there’s the rare hi-fi enthusiast that, because nothing in the market satisfies him, goes ahead and builds his own product.

“I created the prototype to the Kronos as a kind of a quest,” says Louis Desjardins, the man behind the turntable that, in the short span of four years it’s been in the market, has chalked up some impressive credentials.

“It was a hobbyist’s quest, it wasn’t a business. The idea was more of a curiosity, a hypothesis. But in a short amount of time, it became a business quest, because the prototype was so successful, people told me I should bring it to the market.

“We felt that there was something that Kronos had that was not in the marketplace. It was completely really new, different,” he adds. 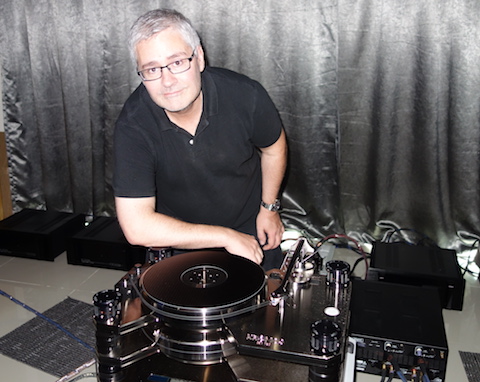 Thus, did the Kronos Limited Edition turntable make its bow at the 2012 Consumer Electronics Show (CES). The suspended design was unique in that it sported two identical platters, one above the other, rotating in opposite directions, and each driven by separate motors.

There’s a precise science behind the design, explained Desjardins, who was in Kuala Lumpur recently. Vibrations are the bane of turntable design, and these, of course, are detrimental to sound quality. Desjardins believes a suspended design best eliminates external vibrations from other equipment, like the speakers.

This, however, isn’t the end of the story. A single platter, mounted on a sub-platter, creates torsional forces while in motion, which affects the level of performance the cartridge and tonearm can otherwise deliver. Eliminating this, via the use of the counter-rotation platter, leaves the record spinning without being subjected to any vibrations whatsoever, within and without. (More details can be had at the Kronos website).

Desjardins illustrates this while playing an LP. It took a hard jolt for the cartridge to stutter, otherwise, even with a firm tap, the stylus sat solidly in the grooves, with nary an interruption to the music.

In fact, Desjardins believes the significant step up the Kronos represents in analogue playback should make it qualify as a “new format”. 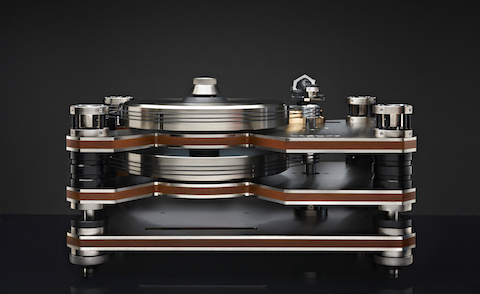 Bold steps in analogue
The Montreal-based Desjardins, 56, has been in the audio business for a ridiculously short time – just five years – but “I’ve always been an audiophile, since I was 13 years old.” He studied physics in college, in his words, “the science of waves, the physics of sound waves and vibrations.” Then, he worked in photography and high-resolution options for more than two decades, before taking that big step into the world of the hi-fi manufacturer.

One wonders – wasn’t it a risk to take on the world of high-end audio at the age around 50… a world whose motoring equivalent is the segment dominated by Ferraris, McLarens and Bugattis?

“Yes, it was a very bold step to take, very scary, but I felt that because the product had a real benefit, something substantial, and that we could have a patent on it, that it wasn’t an unduly stupid risk to take. It wasn’t a careless risk. It was a calculated risk.”

The concept of twin platters in counter-rotation isn’t exactly new – the 4724 Koma turntable offered by 47 Laboratory sports this. However, Desjardins is quick to point out that his design offers the additional benefit of a suspended design, which he believes has superior isolation properties than any non-suspended design

“There are two kinds of turntables in the world. The ones that use counter-rotation. And the other ones.

“We have a patent on a suspended turntable with a dynamic stabiliser using counter-rotation. We are the only one.” 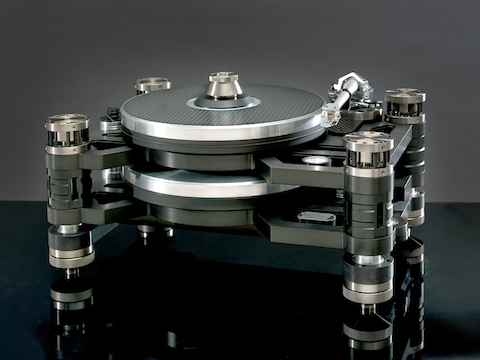 The turntables
The Limited Edition was to have a run of only 250 units, and while it has yet to make that figure, it is now designated the Pro, followed by two trickle-down models, the Sparta and the Sparta .5.

The Sparta, says Desjardins, shares many common parts with the Pro and gets the listener close to the sound of the flagship model – the plinth design/material is the main difference. It made its debut at CES 2014, and the .5 at the Munich show last May (it is already shipping).

Kronos turntables are being sold now in 10 countries, with some 200 units having shifted since the start. The .5, the single-platter entry-level Kronos turntable is for those who aspire to most of the company’s technology but can’t afford a Sparta or Pro immediately.

“People were asking us for a less expensive turntable. I did not want to jeopardise the quality so the idea is that they don’t have to buy the whole turntable at once.

“They can start with the .5 and then, they can buy the second platter (with motor) later for a full Sparta unit. There’s no compromise in the quality of the components they’re buying when they’re buying the .5.”

Desjardins is at pains to explain that premium parts are used in the manufacture of his turntables parts – the motors are from Switzerland, the belts and phenolic material for the plinth are from the USA and just about everything else is out-sourced to Canadian outfits that have a couple of workers dedicated to making parts for the Kronos. All the assembly is done in-house and each turntable is tested for a period of five days before it is shipped out to the dealer.

The recommended Black Beauty tonearm, built in Canada by one Andre Theriault, will cost an additional US$8,500 (for the 12-inch version), but Desjardins is not saying other tonearms won’t work

“We provide a variety of arm boards, and the turntables will work very well with a Rega or SME tonearm, for example. Of course, a better tonearm will make it sound better, but you can upgrade later,” he assures.

It seems most Kronos customers prefer the Black Beauty – 85% of them, actually.

Desjardins’ belief is that, when the turntable is free of any external or internal vibrations or resonances, then the tonearm and cartridge will perform as they should, optimally (he likes ZYX and Air Tight cartridges).

“Get the turntable right, that’s the most important part,” he stresses. 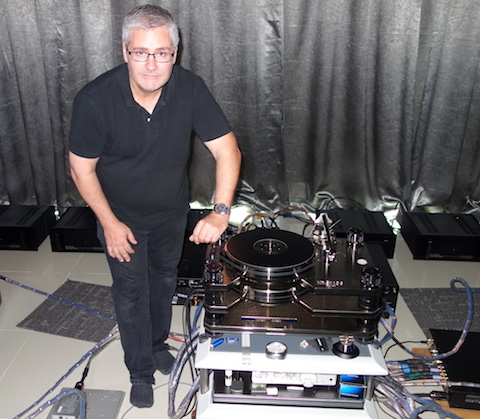 Market inroads
Obviously, his biggest market is North America, and next year, there will be a focus on the European markets. What has surprised him is the level of enthusiasm shown in Asia for his turntables.

“Asia is a very active market. Asians are very excited about highest resolution and highest performance audio. They’re not afraid to try a new technology if they understand that this new technology has got benefits.

“The US has been a really great market, we’ve won awards at every show that we do. As for Europe, certain markets are good and for 2016, we’ve got Vitus as distributors. I think 2016 will be a big year for Kronos.”

Building credibility
Often, a high-end product looks the part, argue as audiophiles may over its audio merits. Some of the esoteric turntables in the market are complex machines, requiring vacuum pumps, dedicated stands and delicate hands to elicit optimum performance.

The Kronos turntables, in comparison, sport a more utilitarian design and if you thought this could turn off the punters and press, you’re far from the truth. The recognition has been plentiful and the list of awards is long (36 so far), despite the relative newness of the company, which has spent very little on advertising.

“Kronos has spent almost no money on advertising. Our turntables sell through word of mouth, through awards at shows and through reviews. We’ve been reviewed more than any turntable in the market out there. The reviews have been saying that our product is the best product available in high-end analogue playback, regardless of price.

“How do you build true credibility? Well, you win the race on Sunday. You build the best car, you go racing and you win the race! We rely on the press to be objective and open-minded, to be appreciative of our efforts.” 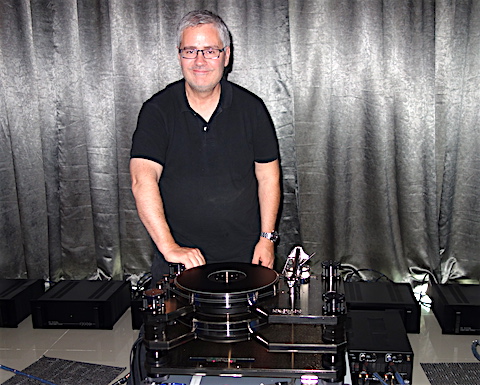 The audio business
Has it paid off so far, in the context of a business?

“Audio is a great business to make great friends but it’s not the easiest business to make money. The high-end, by definition, is a very limited edition production, we do not built turntables that end up at Walmart or chain stores. There’s a lot of time involved and follow through.

“You invest a lot of your time, making products in small quantities. However, since the first year, the company has been turning a profit. Maybe that’s also because I don’t pay myself. I have two full-time staff.”

There are a couple of new Kronos products to be launched early next year and perhaps a year after that, but Desjardins isn’t saying much because he doesn’t want to make promises and then have something along the way change his plans.

“If you want a Kronos turntable, get one one, no need to wait. All our products are, and will be, retrofittable if there are any upgrades.

“It is the last turntable you will ever need to buy!” he says, confidently. 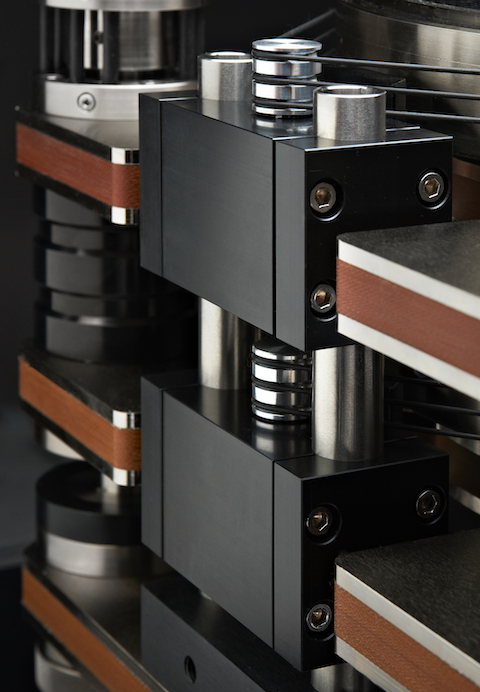