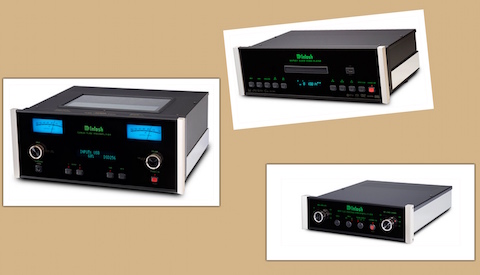 The C2600 builds on its predecessors, the C2300 and C2500, which were among McIntosh’s most acclaimed tube preamps in the modern era. The C2600 features the best of those models, along with upgraded tube circuitry and digital section. Provided are 16 inputs for all analogue and digital requirements. Three balanced, four unbalanced, and a phono section with dedicated MM and MC inputs complete the analogue side. As for digital, you get three optical, two coaxial, one USB and one McIntosh-exclusive MCT connection. It will decode DSD – the on board DAC is a 32-bit/384kHz unit compatible with DSD64, DSD128 and DSD256 plus DXD 352.8kHz and DXD 384kHz. Headphones output and home theatre Pass Thru round up the versatility of the C2600.

The MP100 has both MM and MM inputs with six adjustable load settings; balanced and unbalanced analogue outputs; optical, coax and USB digital outputs; and a mono switch. Yes, you can rip your vinyl to digital with the MP100 – with the right conversion program, the MP100 can convert analogue signals to digital, via USB and a computer. Digital output is set at 24/96.

The MVP901 is a Blu-ray player with the ability to upsample 1080P and lower resolutions to 4K Ultra HD video. Built-in decoding is provided for Dolby® True HD and DTS-HD Master Audio™ , and there’s also compatibility with Dolby Atmos, DTS:X™ and Auro-3D®. It fully supports 3D Blu-ray discs while state-of-the-art processing power allows for ultra-fast playback start speeds. The MVP901 will also play CDs, SACDs and DVD-Audio discs via an eight-channel, 32-bit/192kHz DAC used in stereo quad balanced mode, while the HDMI output can be used for multi-channel music playback. Three USB ports allow playback of audio and video files from flash drives. Network streaming and BD-Live is available through the ethernet connection.