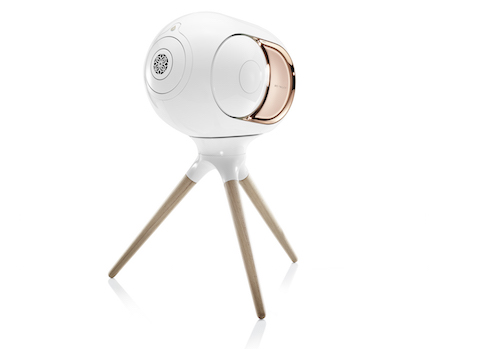 + Effortless, seemingly limitless power. Distortion-free sound even at prodigious volumes. Astounding bass reach and weight, even when compared with full-sized speakers. A joy to use and to see in operation.
–  Does not accept analogue line-level inputs. Digital is limited to PCM 24-bit/192kHz and not compatible with DSD nor MQA – yet. Additional purchase of Dialog needed to access full functionality. Pricey, even in single-speaker configuration, and stereo or multi-channel multiplies the cost (plus that of the Dialog).

SUPERLATIVE – that is probably the best way to describe the Devialet Gold Phantom in one word. From the way it sounds, looks and even how it works, there’s nothing subtle about this little piece of audio jewellery of French origin. In fact, I’m not even sure what to term its Phantom line of audio gear – calling it a lifestyle audio system is an understatement, and it doesn’t quite fit the bill of what a traditional hi-fi system should be. What is clear, though, is that the Gold can easily assume either of these roles.

Even from the way it looks, the Gold is like no other speaker or audio system. Open the very elaborate box and you’re faced with an extremely heavy orb-like hunk of white plastic. Once you manage to manoeuvre its bulk – all 255 x 253 x 343mm (h/w/d) and 11.4kg of it – onto stands (preferred) or a very sturdy surface, take time to marvel at its form. Simply put, it is drop-dead gorgeous. From the intricate metal grille protecting its tweeter and gold-coloured side panels to its two large spherical woofers, all its design lines are supremely elegant and something you can and will proudly show off in your living room. 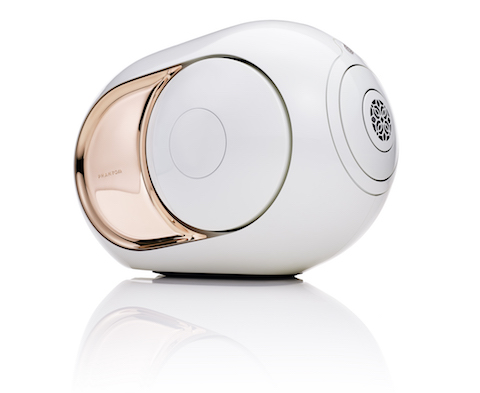 Those who assume its form is nothing more than window dressing, think again – within that slick plastic exterior resides a combination of proprietary technology and innovations that are cutting edge. How much so? Well, the Gold’s all-important power rating is an astounding 4,500W – not PMPO (peak music power output) watts but RMS (root mean square) watts. Devialet says this allows the Gold to achieve sound pressure levels of up to 108dB, which is as loud as a live rock concert!

To generate this massive amount of power, the Gold employs analogue-digital hybrid amplification, termed ADH Intelligence. To quote the Devialet website, this combines “the sophistication of analogue amplification (Class A) and the power and compactness of digital amplification (Class D)”. This power is channelled into a three-way system employing a titanium tweeter as well as an aluminium midrange driver and dual woofers. The midrange driver isn’t immediately obvious and is seamlessly camouflaged into the design – it’s actually the ring surrounding the tweeter. 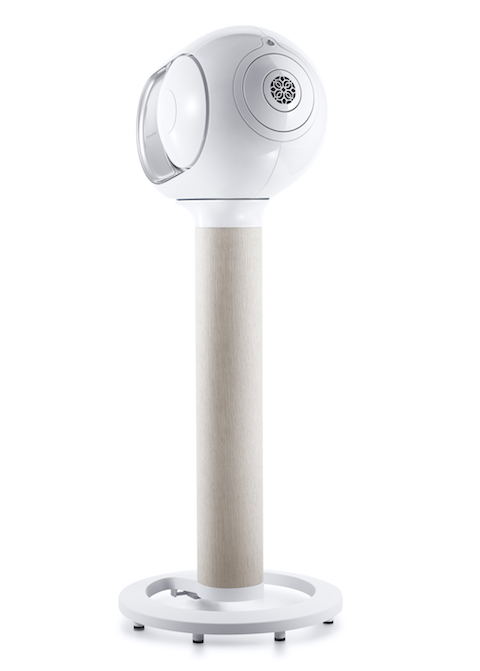 The most eye-catching aspect of the Gold, however, are its woofers, which have very high excursion and visibly pump in and out as they work. These are no ordinary woofers either. Devialet says they are hermetically sealed with 1.2 tonnes of pressure, and are able to withstand the 30kg of thrust generated to achieve the SPLs the Gold is capable of.

Connectivity is via Bluetooth, WiFi, optical Toslink and hard-wired Ethernet but unfortunately, no line-level analogue inputs, so turntable users will need to digitise the incoming signal with a third-party product first. The Gold’s internal DAC is a proprietary module, and compatible with resolutions up to 24-bit/192kHz.

There’s a lot more digital tech in the Gold, so much so that it needs a microprocessor to handle all its functions. Those who want to know more can read the White Paper here. 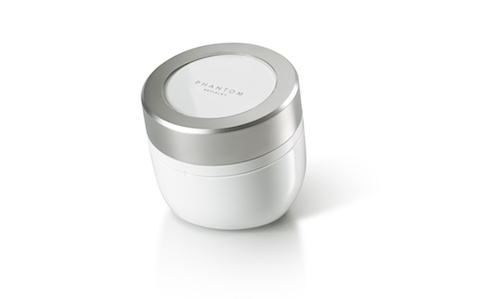 SETTING UP
As glorious as the Gold looks and sounds, the initial set-up process can be tricky. There are no other external controls save for a power button at the rear of the unit and the entirety of its functions are only accessible via the Spark app (available for Android, iOS, Windows and Mac OS). There is a Remote (yes, that’s what it is called) volume-only controller available, but this is a separate purchase (RM800).

You can use the Phantom on its own without the Dialog wireless hub (RM1,700), but using one makes setting up much easier and a lot more fun, too! You plug all your sources into the Dialog, which in turn can connect to a maximum of 24 Phantom units, which can be configured into stereo, multi-channel or even multi-room uses.

Getting all the components paired up and talking to each other is one of the most engrossing experiences I’ve had setting up an audio system. The Gold reacts physically and sonically as you progress through the procedure guided by the Spark app – at one point you have to place a hand on the top of the unit, which then emits a whooshing sound and the woofers pump in and out. To pair the Remote you have to hold it upside down on top of the Gold, which then emits a click as the woofers react once again. Have a look at the videos on Devialet’s YouTube channel to see this in action.

As everything goes through the Spark app, it pays to familiarise oneself with all its workings. It also allows you to use streaming services like Tidal and Spotify, and with once you link your accounts to it, you won’t have to log in every time you turn on the Gold. 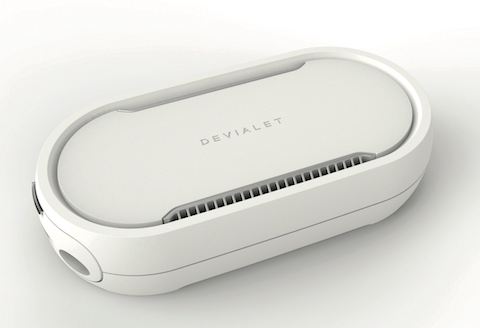 LISTENING
Hearing the Gold in operation for the first time is literally a “shock and awe” experience. You would never expect such a small device to be capable of such ear-splitting volumes and earth-shaking bass, and the way the side-mounted woofers pump in and out to the beat is mesmerising to watch.

No matter how far you turn up the volume, the Gold responds effortlessly, with nary a hint of distortion nor stridency. In fact, you’re more likely to hear objects rattling on shelves – or the drowned-out screams of an irate neighbour – way before you hit the Gold’s limit.

Despite it being a single unit, the Gold sounds surprisingly “big”. It’s a different experience from a normal stereo set-up, but it manages to present the sonic in such a way that fills the room convincingly. Oh, and it actually pays to take some care in its placement in the room, just like you would regular stereo speakers. It won’t help the “soundstage” much, but will eliminate or at least reduce any bass overhang or boom from the room. Devialet offers a few options for stands which will perfectly match the Gold aesthetically, but realistically any good, sturdy stand will do the trick. 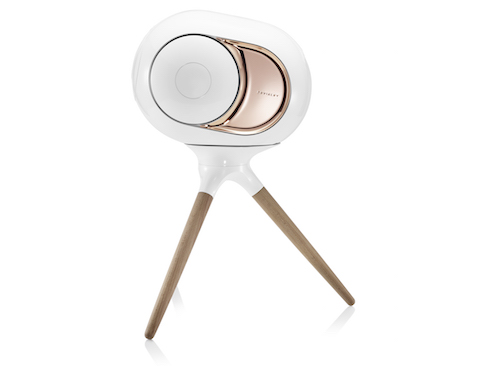 With placement optimised, you will be able to hear the Gold in its full glory. Apart from its high SPLs, the bass will be the next aspect that hits you – hard. Devialet says the Gold is capable of reaching frequencies right down to 14Hz, which is lower than some subwoofers are capable of! I can’t attest if it really goes that low, but the Gold will deliver the deepest bass with amazing control.

Its dynamic ability is also out-of-this-world – I’ve rarely heard such tremendous impact from percussive instruments or orchestral/musical swings. This control and clarity extend all the way from the bass right up to the highest treble frequencies, and the sound is never strident even at loud volumes. I found myself reaching more for music with a “party” factor. This is  not to say the Gold won’t do justice to your fave female vocalist – it does – but it’s just so much more compelling to turn up the dial and be rocked to your core.

THE LAST WORD
The biggest challenge for the Gold Phantom is to convince audiophiles that it is a viable alternative to a separates hi-fi setup. But even with its not-exactly-affordable price, it sounds compelling enough to match an proper audiophile system of equivalent cost – and there’ll be a lot less clutter too!

Admittedly, it’s not the most subtle sound you’re going to hear, but I can think of no other system that would light up a house party like this does. It may not be suited to everybody’s taste, but any hi-fi enthusiast needs to hear the Devialet Gold Phantom at least once in his lifetime.