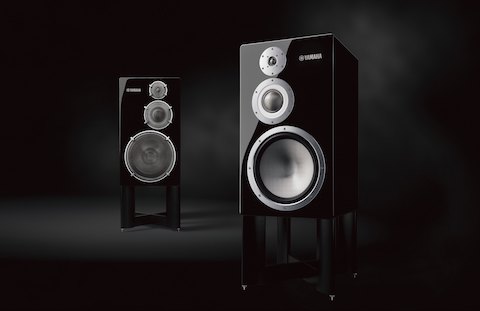 + Clarity, musicality, soundstage, layering of instruments and backing vocals. Excellent tonal truthfulness with very fine rendition of vocals.
– Almost nothing, although may be overbearing in smaller spaces.

YAMAHA is behind some of the most significant speakers of the 1970s and 1980s, such as the legendary NS-1000 series and the NS10M, both of which were widely used in radio and recording studios around the world and graced many homes. I owned the NS-1000m during in the early days of my involvement in this hobby, and it is one of the few products I have regretted selling.

The Japanese company is perhaps the only hi-fi manufacturer that’s involved in the entire chain of music production, from making musical instruments and educating young musicians to producing studio recording equipment and and also equipment for music playback in homes. So one can rightly say Yamaha knows a thing or two about music and the art of reproducing music!

The product under evaluation here is Yamaha’s flagship speaker, the NS-5000, which was launched at the 2016 Tokyo Audio to much acclaim and has since garnered accolades at each hi-fi show it has graced, notably at the recent Kuala Lumpur International Audio Video show. I was certainly very impressed and promptly requested the pair for a review. And so, about a week later, the  pair of NS-5000s were in my listening room.

Unlike other manufacturers of high-end speakers in recent times, Yamaha has stayed with a traditional big squarish box. The uniqueness is in its three drivers, all of which are made from Zylon… “a synthetic fibre of exceptional high strength, having acoustic velocity as well as the ability to reproduce the finest details of audio but without a sharp resonance peak inherent in a hard material”. 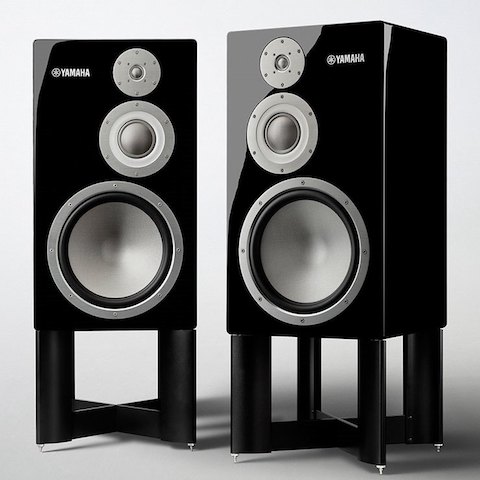 Yamaha says it started developing the drivers using Zylon in 2008, so it’s taken almost eight years for the fruition of the NS-5000. The main benefit of using Zylon, claims Yamaha, is the ability to reproduce the signal in greater faithfulness to the original, and thus be more fully capable of meeting the demands of modern high resolution reproduction of music.

Yamaha has also incorporated its patent-pending R.S Chambers behind the midrange and tweeter units in the NS-5000. According to Yamaha, this effectively negates the use of heavily packed chambers to cancel strong resonances inside the speaker cabinet that would negatively degrade the sound. Yamaha states that the use of the R.S Chambers enables each driver to retain its native flat frequencies so that delicate nuances can be reproduced with exceptional detail and articulation.

The NS-5000 comes in a glorious jet-black piano finish, the finest I have ever laid eyes on. In comparison, the NS-1000 I owned was workmanlike in its finish. Yamaha, being one of the world’s top producers of pianos, knows a thing or two about the sound of wood or more correctly, the contribution of wood to the overall final sound. For the NS-5000, Yamaha painstakingly evaluated and chose eco-friendly laminated plywood made from Hokkaido white birch. Obviously, Yamaha used the same paint, primer and polishing processes employed for its renowned grand pianos.

The Yamaha NS-5000 comes with exceptionally well-designed and strong stands in matching black.

Prospective buyers need to be aware that the specified power requirement is 200 to 600 watts. The speaker has a sensitivity of 88dB and a nominal impedance of six ohms. Overall, these specs would suggest that it is not too demanding on amplifiers as long as the minimum power rating of 200W is met. 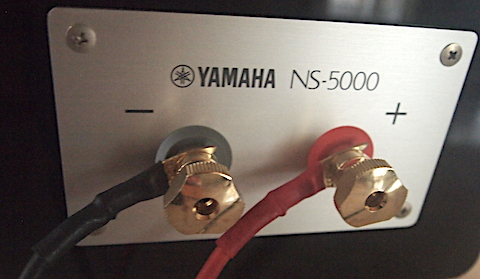 SETTING UP
Placing the Yamahas in my large listening room of 20 feet by 35 feet was painstakingly done by the local distributor. The final position, which was the most balanced with respect to bass, midrange and highs, placed the speakers about seven feet from the back wall and nine feet apart, and slightly toed in.

From the small increments needed to achieve this, it appears that the Yamahas are quite sensitive to small changes in position. Prospective owners would do well to let their dealer handle this dialling in for them as the speakers are not easy to move, being large and heavy… one would hardly want any untoward accident that would result in personal injury or worse, damage the speakers! The payback, however, is well worth the sweat and effort.

LISTENING
Reviewing the NS-5000 is not the usual listen and compare to one’s reference and past experiences with other speakers. Instead, after a few days of just listening without taking any notes, I found the only reference that makes sense is live music.

Fortunately, I had recently been to a live performance by Patricia Barber and so the first point of reference was Patricia Barber’s Companion, a live recording in a small club similar to my live experience. In particular, the second track, Use Me, featuring an extended double bass solo, was most telling. I have never ever experienced a more natural and realistic reproduction of double bass in my listening room. Every nuance and resonance of the instrument, which is notoriously difficult to reproduce, was laid out with full-bodied naturalness and clarity.

Similarly, Ms Barber’s unique voice and piano were reproduced with great fidelity to her real live performance as I remembered it. I suppose there is no better compliment than to say that the Yamahas really do seem to bring the musicians into your listening room, so mesmerising is the reality of the sound reproduced through them. 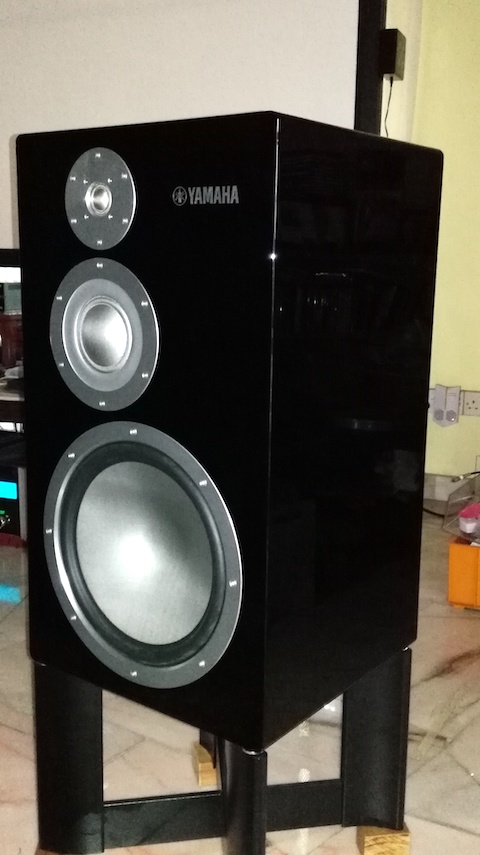 Bearing in mind Yamaha’s background in piano manufacturing, I then played a few selections of solo piano and piano concertos and ensembles. Ashkenazy’s recital of Chopin nocturnes, in particular No 20 in C Sharp Minor, was most lyrical and the tone of the piano was rendered most beautifully. Lang Lang’s rendition of Chopin Piano Concerto No 1 (this piece was used in the Japanese drama Nodame Cantabile) was both majestic and alluringly musical, the Vienna Philharmonic Orchestra strings in particular rendered with substantial body and sweetness.

Moving on to Fourplay’s Chant, the bass line was full of energy and carried the music wonderfully. I normally find Fourplay boring in their technical perfection but through the Yamaha NS-5000, I found my foot tapping and my head bobbing with the music!

With James Taylor and Diana Krall, there was a natural liveliness to the vocals that again I have yet to encounter in all my years of this hobby. Similarly, YoYo Ma’s playing of Ennio Morricone’s Gabriel’s Oboe was simply divine in the truthfulness and timbre of his cello. Saxophone from Sonny Rollins, John Coltrane and in particular Ben Webster had that elusive brash brassiness that closely resembled the real live instrument.

The Yamaha is rated to go down to 26Hz and it shows when I played some organ music. But it is in the mid-bass region that the Yamahas excel in. Bass guitar from Marcus Miller and Nathan East were phenomenal in their attack and speed and yet remained well controlled with starts and stops rendered better than I have ever experienced. On Lee Ritenour’s Am I wrong from Six String Theory, the bass line was almost deadly.

The Yamahas also excelled at presenting a very natural soundstage with deep layering of instruments. Images were rounded as what one experiences in a live performance and there was no shortage of the subtle details that tell one that humans are involved in the music making. In particular, symphonic music were very well served with the entire orchestra seemingly in the listening room and instruments positioned clearly in their respective places. Lower strings, especially, had weight and clear timbres.

Fittingly, I played, at the end of my review, Ella Fitzgerald-The Johnny Mercer songbook. With a big band backing her with aplomb, the track Too Marvellous For Words said it all for the truly wonderful experience of listening to the NS-5000.

THE LAST WORD
Yamaha’s new flagship is definitely more than a worthy successor to the legendary NS-1000, taking its performance and finish to an altogether new level. Musicality and naturalness are of the highest order. They are also very easy to live with – during my time with them, I could listen for long periods and still long for more!

If you are in the market for a high performance speaker at any price level and if your room can accommodate their size, ignore this at your peril. The Yamaha NS-5000 is not just another hi-fi speaker, but a musical instrument of the best quality!