OWNING a home theatre system has become more affordable, but the challenge of space is still the main issue faced by most AV enthusiasts. The soundbar, an alternative to the conventional surround set-up, was introduced to the market back in 1998. Today, the soundbar has come a long way, with updated features to complement ever-growing digital technologies.

Earlier this year, Sony launched a new series of audio products which included the soundbar featured here, the HT-MT500. It is a 2.1 channel compact soundbar that is intended for the minimalist. At just 50cm in length x 6.4cm in base and height, it is easily comparable to the size of any decent centre channel speaker. 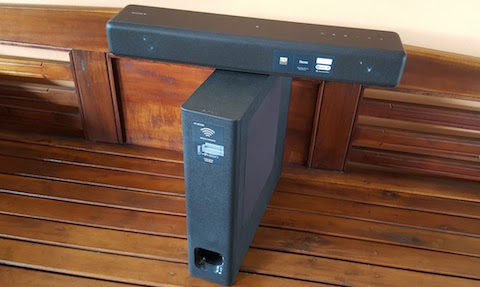 The system includes a separate wireless subwoofer designed to operate horizontally or vertically. It is slim enough to be placed under a sofa and has a special feature called Sofa Mode to optimise the bass response and avoid bloat.

However, the compact housing does not mean Sony has slimmed down on the features. The MT-500 offers three inputs – optical, 3.5mm aux in and a USB port, on top of wireless LDACTM Bluetooth and WiFi connectivity. However, there is only one ARC equipped HDMI output to connect to your TV to aid in controlling and setting up the sound bar.

With no HDMI input, note that there is no video signal pass through.

On top of these, this soundbar is also touted as meeting Hi-Res Audio specifications. One unique feature, to me, is the proprietary LDAC Bluetooth connectivity which allows three times higher data transmission over conventional Bluetooth. LDAC can maintain maximum bit depth and frequency range of 24-bit/96kHz during transmission. Big difference compared with a near-CD quality down-converting transmission.

Although this is a 2.1 channel system, the soundbar comes with an S-Force PRO Front Surround to virtually recreate the surround sound, for HT enthusiasts who want a more immersive movie experience. 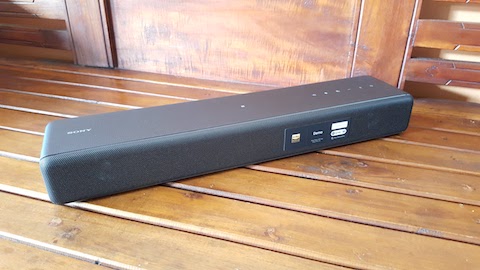 The same with Bluetooth and online music streaming services such as Spotify and Chromecast. Using your mobile phone or tablet, just follow the step-by-step instructions and you will be enjoying wireless music within a few minutes. The NFC feature allowed me to connect my Sony Xperia XZ by just tapping the unit with my phone.

Connecting to my home network was also easy and quite similar to any commercially available audio player. Once connected, the soundbar will be able to scan through any NAS (or in my case, my 1TB built-in Sony HAP-Z1ES high-resolution audio player) for all available digital files.

Not much calibration needs to be done except for the subwoofer volume, which is actually a handy feature to get the right amount LFE, not only for the movies but also stereo audio playback. 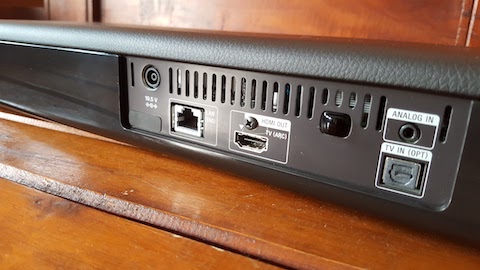 LISTENING
As Pirates of the Caribbean: Dead Men Tell No Tales was showing at the cinemas at this point review, I decided to re-watch the first installation, The Curse of the Black Pearl.

I had to connect the Oppo UDP 203 4K BD player via optical in order to enjoy a Dolby Digital or DTS MA sound. With the subwoofer volume set at “8”, the LFE was sufficient to feel the grunt of canon shots from the pirate ships. I placed the subwoofer at the rear part of my hall and I must say, the wireless connectivity was flawless. There was no delay between the sound and the bass impact.

The soundbar reproduced a high clarity dialogue channel. Even during a noisy action scene where canons were shot, the dialogue channel remained clear with the voices of Captain Jack Sparrow, Barbosa, Will Turner and Elizabeth Swan. Long gone are the days where soundbars suffered from compressed dialogue.

Although the system delivers quite a fulsome frontal sound, the surround effects somehow did not create the immersive, cinematic ambience that I experience from dedicated surround speakers. The overall sound can be heard to be coming from the front including the surround sound itself.

Moving to two-channel audio for music gave me a better perspective of the offerings of this system. I can’t compliment enough on Sony’s connectivity effectiveness. I could easily browse through my high-resolution music collection on the 1TB HAP-Z1ES located downstairs. Within seconds, I got to hear the playback of DSD files via this soundbar.

Having played wireless streamers for nearly 10 years, I find that this soundbar streams big DSD files effortlessly over the home network compared with some other hi-fi brands. No drop in signal, so more fun to listen to. 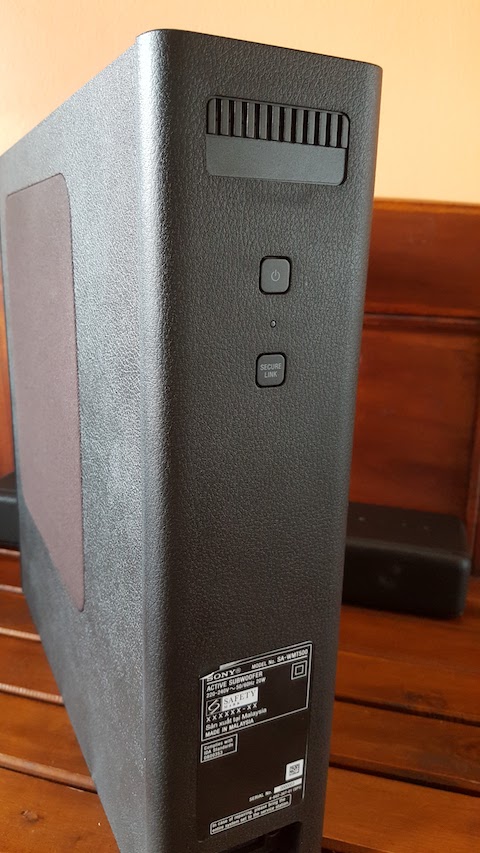 Playing Dave Brubeck’s Time Out, I found that the soundbar system dug quite deep when it came to bass extension. As two-channel music reproduction does not need surround effects, the delivery of the hi-res content was quite impressive. The soundbar easily filled my hall with good audio quality. To further confirm what I heard, I then switched to LDAC Bluetooth connectivity via my Xperia. Playback of the same DSD track from my phone was more in-depth and alive.

With the DSEE HX upscaling features, playback of some 320kbps MP3 files on a thumb drive also benefited from quality restoration. I Just Can’t Stop Loving You by Michael Jackson sounded more refreshing with the compression taken away. Even the low volume intro of the song can be heard with better ambience. I believe that even Spotify playback benefits from this DSEE HX engine.

THE LAST WORD
If you are looking for a simplified, music-first-movie-second solution for your home, give this soundbar a shot. Although dialogue clarity is exceptionally good coming from a small box, I must say that I am leaning more towards stereo audio as the strength of the HT-MT500. Given it is equipped with DSD playback capability and the DSEE HX engine, I can happily do some easy listening of my audio collection for a few hours. I do believe this system works better in a moderately sized room and not in larger living rooms.

Based on the manual, there is an option to add a pair of wireless dedicated surround speakers. Maybe with this, the HT-MT500 soundbar will become a more complete alternative package to a full blown home theatre set-ups.