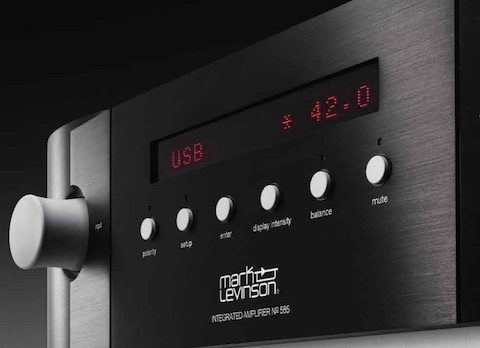 + Excellent all-in-one package with a very good DAC, and  fine balance of power and finesse. Highly musical. Well thought-out user interface with excellent remote control.
– Slightly breezy character gives impression of some lack of body in bass, but which may not be an issue with appropriate speaker choices.
Sound:  9/10
Value:   8/10

THE Mark Levinson No585 integrated amplifier, which has a DSD-capable DAC on board, is a huge beast and weighs a back-breaking 32.6kg!

The fascia, in the unmistakable black with white accents, is a model of elegant simplicity, with a centrally-located LED screen and a set of  controls placed in a visually balanced manner.

At the back, inputs are neatly laid out in similar manner. Instead of descriptive labelling, RCA and digital inputs are numbered, and the user can assign names to each. There are altogether three RCA inputs, one XLR input and six digital inputs.

A pair of RCA line outs enables connection to subwoofers.  The No585, however, has only a single pair of speaker outputs but the “Hurricane” binding posts are to me the easiest-to-use terminals I have experienced, enabling a good and tight connection with spades and banana plugs without too much effort.

SETTING UP
Setting up the No585 was easy as everything is accessible and well spaced.

Initially, I connected my Sony HAP-Z1ES player using my usual RCA cables but this became clearly an issue as initial listening told me that the RCA inputs had not been run in and the sound was ragged and sharp.

I confirmed this with the distributor and changed over to XLR cables upon which the sound practically transformed.  I stayed with this configuration throughout the review. 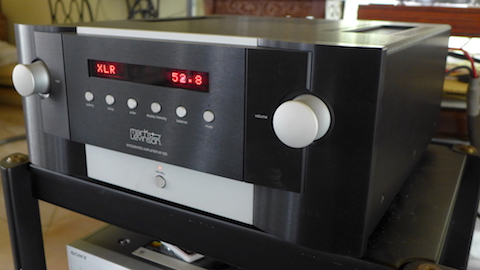 LISTENING
As mentioned above, initial listening through the RCA inputs was rather disappointing, with the sound being ragged and sharp, with a slight tizz at the top frequencies. I mention this again as buyers will need to really give the amplifier a long break-in time for each set of inputs. Switching over to the well-run XLR inputs was a night and day change and my comments in this review on the analogue inputs are entirely based on this configuration.

Let’s get one area out of the way first, the No585 is a powerful beast belying its modest rating of 200 watts per channel into eight ohms.  Readers should take note that this almost doubles to 350 watts at four ohms, indicating the No585’s high current pedigree.

On a Marcus Miller track, Blast from his Free album, his signature low bass was handled with aplomb by the No585 and yet all the nuances of his playing were in fine display. Quite clearly the No585 was equal to the task of manhandling my Magneplanar speakers, exhibiting an iron-fisted control over the proceedings.

However, I felt ultimately the lower bass did not have as much body compared to my resident reference system.  I attribute this perhaps to my having a tubed preamp in my reference system. But this was a very slight difference and once my ears acclimatised, it was hardly noticed; in fact, I found the bass exhibited by the No585 to be very dynamic and tuneful, and I enjoyed the different and perhaps more truthful presentation very much.

The No585 also exhibited very good  imaging and soundstage, and with good live recordings, this ability allowed the music to be virtually playing in my listening room.  The Rodrigo y Cabrera acoustic guitar duo’s Live in Japan recording is a case in point and the rather unusually enthusiastic Japanese audience added to the overall impression of a live performance in my room!

I would add that the ML585 sound signature is very airy – perhaps breezy is a more apt description – and spacious, thus allowing instrument fades to easily be heard in very fine detail. Breath intakes by singers are easily discerned and instead of being distracting, actually add to the realism.  On piano recordings, this high level of detail retrieval allowed for dynamics and nuances to be easily discerned, making the music highly involving.

It is in the midrange that the No585 truly shows its class leading pedigree, voices and cellos sounding ravishing and real. Vocals were realistically forward of the supporting instrumentalists and had real body and warmth.

The Shelby Lynn track Just A Little Bit Of Loving was beautifully rendered with all the details and tonality of her voice being exhibited to fine effect. Similarly, the very dynamic recording by Renee Olstead, Meet Me, Midnight, was swingingly good with the supporting big band quite clearly in great form. The simple ballad Love Me Tender from Elvis was never more touching and endearing than when played through the No585. 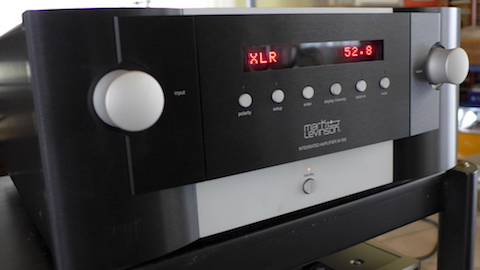 With my Sony HAP-Z1ES configured in streamer mode, I used the No585 in its fully integrated mode, ie digital integrated amplifier. Losing none of the sonic qualities described above, the No585 seemed to be even more dynamic with good digital source materials.  Clearly, ML has not cut any corners with the onboard DAC . The sound quality exhibited is the equal to and in certain recordings may be even better than the Sony’s DAC.

But then, on other recordings, I felt the Sony to be superior. Having said this, I could not get DSD material to be streamed from the Sony to the No585 due to driver incompatibility. I initially also had problems streaming from my laptop but after a firmware update of the No585 and after the usual trial and error, I could stream all kinds of music formats via foobar2000.  This included DSD materials as well.  Using the laptop as streamer, I felt that the music lost a noticeable bit of dynamics but again, once acclimatised, I could sit back and enjoy the music as played back.

After a long period of comparing, I conclude that for most buyers of the No585, the built in DAC is very likely good enough.

Lastly, I also noticed how very quiet the No585 seemed to be, with hardly any discernible noise between tracks.  No electronic or other noises could be heard even with the ears next to the speakers.  Clearly, this contributes significantly to the overall clarity and fine detail exhibited by the amplifier. At the same time, the sound signature is very smooth such that one is always tempted to play just a bit louder.

Dissecting the sound of the No585 into the highs, mids and lows would be an injustice.  The No585 plays music very realistically and truthfully, whatever is the source.

THE LAST WORD
Long having had a preference for using at least a tube preamp in my system, I was rather surprised by how much I enjoyed using the No585 during the review period.

While noticing the very slight difference in sound signature initially, I grew to appreciate the strengths of the No585.  Its power, finesse and detail, and most of all its musically involving nature are compelling reasons to consider the Mark Levinson No585. It may well be the last integrated amplifier you’ll ever need.

Of course, it would not be a Mark Levinson if it did not come with a price tag to match but you must already know that!