THERE’S new kid in town from Audio Analogue,  that Italian manufacturer of fine and reasonably priced amplifiers. The new PureAA line, which is inspired by the company’s Anniversary amps from 2016, enters the stage with the AAcento integrated unit.

According to the press release, ” the PureAA line aims to draw on some of the key ideas and features of the Anniversary amplifiers but to apply them in a slightly different way… while the Anniversary amps are masters of minimalist focus, the PureAA line sports a set of added features designed to appeal to music lovers who seek a wider range of functions and connections in a single product.”

The AAcento is hand-made in Italy and features a zero global feedback design in both the preamp and the power amp stages.

A specifically designed 480-watt toroidal transformer is behind the beefy 100W per channel power delivery. One balanced and three unbalanced line inputs are provided, along with a built-in MM/MC phono stage with switchable subsonic filter, and a high-performance, class A, zero feedback headphone amplifier. All internal functions are controlled by a microprocessor, using relays to select inputs to keep the signal path as clean as possible. 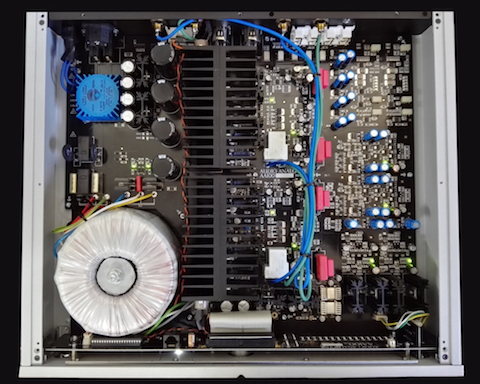 The remote control, while digital, uses no operational amplifiers in its circuitry, and a direct-mode bypasses the volume control allowing the AAcento to be part of multi-channel home theatre system. The amplifier’s high quality casework is resonance-damped.

Also coming soon is the next product in the PureAA line – the AAphono phono stage.