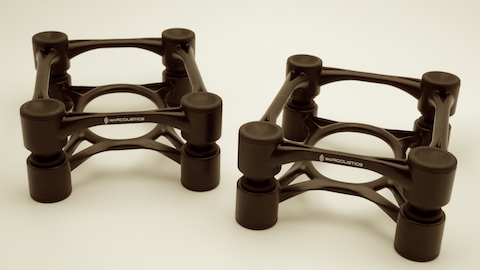 + Easy installation; excellent sonic results; superb if one’s set-up includes a turntable and loudspeakers sitting on the same console-type shelf, as many a “lifestyle” system’s layout does.
– Some would argue the visual effect doesn’t get any more elegant; not the most flexible product of its type – fixed dimensions requires selection to match loudspeaker’s base size, but if you were to then change loudspeakers…
Sound: 9/10
Value: 8/10

LOOKING back at my hi-fi journey over the years, one of the most jaw drop-inducing demonstrations I experienced involved a loudspeaker isolation tweak. It must be a good 20-plus years ago now, but memory of it is still quite vivid. The first generation Sonus Faber Concerto standmount loudspeakers had just arrived and the local dealer had them at the end of some big-arse Krells. Very good sounding they were too (the Krell-Sonus Faber pairing).

He then proceeded to insert some weird contraption of three disc-like items under each loudspeaker and hit play on the CD player. The differences were so profound that only the terminally deaf would have failed to notice. The differences were unanimously agreed by all present to be all-round improvements. The tweak turned out to be the Japanese (now-defunct, I believe) Tri Associates Matrix SP-21 loudspeaker isolation device. Great as its sonic benefits were, this tweak was hopelessly impractical for many as it “floated” the loudspeakers on ball bearings which rendered them vulnerable to being easily knocked over for gravity to do what it (in the “what happens when loudspeaker cabinet meets planet at 9.8m/s/s acceleration” context) does best.

When the editor waved Canadian company’s IsoAcoustics Aperta loudspeaker isolation supports before me, I didn’t need cajoling to agree to test them. Hope of a similar experience as that with the Matrix tweak ran high. The Apertas are sold as a pair and are available in different sizes for one’s chosen loudspeakers. The review pair had dimensions of 155 x 190 x 7.5mm and were narrower than they were wide, indicative of the “professional” background of the company, which had first developed the Apertas for the pro gear market, since desktop home-studio monitors which are wider than they are deep aren’t exactly abundant (as with loudspeakers in the domestic audio market nowadays, for that matter). Made from what looks like aluminium and polymer in an assembled “skeletal frame and tubing” parts collection, colour options for the Apertas are in either black or silver.

SETTING UP
Provided one gets the base dimensions right, all that needs to be done is “lift loudspeaker, place Aperta on shelf/stand/floor so that it sits under loudspeaker, replace loudspeakers neatly on top of Apertas, play music”. Well, there is more to it than that. If inclined to, one may separate the two potions of an Aperta to implement a given degree of backward tilting to the loudspeakers. The Apertas come in two halves, top and bottom, joined by the clever working bits, ie four hollow tube-shaped isolators per side, where the two front ones may be length- (and thus, height-) adjusted to allow some tilt to be effected with each unit. Very useful, this!

I first tried to place a pair of old Mission 731s on the Apertas, but the bases of the Missions were too small to have each cabinet sit properly on all four “legs” of an Aperta. A pair of Mordaunt-Short MS10is fit ideally, so were employed in the tests. Once properly set on the four legs of each Aperta, the loudspeaker is pretty secure as the base (lightly) adheres to the Aperta’s top, there being a mild suction effect. The Apertas and MS10is sat on rigid four-pillar metal stands. There is still a little inherent “give” in the set-up, this by the tube dampeners doing their thing to drain cabinet vibrations and limiting the direction of play to the forward plane, but it was nowhere near the point of being springy. One did not get the impression that ultra loud EDM or the 1812 Overture cannons could cause the drivers to shove the cabinets till they disengaged off the Apertas. 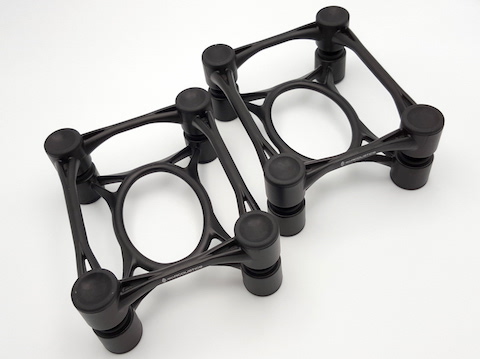 LISTENING
The effects when replaying tracks with the Apertas in place after having first heard them with the loudspeakers bare-bottomed were instantly noticeable. The descriptions the manufacturer claims would be experienced were indeed mostly borne out, so much so that I became concerned that writing this review would make it appear like I was parroting their ad copy.

Tracks gained more depth and separation, while bass notes became more distinct – even if initial impressions were a little weight and heft had been lost, one quickly adjusts and realises this actually is the result of it being more muddled previously. Separation and focus also improved. Even on relatively simple pop tracks like Leo Sayer’s One Man Band, one could more easily follow the strummed chords on the accompanying guitar, which appeared somewhat sharper, and when the wind instruments came in (I think I hear an accordion and fiddle too) brass and wood were more cleanly separated. What I really appreciated is that many a singer who appeared to be mumbling portions of his/her lyrics sounded more intelligible and more emotionally impactful. One just felt as if one’s brain was working less hard to let a song’s mood and feel sink in. Treble didn’t seem a whole lot different but because the bass and mids were cleaned up one tended to attribute improvements to have taken place here too.

The MS10is are quite lightweight speakers but I did not have any suitably sized with heavier cabinet units around. I perceived things did get slightly better when I added some weight atop the cabinet, making sure to place the weight centrally so as not to have either front or back being heavier than the other. Do experiment with this aspect too if getting yourself a pair to test. 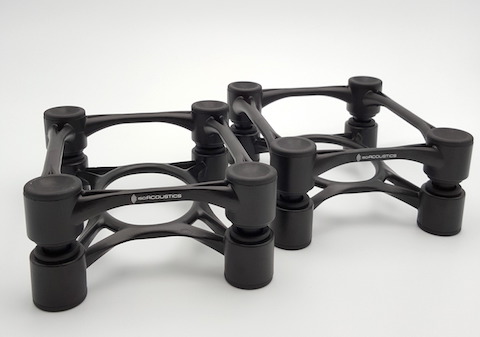 What of the potential performance-enhancing effects of the Apertas when the loudspeakers are on a cabinet or shelf in common with the rest of the gear? With the MS10is “nude” on an Ikea eight-column Kallax cabinet flanking a Linn Sondek LP player (on a Townshend Seismic Sink), I cued up UB40’s Wear You To The Ball and let its Linn K18-ii cartridge drop slowly into the groove. Got feedback? Yep, lots, though the pneumatic isolation platform and the famed spring suspension of the turntable did their bits in alleviating the detrimental effects of placing loudspeakers on the same surface and playing pop-reggae LOUDly.

But slot in the Apertas and what one thought was acceptable became, uh, a gargantuan lot more acceptable. It was surprising how much less vibration was percolating down into the Kallax with the Apertas being the interface between loudspeaker and supporting surface. Dyed-in-the-wool audiophiles would of course pooh pooh such a set up, but I wager that real world music lovers with taste for good gear and sound but unwilling to go the ‘speakers-several-feet-from-the-back-wall’ route would be willing to spend on the Apertas if they heard their effects. The trick then would be just how does one get them to go out and listen to a demo of these? 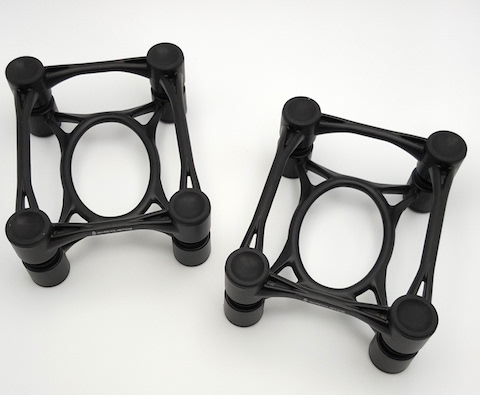 For me, the acid test was going back to listening with the loudspeakers bare-bottomed again after extracting the Apertas from the set up. It sounded like the soundstage collapsed back into itself and the bass began sounding like it had been on a fifty teaspoons of sugar per day diet. While the Aperta solution is not the only way one can isolate loudspeakers for some of the gains observed (I have heard the positive effects of the Stillpoints products for floorstanders, as well as some magnetic repulsion-/levitation- based solutions) at its typical street price, this is one of the more relatively affordable and easily installed solutions I am aware of.

THE LAST WORD
This is a product which one is happy to report “does what it says on the tin”, so to speak. Whether that would translate to unanimous favour is of course never a certainty. Our dear old editor let on that his impressions were somewhat less enthusiastic than my own, in a particular cursory test he conducted with his own gear, when we were casually discussing how late I would be in submitting the review text this time round.

But I, for one, firmly believe that most listeners will find the results to be positive and to their liking. Had some spare cash been available, and I was certain as to which of the loudspeakers in my stash, other than the MS10i, would be best served by an Aperta, I might have just gone and spoken with the dealers with a view toward having a pair become permanent items in my household. If I were to ever adopt an entire-system-on-a-single-console “lifestyle” approach, I’d consider the Apertas virtually mandatory.