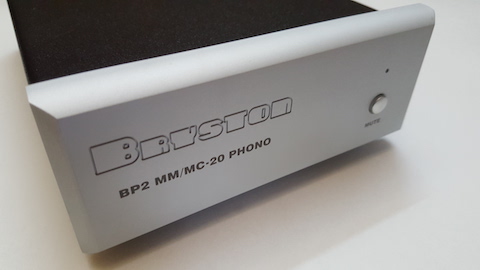 + Captivating tube-like sweetness and rhythmic musicality for fatigue-free listening; revealing; excellent grip on big-scale recordings, lining the sound stage with spatial detail and textured layering; holds itself well partnering modest and high-end front end equipment; ability to handle a wide range of cartridges across the price spectrum; the 20-year Bryston warranty.
– Tight squeeze to access the MM/MC flip switch; lusting for separate input terminals for MM and MC for two tonearms; a tad more air would allow the notes to breathe on the top end; absence of variable loading selector and mono switch to turn it into a serious proposition; separate PS3 power supply piles up the cost if you do not have a Bryston pre-amplifier.
Sound: 9/10
Value: 7/10

BRYSTON is one of the few companies where the technology used in its professional equipment proliferates into its consumer offerings. The BP-2 phonostage is part of Bryston’s new compact form footprint design direction. It is no wider than a shoe box if you line it alongside its (optional) PS3 power supply.

Brilliant choice by Bryston to fit the BP-2 with a pair of step-up transformers (SUTs) for the MC gain stage. You can configure your BP-2 at the point of purchase with either the 61dB SUT option or a much higher 72dB gain from the MM/MC-20 option that should be well suited for ultra-low output MC cartridges in the teens of milivolts. 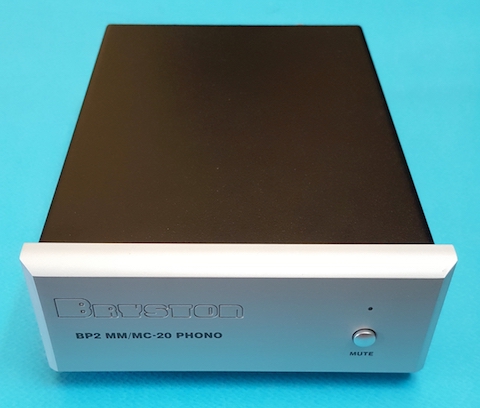 Setting it up is rather simple with the usual single-ended input terminals and output connectors at the rear panel. Bryston believes that the BP-2 will pair well with most MC cartridges and its option to specify between two SUTs for different internal coil impedance will pacify most audiophiles.

My only grouse is that the MM/MC flip switch is embedded in between the left channel input and output’s single-ended terminals and you would need slender fingers to flip it. Would have been better to have it positioned in the free space away from the terminals as I have nudged it whilst plugging in the interconnects. Flipping it a few times resolved the connectivity issue.

The multi-pin socket connects to either the PS-3 power supply, which you will need to buy separately, or a Bryston preamp to provide the juice.

LISTENING
Mining for Gold in Cowboy Junkie’s Trinity Session exemplifies the quietness of the BP-2’s SUTs. The magic of a single microphone recording inside a church encapsulates you with a sense of space as the natural reverb of Margo Timmins’ sweet voice draws the boundaries in the dead silence of the nave. The absence of amplification noise adds to the surreal sense of being there by focusing you on the singing and perhaps a hint of the distant background nuances beyond the church. In this instance, the low 0.23mV output of the ZYX Ultimate Omega was amplified 1122x (61dB) by the SUTs without noticeably raising the noise floor unlike conventional amplification designs. Peers are few and far in between at this price range for the degree of quietness achieved by the BP-2 with the use of SUTs for the MC gain stage. 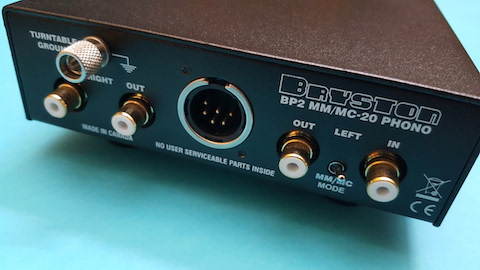 Scale is important to me. I decided to sweat the BP-2 with the Dance of the Nubians in Living Stereo’s LSC 2449 recording of the Royal Opera House Orchestra’s rendition of Faust’s Gounod. The orchestra goes into full swing with swift attacks, accompanying transient clarity and uncoloured timbre that allow you to pick apart the clarinets from the flutes in the woodwinds; there is a clear spatial sense to the orientation as you can easily tell that the brassy trombones are towards the left of the other string bass instruments on the right side of the seating arrangement.

The BP-2/Denon DL-103SA combination draws you into the music with a spatial sense of life-sized instruments where proportions are not overblown, and a violin remains a violin and not a viola. The quiet passages laced with only violins and flutes caress you whilst witnessing the gentle tingle of the bells from the distant left which I find tucked-in a tad on the highs. Nevertheless, it delivered the micro detail, acknowledging its nonchalant presence in the scale of the entire presentation. 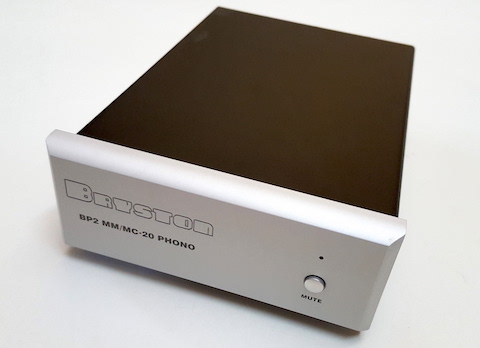 My desire for an airier top end led me to play Dance of the Sugar Plum Fairy from Tchaikovsky’s Nutcracker Suite in Classic Records Ernest Ansermat’s The Royal Ballet Gala Performances,where a celesta – a bell-sounding instrument that looks like a small piano with a pronounced timbre – is used. I crave for the defining timbre and air from the celesta that I found to be tighter with the BP-2 compared with my resident tube phono stages. This trait seemed to have moved on with Larry Carlton’s guitar in Alone/But Never Alone. The title track took my breath away. If you have a sweet tooth, you will be mesmerised by the sugary strings and sustained decay. You can literally see and feel Carlton plucking the strings and get goosebumps when you hear his pick swishing along the strings. The strings have rounded edges with tube-like sweetness that will not cut your ears. 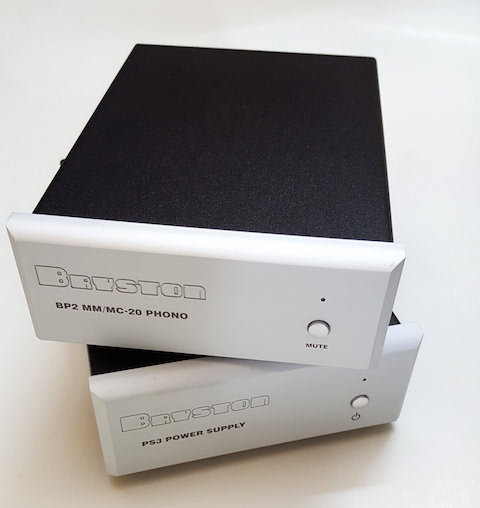 The Koetsu Rosewood Signature cartridge was next in line to play Amanda McBroom’s The Rose (from Dreaming) as I wanted to see how the BP-2 delivers changes in tempo and tonality as well as separating complex layers of voices and realness when it comes to the image proportions. The transition in pace and tonality is remarkable. If you are familiar with the song, McBroom is never hurried nor pushed, she is oblivious to her surroundings in the manner the pace gains. Her voice is palpable and effortless as she is positioned forward to the instruments while maintaining a life-sized image where it’s just her being there instead of a wall-sized mouth singing to you. She starts off with a higher pitch and goes lower and faster before the other instruments flows in. This is where the BP-2 excels, delivering layers of voices that are never muddied or flat; instead backing vocals remain as backing vocals without adulterating McBroom’s voice. I wasn’t aware that Jennifer Warnes was part of the backing vocals until I checked the notes as her voice is familiar to me.

The MM stage came alive with Chet Baker’s trumpet in his self-titled album Chet  where his instrument is smoothly rendered with a velvety saxophone-like texture. The BP-2 captures your soul as Baker varies his breath and inflection. Paul Chamber gently plucks double bass with a beat that is never overpowering alongside the mellow high-hat and drums. I have always loved this album not for Baker’s trumpet but more so for Chambers’ bass that’s well defined with that certain relaxing character that brings a smile to your face when you feel the weight and extension. I would not have been able to hear this despite having capable amplification and speakers if the BP-2 was incapable of delivering the subtleties etched on the grooves. It would have been a weighty thump otherwise instead of a textured experience. I played Metallica next with a big smile on my face but that is a story for another day.

THE LAST WORD
As a lifelong tube junkie, I confess that I like the BP-2 for its tube-like sweetness in the manner its renders vocals and strings. The tones are so well rounded that its smoothness results in many hours of fatigue-free listening. The MM stage is solidly designed with a neutral sound signature and the choice of using SUTs for the MC gain stage preserves the character throughout. The SUT is truly a wideband design that does not muddle up the soundstage but instead allows all the individual character of each instrument or vocals to flourish with spatial presence.

I would have loved to have an option to have a user selectable impedance curve to only not to precisely match individual MC cartridge coils but more so to allow fine tuning to maximise component synergy within a system. A mono switch would be a nice addition as there are an increasing number of mono enthusiasts in the market. It can be revealing and tight sounding with certain recordings leaving you craving for more air in the high notes but that would be my audiophile side of the brain showing.

It’s perfectly happy dancing alongside a Denon DL-103 as it is waltzing with a Koetsu whilst changing partners amongst the ZYXs, Grados and Miyajimas of the world without missing a single step. I am certain this is an investment that will be resident within your system as you upgrade your other components as it is fully capable of keeping itself afloat with the demands coming from a higher end equipment. As for me, it is my Shakespearean moment as parting is such sweet sorrow that I am actually reluctant to part with the BP-2 today.

See Meng is a banker turned sourdough enthusiast. He likes his music as natural “tasting” as his sourdough loafs. Other than classical or jazz, his taste of music never left the 80s.