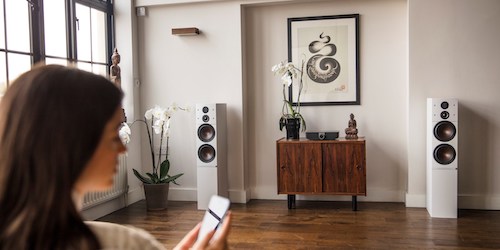 DALI may be a bit of a late entry into the high-end wireless loudspeaker stakes, but the Danish manufacturer certainly isn’t delivering just another “wannabe” product. Its new Callisto range, comprising the floorstanding 6 C and the standmount 2 C, features an interactive top baffle that can be used to control the speakers’ volume, or pause or mute music playback depending on the source in operation.

However, apart from the tiny row of lights indicating power-on status and volume, the Callisto is housed in a conventional rectangular cabinet that is wholly made in Denmark and is unmistakably a “Dali” – the deep red mid bass/bass drivers and hybrid dome-ribbon tweeter combo are instantly familiar, although the ribbon tweeter now has a circular housing against the rectangular one of the passive range.

One would think that targeting a new market segment would also entail a radical cosmetic re-do, but Dali’s international sales and marketing director Michael Pedersen indicates that it wasn’t necessary.

“Yes, we’re looking at a different market, but our target market also includes our traditional audiophile customer,” he admits, adding that the Callisto could also hopefully woo female customers for its wireless convenience and sonic performance. 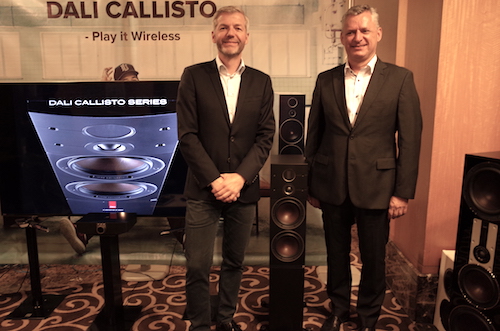 “But we didn’t want the Callisto to depart from the Dali looks, it’s still a Dali,” he added.

Pedersen was speaking at the launch of the Callisto in Kuala Lumpur (Dali set up its regional headquarters here last year), a day before the opening of the KL International Audio Visual (KLIAV) Show 2018.

“We have developed a number of innovative technologies for the Callisto,” he said.

While Dali already has wireless products in its lower range, the Callisto is being pitched as a full-fledged high-end speakers. A demo of various types of music by Dali product manager Lars F. bears out this – media were treated to a handful of tracks via the C 6, which touted to deliver 250 watts per channel via its class D bi-amps, and the floorstander delivered an outstanding performance.

Each speaker has wireless and cable connectivity. Used as a standalone, the Callisto can be hooked up to a preamp via the ADC input (RCA), when the speaker operates with a fixed gain and volume can be controlled via the playback device. 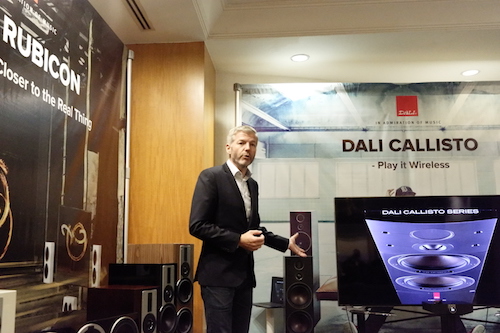 Lars explains the workings of the Callisto.

Once the Sound Hub is hooked up to the Callisto, the speaker can be also controlled via its top surface, and multiple wireless sources used, and this is when the Callisto can be integrated into multi-room set-ups.

You can read more about the Callisto here.

As for future expandability, Pedesen indicated that there was a possibility Dali would design a wireless subwoofer for the Callisto system.

The speakers have two finish options – black ash and white.

Hear the Callisto system in action at the KLIAV Show 2018, being held from today to Sunday (July 20-22) at the Sunway Putra Hotel in Kuala Lumpur.