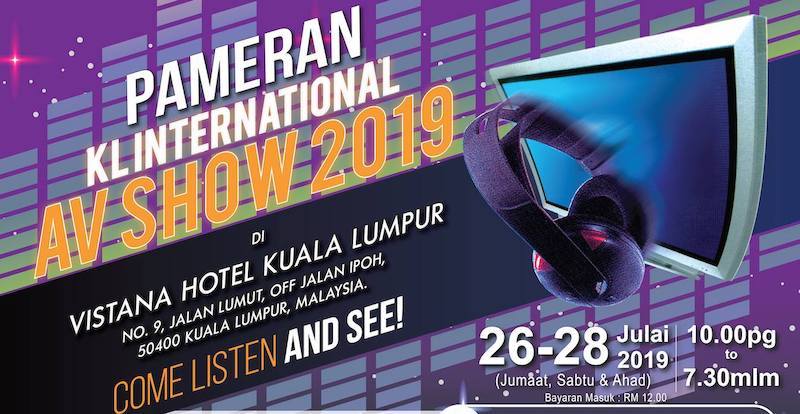 EVERY hi-fi and home theatre community isn’t complete without a signature event, and for Malaysian audiophiles and home theatre enthusiasts, it has been the KL International AV (KLIAV) Show, now in its 26th iteration.

Despite having shifted venues a number of times and operated under various banners, there has been one constant factor underlining the event – show organiser Dick Tan, an audio industry veteran who has worn different hats since the 1970s. For the industry, that is a comforting factor, knowing that the show will go on, no matter what.

Apart from a handful of people, however, few are aware of the painstaking process involved in organising such an event – from locking down the appropriate dates and venues to marketing it and finding the appropriate partners. Simply put, the logistical aspects can be a nightmare, but after a quarter of a century, things would run smoothly. This year, though, there was a little hiccup – finding and finalising a new venue after the cost for the previous place escalated.

We talk with Tan (above) on the various aspects of the show:

You’ve organised 25 hi-fi/AV shows, this year marks the 26th such event for you, under different banners and at various venues. How difficult is it to procure a venue for such an event – what are the elements you need to factor in, apart from cost, obviously?

“As you have said, cost of a venue is the single most important factor in determining if a show is viable. In fact, the question of cost very nearly put paid to our plans for the KL International AV Show 2019.

“One also has to factor in the suitability of the various type of rooms and the logistics. Example, are the rooms close enough to each other? Can the visitors go easily enough from, say, the large function room type exhibits to the exhibitors occupying the bedroom exhibits? Is the loading bay convenient to work with? All these factors can easily wreck the suitability of a hotel as our show venue.

“You may find this hard to believe, one hotel we were considering did not even have a loading bay, so to speak. Yet this particular hotel’s ballroom, function rooms and bedrooms were ideally located and easy for the exhibitors to commute between.”

It’s a fact that the entry/mid-level hi-fi market is stagnating, so how would such a show contribute to raising public interest in this segment of the market? What do you perceive to be the areas of growth in the next five to 10 years?

“One of the main aims of an AV Show is to keep the consumers aware of the various developments within the AV Industry and the various, interesting products that they bring on to the market every year.

“I know for a fact that the show is able to dissect product information at a pace far more efficiently that normal print and even the electronic media, though they do play their part. I remember the turntable, that was written off as obsolete some 30 years ago and then began to make its comeback some 15 years later. At that particular point of its comeback, many youngsters were curious as to how such a device works. Today, most young Malaysian know what a turntable is and many are curious enough to acquire one.

“The area that will grow at lightning speed is indisputably the digital arena, where the industry is stressing on the acceptance of digital media storage. Perhaps that is the way to go but personally I still prefer the physical medium. An example is the Bluray and 4K Bluray medium. I have yet to see a streamed movie that comes anywhere close in terms of performance, both audio and video.”

What sort of attendance have you had in the past three-to-five years… growing, stagnant or decreasing?

“The KLIAV Show, over the past decade, has recorded an average of around 10,000 visitors (paid and complimentary). It may not appear to be a lot but when you consider that visitors pay to visit the show, it says a lot about the quality of the visitors themselves. We know this, they are all interested in things AV.

“Of course, the economy can affect the turnout numbers but very often, we have been proven wrong. When every factor is there to tell you to expect a smaller turnout, the crowd, as if to spite your expectations, does the complete opposite!”

How relevant is such a show, given the changing trends, globally, regionally and locally?

“As long as we have a pair of ears and eyes and the world generally embraces music and of course of late, movies, there will always be an industry that caters to technologies and products that bring these forms of entertainment to us.

In my opinion, the AV Industry will never die or fade. It may change form and the way that audio and video content is delivered to us, but it will never die… well, at least not in our generation.”

Finally, when you finally decide to call it a day, have any continuity plans been made to ensure that the show goes on?

“There have been several attempts to acquire the show. Most of them falter when they discover how committed one has to be to get such a show going. No, there’s no successor.”