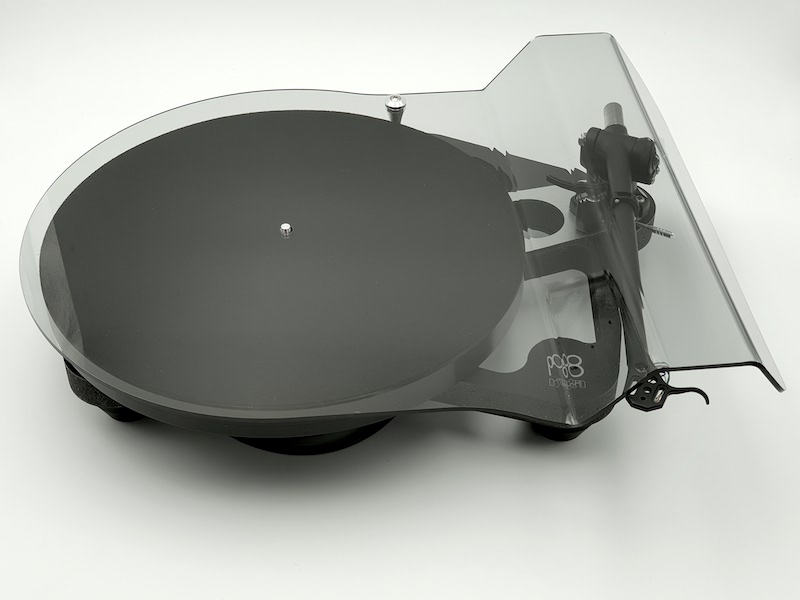 + Rega’s “go speed racer, go” approach finds a new level of expression at the price; highly infectious music-making ability will readily seal the deal for many; Apheta 2 on its own also worth investigating if you’re not in the market for a complete player.
– Not the lushest of presentations, if that’s what you’re after; Apheta 2 may just be better than the turntable’s performance ceiling; plasticky feel to the Neo power supply’s casework.
Sound: 9/10
Value: 9/10

I’VE unboxed many a Rega turntable model in my time, but just eyeballing the carton of the latest Rega Planar 8 (the “8”, henceforth) indicated this one would be different. None of the preceding models had come in a carton of such (smaller) dimensions.

Working through the layers of protective foam till one reaches the plinth of the 8 (more like “skeletal frame chassis”, actually), the platter-less 8 can be lifted out with a single hand. It is made with Tancast 8 polyurethane foam, which is sandwiched between two layers of thin HPL (high pressure laminate) skins for maximum rigidity; Rega has taken the implementation of its low mass and high-rigidity design principles for its plinths to a whole new, er, low.

Grabbing it by its main beam when extracting it from its packaging, one quickly discovers that this thing is really lightweight indeed (the dangling tonearm and motor wiring caused it to feel substantially heavier), weighing some 30% less than its predecessor, according to Rega.

If the thought of paying more for less is anathema to you, you’d be pleased to know that when it comes to the platter, you do indeed get more for your more. In terms of layers, at least. It comes in three layers of bonded glass, one up from what the firm had produced to date. When it comes to mass, Rega applies it in a targeted, precise way, at the edges of the platter. Once assembled, this must be the most diminutive turntable in terms of size (and weight) at its price point.

While I never had the chance to listen to the previous RP8 and RP10 models in any measure to claim familiarity with them, I rather liked their looks when freed from their surround frames. I am thus left wondering why the 8’s frame was reshaped, to me, in a less attractive way. Arguably rather dumpier and less artistic, yet, admittedly, it is somehow still appealing. It must have something to do with optimising weight distribution, I guess.

SETTING UP
After removing the protective cardboard spacer from beneath the sub-platter, all that was required was to place the glass main platter gently onto the sub-platter, plug in the motor’s power cable to the Neo power supply box, and then connect the latter to the mains via a plug top unit.

Mounting the Apheta 2 cartridge was easy enough with Rega’s three-point mounting scheme, but removing the cartridge from its packaging proved harrowing as, unlike its cheaper offerings, Rega didn’t include an Allen key for the Apheta 2’s mounting hardware. Plus, the distributor didn’t include the stylus guard with it when sending it in for review! One does such things at one’s own peril when one is cognisant of the cost of the cartridge, which handily exceeds one’s notional annual discretionary spending amount (in my case, at least).

A dust cover is included in the package, but there’s been no other like it before in the Rega line-up. The picture of it spares me (and you) a thousand words. What I can say is I rather grew to like it after getting used to placing it on the 8, but the reality is the cartridge’s working bits are still exposed to potential mishap, even with the cover in use, especially from a lower frontal assault which most cleaning persons armed with feather dusters may be prone to initiate, however well-meaning they may be in just carrying out their tasks.

The feet on the 8 also look different from what’s come before, possibly to bring improved isolation from the surface the 8 sits on, but a Rega turntable is a Rega turntable, so care with placement to minimise acoustic feedback is still the order of the day. I used it almost exclusively atop an ancient Townshend CD Sink for most of the review period.

The Neo power supply’s casework is not the most solidly-constructed I’ve come across, falling more into the “adequate build for the price” category. One could see the red light from above via a gap in the chassis at the part where the plasticky faceplate joins to the main body. Also disconcerting was how hot the supplied wall wart power supply ran, even a short time after switch-on. None of these are failings per se, but the user would do well to be aware of them.

The RB880 arm handled very well indeed, and I could nary tell if there was any difference in the bearing assembly quality when comparing it “by feel” with the resident Rega RB1000 arm which I have been using for a good many years now, and which cost quite a percentage of the whole 8 when the older arm was still available. I rather liked the RCA connectors on the RB880, being easy to grip and less cumbersome to handle than the RB1000’s Neutrik plugs.

Being a Rega, don’t expect a separate earth lead for the tonearm cabling. Downforce is set using a spring mechanism, with magnetism being the chosen route for the application of anti-skating, as seen in previous generations of the RB series arms. You don’t change what ain’t broke.

Those moving up from lower Rega models may be glad to hear that the Neo, apart from allowing push-button speed change (33.3 and 45 rpm speeds only), permits a small amount of speed adjustment. The review unit ran spot on upon arrival without need for adjustment, based on the usual strobe disc I use.

LISTENING
The first thing you notice with the 8 when the needle hits the record is that there’s not a lot to notice when the needle hits the record. On a well pressed piece of vinyl, there is almost silence before the first track starts, something in common with all good record player combinations. Playing Haircut 100’s Boy Meets Girl, the whole system bursts into life with authority, wonderful dynamics and a sense of separation to the various instruments the band used, with an infectious sense of rhythm that sitting still is not an option, no matter how many times I had heard this track before.

Percussion instruments are obviously what drives many an upbeat track, and this is where the 8 excelled, the character of drum kits and various hand drums and shakers all convincingly conveyed. While the in-house idler-driven players may have had the upper hand in ultimate weight and extension, the 8 was never lacking, and countered by demonstrating a slightly more precise and clearer sense of drive than some of these elderly units, which are no slouches themselves.

It isn’t just all fireworks, as several girl or boy with an acoustic guitar tracks which followed almost had me convinced they were in the room, such was the tangibility and fine detail in their voices and instruments that came through. I sat there mesmerised not just at the reproduction quality, but the emotional engagement of the performance. It made me want to pull out a guitar and work my butt off to get myself to a percentage of what a Richard Thompson or Bob Dylan could do.

Playing the likes of Randy Newman accompanying himself solo on piano in his Songbook box set, and the superb Vincent Berlanger 45rpm Pure Cello album, these acoustic instruments are manifestly more difficult to get right than a solo guitar but the 8 and Apheta 2 really did a first class job in the context of the test systems they were used in.

Orchestral crescendos and swing big bands had scale, width and separation which, to me, really made me take notice of the Apheta 2’s strengths. While I did not have time to try other cartridges in the 8, I did have a short session with the Apheta 2 in my TD124-RB1000 combination which, while different from the 8’s overall presentation, being somewhat less detailed and less quiet in terms of background noise, fitted my preferences and system more, with yet a firmer bottom end to the music and sweeter mids and top end. And the Apheta 2 brought out a stage width that really impressed, the alto sax in Al Stewart’s Year of the Cat appearing wider from centre than with the other cartridges I had used.

It was obvious to me that as the listening sessions wore on, the 8 with Apheta 2 in tow was a step or two ahead of the Regas I had hosted before. The ability to keep the beat is present and well, and probably superior to its predecessors. Of all the turntable combinations I have in my collection, the 8 seemed to pull closest in the same direction as the Roksan Xerxes, sounding similar overall in presentation.

While I didn’t feel there was anything to severely criticise with the 8’s performance, no (affordable) turntable I know of yet has been all things to all men. The 8, as with the Xerxes and some other more detail and warts-and-all oriented designs won’t be the best thing for you if you’d rather have a more velvety or laid back (relatively) performance. Several screechier solo violin LPs just sounded less aggressive on an LP12, and if voices could be compared for sexiness over vinyl replay, I would prefer the TD124 with Apheta 2 for playing Shelby Lynne’s Just a Little Lovin.

THE LAST WORD
Rega has every reason to be proud of the new Planar 8. A quality record player really makes you forget checking your subscribed YouTube channels and social media messages once the stylus is in the groove (okay, maybe not for all of us!), and the 8’s simple form, easy set up and infectious performance mean that even though it is far from cheap, it is arguably fine value for money for what it brings in terms of musical enjoyment.

I really enjoyed my time with it, and I believe you will, too, if you are looking for a record player in this price class.