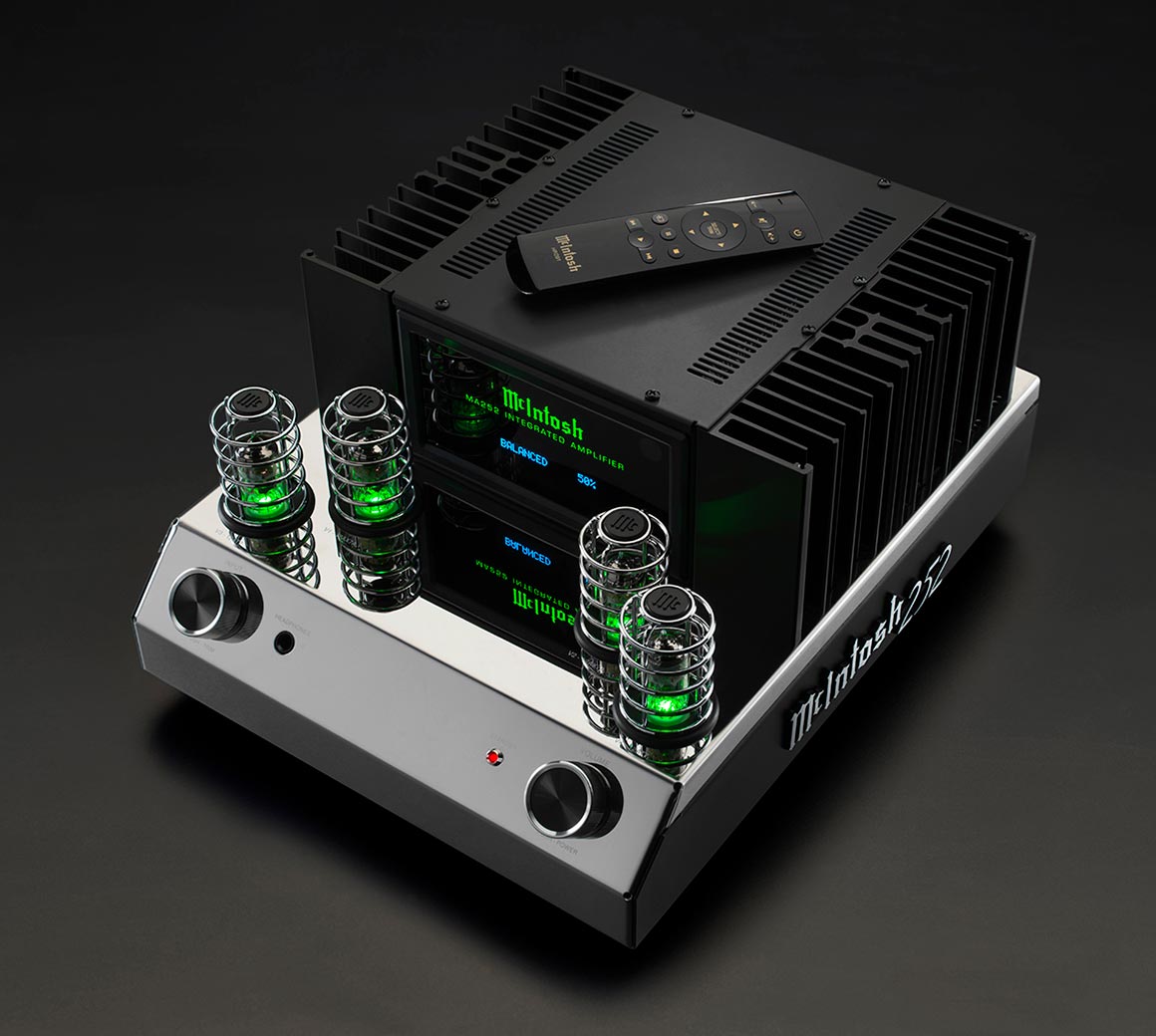 + Polished performance from a stylish looker of an amp; well-judged feature set; fine MM phono stage; it’s a Mac! … and at a relatively affordable price.
– If not sited atop an open rack for all-round view, its side engravings would be a wasted luxury; dust and finger prints become only too obvious on its shiny reflective chassis
Sound: 8.5/10
Value: 8/10

IT seems surprising, when one thinks of it, that a long-running company like McIntosh, with so many years of expertise built up in both tube and solid-state amplification technologies, had never marketed a unit which employed both in a hybrid design. Until recently, that is. But then again, some would point out, neither has Quad, the similarly long-running company from the UK which the US-based McIntosh has been oft likened to.

Whatever the reason why it took McIntosh so long, the company has now done so, and it has certainly attracted interest. When I saw the McIntosh MA252 integrated amplifier for the first time at the 2018 KL International AV Show, I was smitten. With an industrial design which draws visual cues from its classic MC240/275 power amp forebears, and at a more affordable price and compact form factor which would make ownership an easier choice for the non-hardcore autoformer-loving audiophile, it is no wonder the amp has enjoyed reportedly successful sales numbers to date.

This first hybrid integrated amplifier from McIntosh consists of a preamplifier stage which uses two 12AX7 and two 12AT7 vacuum tubes coupled to a solid state power amplifier stage that delivers 100 watts per channel into eight-ohm loudspeakers or 160W into four-ohm ones.

While it does (deliberately) resemble McIntosh’s earlier designs, with classic profile shiny-polished metal for the lower hull and its ‘M logo’-monogrammed lovely heatsinks in the sides of the black-finished upper power section, it comes chock full of McIntosh’s more modern trademark-named technology. “Power Guard” prevents speaker clipping and “Sentry Monitor” activates to prevent damage in case of accidental shorts happening with the speaker cables. One would have one’s work cut out for one in attempting to damage the amp via careless misuse.

The four preamp tubes are lit up from their bases by bright green LEDs during operation, changing from orange (the initial turn-on colour) once warmed up. Embedded into the upper section’s bulkhead is a useful, adequately visible blue OLED display which sports the words “Tube Warmup” while the amplifier is doing so, and then indicates one’s chosen source (as last used before turn off) and volume level (trotting up from nought to last volume level before turn-off).

SETTING UP
For those who have not handled tubes before, fear not, as they are all inserted at the factory and ready to go upon unboxing – you just have to place in the tube cages when setting the unit up. There may be no hot-running power tubes in the MA252 but there are still tubes, hence, the owner’s manual suggests providing at least 15.3cm top space over the unit for adequate ventilation. In practice, even in some of my louder listening sessions, the amp didn’t run as warm as some of the all-solid state units I have used. One could thus probably get away with placing it on any tier of an open-plan audio rack which will fit it, but I reckon most would want to place it on the top shelf to get the most out of its visual appeal. The unit’s dimensions are a fairly compact 30.5 x 19.4 x 45.7 cm (/h/w/d) with a weight of 12.7kg.

The biggest dilemma I had in siting the unit was whether to place it front-facing (with knobs accessible to the user, for obvious necessity in operating the unit), or side-profiled, where the not uncostly engraved McIntosh logo at its side(s) one had paid for could be displayed in full glory. One could do this with an old MC240 power amp, to have its row of tubes face front, since its working bits need not be handled constantly, but that’s not the case here. And the slope-faced metal lower fascia, shiny as it is, with its knobs and tube placement may soon start to remind one of its semblance to a gas burner stove! (okay, so audiophiles don’t normally spend time in their kitchens, so what am I whining about, right?)

There are four inputs for sources, all analogue – three line-level ones via a pair of balanced XLR inputs and two unbalanced pairs of RCA jacks, and lastly, there’s a MM phono stage. Each of these inputs can be given user-customised names.

For the transducer outputs, two sets of solid loudspeaker binding posts are provided, as well as a single mono RCA jack for connection to a subwoofer from the preamp section. A headphone amplifier output also features, but like me, you’ll have to leave that dinousaur-age open-reel or cassette recorder in your closet as you ain’t tapin’ nuthin’ from this amp.

The unit is turned on by pressing on the volume knob, while the left knob controls input selection. On pushing the latter, bass, treble, tone bypass, balance and input offset levels (which enables keeping volume levels consistent for each of the inputs) can be adjusted. This may also be done via the included remote control unit but as I tend to get up these days to walk to the system, the remote didn’t see much use during the review period.

I’ve already described what happens on switch-on, but in addition thereto, the Mac also remembers one’s balance and tone control adjustment settings for each separate input. Clever use of its onboard microprocessors, no?

According to the manual, there is a “power off” mode which kicks in if the unit sits unused for about 30 minutes – highly useful for preserving tube life if one were to regularly fall asleep in front of one’s system. This was disabled on the review unit but I never felt the need to activate it as it wasn’t easy falling asleep with music pumping through the Mac. More on this below.

LISTENING
A substantial part of the initial listening was conducted through the Mac’s MM phono stage, both with and MC cartridge loaded through a step-up transformer and with an MM cartridge. Once the tubes and silicon stretched their sea legs, the performance of the Mac was satisfying indeed. Even before evaluating its sonic characteristics, the thing that struck me was the unit’s ability to boogie, to convey the liveliness and sense of rhythmic acuity which I hadn’t always heard from bigger autoformer-ed Macs.

I liken the MA252’s sound to a properly grilled New York strip steak – it had a good, tasty blend of juicy tenderness (with apologies to audioFi‘s vegan Editor and other vegetarian or non-beef eating readers out there). Here was a presentation which was well-balanced with a judicious degree of warmth thrown in without at any time sounding turgid, rolling along smoothly yet with good gobs of detail emerging.

Its top end was silky, perhaps not the airiest in its class, but clearly more extended and defined to show up the relatively blunted top end of a Naim 122X-fronted pre-power combination used for comparison. It had an authenticity in its midband which conveyed human voices convincingly, the combination of distinctive tones of Trisha Yearwood and Don Henley on Walkaway Joe really holding onto one’s attention.

The MA252’s bottom end was strong and firm, drums sounding taut and powerful on well-recorded tracks thereof like the intro to Robert Palmer’s Addicted to Love, with pizzicato notes on upright bass in jazz numbers keeping fine definition on sustained runs. I’d rate the Mac here as good, though not exemplary. In the bigger scheme of things, the bass didn’t elicit any sense of deficiency for me, at least as far as the test loudspeakers and subwoofer goes (which were none too challenging admittedly, being comfortable for this class of amplifier wattage playing loudly in an average sized room without strain). It is unlikely to disappoint, save perhaps for hardcore bass hounds with hungry loudspeakers.

In a straight comparison of the MA252’s internal phono stage with the standalone Parasound JC-3, the internal unit was understandably less capable, but I wouldn’t make too much of it. It still sounded highly enjoyable and gave every indication of being able to accommodate a better cartridge than the Linn K18-ii in use. Its performance when used with an SUT-coupled low output MC was detailed and satisfying. As for the headphone output, I also had little to complain about – it handled a Sennheiser HD650 well enough, with good space and depth perceived, so should be adequate for most users.

All in all, it goes a long way toward offering good sound and good value to the purchaser, even if it is by no means cheap for the average wage-earner in this area of the planet.

THE LAST WORD
For the punter looking for an integrated amplifier with retro looks, and doesn’t mind (or positively insists) that thermionic valves feature in it, at least in its preamp section, this is a good choice for the money. A classic brand with good build, famed for its longevity of service life and holding fair resale values, strong performance and visual appeal… what’s there not to like? Recommended!