Cyrus ONE Cast amp – one for the money 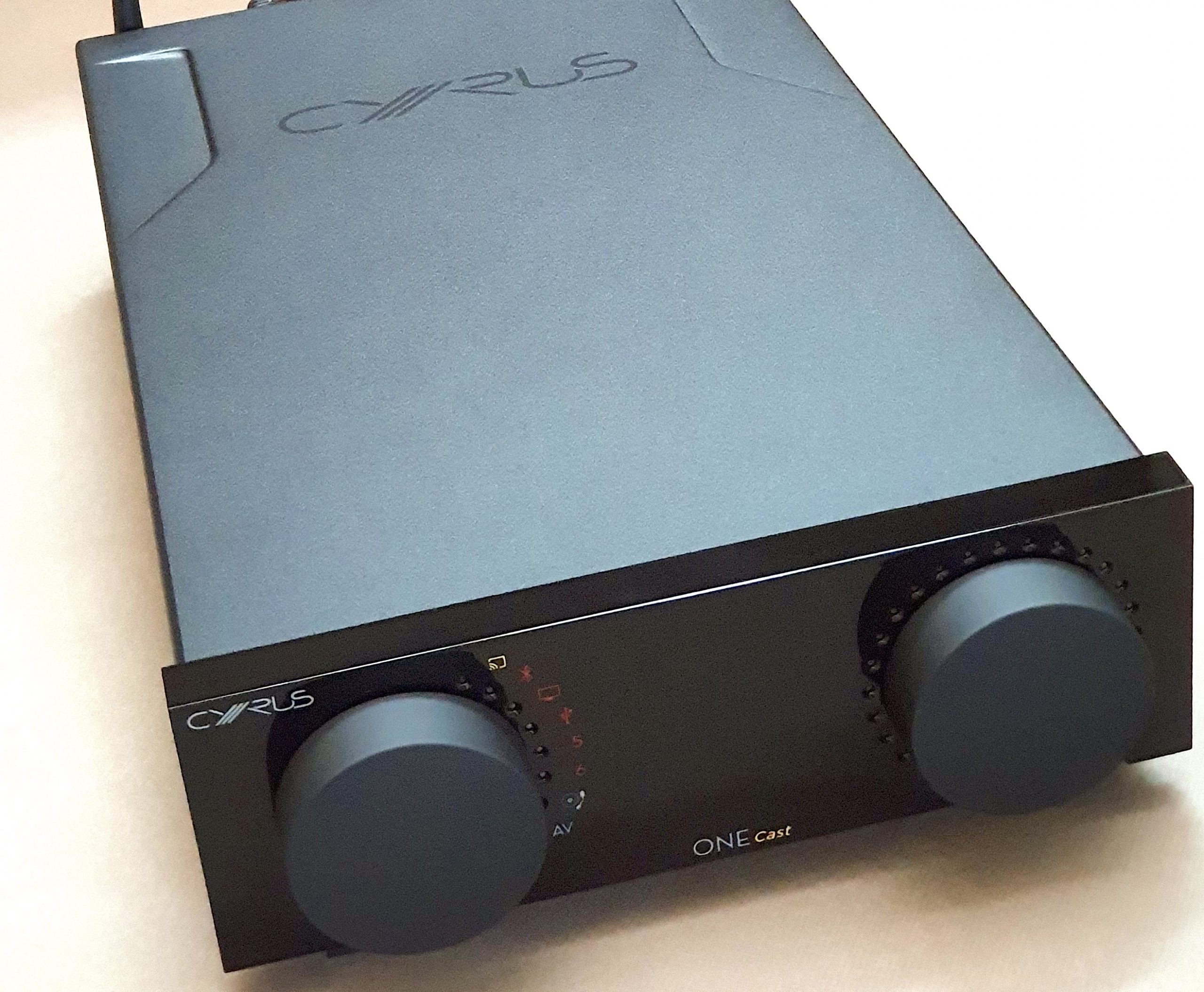 A YEAR ago, I had the fortune of reviewing the stablemate to this amp, the ONE HD. Bringing the amp up to date with streaming capabilities, Cyrus has brought forth a streaming capable version of its line of ONE amps. Built into the same half width (but fairly deep case) as the ONE HD, this amp promises to bring streaming hi-fi in a simple package to the midrange hi-fi hobbyist. For this review, I replicated some of the tests I did with the ONE HD, to confirm the abilities of the new model.

Key changes from the HD are the omission of APT-X from the Bluetooth input, as well as the omission of the second set of speaker terminals and two line level inputs. The back panel now sports a HDMI input (for HDMI-ARC) and two antennae for Wi-Fi and Bluetooth. Remaining are USB-B input, optical and coaxial digital inputs, along with MM phono input as well as a set of line level inputs set up for AV duties. Up front, there is a quarter-inch TRS headphone jack driven by a class A/B amp.

Inside, the amp sports an ESS 9018 for DAC duties, fed by the digital inputs as well as the Wi-Fi and Bluetooth streaming inputs. In terms of streams, the Cast principally is a Chromecast audio device as well as an Airplay 2 device, covering both Android and iOS users. For Roon, the amp can be used via the Chromecast option, though the stream tops out at 48kHz, 24 bits. Via the USB-B asynchronous input, the amp is capable of 192kHz, 24-bit PCM data and Single DSD (2.8 MHz).

Amplification duties are handled by the same class D amps as with previous Cyrus ONEs, rated for 100W per channel into six-ohm loads. Powered on, the amp senses the load presented by your speakers to optimise its output.

The case is true to Cyrus design being a well-built and dense half-width case with a source selector knob on the left, and the volume on the right (a digital encoder with LEDs to show your volume setting). The power switch is a push button under the source selector. No tone controls as such on this amplifier given its fairly “purist” approach. Of note are the lightness of the knobs which don’t feel terribly solid and the LEDs, which are rather bright on their default setting (but can be adjusted with the IR remote). The supplied remote is a simple wand with basic functions and play/pause and source switching.

Setup is done via the Google Home app either on iOS or Android, which is the best way to do so, setting up the Wi-Fi and thus enabling all your streaming services – Airplay2 and Chromecast.

TESTING
I tested the ONE Cast with a variety of sources – Roon server via Chromecast, and also using my Roon Core to drive the USB input, Bluetooth from an iPhone 11 Pro Max. Vinyl testing was done courtesy of my Denon DP80, Micro Seiki MA505X arm, with an Audio Technica VM 540ML MM cart, EAR 834P phono stage as well as the onboard phono.

On the outputs, I tested the amp with a pair of Q Acoustics Concept 500s as well as two pairs of LS 3/5as driven in parallel in a double formation (per Ken Kessler’s suggestion in HiFi News and Record Review), but most of the testing was with Cyrus ONE Linear bookshelf speakers – there will be a separate review of those speakers.

I also tested the headphone output with a pair of HiFiMAN HE4XX planar magnetic headphones.

LISTENING
With the Cyrus ONE Linear Speakers
It comes as no surprise that the ONE Cast sounds a lot like the ONE HD – the amplification section is the same after all. As with the previous model, I started with vinyl, this time with a lovely 45rpm Analogue Productions reissue of Herbie Hancock’s Maiden Voyage. With the Audio Technica VM 540ML MM cart, the vinyl input of the ONE Cast shows itself to be a bona fide phono input, not merely a feature to tick the box. A superbly wide soundstage was apparent, with cymbal textures rendered delicately and Hancock’s piano all present and correct. I then switched to a more modern recording – the recent Tone Poet release of Cassandra Wilson’s Glamoured. There was good presence of her voice in the wide soundstage. and complex polyrhythms were well rendered.

As previously, I compared the onboard phono stage with my resident EAR 834P. Again, the 834P is warmer, with a more liquid midrange and a greater ease with rhythms, but this takes nothing away from the on board stage which will suit budget to mid-high MM vinyl playback systems. Of note: the protection circuitry of the amp is conservative, so if your stylus is jostled from a hard landing on the LP, the amp may cut out to protect the output stages and your speakers. You will need to unplug the amp and allow it to reset to continue.

I then tested the ONE Cast briefly with the USB input driven from Roon directly from my Roon Core running ROCK on an Intel NUC. I ran through my standard playlist of test tracks. Of particular note were the wide soundstage painted by the amp – most apparent on John Lewis’ Evolution (Tidal FLAC 44/16 stream). This recording is probably my most favourite recording of a piano – and the width portrayed was truly stunning even though the ONE Linear Bookshelves. Not only that, the amp did a very convincing rendition of the solo piano – something which a lot of hi-fi gear struggles with.

Next up was Milt Jackson and John Coltrane on Bags and Trane (Quad DSD DSF File) – my go-to for instrumental timbres. Again, well rendered, with an easy flow to their rhythm, if not quite as driving or precise as the Naim Uniti Atom. Trane’s horn is particularly soulful, with the small inflections of his playing naturally portrayed in the flow of the music.

I now switched my attention to the streaming input, which is the raison d’etre for this amplifier. Principally using Roon to drive it as a Chromecast device, I ran through some of the same tracks – which were duly re-rendered on the fly by Roon to a compatible 44 or 48kHz, 24-bit stream if the source file was “high res”.

There was a slight reduction in clarity and “air” but nothing which would be very obvious unless you were doing a direct A/B comparison. There was also a slight reduction in dynamics, but again this was very subtle. The soundstage stayed admirably broad throughout – the implementation of the ESS9018 is solid. Airplay2 playback was similar, though it only tops out at 48KHz/16-bit whilst Chromecast can accommodate 24-bit, but for most applications, that is moot.

One good feature – when using Chromecast or Airplay2, the amp automatically switches to the streaming input when it senses a request from an app to do so. Volume can also be adjusted from the App in control as well – very convenient. The supplied IR remote can also relay play/pause/skip commands back to the app playing your music.

I switched then to Spotify Premium, which picks up Chromecast devices as a matter of course – and that integration was similarly seamless. The ONE Cast handles the 320kpbs Ogg Vorbis streams from Spotify well, not sugar coating them, but presenting them in a pleasant and enjoyable manner. I played back some of my rock and pop favourites, and even 80s produced Britpop was rendered in an enjoyable way – this genre can often sound thin and glarey through high end systems. Of particular note, an early CD pressing of Peter Gabriel’s So sounded dynamic, with only a hint of midrange brightness.

Finally, I played some of the same files from my iPhone 11 Pro Max via Bluetooth to the ONE Cast, which only sports the default SBC codec. It was serviceable, and usable in a party situation, though it is evident that this is not meant as the principal way to stream music to this amp.

Not surprisingly, the ONE Cast is very well matched to the ONE Linear – as it should be, but the ONE Linear is a very good set of speakers in their own right – stay tuned here for a full review of those speakers.

With the Q Acoustics Concept 500s
Right off the bat, and like its stablemate, the ONE Cast was able to drive these floorstanders without any audible distress. The ample low end of the Concept 500s complemented the slightly lean nature of the ONE Cast, allowing for a full-bodied yet nimble sound – indicating that the output stages have good control and damping of larger speakers. The crystalline midrange was also apparent in full force, allowing for a very precise soundstage and good vocal projection, especially on tracks such as Macy Gray’s Stripped (24/96 FLAC from HDtracks) and good rendering of the ambient cues from that binaural recording.

With the dual LS 3/5a set-up (Falcon Acoustics and Harbeth)
As an experiment, I also tried driving my resident double LS3/5a speaker set-up (the top speaker is mounted upside down, so the tweeters are in the centre of the stack, both speakers are driven in parallel). The auto impedance sensing from the Class D output stage took the doubled speaker set-up in stride and drove the combination with great aplomb. On John Coltrane’s A Love Supreme (24/96 FLAC from HDtracks), a great sense of scale and height was projected out of the stack, making for a soundstage with great dimensionality.

With the HiFIMAN HE 4XX Headphones
The headphone output is not an afterthought. Inserting a quarter-inch TRS headphone plug mutes the power amp section, bringing the Class A/B headphone amp into play. The headphone output had plenty of power and headroom to drive the HE4XX, which are not easy to drive given that they are planar magnetics. There is a similarity to the profile heard from speakers, but it is hard to compare directly given the nature of the transducers. However, it was thoroughly enjoyable with good detail retrieval, drive and an even-handed tonal balance from top to bottom.

THE LAST WORD
The ONE Cast is a very capable streaming amplifier. Its minimalist aesthetic will be appealing to some who eschew complex set-ups. The capable amplification section has been complimented with a well thought out streaming module. The phono input remains very capable – one for vinyl enthusiasts with MM carts.

The Cyrus ONE Cast competes now with some very capable competitors, including the very desirable Naim Uniti Atom, which also performs similar functions, but has on hand additional features which might be important to you.

Yes, there is better, but for RM7,199, you will be hard pressed to assemble an equivalent system which will sound as good. Recommended, but do audition well before buying!