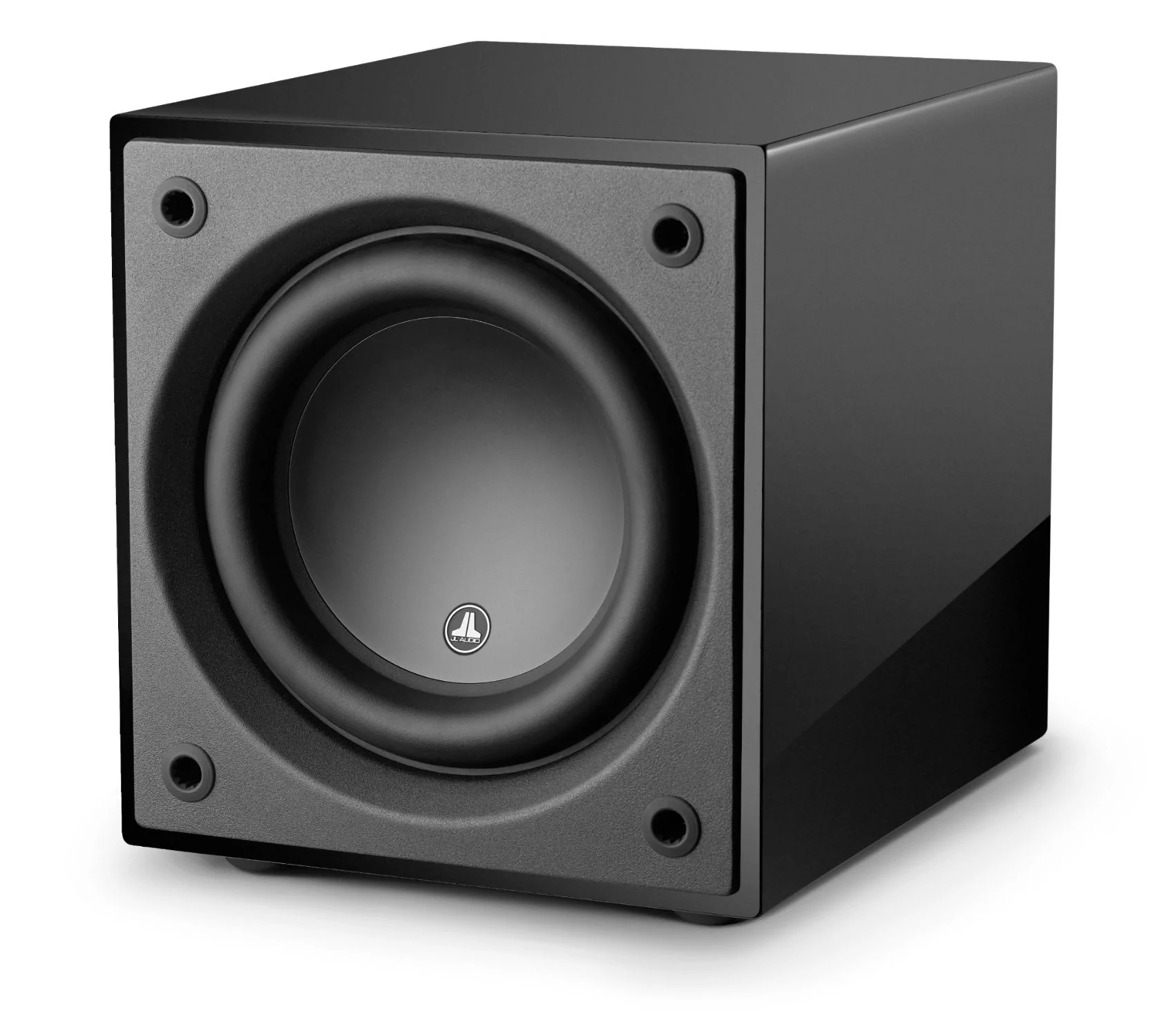 I MUST admit that I was entirely unfamiliar with the JL Audio brand at the outset of this review, but a little poking around the Internet and reading other reviews and prowling around their website has familiarised me with their reputation in car, home, marine and active sports speakers. But of note here is their considerable range of home subwoofers in various form factors for those looking to build their ultimate home cinema set-up.

JL Audio’s second smallest home subwoofer, the Dominion d110, comes with the DNA of its bigger siblings. The unit itself is an unassuming cubic shape, with a 10-inch driver gracing the front of the sealed box bedding a fabric grille, with a control panel and heat sink on the rear.

The d110 has both single-ended line-level inputs (L&R) on RCA jacks as well as high level (speaker) inputs. I was unable to test the high level inputs as the distributor did not provide a cable or connector to wire to my amplifier.

The controls have the usual level and crossover frequency controls, but also have phase and 180 degree polarity invert switches, as well as a Low Pass (LP) filter to switch in or out the Linkwitz-Riley LP filter. There is also a ground lift connector and a proprietary wireless link connector on a RJ-45 socket. Mains is input through a standard IEC mains connector.

TESTING
My focus for listening was as a music subwoofer and as such I tested it with my Naim Uniti Atom streaming amplifier which sports line-level preamp outputs which I used to drive the subwoofer over a pair of standard RCA interconnects. The majority of my listening was via Roon to the amp as a Roon endpoint.

I matched the d110 up to a pair of KEF LS50s, which as very fine bookshelf speakers can benefit from additional bass reinforcement from a good music subwoofer. The LS50s played in full range, with the subwoofer providing reinforcement below 50Hz.

I also plumbed the subwoofer into my AV set-up to see how it fared in that setting. And as a reference, I also compared the d110 to my own REL T5 subwoofer in the same settings.

LISTENING
I kicked off with Massive Attack’s Teardrop (CD rip to FLAC file), which is a go-to for me to test subwoofers, dialling in the right settings by ear, with the d110 placed in the middle of the two speakers which were sited about three metres apart.The thunderous bass line of Teardrop thudded out with great authority, with Liz Fraser’s ethereal vocals punching up above the bass line. I had to back off the level quite a bit as it was clear the subwoofer was capable of going very loud indeed.

In the theme of Teardrop, I switched to a lovely cover of that tune by Avishai Cohen on his newly released album Big Vicious (ECM). Fraser’s vocals on this cover are replaced by Cohen’s melodic trumpet work. Although the bass was not as “big”, the d110 made its presence felt, underpinning the drums and bass with a solidity which wasn’t there when I switched it off. In addition, the d110 did the trick of making the scale and dimensionality of the sound expand, making for an even more “out of the box” presentation from the LS50s.

Next was some classic rock in the form of Dreams by Fleetwood Mac on the classic album Rumours (24/96 FLAC file from HD Tracks), with Stevie Nicks’ floating vocals over the ping-pong bass and drums across the stereo soundfield. Again, the d110 made for a bigger and bolder presentation, without taking away from the midrange.

Finally onto some down tempo electronica from Zero 7’s As it Falls (CD rip to FLAC file). The opening track, Warm Sound, was rendered with great warmth as the title suggests, with the extra bass helping to convey this warmth. Without the subwoofer, the track was not as warm and enveloping, with the soundfield surrounding you.

For final testing, I connected the d110 to my AV system and played a number of action movies (e.g. Ghost in the Shell, Pacific Rim, Top Gun) and the d110 was more than capable of taking on the Dolby and DTS multi-channel LFE sound effects in its stride.

Compared to REL T5
I hooked up my own REL T5 to benchmark the d110. REL is a very well known brand in the hi-fi world with respect to its prowess in music subwoofers and as such performs superbly in this regard, with superior speed and agility as well as better rendered bass textures. But the d110 made a “bigger” sound, expanding the scale even more than the REL, making for an even more solid sound.

In an AV setting, the d110 bests the T5 handily, going louder, with more heft and drive in the low frequency effects.

CONCLUSION
The Dominion d110 is a very competent subwoofer, which is easy to match to almost any speaker system, providing a very noticeable lift in low-end grunt, and an increase in scale and dimensionality with any pair of good bookshelf speakers. The amplification is well specified and drives the long-throw driver to great effect. This is felt most in AV applications, though it also has a great effect in music applications.

My only slight reservation is that its bass quality is bettered slightly by the likes of the REL T series, but this is comparing it against a highly regarded music subwoofer brand. Thus, I think the d110 represents good value – it’s a lot of musical subwoofer for the price.

Thus I can recommend the JL Audio Dominion d110 subwoofer without hesitation – especially if your taste in music runs to electronica, drum ‘n bass and classic rock.