TIMES change, and manufacturers have to change or adapt their products to the changing market accordingly, or otherwise see themselves muscled out by competitors, old and new. This mentality is instinctive in the business world, which accounts for the perceived need for products to be new, or renewed (“old, with new packaging”), to retain attention.

But what if you have a proven, well-received class leading product in a competitive segment of the market? Do you change it? How extensively? My guess is Musical Fidelity was faced with this when re-evaluating the position of its M6i integrated amp. That previous M6i model came ready with what must have looked like the ideal battle kit for the second decade of the 21st century, sans phono stage and with a basic USB DAC embedded.

But with the vinyl revival gaining momentum and computer audio virtually becoming the de facto main digital source for many, MF must have had a headache as to which to prioritise when revising the M6i into its latest iteration, the M6si. The company knew it had to do both, I suppose, but I suspect the former got a little more TLC as I was more impressed with the performance of the internal phono stage than I was with the USB DAC. But more on this later.

BITS AND PARTS: While not exactly monstrous by today’s standards, the M6si would still be considered a big integrated amplifier by many, with dimensions of 440 x 125 x 400mm (w/h/d) and a weight of 16.6kg. Not something you’d want landing on your head from above!

The M6si is a lot of amp indeed, being rated at 220 watts per channel into eight ohms. Most rivals clock in at the low to mid one-hundreds, if they can even reach triple figures into the same load.

Apart from the phono and USB inputs, one gets four line-level RCA/Phono inputs and an XLR balanced input (in pairs, of course), one of the RCA inputs being configurable to accommodate being controlled from an external AV set-up.

The phono input has a rated sensitivity of 3mV nominal (MM), 0.4mV nominal (MC), the input impedance fixed at 47kOhms (both MM and MC). The input to the DAC is USB type B, accommodating data of up to 24-bit/96kHz resolution. An SPDIF RCA or BNC input would’ve been nice, but one can’t have it all.

Fit and finish are excellent and all knobs and buttons (which are a little small if you have fat fingers) felt firm to the touch. The review sample had a nice, uh, “matt silver” faceplate but the M6si also comes in matte black, if you prefer. I grew to like the large centred silver volume knob, sitting dead centre of the amp. While it is motorised and can be controlled from the supplied remote control unit, I tend to get up off my tushie and walk to the system these days.

IN CONCERT: In terms of sonic personality, the M6si comes across as solid and authoritative, yet with an almost easy, calm demeanour, favouring a slightly more laidback presentation than any notion of “strictly neutral”. It all seems to start from the solid foundation laid in the lower frequency region.

Yes, this has been said of other integrated amps in this price class, but the extent of such feeling goes almost undescribably further, reminiscent of big separates – it makes rivals which I had considered “powerful” look like the tough guys who got bounced around by Arnie-in-the-buff in the early sequences of the Terminator 2: Judgment Day movie. And I am not even using full range speakers – the Sonus Faber Guarneri Homage sure does love a bit of power, controlled power, shoved up its terminals to open up and more firmly plant its feet, and this is exactly what I felt like was happening with what I heard.

The power capability of this amp never needed to manifest itself by overtly showing itself when playing loud; and yes, it can go very, very loud, much more so than anyone on the right side of sanity would usually require in a domestic setting. The sense of control is firm and unshakable. There seems to be no hiss or other low-level noise to give the game away that the M6Si is ready to come out firing when required, like a skilled ambush predator. When it does, everything sounds solid, big and well, virtually just right, no exaggeration and no loss of control. 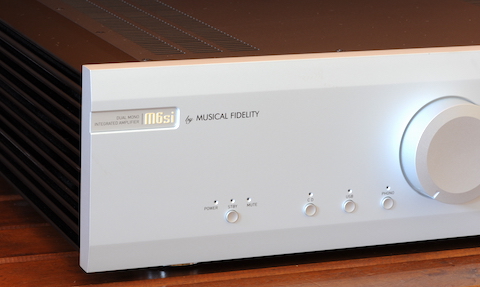 Playing Rimsky Korsakov’s Dance of the Tumblers (Oue – Minnesota Orchestra; Reference Recordings LP), the M6Si showed what was needed to bring the recording to life, and this not from being able to just play at high volume.

Moving on up, the midrange and treble were just silky smooth and free of grain and glare, sibilants in voices especially cleanly delivered. It does not sound like how classic tube amps sound but here it pretty much delivers a sound reminiscent of some of the top solid-state amps I have heard.

The transparency factor is high indeed though, if my memory hasn’t failed me, the M6si can’t quite outdo the magnificent BMC PureAmp when it comes to getting out of the way of the signal, the latter, for me, being exemplary of how high resolution and smoothness can co-exist.

The M6si’s acoustic picture is, not unexpectedly for an amp with such firepower, big and deep with wide sound stages, all delivered with fine clarity. Within this, there was a well-defined depiction of aural images. The music itself is delivered in an involving manner, capably exposing the inspired artistry in some of the more complex material tried – no “big, lazy amp” syndrome here; nothing fat, lumpy or leaden footed which some big-powered amps can sound like. No way would it cause one to become more selective in favouring less upbeat material to hear the amp at its best.

The internal phono stage is a real gem. I compared it to my regular Parasound Halo JC-3 running balanced into the M6si’s XLR inputs and while music from the JC-3 sounded that bit better in just about every sonic aspect, dynamics and sense of rhythmic drive especially, one simply cannot complain about what MF has packed into this unit, seeing as there was hardly a price increase over its M6i predecessor (which didn’t even have one!).

For the USB input, I similarly compared results from hooking up a MacBook Air to the really high-performing Exogal Comet DAC, again via XLR connection to the M6si’s balanced inputs, to running the MacBook Air directly into the M6si’s internal DAC. Again, no surprises that the former was better, but if digital music is your main source, you will still find yourself enjoying the results. If you want DSD and the 24-bit/96kHz gateway is simply not enough for you, you will have to “go external” to work around the M6si’s limitations.

APPLAUSE: On sound quality alone, the M6si is already a very strong contender for your money, compounded by most rivals lacking its power and either one or the other of the M6si’s wonderful internal phono stage and very respectable USB DAC. Listener fatigue was very low and the internal digital processing and vinyl replay capabilities were impressive.

BUT…: I had very little to complain about when looking at this unit against similarly-priced rivals I have heard in recent time. It needs time to warm up from cold to get to optimum sound, but which amp is immune from that? Just taking it as a line-level integrated amp, however, if one didn’t need the M6si’s higher power, recent offerings from Parasound, BMC, Naim and Hegel, to name a few, all have their merits, but miss out on auditioning the M6si at your peril!

FINALE: Take MF at its word that this is indeed a preamp with two monobloc power amps in a single casing, helping you avoid gear clutter and saving you from needless multiple power cords and interconnects. Choose matching components which best exploit the Musical Fidelity’s M6si’s strengths (and I suspect these will probably cost more than the M6si itself), and fall out of the hi-fi rat race and start re-focusing on enjoying your music again. A mandatory audition, even if you had contemplated separates, by my reckoning.