The new Rega Planar 3 turntable – for a lifetime 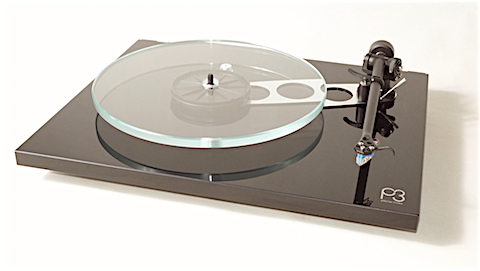 THE announcement of the new Planar 3 by Rega came as somewhat of a surprise for some of us. It’s not as if sales of the RP3 were dwindling, but I suppose if the company were to want to reboot this old faithful, now would be the appropriate time to do it, with the vinyl revival in full swing, and the competition staying hot as ever, rather than chance it at a later time when fortunes may change yet again for the vinyl LP format as the premier music carrier in physical media sales.

Placed beside an old Rega Planar 2/RB250 unit from the time when Margaret Thatcher was still the British PM and Meryl Streep was better known for winning the best actress Oscar for Sophie’s Choice than for playing the former, the 2016 Planar 3 manages to make the elderly unit look somewhat dumpy cosmetically.

The gloss black review unit really does look dapper, and I was told by Kim S Tay, Rega’s head of marketing for Asia (he used to sell Regas from more than three decades ago when on the retail side), that the white version is being snapped up all over the place as it looks even better. 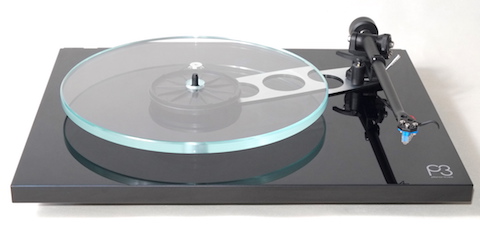 BITS AND PARTS: Yes, the new finish is gloss-coloured but no, you do not get an RP6 plinth on the cheap. The plinth of the RP6, as are those of the P3-24 colours series, are better constructed, but you obviously would have had to pay a premium for them. The 2016 Planar 3’s plinth seems based on the construction techniques and finish seen more recently in the “Queen Edition” of the Rega RP1.

Tay emphasised that among the less obvious performance enhancing parts to take note of are the newly re-designed bearing, and not just the component itself but that Rega have come up with a fitting technique that the company claims lowers the noise floor and reduces stress on the bearing itself. Tay did say this makes dismounting the bearing if any servicing or adjustment would be required a more challenging task for Rega, but then that’s their problem as manufacturer to live with, not the user’s. Also re-worked is the sub-platter in conjunction with the bearing, which is overall built to tighter tolerances.

Visible from the go is the new, much more transparent, “Optiwhite” polished glass platter. Its thickness is 12mm and, cosmetics aside, it is also claimed to have been improved in accuracy of manufacture. The Planar 3’s top bracket of the bracing system, first seen on the RP3 (putting the arm and bearing in a single enhanced-rigidity plane), now resembles the metallised version fitted to the RP6. 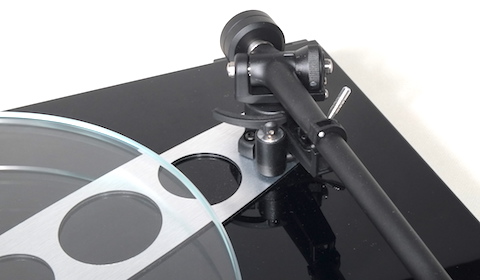 The new RB330 is clearly descended from the old RB300, (which then became the 301 and had the arm tube re-worked in the 303) but changes have been made to the bearing housing and counterweight. The 330’s cables and plugs make those on a mid-1990s RB300 look like chopped liver … that had been chewed and spat out.

Rega is sticking to its guns that variable VTA adjustment is not a critical must-have, and this may or may not be related to the fact that they want you to use their cartridges. However, if you need to vary the factory standard height, optional spacers are available to raise the arm. And getting to the bottom of things, the Planar 3’s feet have also been revised with an aim toward improving isolation of the player from the surface it is placed on.

Another change is the on/off switch has no migrated down under – the plinth that is. Hidden under the front left, it is arguably better placed as it is one less item to blot the landscape that the wonderful gloss top creates. Rega don’t want you to turn the motor off and on again every time you change LP sides anyway, so, in a way, one wonders what took them so long to go about doing this. The ability to hook up the optional TT-PSU power supply upgrade is a fine workaround for making the power button more reachable (and for better performance as well as convenient speed switching from 33.3 to 45 rpm) if reaching under the plinth is stressful for the user. 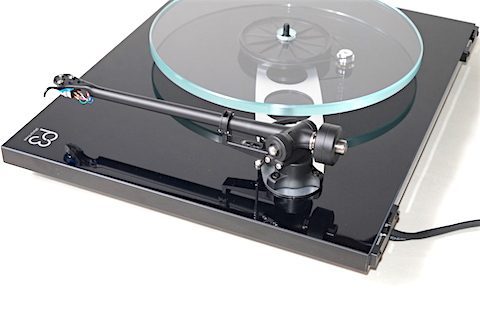 So just what are the two parts which Rega say were carried over from the preceding model? Apart from mentioning that there were two, I’ve not read these being stated anywhere by Rega themselves. My own guess is it’s the 24V motor and the arm tube. The former, obviously sourced from outside suppliers (I don’t think Rega ever claimed their motors were made in-house) runs off the same power supplies designed for the RP6 and optional upgrade for the preceding RP3, so that’s a logical guess, and since changing a mold is an expensive affair, which Rega had undertaken when the RB301 became the RB303, I’m not sure if the time gap between the 303 and the 330 is such that it would make commercial sense to have reworked the mold yet again. Some commentators have suggested that it is the two dust cover hinges which are the ones which have not changed, so that’s possible too.

Vital statistics? Dimensions are 117 x 447 x 360mm (h(with lid)/w/). Its weight of 6kg, like its predecessors, won’t impress those who believe England should be sold by the pound, the more the better. If you feel that way, Asian rivals in the form of the Pioneer PLX-1000 and the Audio Technica AT-LP120 may perhaps be more up your alley. 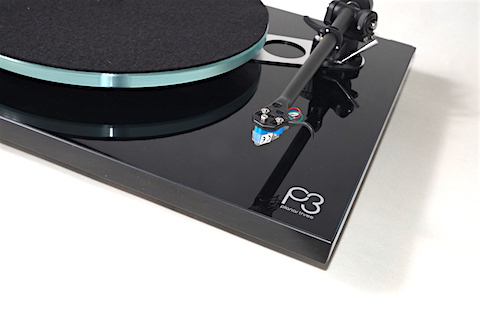 IN CONCERT: For reasons I still am uncertain of, the Rega Elys 2 which came pre-mounted in the review sample of the Planar 3 sounded brittle and, at certain frequencies, downright coarse. As there were no adjustments to the Rega cartridge mounting, I proceeded to check the contacts at the cartridge pins and found that these all fitted snugly. On substituting my own Rega Exact, which is Rega’s top MM model, things got vastly better and this combi was what I used in the listening tests for the Planar 3.

I have now reviewed several Rega turntables, the last being the delightful RP6, and, in my view, they just keep getting better. I did not have an older RP3 on hand to conduct comparisons, but the rhythmic throb and ability to capture the beat which is the hallmark of the Rega sound was immediately apparent. With such a strong musical foundation, and nice earthy presentation, one is virtually assured of being pulled into the performance the musicians worked hard to put into the grooves of their LP albums (even if the studio captured it in a string of ones and zeros!). It’s just a question then whether the “hifi” aspects have improved over the older models, and if they happen to coincide with one’s sonic priorities.

The Planar 3-Exact combi produced a firm bass response which not only sounded nicely extended with good power, but conveyed the skills of the rhythm sections’ musicians in tracks across just about every genre. Joe Cocker’s Sheffield Steel album is a favourite of mine, and it certainly sounded as groovy as with some of the more expensive resident turntable units. Bass detail was very good with cellos and bowed double basses sounding sonorous yet distinguishable in overall character during several classical pieces.

Midrange performance also seems to have become tighter and more delineated – Sting’s multi-tracked vocals on Don’t Stand So Close to Me coming through clear with his “pleaaaase doooon’t staaand sooo cloose to me” backing line toward the end of the track sounding more distinct than I recall hearing on earlier Regas. 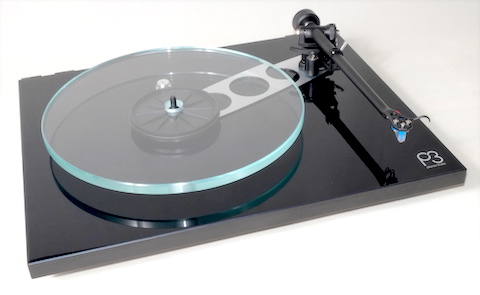 Female vocals sounded no less compelling – I actually prefer Linda Ronstadt’s two covers of Warren Zevon’s Carmalita and Mohammed’s Radio to his originals, and with a smoking band in tow and help from some strong backing vocalists, I just wondered to myself just how many from the generation who heard these songs when first released would have done so on a late-1970s Planar Three? Whatever it is, they would have heard a much wobblier sounding version – I feel confident in saying that, drawing from my experience with early generation Planars, speed and pitch stability of today’s Planar 3 versus that of its forebears is a no contest. And I’ve not yet heard what the TT-PSU upgrade would bring to the party yet.

Treble performance is also fine, no stridency or splashiness. Stewart Copeland’s cymbals sounded clear and precise, with good shimmer and decay over several Police albums, and Ruggiero Ricci’s violin on the Symphonie Espagnole LP from Decca, which, to my ears, can be challenging for lesser turntable-cartridge combinations sounded intense yet well-controlled, letting the virtuoso playing come through comfortably. Funny thing is when packing up the Planar 3 to be returned to the local supplier, I re-mounted the Elys 2 which had had to sit on the sidelines all this while.

Hooking it up to the Parasound JC-3 for one last check, I put on Eric Clapton’s Just One Night album and, to my surprise, none of the problems I heard when I first received the turntable unit were apparent. I simply have no explanation for this. In a conversation with Tay, I had told him of the problem and he alluded that there had been some issues with some of the components in the cartridges from Rega’s external suppliers but that this was a problem that was now in the past. Rega and its local reps will exchange any defective unit brought to their attention and which has suffered no user abuse, with absolutely no issues. 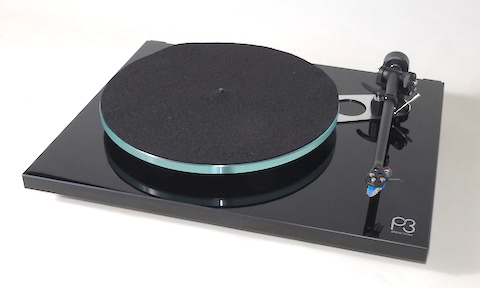 APPLAUSE: Looking better than ever before, and sounding it too, the 2016 Rega Planar 3 takes some beating. It’s still one of the easiest turntables to set up and while a little care in siting the unit is demanded (new feet or no, don’t go putting it atop your subwoofer, ya?), it is able to display a performance many will find more than satisfactory almost straight out of the box.

BUT…: Look mate, it’s a Rega. Unless you pay for the optional TT-PSU, get used to the fact you have to lift off the platter, change the position of the belt on the pulley, and replace the platter and mat when switching from your 33.3 LPs to 45rpm premium re-issues or singles; same today as it was round about 1976 when the original Planar 3 made its debut. And yes, a hairy felt mat is what it is, so be careful of it sticking onto your LPs when you go about changing sides.

FINALE: Many a Rega 3-series turntable unit has provided its owner with long, trouble-free service and enjoyable music, and some have even stayed with its first owner in his/her lifetime. Today’s Rega Planar 3 looks very much set to continue doing just that. Firmly recommended.