– Lack of calibration software and not much of a two-channel music experience.

DOLBY ATMOS has been around for a few years and is now quite a stable platform, and it is increasingly common for moviemakers to mix their surround audio effects in this format. More and more movies are now screened in an ATMOS audio mix, either in the cinemas or on Blu-ray discs.

While cinema-goers are now spoilt with a more immersive sound, home theatre enthusiasts face the space challenge of setting up at least five speakers, a subwoofer and four ceiling speakers to achieve the minimum 5.1.4 ATMOS set-up requirement. This becomes a bigger challenge if the set-up is to be installed in the living room.

Samsung has come up with an alternative all-in-one, space-saving ATMOS soundbar, complete with wireless connectivity for the subwoofer and a pair of rear surround units with a built-in ATMOS up-firing speakers.

The Samsung HW-K950 Soundbar provides the minimum 5.1.4 channels through its intuitive speaker design. The soundbar unit houses the front-firing channels (centre, left and right) and a pair of front up-firing ATMOS drivers. The rear surround speakers are equipped with the rear up-firing ATMOS drivers and to complete the set-up, a subwoofer is also part of the whole equation.

What is really interesting about this package is the wireless connectivity between the soundbar unit and the rear speakers and subwoofer. A total of 15 drivers are built into this whole package, providing a wider dispersive effect.

The system provides a whopping 500 watts RMS and is equipped with six DSP modes to choose from. It does not stop there. For two-channel audio, there is also Bluetooth connectivity. It also supports Spotify, Deezer etc, streaming as well. The system is capable of handling HD Audio up to 24-bit/192kHz resolution and supports Samsung’s multi-room application.

Those with an existing Samsung SMART TV and Blu-ray/4K UHD player will be happy to know that the remote control unit that comes with the HW-K950 will integrate your existing equipment into the system and allow you to control your whole entertainment set from one remote commander.

Connectivity between the components is easily set up. Just turn on the soundbar, subwoofer and rear speakers and all of them will automatically detect each other. Once connected, a blue LED lights up indicating successful pairing. 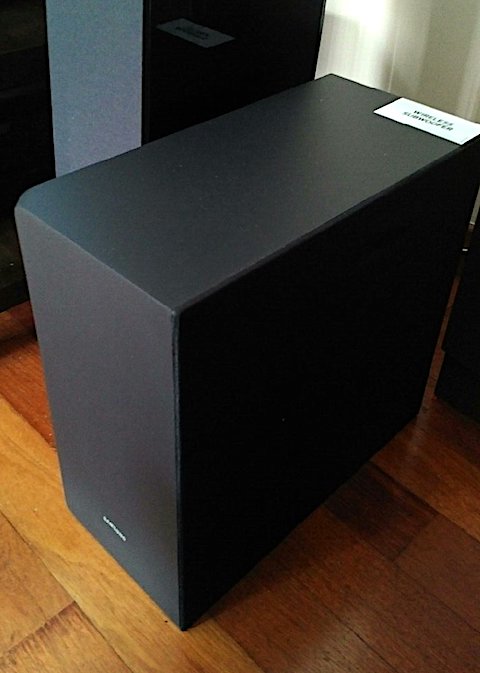 Similarly with Bluetooth and online music streaming services such as Spotify. Using your mobile phone or tablet, just follow the step-by-step instructions and you will be enjoying wireless music within a few minutes.

There are two HDMI and one optical input at the rear of the soundbar. However, there is only one HDMI output to the TV but it is equipped with Audio Return Channel module (ARC).

I connected the newly-launched Samsung UBD-K8500 4K UHD Blu-ray player to this soundbar to experience not only ATMOS, but also 4K visual on my Samsung curve TV. 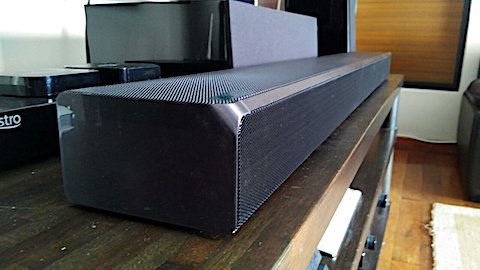 The biggest challenge setting up this soundbar system is the calibration. Modern AV receivers usually come with auto calibration modules which calibrate all speaker components to adapt to the room environment in order to produce the optimum surround effect. For this review, the calibration had to be done manually by increasing or lowering the volume for each speaker to achieve 75dB on the sound level meter app on my phone.

It is highly recommended to follow the guidelines by Dolby on the up-firing ATMOS with regards to height and the material used for the ceiling. The recommended ceiling height is between 7.5 and 12 feet and the maximum is 14 feet. The ceiling material should be reflective.

LISTENING
Watching the Star Trek 4K UHD Blu-ray disc, I was really surprised by the clarity of the centre channel from the sound bar. Even in a chaotic attack scene with powerful LFE, the dialogue from Spock and Captain Kirk was exceptionally clear.

The ATMOS effect was, of course, the highlight where the sound effects of falling objects tumbling down wreckages and laser beams being shot downwards were not only immersive but quite realistic and in sync with the whole movie experience. The rear ATMOS sounded a little thin at the beginning compared with the front ATMOS but a slight volume adjustment managed to overcome that. Sitting in the middle gave me the feeling that I was actually surrounded by the actual attack scene.

The performance of the subwoofer was also unexpectedly very engaging. Since it is wireless, I decided to site the subwoofer at the rear to test its wireless connectivity and effectiveness. Throughout the movie, the subwoofer worked tirelessly, delivering a rumbling bass effect that vibrated my sofa and the floor. Any explosion scene will grab your attention as the subwoofer will shake your seat. The effect dispersion could be felt across my viewing area.

Moving to a Superman: Man of Steel, the surround experience was even more engaging than Star Trek. The scene where Superman rescues people from a burning offshore platform provided me with even more engaging immersive effect. It was also directional (versus just a blanket noise effect); hence it related to the image being viewed. The swooshing sound of Superman flying from top right (rear) to bottom left (front) can be easily heard, giving me the directional perspective of the movie I was watching. 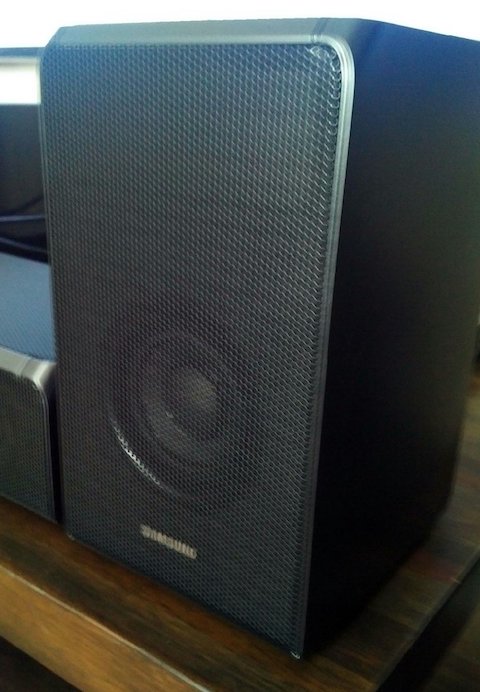 Moving to two-channel audio for music listening resulted in a different reaction. The sound is quite lifeless. Even after I tweaked certain parameters, I just could not enjoy listening to the system. With the audio channel now focused on the front, I could not get the same level of enjoyment when watching movies.

On Andrea Bocelli’s Time To Say Goodbye, the emotion of the song could not be delivered as well as from proper floorstanding or bookshelf speakers. For heavy metal or rock tracks such as Metallica’s Enter Sandman, I was expecting a heavier impact but the guitar solos sounded flat and the drumming, box-ish.

THE LAST WORD
If you are looking for a simplified, no nonsense home theatre soundbar for your home, the Samsung HW-K950 is one worth auditioning. It is a Dolby ATMOS certified system and does not fail to provide the immersive ATMOS experience but in a smaller package.

Of course, you should not compare it with a full-fledged AVR-mega-huge-speaker set-up but for its intended audience, this Samsung system managed to deliver its main objective. Yes, the two-channel music performance is not up to par but with this level of ATMOS delivery, you will be watching more movies than listening to music.

A word of caution, though – I do believe this system works well in a moderately-sized room and not for bigger halls. In order to ensure you can experience the ATMOS effect, it is recommended that you use this system in a venue that follows the ceiling height and material recommendation by Dolby.