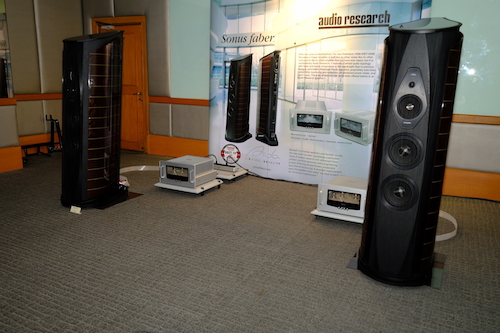 AS with previous years, the Editor didn’t really give me any specific items to cover at this year’s KLIAV Show, its 25th edition. I decided my take on this year’s show would have a loudspeaker-focussed slant.

It was an interesting contrast to see some exhibitors stuff big loudspeakers into small rooms, while some took the exact opposite route. Of the little fellas, two models stuck out for sounding big-voiced beyond their dimensions when operating in spaces larger than what their designers must have optimised them for. NEAT Acoustics’ little IOTA Alpha had to shout out loud in the show’s 9th floor open foyer area, but gave enough hints of its capabilities that made this the one I’d like to take for a test run if the importer would supply a review pair. 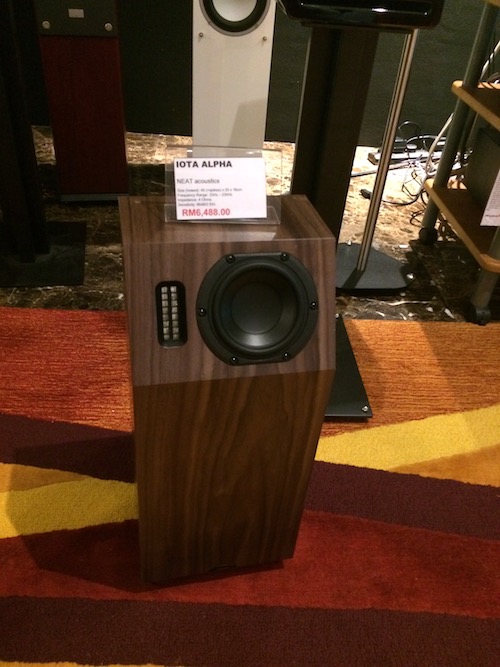 Upstairs on the 12th, LA Audio’s little A-F402 did a male country and western singer proud by convincingly filling the room with his recorded performance with a presence that surely must have surprised a few visitors. The dimensions and shape of the F402 reminded me of Pioneer’s Andrew Jones-designed SP BS22LR. 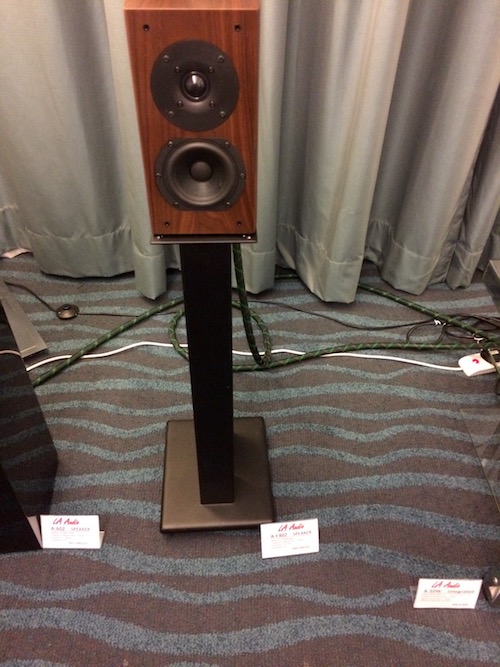 Of the big ‘uns, in the settings they were respectively placed in, one or two almost had me repeating the line that Messrs Schwarzenegger and Glover each spat out when first seeing the Predator unmasked in the first two instalments of that movie franchise. They may not have formed a pretty sight, crammed into too small a room to properly house them, but most worked well enough considering show conditions are never easy.

I took a liking to the results of the Spendor Classic 200 but when a moderate black square box (which describes many a British loudspeaker) gets upsized to a spanking big black square box, it is not going to win too many a spouse’s approval for domestic occupation, by my reckoning. 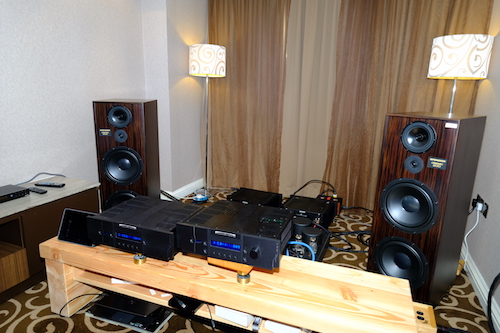 One biggie which managed to look good (to me, anyway) was the JBL K2 S9900 (uh, I think it’s the 9900). Driven by a full suite of Mark Levinson electronics, results, for its placement in what was too small a room for it, were still impressive. 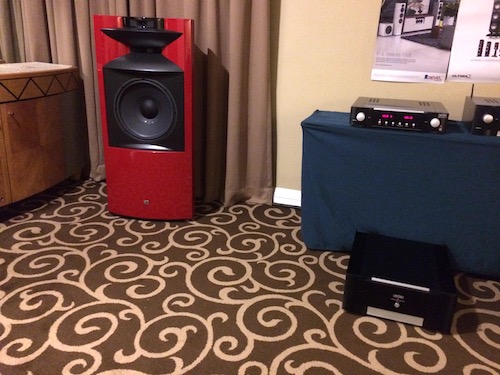 When it comes to making big loudspeakers look beautiful, though at a price, Sonus Faber would be expected to be the ones to do it in style. Both their Aida II and Lilium models could pass for works of art, and the sounds of each pair at the show were not in any way hurt by having Kronos Pro turntables front them as source.

Looking somewhat slightly less elegant, but by no means un-elegant, were Venture Audio’s Xtreme loudspeakers, with a vinyl front end source by Triangle Art (not to be mistaken for French loudspeaker manufacturer Triangle), which truly emphasised the word “Art” in its name. The Triangle Art looked like it had two rotating platters, but unlike the Kronos, they looked to both be spinning in the same direction. The Ventures were easily capable of eardrum-busting SPLs while remaining composed (as in no smoke or bottoming out noises from its many mounted drivers), and literally shook me with a remixed version of Modern Talking’s You’re My Heart, You’re My Soul (yes, that Modern Talking). 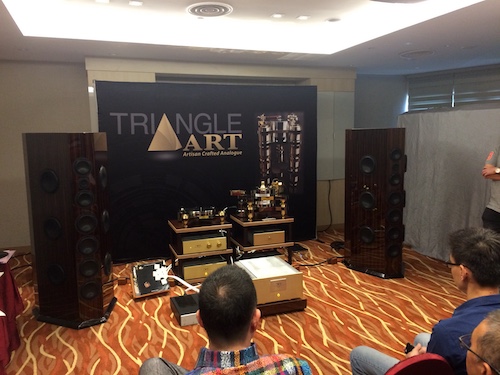 Of the fringe, or non-too-mainstream, examples of loudspeakers, I have begun to like single driver crossover-less implementations, and was impressed with the from-across-the-causeway (Republic of Singapore, to our foreign readers) Gamut Magnetic Laboratories offering (no, nothing to do with Danish Gamut Audio outfit). Designer Ghem Ming Leong is living proof that chewing-gum deprivation need not have adverse effect on one’s ability to engineer a very attractive sounding loudspeaker. I thought to myself, price versus results-wise, the Live Acoustics room was a bit of an oasis of sanity as compared to some of the other rooms with its Line Magnetic valve amplifiers and valve-sporting DACs, as well as, of course, the aforementioned GML loudspeakers. Not cheap, mind you, but lovely results indeed. 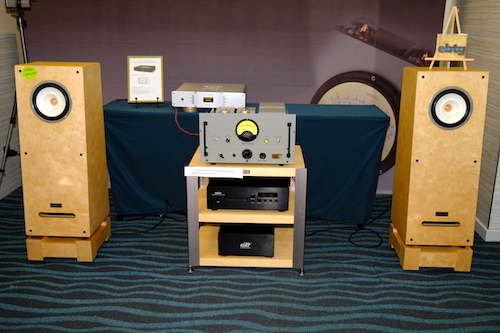 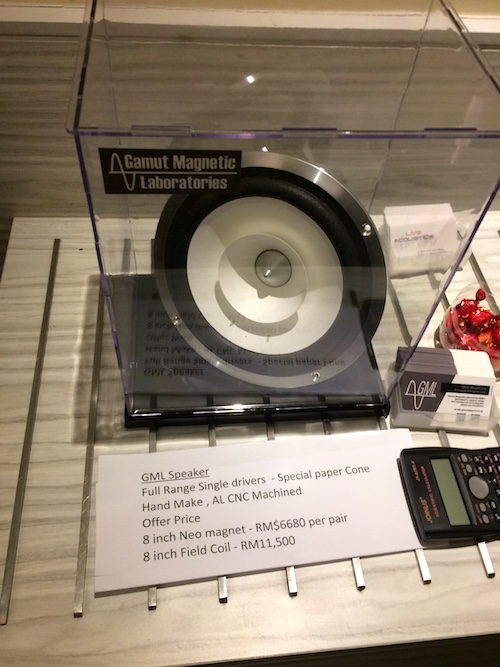 When it comes to active set-ups, pro-oriented outfit Loudspeaker Technology Ltd’s ATC brand is a recognised leader. Kenny Sin of Hiway Laser graciously obliged and ceased playing whatever that gawdawful audiophile recording that was then-on to switch to Paul Rodgers belting out Rock Steady with Bad Company. This is as good as it gets, folks – well, at least at that moment for me. Very, very hard to stop myself from doing the air tambourine make-an-ass-of-yourself-in-public thing when the first riff hit me. If I had RM93,200 for that ATC SCM50 (active) to spare, those babies would be in my abode now. They are not little loudspeakers, but are quite manageable size-wise and sound waaaay bigger than they look. 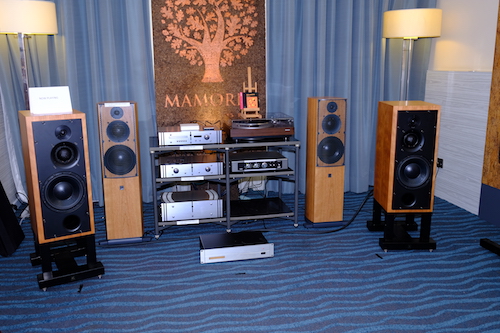 For those who just can’t accommodate loudspeakers out into the room and must have them hug the boundaries, two offerings at the show really delivered the goods. The first would come as absolutely no surprise – Audio Note loudspeakers live in corners and if you like the sound they produce (and why would you not?), they are the ideal solution. A surprise came in the form of the Heco Direkt Einklang with its single eight-inch driver and tripod feet. At the end of a simple system of Soul Note CD player and integrated amplifier, they really sang coherently with a well-balanced voice. Well worth checking out if boundary placement is a must for one. 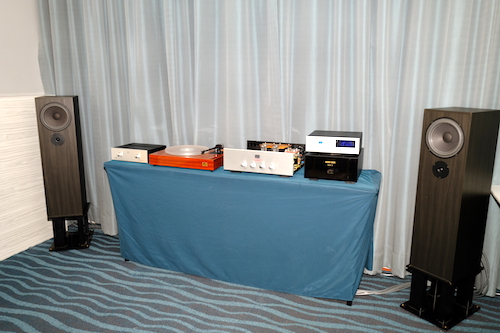 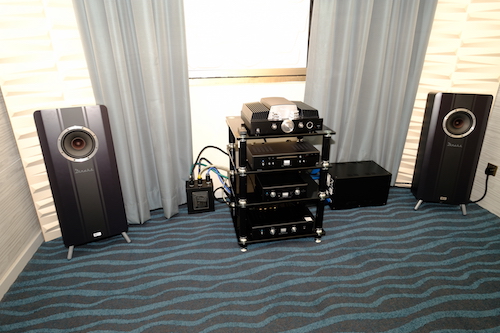 Obviously, I could not cover everything. There were very impressive Kharma, Bowers & Wilkins, Dynaudio, PMC and other offerings but there’s only so much space for this brief highlights snapshot.

Observations generally: There were fewer exhibitors this year. The headfi sector seemed to me to be the healthiest of the show. In terms of trends, I noticed a proliferation of valved electronics this year, with BAT, VAC, LA Audio, Line Magnetic, Absolare, Quad, Yaqin and several others represented. VAC had been absent from the local scene for some time and their Renaissance and Signature ranges should re-establish the brand as a leading contender again in the luxury valve amp sector. Also apparent was the merry-go-round of local dealer and or distributor changes, with Wilson Audio, Linn, Creek and Kronos, to name a few, seeing changes of hands.

Biggest underachiever mention, for me, had to go to the room in which the Sony HAP-Z1ES was being demonstrated with the brand’s own high-end oriented integrated amplifier and loudspeakers. I have heard the streamer as well as the amp on other occasions and felt that there was just so much more performance in reserve. When Sony decides it wants to do something right, it usually does get it right. Chalk this one down as yet another system which had a performance let-down due to tough show conditions.

Other personal favourites of the show were the retro-looking McIntosh MA252 hybrid integrated amplifier and the entire FM Acoustics system, the latter probably not making the best noises from a “hi-fi sound’ lover’s perspective. But it did something rarely encountered, which is let the music get under one’s skin to the point that I did not really care if I was sitting off centre way to the corner with no stereo image to speak of. I heard music, a sense of why a given musician was great and not just competent, something I think the brand’s adherents “get”, as otherwise they’d be wondering what kind of flake would be willing to pay this kind of money for this kind of “sound”. Sadly, I won’t be able to afford their stuff anytime soon. Almost makes you want to nick your wife’s Hermes Birkin handbag to hock it for the dosh! 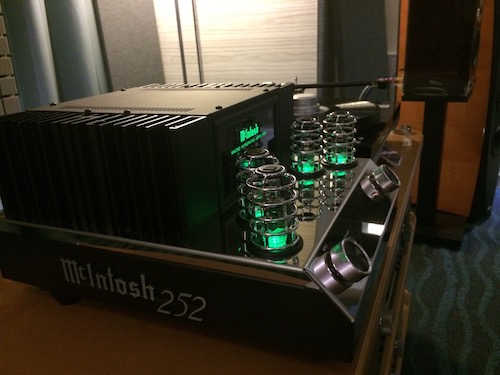 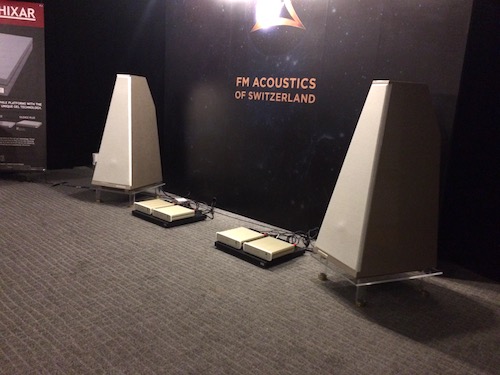