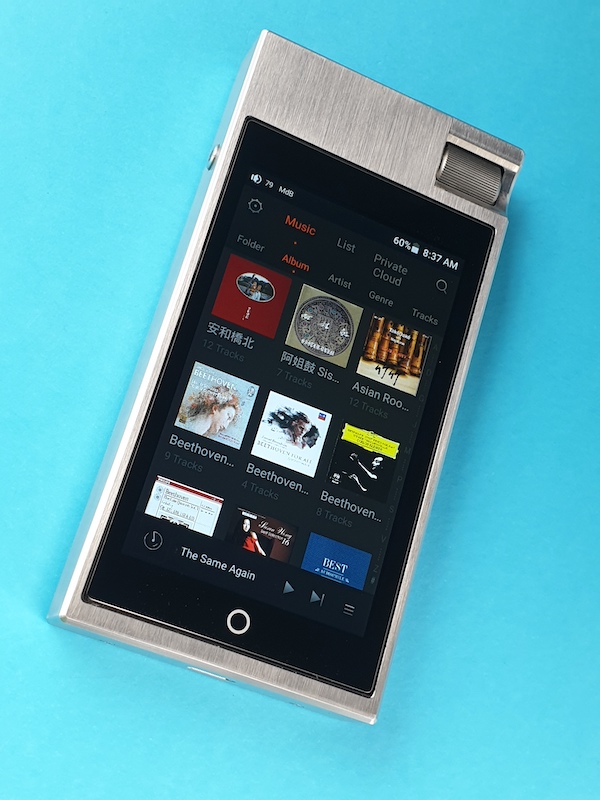 + Amazing clarity and detail; neutral tonal balance that allows you to pair it with a wide range of equipment downstream; wi-fi and Bluetooth connectivity; Android OS allows installation of external apps; two TF card slots mean up to 800GB of extra storage; solidly built and beautiful unit.
– Unpolished firmware is too obvious to ignore; heavy and bulky – it’s square and thick, and doesn’t feel good in the pocket or hands; digital out requires proprietary cables.
Sound: 8/10
Value: 7/10

TO most casual music listeners, their smartphones are more than enough to satisfy their needs. As a playback medium, Spotify is hugely accessible due to its affordability and impressive music library that can be curated to one’s tastes. But a smartphone needs to fit other more important functionalities into it, limiting how good a sound it can produce.

So, if you’re very serious about audio, you will want to get a dedicated player that does not compromise on sound quality – like the Cayin N5iiS digital audio player. It succeeds the N5ii, with Cayin having made some tweaks under the hood. Re-casing the new model in a machined stainless steel chassis makes it substantially heavier at 248g against the aluminium-bodied N5ii’s 150g.

The front of the unit is dominated by the screen – a 3.5-inch LG panel IPS TFT display with 800 x 400 resolution and a touch back button at the bottom, while the back is covered with a patterned glass panel. Everything is right-angled and chamfer-cornered, so holding it in your hand does not feel very comfortable. It does, however, come with a pleather case that makes it slightly grippier while providing good protection for the shiny surfaces. The fit and finish of the case is amazing, but because of how tight the fitting is, the case will press the side buttons when you slide it on or off.

There are four buttons on the unit; a power button on the left and three playback buttons on the right for play/pause, next, and previous. Below the playback buttons are two TF card slots for expansion. Although it already comes with 64GB of internal storage, that space will be filled up quickly once you start saving DSD and FLAC files. Two TF cards will provide up to 800GB of additional storage for your lossless library.

Volume is controlled with a physical scroll wheel but the placement makes it hard to scroll. Its saving grace is the ability to adjust the volume using the touch screen. Volume is divided into 100 steps and you can choose between three gain settings to accommodate different headphone and earphone sensitivities.

The unit has two headphone jacks on top – a balanced 2.5mm TRRS and an unbalanced 3.5mm TRS that doubles as a line out. There is a USB-C slot at the bottom for charging and file transfer. If you have Cayin’s proprietary cable, the USB-C slot also doubles as a coaxial out but unfortunately, I didn’t have access to compatible cables to test it.

Additionally, there’s also Bluetooth connectivity that allows you to pair the N5iiS with a Bluetooth headphone and other compatible playback devices. The range is respectable and it may shorten the 10-hour long battery life. I managed to get it to play non-stop for slightly over 11 hours on my JVC HA-S500, playing at medium gain with 50/100 volume.

IN USE
Testing and listening were largely done at the office where I spend most of my time. The unit got a lot of praise from my co-workers because of its beautiful build quality. Most of them picked up the unit’s major flaw as well – the UI lags and some incompatibility between the hardware buttons and external apps.

I also took the unit over to CanJam Singapore last month and the battery lasted long enough for a whole day of use. The balanced out sounded great and offers better separation as well as a perceived blacker background compared with single-ended. There was one hiccup – the unit lagged while I was increasing the volume. It suddenly shot up to 72 and I found myself frantically trying to dial it back down. I was lucky I had set the gain to medium and wasn’t playing Slipknot or Slayer!

Other than the software kinks, operating the N5iiS was a breeze. The home screen shows graphic charts of your storage space. Sliding left cycles you through your stored albums, artistes, genres, and tracks. Interaction is moderately smooth, the transition animation does not stutter, and it’s easy to swipe down or swipe right from the edges to open contextual menus. These menus let you change settings such as gain level, line-out mode, USB connection mode, and launch external apps.

The playback screen also allows you to cycle through several skins – those of us who have been around long enough to use Winamp and the old Windows Media Player would know what I’m talking about. Cayin didn’t need to include any of this so I think it is a thoughtful gesture.

Another thoughtful feature is the Audio Priority Mode. The mode turns off all wireless activity and shuts down background apps, including EQ, to eliminate any interference and interruption from the native playback app. During testing with my Sennheiser HD525, Final Audio Pandora Hope VI, JVC HA-S500, and some demo units such as Noble Audio Khan, JH Audio Siren universals, Roxanne universals, RAAL SR1a, Audiofly AD1120 mk2, and several others, I did not hear any perceived differences between the mode on or off. But even then, I have always been a firm believer in eliminating unwanted processes (either hardware or software) to improve audio response.

LISTENING
Now that the user experience section is out of the way, we can move on to the sound. Cayin has been around for almost 25 years, making audiophile solid-state and tube equipment, so it’s no surprise the N5iiS makes sweet music. Having just discovered Regina Spektor’s What We Saw From The Cheap Seats album got me playing The Prayer of François Villon on repeat.

I’m not very familiar with this song to make an accurate assessment on the unit, but the deep-seated emotion embedded in the song made me appreciate the unit’s tonal quality. Perhaps because I’ve been too familiar with the Chord Hugo, the N5iiS sounds very neutral to me. Spektor’s beautiful vocals aren’t just heard but can also be felt – achievable if the vocal range reproduction is tonally correct and uncoloured.

Treble extension is impressive, as is the lower end. I made sure to try out Tchaikovsky’s Overture 1812 in its full entirety, played by the New York Philharmonic Orchestra. The brass section sounded tremendous with enough detail to reveal its layered presentation. Perhaps what got me hooked was its airiness when playing classical music as well as more mainstream genres like art pop and rock.

The N5iiS handled low end well judging by its presentation of Mombasa by Hans Zimmer. The bass notes in the track demand accurate playback to reveal their texture, and through the Cayin, I was left satisfied and smiling. It is by no means bassy – if anything, it is slightly less bassy than the bright Chord Hugo, but that’s hardly a fair comparison.

As a dedicated audio player, the N5iiS offers a very clean and crisp sound with a neutral presentation. It’s hard to find fault with its sonic quality, especially for the asking price. With good and capable headphones, the soundstage is wide and deep. Through my speaker set-up, it lent a believable soundstage that could have been mistaken for a full-sized source set-up.

THE LAST WORD
Whether or not you listen to music on the go, there’s always room for one more piece of audio equipment. Herein lies my dilemma – I am head-over-heels in love with the musical presentation of the Cayin N5iiS, but I am having a hard time recommending it to people who, like me, focus on the user experience as a whole. Perhaps future firmware updates from Cayin will fix the noticeable lag in the response.

That aside, the N5iiS is a heavy portable powerhouse and will cater to listeners who want a player with both sound quality and connectivity options. Oh, and did I mention it has two (two!) TF card slots?