ProAc Tablette Ten speakers – a pill for your space ills 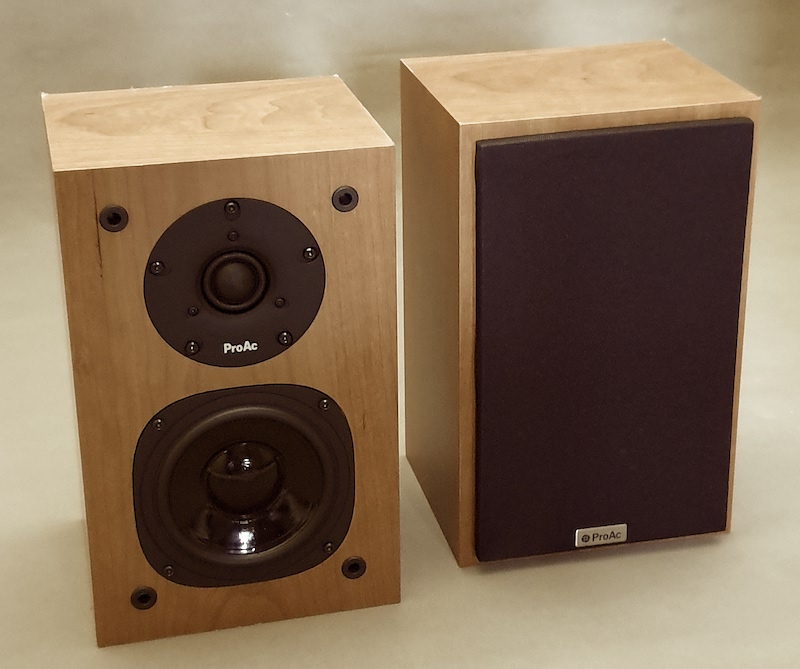 + Highly credible attempt to sound complete, with good bass for unit of such size; very satisfying human voice and string-and-wood instrument reproduction; does soundstage and imaging aspects very well, with ability to disappear acoustically when properly placed.
– Not the best choice for filling bigger spaces; bass and overall dynamic scale, though good, are necessarily limited; knowing there’s a “Signature” version which is claimed to be better but inevitably costs more.
Sound: 8.5/10
Value: 8.5/10

The staple high-performance two-way miniature loudspeaker continues strong into the eve of the third decade of the 21st century. While it is not an exclusively British “thing”, the little tykes from Blighty seem to still be the first ones to come to mind when one is considering such a pair of loudspeakers, though there is, obviously, capable representation from makers in other jurisdictions.

The BBC LS3/5A is, of course, the most celebrated of these British miniatures in this part of Asia, but the likes of Spendor, Harbeth, ProAc, ATC, Acoustic Energy, NEAT Acoustics, Rega, etc. all have models to compete for your hard-earned cash. ProAc’s award-winning Tablette series has been around longer than most, starting way back in 1979, and is now in its 10th iteration.

Looking rather different now, this latest version is of similar dimensions to the said BBC classic (19.1 x 30.5 x 15.9cm, when its predecessors were deeper than they were wide), and also moves from being a ported design to one that isn’t, again like its BBC-designed rival. You can’t argue with success, so it shouldn’t infinitely baffle one (We see what you did there! – Editor) as to why ProAc would switch its design approach for the Ten, which largely has to do with better room compatibility as much as seeking to improve the model’s performance.

The homage doesn’t end there, as the Ten also adopts the LS3/5As’ thin walls with heavy internal damping approach. The Ten’s drive unit complement consists of a 25mm Scanspeak silk-dome tweeter and a mid-bass unit custom-made by Norwegian manufacturer SEAS which I find interesting in terms of its description: “Paginna Mika”, consisting of reed leaves mixed with Mika and coated with an acoustic dope (uh, stop looking at me that way). (You didn’t try to smoke it? – Editor)

The review pair came in nice Cherry but the potential purchaser also has the choice of Silk White, Black Ash, Maple and Mahogany, and at extra cost, the Ebony or Rosewood finishes. The Ten’s fit and finish are excellent, though I would readily buy into the argument that, at this not inexpensive level, fitting the Ten’s grilles via a plastic stud and grommet arrangement looks so dated when certain rivals, even in their cheaper models, use magnetic fittings which keep the face of the loudspeakers nice and clean visually.

When it comes to specs, the manufacturer quotes the Ten’s nominal impedance to be at 10 ohms, by design or coincidence, with a frequency response of 55Hz to 30kHz, and a 86dB (1W@1m) sensitivity.

SETTING UP
The Tens were tried in several rooms, mostly small ones, with the largest being about 5m x 6m in floor area, and in the open-plan hall of a small apartment, sparsely furnished, which was thought to be the most likely kinds of venues they would find themselves singing in.

Placement in close proximity with front (or back, depending how you see it) wall, as well as pulled a little out, typically about 40-60cm, was tried. Lack of a port indeed makes placement options open up in terms of wall proximity, but some distance between loudspeaker and wall was still felt desirable for better results. Classic Linn Kan fans would argue that would defeat the purpose, I suppose.

I happened to have two pairs of 61cm stands available during the review period and for the uninitiated, it can still come as a surprise how the quality of the stands can have a large influence on the results obtained. The simple conclusion is – get the most substantial and solid pair you can afford if you want to get the best out of the Tens, an obvious statement to the point of, uh, stating the obvious.

Both single and bi-wiring were tried, my feeling being that the Tens seemed to like being bi-wired more (not always the case, and loudspeaker-dependent from my experience) as there was a seemingly better sense of openness and midrange freedom which the single-wire set-up lacked, at least with Cable Talk Talk Three cables, of which I had both single and bi-wire samples.

LISTENING
My usual loudspeakers nowadays are floorstanders, a pair of which sport double 15-inch drivers, so apart from running-in time, this listener also had to take time to re-acclimatise to speakers of the small box variety. To help me with this, I switched to almost exclusively listening to my old faithful, of-their-time low-budget leaders, the Mordaunt Short MS10is.

What the Tens give the listener in a small room is a good, authentic sounding presentation of voices and acoustic instruments. Midrange magic is, of course, expected to be on the menu, and the Tens deliver fabulously. They have an easy smooth presentation, slightly warm and laid back, which can be addressed with judicious pairing with suitable amplifiers, the more powerful the better, it would seem. I felt they sang best with the Odyssey Khartago Extreme monoblocks among the in-house amps available to conduct the tests.

Sonically, things are a little smaller in terms of image size, weight and tonal density, but there is more than sufficient volume and, arguably, the good subjective weight and extension perceived, more limited as these may be, may give better results in small rooms with jazz big bands and heavy orchestral material played loud than if one tried to get the same levels with fuller range larger loudspeakers, which would overload the room.

The Tens also present dynamic contrasts well, within their size (and room) limits, again especially when fed with more powerful amplification, demonstrating faithful tonality and a sweet top end which never got ragged with any of the test amplifiers.

For the lower frequencies, even on non-raunchy material like a nice dinner jazz trio playing, one can’t expect the lowest notes of the double bass or piano to be fully presented, but the the foundation rhythm is present and followable. When the raunchy stuff did feature, these ProAcs couldn’t quite “go to 11”, to repeat the overly tapped cliché, but still had a good sense of drive and rhythmic acuity, with fast jazz note runs and the likes of Deep Purple’s Lazy satisfying one’s need for speed.

As a subwoofer-friendly miniature, the Tens present a most attractive proposition. Matched with a James EMB1000 sealed box unit, with the objective of subtly bringing in the weight and low-level ambience rather than to emulate the boom-boom factor some car stereo enthusiasts live for, cello tracks gained that bit more weight and sonority and even dialogue in a movie, when the Tens were tested in 2.1 mode, sounded substantial and convincing.

THE LAST WORD
The world of miniature loudspeakers has changed by my reckoning, with active ones starting to get attention from more traditional audiophiles, and with mini-floorstanders such as the NEAT Iota Alpha bringing attractive alternative propositions to small room users. But there will be place for a quality mini like the ProAc Tablette Ten as there has been for the last few decades since the first model’s introduction.

Firmly recommended if you need a small quality loudspeaker. Me wonders how much better the more expensive reference signature model will sound.