Accuphase A-48 – a final-frontier power amp 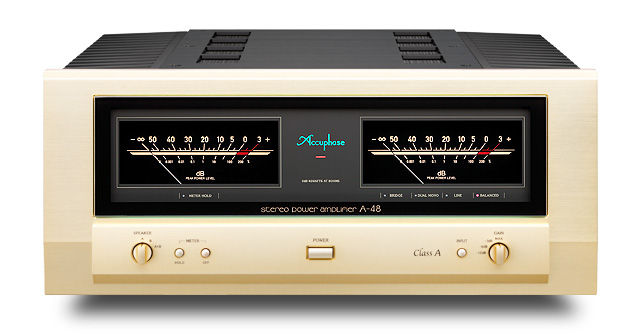 WHAT comes to mind in the realm of high-fidelity components whenever you are sipping champagne? It can only be the similarly-hued Accuphase components. Jiro and Nakaichhi Kasuga founded Kensonic Laboratory Inc in 1972 after leaving Trio-Kenwood Corporation’s engineering team. As with all start-ups, the business was based in Jiro’s home where they churned out small runs of high-end audio components under the brand name Accuphase. A decade later, the company itself was renamed Accuphase and the rest is history.

Fate had it that the Accuphase A-48 power amplifier would land in my listening room – I have always yearned for a serious listen and watch those alluring VU meters dance to the music. Accuphase has retained its timeless A-series power amp design cues – the A-48 is wrapped in a beautifully crafted metal chassis with a hairline finish aluminium top plate that exudes quality. The prominent champagne-hued faceplate has two dominant and softly illuminated VU meters with understated controls lining the bottom, whilst neat heatsinks with integrated grab handles hug the amplifier’s sides.

The MOSFET-powered pure Class A dual0-mono design is rated at 45 watts into eight ohms per channel and doubles up all the way to a mind boggling 360W at one ohm. The A-48 supports both bi-amping and bridged modes. It has a massive toroidal transformer with large 60,000μF filtering capacitors that take up most of the amp’s insides. A variable gain selector – 16-28dB -allows flexibility in pre-amp gain matching. The damping factor of 800 will surely elicit smiles from bass buffs.

SETTING UP
I placed the hefty A-48 (33kg) on a dedicated custom platform supported by brass cones. The rear panel is neat laid out with two sets of large speaker terminals catering to both banana plugs and spades, single-ended and balanced input sockets and operating mode selector. There is even a selector to toggle between positive and negative polarity for pin “2” and pin “3” for the balanced inputs. This is important particularly, as most Japanese equipment have reversed polarity for their balanced pin configuration. Very thoughtful.

I took the opportunity to have a four-speaker set-up – speaker “A” terminals were linked to a pair of Sonus Faber Extremas; “B” terminals were used for a single faithful Guarneri Homage speaker, for mono in bridged mode. I wish I had two pairs of LS3/5a units to hook up in a stacked configuration, inverting one pair above the other, with all four speakers playing together for the ultimate LS3/5a set-up.

My choice of preamplifier was a passive Simonte supermalloy transformer attenuator, which later made way for the preamplifier section of a Vitus RI-101 integrated. I set the A-48’s gain selector to -3dB (which results in a +25dB gain) as I attempt to find the magic formula to match the preamplifier (selectable for parity or +6dB gain). Given that the dealer did not supply a power cord, I used a huge gauge power cord by a local specialist.

LISTENING
The A-48 was fresh, out from the box, and I had to break in the amplifier. Dutifully, I powered it up, taking a liking to the soft tactile feel of the power button. I thought I’d go easy on the A-48 with CD playback before switching to analogue equipment.

First impressions struck a familiar chord, reminiscent of my past life with tube amplifiers – I was greeted with warm and lush tones flowing through in a relaxed manner. The A-48 didn’t have the pace of the resident Vitus but was certainly much warmer and more laidback. The notes were sweet sounding but the top end was a bit restrained, lacking the usual airiness and extension I am accustomed to with the Vitus. The piano notes from the rightmost keys sounded hard in Tsuyoshi Yamamoto’s rendition of Misty (TBM CD2530). Give it some time to break-in, I told myself.

After a week of heavy duty running-in with Spotify over Chromecast audio, I made some changes to the set-up after realising the degree of transparency the A-48 possessed. Music came alive with pace and rhythm, making the A-48 and enjoyable listen. Dire Straits’ Sultans of Swing, from the band’s self-titled debut album (9212-021) rocked away as did the drum attack on Six Blade Knife – my feet were tapping all the way through the album . I also liked the weight and musical density the A-48 gave to the lyrical guitar solo on Guns N’ Roses’ Sweet Child of Mine (924 148-1).

The pace changed, with both Emi Fujita (PCKD 00122) and Eva Cassidy (G1-10045) singing Fields of Gold with such palpability against a starkly quiet background that you could just reach out to literally touch them. Apparently, the use of Teflon PCBs give the A-48 its low noise signature thus allowing every subtle nasal nuance of Chie Ayado’s powerful interpretation of Imagine (EWLP 0078) to flow through with the immediacy of a live performance as she varied the pace and timing of her vocals. I was smitten.

The gain control is a useful feature to change the character of the soundstage. I could vary the width and depth by simply balancing the input signal against the amplifier gain. Set to a higher gain, the A-48 produced a wider and deeper soundstage while the lowest setting brought the entire presentation forward with slightly compressed depth and layering. You can have Eva Cassidy standing anywhere between five-to-15 feet in front of you at will by simply adjusting the gain selector. You can also have the soundstage stretching beyond the speakers’ boundaries.

I went through countless classical recordings with the A-48 to come to this conclusion. Beethoven’s Symphony No. 9 with the Chicago Symphony Orchestra conducted by George Solti (Decca 6BB 121) was my favourite for this review; I could literally feel the expanse of the Foellinger Great Hall at the Krannert Centre for Performing Arts. If low registers are your fetish, the fourth movement, Presto, is simply heavenly. The A-48’s grip on the bass wind instruments will put a smile on your face as it did on mine. The separation and layering made their presence felt in the final allegro energico where various groups sing in unison.

What impressed me the most was the degree of control and linearity the A-48 possessed. I was amazed by its true colours coming through in full glory at low listening volume when I listened to Isao Suzuki & Motohiko Hino’s Foo Fou Fool album (M-12012A) late one evening. Not only could I hear Motohiko’s drumming and Isao Susuki’s double bass pizzicato technique expertly reverberating from the strings, I could also feel the weight of the bass strings from the Extremas in a perfectly linear balanced fashion when I played the music way too loud the following day with the VU meters hitting 0dB and beyond.

The timbre from the vocals, strings and particularly bass instruments rendered by the A-48 brought out a sense of realism and depth with subtle micro-detail that is absent from an actual live performance, such as the recent performance by London Chamber Orchestra inside the Petronas Philharmonic Hall, which sounded a tad rolled-off for my liking. At times, I wonder if hi-fi equipment has given me an unreal perspective from an alternate universe, where sound is always presented in high resolution.

Over a span of three weeks, I found myself exploiting the taut character of the A-48 by digging out album after album containing double bass, pipe organ and simply smashing percussions. The A-48 delivered full bosom music with a balanced weight, possessing a sense of immediacy that made the PRAT factor passé. For the finale, I relived my “play Misty for me” moment after the first one-nighter. The track showed a different character on the piano, after the amp’s three weeks of punitive break-in. I was irresistibly attracted to the rendition, in anticipation of the next hammer strike as the harmonics and sense of airiness drew me in deeper. This, I could live with, I whispered to myself.

THE LAST WORD
The underlying sonic foundation had a tinge of natural warmth, while keeping pace with the rhythm in a non-hurried manner. Your choice of audio cables can affect the results, to make the A-48 sound overly warm and lethargic. May not be a bad thing, given that you will get to tweak the sound to your liking through cables. Truth be told, I had the best results with a simple regular power cord and thin gauge speaker cables that brought out the true musical nature of the amplifier.

If you are looking for a final frontier amplifier that can live with you through the years, the Accuphase A-48 might fit the bill, given its timeless design, involving musicality, solid build, quality components and, best of all, proven capability and power reserves to drive difficult loads. Would I buy this amplifier? It’s a simple yes, resources permitting.