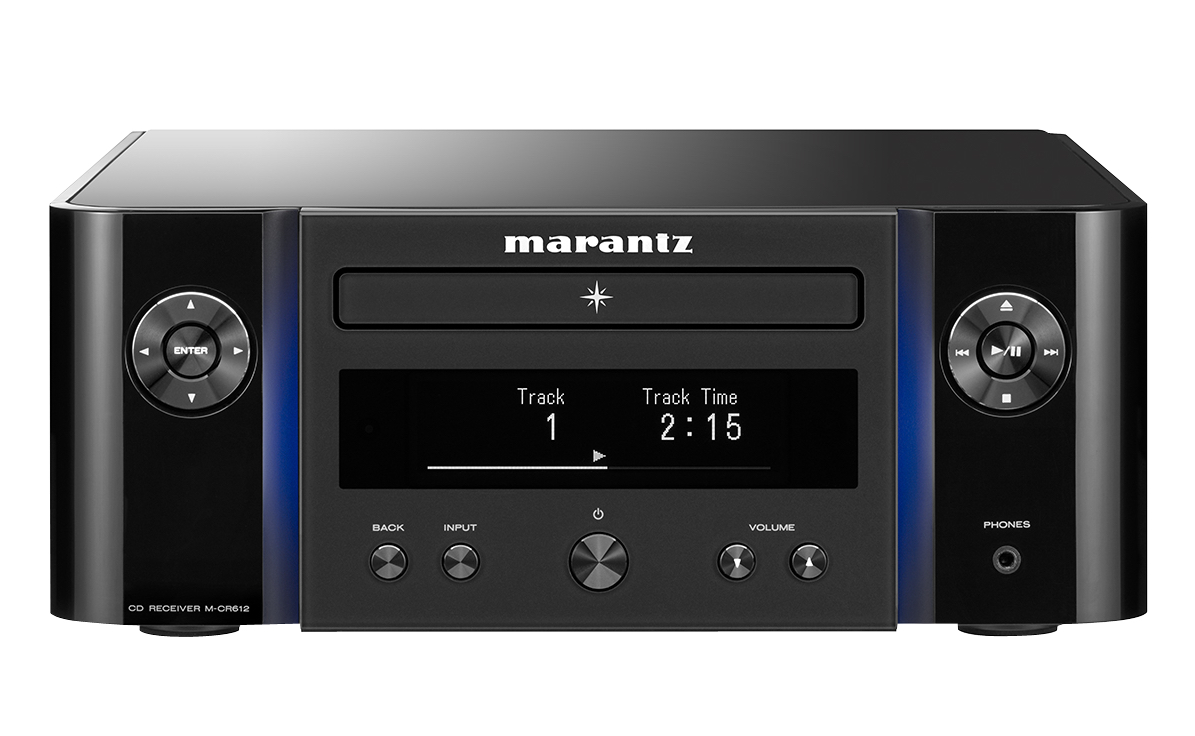 MARANTZ is no stranger to many of us in this hobby, or madness, depending on your point of view. Having been in the business for more than 65 years, the company knows a thing or two about making great-sounding, value-for-money hi-fi equipment. With such a long and rich audiophile history under its belt, the brand has managed to stay relevant in the digital age with its wireless music systems.

What we have here is its latest network CD receiver, the M-CR612. Known in some markets as the Melody X, this little system is an all-in-one streaming music system with built in Wi-Fi, amplifier and CD player. Measuring just 11 x 28 x 30 cm (h/w/d) and weighing at 3.4kg, it isn’t heavy to move around and is Ikea-shelf friendly due to its small footprint.

Styled in high-gloss black (also available in silver gold), fit and finish are good, but the entire housing is made of plastic with an acrylic top plate cover. Personally, it feels cheap – a metal housing would have given the whole thing a more premium feel as well as some weight.

The features available in the M-CR612 are region specific, so what is available for the Malaysian market include FM tuner, DAB+, TuneIn Internet radio, AirPlay 2 support, Spotify Connect, Tidal, Deezer and Home Entertainment Operating System (HEOS) Wi-Fi connectivity. For the uninitiated, HEOS is a wireless multi-room audio platform from Denon that is featured on selected wireless powered speakers, receivers/amps, and soundbars from the Denon and Marantz brands.

Bluetooth is included as well as Wi-Fi with 2.4GHz/5GHz dual band support too, and it supports all major audio file types – CD, WMA/MP3 (CD-R/RW), WAV/FLAC/ALAC 24-bit/192kHz, DSD 2.8MHz/5.6MHz tracks and gapless playback. The M-CR612 can also be used with Alexa, Google Assistant and Siri virtual assistants to control the system through their respective apps.

The front panel incorporates two vertical light panels (Marantz calls this accent lighting), which lights up white on either side of the three-line OLED display and can be turned on or off in the system settings. The OLED display is dimmable and can be switched off by the supplied remote control. Apart from the power button, there’s a standby indicator, cursor buttons for system function navigation, remote control sensor, control buttons for CD playback operation, input selector, volume and a 3.5mm headphone socket with dedicated gain settings.

SETTING UP
The M-CR612 has four channels of high-efficiency, low-distortion digital audio amplification. Power output is rated at 60W per channel x 2 (6 ohms) or 4 x 30W for dual speaker set-up with independent volume setting for each pair of speakers. Users can choose to drive a pair of speakers at a higher power output or a create a multi-room set up with two pairs of speakers but with power output halved. Bi-amping is available if the speakers are bi-wireable.

As I only had a pair of speakers to drive, I used the “Parallel BTL” amplifier mode which Marantz says, “realises sound quality with damping force.” The user manual states that speakers with an impedance of 4-16 ohms can be used. Marantz does not disclose much about the components used in the circuitry other than saying “the compact signal paths reduce distortion and improve sound” and that “premium passive and active components amplify precision sound and audio quality.”

The system software set-up includes digital tone control settings for bass, treble and balance. In this review, all tone controls were kept flat, and all inputs were set to “Source Direct” in the settings. I generally found set-up quite straight forward. The Marantz packaging features a QR code that had a clever reminder to prompt users to download the accompanying HEOS app, which I did on my Pixel 3 XL phone.

Once all connections are properly set, cables around the rear can feel a bit “clumped” as all the connectors are sited close to each other. I did feel the wired radio antennae was a bit of a downer as it’s literally a flexible cable wire that needs to be screwed on to the unit and then attached to a surface or something to keep it propped up. Aesthetically, it does not work for me. I use a wired LAN connection for streaming TIDAL and Internet radio and turned off Bluetooth and Wi-Fi functionality as Marantz says it can improve sound quality.

LISTENING
The unit was left to run in for a couple of weeks before I did any serious listening. My first impressions of the M-CR612’s sound was of a very clear and open midrange and fairly wide stereo separation. There were hints of sparkle in high frequencies but I did not find this consistent. The Elac B6.2 generally seemed quite happy being driven by the M-CR612 and on several occasions, I did up the volume to the 50 mark and could not detect any noticeable distortion. But pushing it beyond that did show constraints, especially a hardening of the sound.

When I jumped at the opportunity to review the M-CR612, I was primarily drawn to the CD player simply because I could not remember when I last played a CD from my collection. However, the features I ended up using more were Internet radio and the optical digital input to feed TV audio.

Internet Radio
With the Internet radio, sound quality was decent and generally enjoyable even though most feeds were low bit-rates in MP3 or AAC encoding. But what I found so likeable was the ability to access global radio stations – especially the likes of Singapore’s Gold 90.5 FM, Symphony 92.4 FM as well as London’s Jazz London Radio. These were stations I had frequently listened to many years ago and hearing them again brought a sense of nostalgia for me. For some reason, I just could not establish a connection with London’s Jazz FM even though the station was available. Radio stations can be searched by region, country or name – a nice feature.

HEOS App
To use the HEOS app, I needed to register for an account. Once signed in, I started linking up my streaming services such as TIDAL. The HEOS app in essence puts all your streaming services in one place and allows you to access those services from within the app. The downside to this approach is that I could not play back TIDAL Master tracks from the HEOS app. The app also allows input selection and basic track control for the CD player and tuner. If you have music files stored in your mobile device/tablet, the HEOS app can access them for playback. I personally preferred using the supplied remote control as it was a more tactile experience and gave full control of the M-CR612.

Netflix and TIDAL (via optical input from TV)
It’s a nifty feature that Marantz has included auto sensing for its optical inputs. Powering up the TV gets the M-CR612 powered up and ready for audio input. Audio and dialogue from Netflix shows are crisp, clear and well-articulated.

Switching to TIDAL on my TV, I listened to Heavy Cloud But No Rain and Seven Days (Ten Summoner’s Tales – Sting, 1993). The M-CR612 reproduces vocals and tonal characteristics of instruments accurately. Sting’s voice comes to the fore, clear and precise. However, the midrange has a strong forward presentation and everything else in the tracks sound like they are placed several rows behind.

Tame Impala’s Breathe Deeper has a busy mix and the Marantz did not do too well in separating the layers of the track. It sounded congested and the bass lacked bite and body. But on the track Stratosphere (Hyperspace – Beck, 2019), Beck’s lead vocals and psychedelic synths were reproduced with texture and definition. The track also showcased the M-CR612’s ability to reproduce space and scale in terms of width but not so much in height.

Up to now, I could tell that bass reproduction was not the M-CR612’s strong suit. Colors (Colors – Beck, 2017), for example, sounded underwhelming – bass grip and depth seemed all but absent throughout the track. With the Rega Elex, the whole piece gets a major lift. Bass lines, drum kicks… there’s just more meat and wholeness which I found missing with the M-CR612.

TIDAL HiFi (controlled via HEOS app)
Unlike the TV, streaming TIDAL from the HEOS app on mobile sounded noticeably different. Instrumentation generally had more presence and air. The Marantz presented Brian Bromberg’s soaring piccolo bass lines and melody on Choices (Choices – Brian Bromberg, 2004) in a forward manner that made the guitar feel separated from the rest of the instrument mix on the track.

Jeff Lorber’s piano is also brought to the fore on By My Side (Flipside – Jeff Lorber, 2005), again showing that the M-CR612 sound seems to be a little heavy-handed on the mids, leaving the rest of the frequency range taking a back seat.

Gwilym Simcock’s My One And Only Love (Perception – Gwilm Simcock, 2007) is a track I’m familiar with because of its lush, airy and emotive expression but through the M-CR612, I did not hear this. The whole audio spectrum felt restrained – with the audience sounding like it has been tucked away all the way back of the venue. Up to now, no matter what I fed the M-CR612 with, I keep craving for drive and bite, and on several occasions, the M-CR612 lets me think it was coming up but then just fell short. But I still had one more feature to try out on the Marantz.

CD player
Armed with several CDs from my collection, I decided to do an A-B comparison between CD and TIDAL with Ten Summoner’s Tales. The same tracks – Heavy Cloud But No Rain and Seven Days – this time sounded airier and more refined. Even bass notes sounded more pronounced and authoritative.

On the track Tight (Nightmoves – Kurt Elling, 2007), the M-CR612 exhibited grip, energy and drive in portraying the crooner’s vocals unlike what I had heard so far. Another track from the same album – And We Will Fly – features a bridge with melodious harmonica solo and the M-CR612 rendered that segment with lovely texture and presence.

This is probably the highlight of this compact streaming system. In terms of sound quality, I would rate the CD player section of the M-CR612 to be much superior compared with its streaming capability. I should add that the CD drive operated smoothly and the tray felt sturdy. I could not detect any noticeable noise from the CD mechanism while in use.

THE LAST WORD
There’s no doubt that the M-CR612 is feature-rich and easy to use. Plus, it also gets Internet updates directly from Marantz, which is a benefit to ownership. During the review period, the system received two updates, which took about 15 minutes each to complete.

The M-CR612 has an open and wide midrange, but one I feel sounds more pronounced than it should be. I would describe the overall sound performance as laidback and relaxed – which is no bad thing for some.

The Marantz M-CR612 is an appealing proposition if you’re looking for a space saving, all-in-one network CD receiver system that won’t leave your wallet dry. If excitement and drive is your thing, perhaps the Naim Uniti Atom or NAD M10 might just do the trick… but be prepared to fork out more than double the price of the M-CR612.