IT has been a while since I had a tube amplifier running in my system. Yes, my CD player runs on a couple of tubes, but that’s about it. The last time I had a tube preamp, power amp or integrated at home must have been half-dozen-years ago.

Not that I don’t like tubes, quite the contrary… but I made a decision to keep my hi-fi system as “green” as I could, and stuck to it. But… audiophiles have the itchiest fingers… in recent months, I began to feel the urge to listen to a tube amp again, if just for a while.

Leben is  a Japanese manufacturer whose products – all tube-driven – have received quite a loyal following over the years. One look at the CS600 integrated amplifier, or any other amp in the Leben stables, explains why the company has struck a chord with a section of the audiophile community. This amp may be getting a bit long in the tooth, but it certainly is no less relevant today for audiophiles seeking the tubed path to audio nirvana.

BITS AND PARTS: One of the advantages of a tube amp is that it can be designed to operate with different types of tubes. This push-pull design comes with 6L6GC (5881) power tubes as standard but there’s an option for  6CA7 (EL34) output tubes to be fitted as well.

Two toggle switches can be seen inside the casing, accessible via the vent on top of the amp. An LED indicator shows the mode, for plate voltage and cathode resistor, whatever your choice of tube. The 6L6 mode outputs 32 watts per channel, but if you replace them with EL34s, it 28 watts… not significantly less power, but more a difference in sonic attributes.

Twin-triode 6CS7 tubes are used in the first-stage amplification, while a 6CJ3 damper tube delays high-voltage supply to the output tubes to prevent damage and extend their life.

Leben claims a wide-range, flat frequency response, from 10Hz to 100kHz. Inside the amp is a heavy-duty output transformer spec’d for “50W grade amplifiers”, and there’s also a large-capacity 5H350mA choke-coil.

On the rear, located above the speaker terminals, is a selector for taps of 4/6/8/16 ohms, allowing for matches with a wide range of speakers. The terminals are WBT-type. The CS600 is equipped with five line-level RCA inputs, a tape monitor and a preamp-in that lets you use it as a power amp (only the volume control, which is in 40 steps, can be operated in this mode).

At the front, you get a bass boost switch, headphones output, speaker/headphones selector switch, mute, tape monitor and a stereo/reverse switch (I couldn’t quite figure this out as the manual wasn’t available). All the knobs are 24K gold-plated.

Accenting the green-gold livery of the fascia are wood cheeks, made of solid Canadian white ash. The amp weights a substantial 22.5kg and measures 450 x 360 x 142mm (w/d/h). A detachable power cord is provided. 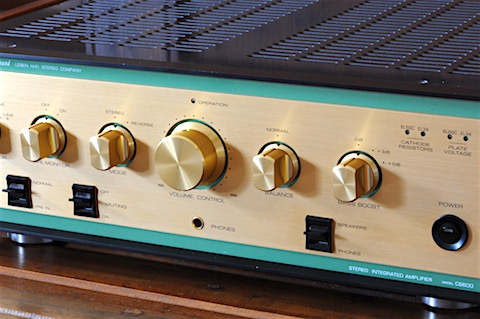 IN CONCERT: Curious to know how a tube amp with a modest output would pair with a pair of Maggies, I first hooked the CS600 to the MG.7… and was surprised how the Leben handled the panels without showing any reluctance. Of course, I wasn’t going to push up the decibels, just at my normal listening level. On the Rega and Odyssey, this entailed the volume at around the 10 o’clock position… the Leben had to be set at around its halfway mark or slightly past that for roughly the same loudness level.

This is not the sort of tube amp that looks at all things with rose-tinted glasses… yes, there’s a bit of warmth and a touch of smoothness in the midrange, and the treble is silky, and extended, never harsh unless pushed. But I knew better than to drive the speakers to headbanging levels – most of the time, at the volume I was running the CS600 with the Maggies, I didn’t have to drive the speakers too hard.

It’s in the bass areas that the Leben shows some “softness”… it wasn’t as dynamic and punchy as the solid-state amps in my set-up, but this is to be expected of most tube amps. Even with easier-to-drive speakers like the PSB B1, the Leben showed its tube attributes in this area.

While the overall sonic can be dynamic and “exciting” with the right recordings, the bass is a giveaway… smooth and detailed, but not as taut or muscular, unlike with the Rega Elex-R. Those with a preference for acoustic/classical recordings, however, will delight in the more organic texture to the upright bass and/or cellos that take them a bit closer to the instruments’ timbre. 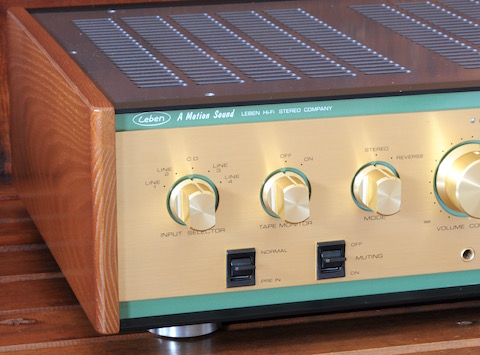 Not surprising for its Japanese origins, the CS600 exhibits a partiality for such music, from vocals to acoustic instruments… not that it won’t work well with others, but rock fans will certainly be asking for a bit more bite and slam.

This apart, the CS600 lends a lot of weight, detail and solidity to the music… it won’t gloss over shortcomings in the recordings, but renders them less unpleasant than in solid-state systems. These 6L6GCs (Russian tubes, I believe) can sound a bit harsh and bright when new – fortunately, the review unit had seen quite a few hours under its belt.

A word about the headphones output – it sounds sweet and non-fatiguing with a variety of cans I used, and if you’re likely to also spend a significant amount of time with these wrapped around your ears, the Leben will do away with the need for standalone head amp. 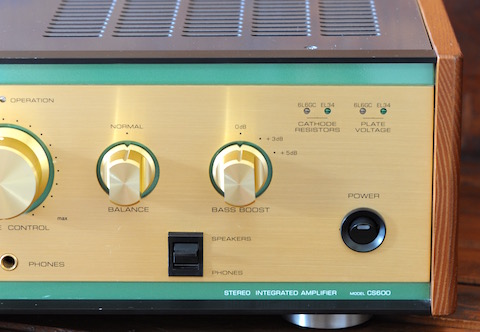 APPLAUSE: The retro chic design oozes class and “classic”, and the build quality is impressive, while tube rollers will appreciate the options. This amp seems capable of matching a good variety of speakers as well, unless you like your music loud and brash. The smooth tonality and faithful timbres make it consummately communicative.

BUT…: Gets hot like all tubes amps do, and the bass will need the right kind of speakers and music to elicit the best.

FINALE: Here’s a well-designed amp for those that want to take a big step up from the plethora of cheap tube amps from China but can’t or won’t splurge on esoterica. If I were to call the Leben CS600 a bread-and-butter tube integrated amp… well, it would be top-notch bread and butter!