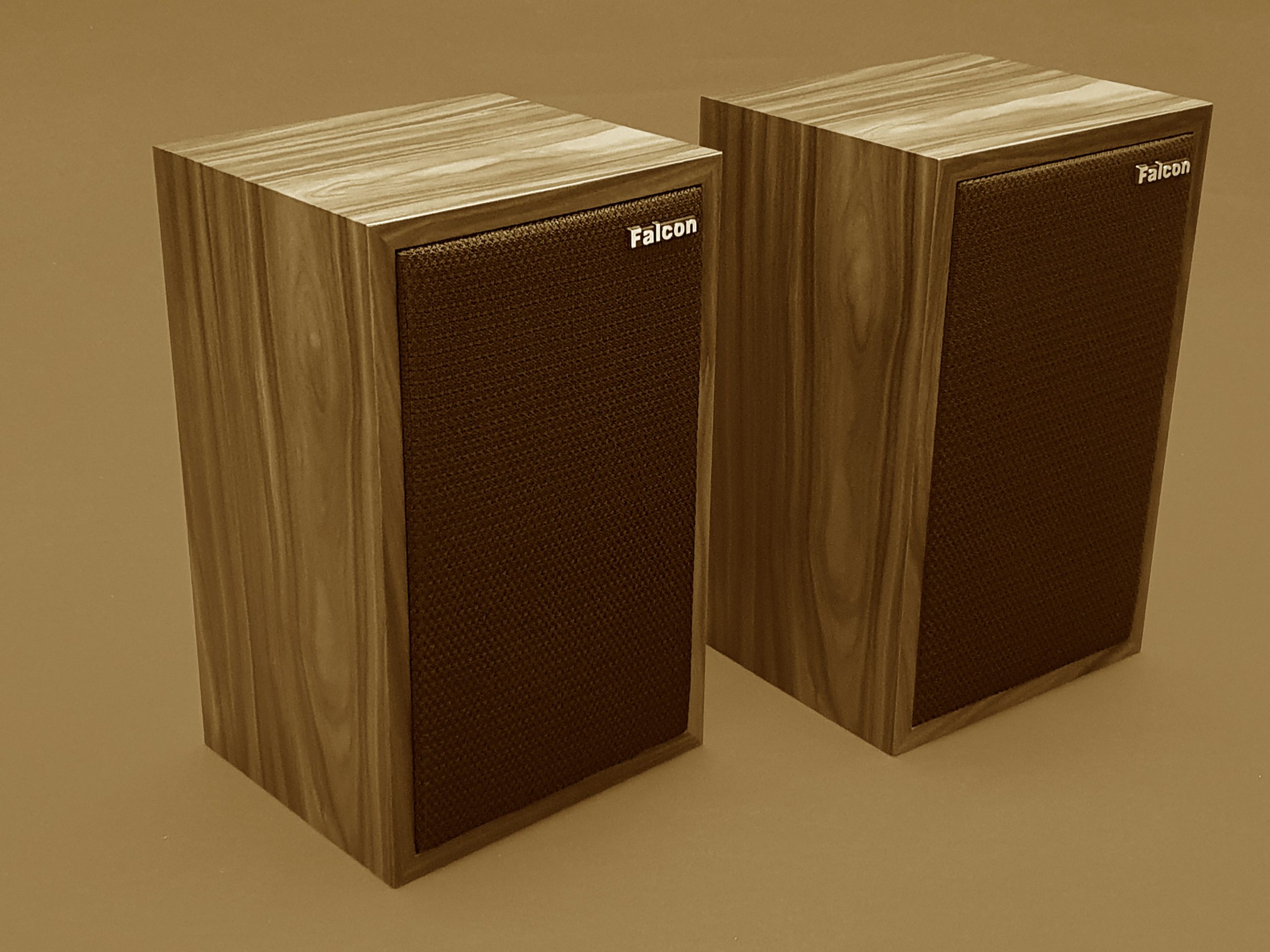 + All the strengths of the hallowed LS3/5as exemplified – superb midrange, pinpoint imaging, good depth and dimensionality which belies its size; negates most of the “lumpy” mid-upper bass response of lesser LS3/5as; Gold Badge edition offers even better resolution in the midrange and smoother treble extension; available in lovely real wood veneers which can complement an appropriate decor.
– Cannot handle bass heavy music – bass/mid driver excursion is limited by modern standards; can benefit from a hi-fi subwoofer which expands the stage and thus can offer more aural density in the imaging; requires careful matching with amplification to realise all of its strengths.
Sound: 8/10
Value: 7/10

AS an owner of two pairs of LS3/5as, it was almost a foregone conclusion that I would volunteer to review these speakers. My own pairs of LS3/5as are an older 11-ohm Harbeth model from the 1980s and a more modern three-year-old pair of 15-ohm Falcon Acoustics Silver Badge model. With these two reference points available to me, it was an exciting prospect to see if the crossover modifications of the Gold Badge Edition would be obvious.

I won’t take up too many column inches retelling the storied and fabled origins of these (in)famous LS3/5as except to point to the fact that the Falcon Acoustics are probably the most meticulous recreations of the original model, given that one of the founders of the company, Malcolm Jones, was the KEF engineer who designed the B110 and T27 drive units which constitute the LS3/5a. But the attention to detail doesn’t stop there, with particular attention paid to the construction of the thin-walled bitumen-damped cabinets and also the crossovers, to come as close as possible to the original specification.

These Gold Badge editions were introduced some months ago in Malaysia, and this event was covered for this site. The Gold Badge promises to hew even closer to the original BBC specification through judicious revision of the FL6/23 crossovers – most notably, inductors which have a higher tolerance for saturation and new capacitors that are closer in spec to the original Kingwood Warren models.

For those who want more detail on the history and the follower-ship that this little speaker elicits, I would refer you to the many articles written about Jo Ki – he is arguably one of the foremost authorities on this speaker and has many pairs of them in his collection. He also is an authority on how to set them up for optimal performance – though what has been now dubbed “the Jo Ki method”.

TESTING
Knowing from my own experience that amplification matters with LS3/5as, more than most speakers, I narrowed my choice of partnering equipment to two amps which I knew would show them off to their best in my systems. This was a Naim Uniti Atom streaming amplifier as well as a venerable Pioneer A-400. Knowing that there are many others out there who partner these speakers with amplification in the tens of thousands of US dollars range, it would seem overly modest to use such amplification, but I have found that these two amps have what it takes – and can beat even the likes of an Accuphase in notable ways.

I also tested these LS3/5as in the dual pair set up with my own Falcon Acoustics LS3/5as (albeit the older Silver Badge editions) on top of each other, inverted driven in parallel by the amplification. This setup has been promoted by Hi Fi News and Record Review‘s Ken Kessler, on the behest of the legendary hi-fi designer, the late Tim de Paravacini.

Sources included a Bluesound Node 2 as a streaming source with a Chord Electronics Hugo2 DAC, as well as the internal streaming module in the Naim Uniti Atom. Both were principally driven by my resident Roon set-up.

Most of the listening was done with the Pioneer A-400, so most of the notes refer to this set-up, with the Bluesound as the streamer and Chord Hugo2 DAC.

I set them up on metal 36-inch stands with a pair of ISOAcoustics ISO-155s underneath each of the speakers, about three metres apart, 3.5 m away, with no toe-in. Experience tells me that although they are sealed boxes, they perform better in a free-space positioning, with boundaries at least a metre away from the rear and sides.

LISTENING
I kicked off not with music but with a CD rip of the Hitchhiker’s Guide to the Galaxy radio play – which was very likely monitored or mastered on LS3/5as at the BBC’s Radiophonic Workshop. At once, the traditional strengths of the LS3/5as in rendering vocals was evident – with a very even-handed, full-bodied and sonorous quality to spoken voice. The production and sound effects were superbly enjoyable – “share and enjoy” indeed.

Switching gears to Melody Gardot’s recent release of vocal jazz entitled Sunset in the Blue (Tidal MQA stream), her voice was palpable, with the lush instrumentation as the backdrop. This genre shows off many of the strengths of LS3/5as – acoustic music with vocals showing off the superlative midrange. On a separate note, this is a superb album is now available on all the major streaming services.

Onwards then to my standard retinue of test tracks – first was Heartplay with Charlie Haden and Antonio Forcione on double bass and guitar respectively (24/192 HDtracks FLAC). The soundstage with both instruments was nicely rendered, with “space” between them. The double bass sounded full, though not as deep as you might want. One of the previous shortcomings of the LS3/5a was a purposefully engineered mid-upper bass hump which purportedly was to give the speaker the illusion of deeper and fuller bass, at the expense of some bass speed and texturing. This can be negated to a large part with careful choice of amplification. This is where the Pioneer A-400 shows its strengths – its fast but slightly lean bass plays well against the LS3/5as bass bump.

In this regard, the Falcon Acoustics LS3/5as, in my estimation, have the best controlled renditions of this bump, and with a good amplifier, this is not a significant issue at all.

Next up was another vocal track, but this time not acoustic per se – London Grammar’s Wild Eyed on Truth is a Beautiful Thing (24/44.1 HDtracks FLAC) is a great test of how speakers handle bass whilst rendering the luminous vocals of Hannah Reid over the thunderous bass lines. The vocals were handled with aplomb, and the rising synths and strings are superb, winding around her voice. However, the bass was not as full as intended, which took away from the entire picture a little.

I then switched to some orchestral music – this time the newly released Deutsche Grammophon recording of the Vienna Philharmonic conducted by John Williams and featuring Anne Sophie-Mutter on solo violin – John Williams in Vienna (TIDAL MQA stream). This recording of some of his most iconic film scores is a total crowd pleaser, with a world class orchestra and is a superb modern orchestral recording. On the last track, Raider’s March, the LS3/5as painted a superbly precise, wide and deep soundstage with the orchestra laid out neatly, with the soloist flying over this lovely backdrop. The textures of the orchestra are evident, with the blare of the brass and the woodwinds evident even when playing en masse.

Last port of call was Dire Straits’ Telegraph Road on Love Over Gold (DSD64 rip from SACD). The spacious soundstage with good dimensionality was evident, but again the bass was not quite up to the mark. Rhythms were well-handled, though this is very dependent on the right amp – one such as the Naim Uniti Atom does justice to this department.

vs Falcon Acoustics Silver Badge LS3/5as
Switching back and forth from my own Silver Badge LS3/5as, the difference isn’t as large as some might have led you to believe. The key differences lie in a tighter bass, with better bass textures, and thus, a better ability to “time” with rhythms. This comes in hand with a more open midrange and therefore a freer sounding treble. It’s a subtle difference, but real and easily perceived. This got me to think seriously about investing in a crossover upgrade for my own LS3/5as!

With a REL Acoustics T5 subwoofer
Once again, experience has taught me that a well integrated subwoofer can also do wonders for the LS3/5a. Pressing my trusty small but potent REL Acoustics T5 Subwoofer wired using the high-level inputs (the preferred way for music applications) and repeating the listening once again to the same tracks, the subwoofer made an incredible improvement to the solidity of the soundstage and also made the dimensionality larger. The soundstage and the volume of the instruments and voices became even more palpable and sizeable. I heartily recommend this route even if you are not a bass focused listener, as the improvements are really felt not heard.

In a double configuration per Ken Kessler’s suggestion
This is likely one of the most usurious (and some might say silly) ways to improve the performance of LS3/5a – for the price of two pairs of Falcon Acoustics speakers, one can opt for all manner of speakers whether be they floorstanding dynamic speakers, electrostatic or planar magnetic which all can claim better performance in many other ways.

However, if you like the “sound” of the LS3/5as, this configuration gives more of all that may offer. And in addition, deeper and more real bass, even larger dimensionality – especially height of the soundfield as well as the ability to go louder without distortion (or the bass cones bottoming out, which they can do so easily on bass heavy tracks in a single-pair formation).

I have had this configuration in service with my Harbeths for quite some time and thoroughly enjoyed them, and this double pairing with the Falcons was even more enjoyable – the similar profiles of these two pairs, coupled with more modern build and likely better quality control make for a superbly cohesive soundfield.

CONCLUSION
The Falcon Acoustics Gold Badge LS3/5as represent the pinnacle of this design (save one-off or limited editions e.g. the Kingswood Warren edition), and as such they are a superb pair of small speakers. But they come with a few caveats, even from a fan such as myself – they’re not suitable for bass-heavy music, must be matched well to your amplification and last but not least, you must enjoy the classic “BBC monitor” sound.

As such, perhaps not an unconditional recommendation, but one that could well be a match made in heaven if auditioned carefully.