Streaming for audiophiles… better sound on a modest budget 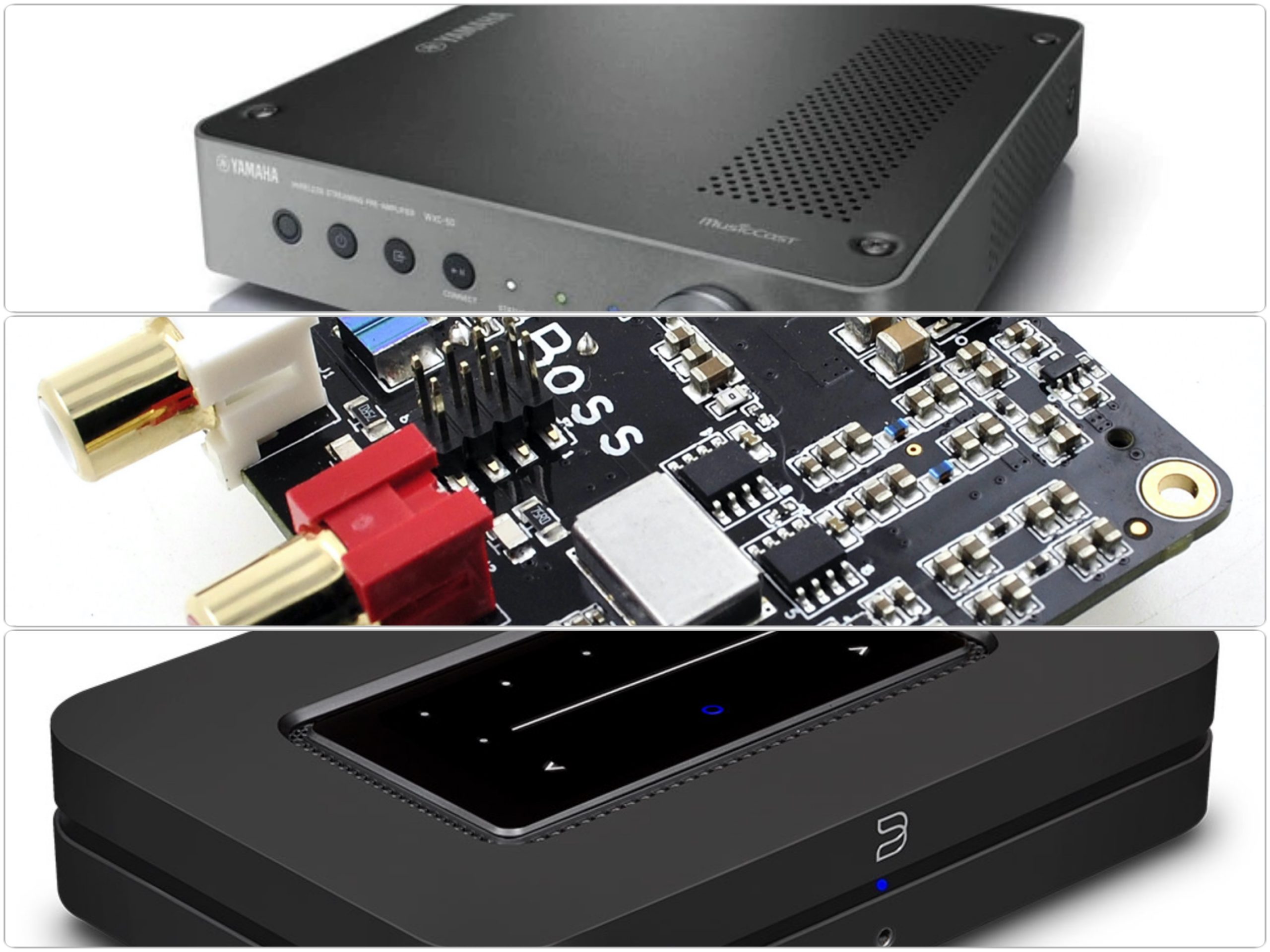 SO for the past two instalments, we have been dealing with the basics for a simple, cheap and DIY-esque approach to streaming. In this instalment, we will be looking to continue on the same theme, to level up the PC as a source with an external USB DAC. This set-up will be pitted against a few budget plug-and-play(-ish) all-in-one box solutions – the Raspberry Pi/Allo DAC combo, the Yamaha WXC-50 and the Bluesound Node 2i.

Raspberry Pi/Allo DAC
Confession time, this is less of a plug-and-play simple one-box solution but due to the relatively small outlay, this option is considered. For the uninitiated, a Raspberry Pi is a small, low cost, credit card sized computer. There are various versions of the Pi, the latest being a Pi4 which has onboard Wi-Fi, Bluetooth 5, Ethernet and USB 2.0 ports, and is powered via USB-C. On its own, it’s just a simple computer but what brings it into audiophile territory is the ability to stream out via USB and be connected to various third party DAC boards. The DAC used here is an Allo Boss HAT (Hardware attached on top) that plugs onto the main Pi board. It is based on a PCM5122 chip capable of decoding signals up to 32bit/384kHz resolution. There are various other makers of HAT DAC boards. Another popular one is by Hifiberry. There are also generic ones from China that cost less than RM100.

A Pi board itself costs about RM200-350 bare. The Allo DAC costs about RM250. This combination with the DIY box will set you back about RM600. Then you will need an operating system. Here, we are using the open sourced based Volumio. The software is about €30 per year or about €200 for a lifetime licence. Volumio has native integration with Tidal and Quboz as well as Spotify via plug-in. The interface is simple and slick without the bells and whistles of Roon. It can also act as your music library manager and can also be a Roon endpoint. The control will be via phone or tablet.

For a simple black box with no display (although you have the option to hook it up to a monitor), the Pi box does sound very good. It is a huge step up if compared with the bog standard PC or phone option – expansive sound stage with clean sounding highs and decent low end. If there’s a criticism, it would be that it can sound a little cold and “digital”. When compared with a trusty Quad CD66, the Pi/Allo DAC betters it in terms of dynamics and pace but loses out in midrange warmth and bass. Still, quite remarkable for an investment of less than RM1,000. On top of that, you can also add an external DAC to the Pi via USB. If you need a DAC via coaxial or SPDIF, another HAT will be needed.

The downside is that it looks really DIY and it requires you to tinker. You will need to install the software on your own via a microSD card. It takes time and effort but it does pay off at the end. Having said that, for those who care about aesthetics, are somewhat technically challenged or who lack patience, you are better off leaving this alone. If you still want to have a Pi-based setup that works out of the box, the Project S2 Streamer (which does not come with a DAC HAT board but comes with some magic dust added for better signal output) can be had for about RM3,500.

Yamaha WXC-50
This is one of the cheapest plug-and-play all-in-one streamers available in the market. For about RM1,800, you get a well-built slim unit that can also act as a preamp to add into your pre-existing system. Don’t be fooled by the low price, this is one very well-equipped solution. It has all the inputs that you need, is easy to set up, is compatible with all hi-res files, natively connects to Tidal, Deezer and Spotify, and also allows connection via Bluetooth and Airplay.

The WXC-50 comes with two DAC chips, a DSD-capable ESS Sabre ESS9006 and PCM Burr Brown PCM5101A. It is controlled via Yamaha’s MusicCast app and with other MusicCast amplifiers, speakers, it becomes a multi-room solution. There is also the WXA-50 which shares the same compact casing but has a built in 55W @ 8 ohms Class D amplifier for an extra RM200.

So in terms of value for money, connectivity, flexibility and to an extent, being future-proof, this Yamaha ticks all the boxes. When dealing with streaming services, the app sends the signal at 44.1kHz. It does not unfold MQA natively. However, for hi-res digital files, it plays at the resolution of the recording without a hitch.

Sound quality is good for the price. Music is projected in a bold and strong fashion. Rhythm and timing are good, with sufficient low end to keep things moving along spritely. Faith by Lake Street Drive on Tidal sounded foot-tappingly happy with good imaging and detail.

The, Yamaha, however lacks pinpoint stereo imaging and the sound signature veers towards the cold and clinical end of the spectrum. It carries the burden of the general criticism of digital music – the edginess and glassy glare are present. Nevertheless, you have the option to connect an external DAC to the Yamaha.

The biggest downside is the app. It can be sluggish. To be fair, Volumio can also be sluggish at times but it is constantly being improved by the open source community. It is also used by other manufacturers. However, the Yamaha MusicCast app is proprietary to Yamaha. So you will be reliant solely on Yamaha for any improvements or updates, with no tinkering nor plug-ins opportunities to improve it.

Bluesound Node 2i
This is another plug-and-play all-in-one box solution similar to the Yamaha. The Node 2i costs about RM1,000 more than the Yamaha. It is similar in terms of inputs and versatility, packed in a classy looking black or white box with a single LED and somewhat useless controls on the top. The unit is controlled via its app from the phone or tablet. It also comes integrated with Tidal, Spotify, Qobuz, Deezer and Amazon HD, to name a few.

The Node 2i boasts a 1GHz Arm Cortex A9 processor and a 32-bit/192kHz DAC. It does not specify what chip is being utilised but it has been speculated out there that it is a Burr-Brown chip being utilised with full MQA capabilities.

Compared to the Yamaha, in addition to the full MQA compatibility, the Node 2i also supports a wider range of streaming services. The operating system called BlueOS is also used by other manufacturers in their streamers, the main one being NAD. Speaking of BlueOS and the App, it is very slick and user friendly. Compared to the MusicCast app, this is more polished and responsive.

Sound quality wise, the Node 2i is a tad warmer with added richness in the midrange. It sounds less forward with more refinement. The designers seemed to have worked harder in removing the perceived cold signature of digital sound. But the best “upgrade” with the Node2i, compared with the Pi/Allo and Yamaha, is the software. It’s slicker, faster and more intuitive. It feels more complete if compared with the somewhat DIY feel of the Volumio, and is much prettier and better put together compared with the MusicCast. Also unlike the other two, it does MQA natively. Apart from the sound quality, the Node2i would come tops just for BlueOS.

Laptop and External DAC
Circling back to the laptop option and as previously hinted, the USB output is an added advantage. Both the Yamaha and Node2i do not output data via USB, hence you are only limited to adding a DAC via coaxial or SPDIF. For the Node2i, even if you were to add a DAC which is MQA compatible, very few DACs can unfold MQA via coaxial or SPDIF. The Pi box can output via USB but it will need a little bit of tinkering to do so and still lacks the full MQA unfolding capabilities.

Plugging a DAC to the laptop via USB is dead easy. Using a RM1,800 MQA compatible SMSL Su-9 is as simple as plugging a mouse via USB. The laptop detects the DAC, and either Roon or Audirvana immediately recognises it.

In terms of sound quality, it is a clear winner against all the previous options discussed before. The soundstage is noticeably bigger with much better high frequencies and bass extension. Playing the MQA version of If You Got A Problem by Joy Oladokun brought out more detail and gave a better insight to the emotive raspiness of her voice. This was missing in the all-in-one boxes above. Against the old Quad CD66, the improvement is also discernible. The detail retrieval and bottom-end punch are in a different league.

This set-up is not only cost-effective, it is also quite future-proof. As far as hardware is concerned, an upgrade or a change of DAC is easy and relatively low-cost with the flood of China-based manufacturers. The names SMSL, Topping, Denafrips and Audio-GD are now becoming household names in the hi-fi world. DACs are getting cheaper and no longer the domain of the ultra high-end.

On the software front, you will not be stuck with manufacturer-based software which may face support issues after a few years. Roon and Audirvana are on a subscription model and constantly being improved. In other words, you will unlikely miss out on the next best thing on the digital front.

So for a budget outlay of around RM3,000, the laptop plus DAC combination is not only better sonically, it is very future-proof in terms of hardware and software. The only downside is that it needs some investment of time in setting up. Not as much technical tinkering as there is with the Pi box but a smidgen more effort than a simple plug-and-play one-box solution. Beyond this, for more money, there are various options from the big audio players such as Cambridge Audio, NAD, Auralic and Naim to name a few.

Streaming for audiophiles… a primer

Shaikh S. cultivated a love for music at an early age but his lack of talent killed any ambition to be a rock god. The hi-fi journey started during his student years in the UK in the early 1990s when he stumbled across an old copy of What Hi-Fi magazine. From that day, his fate was sealed, with all extra bits of money going to music and hi-fi. The interest turned to an obsessive passion with a humble Aiwa XC300 CD player, Rotel 920AX amplifier and Mission 760i speakers. This continued when he returned to Malaysia to start his legal career. He also became a contributing reviewer for a magazine. Life then put pause to the passion. Now middle-aged with big kids, he can afford time to attend concerts, listen to music and continue dreaming of being a rock god.