PS Audio – staying true to the high-value cause 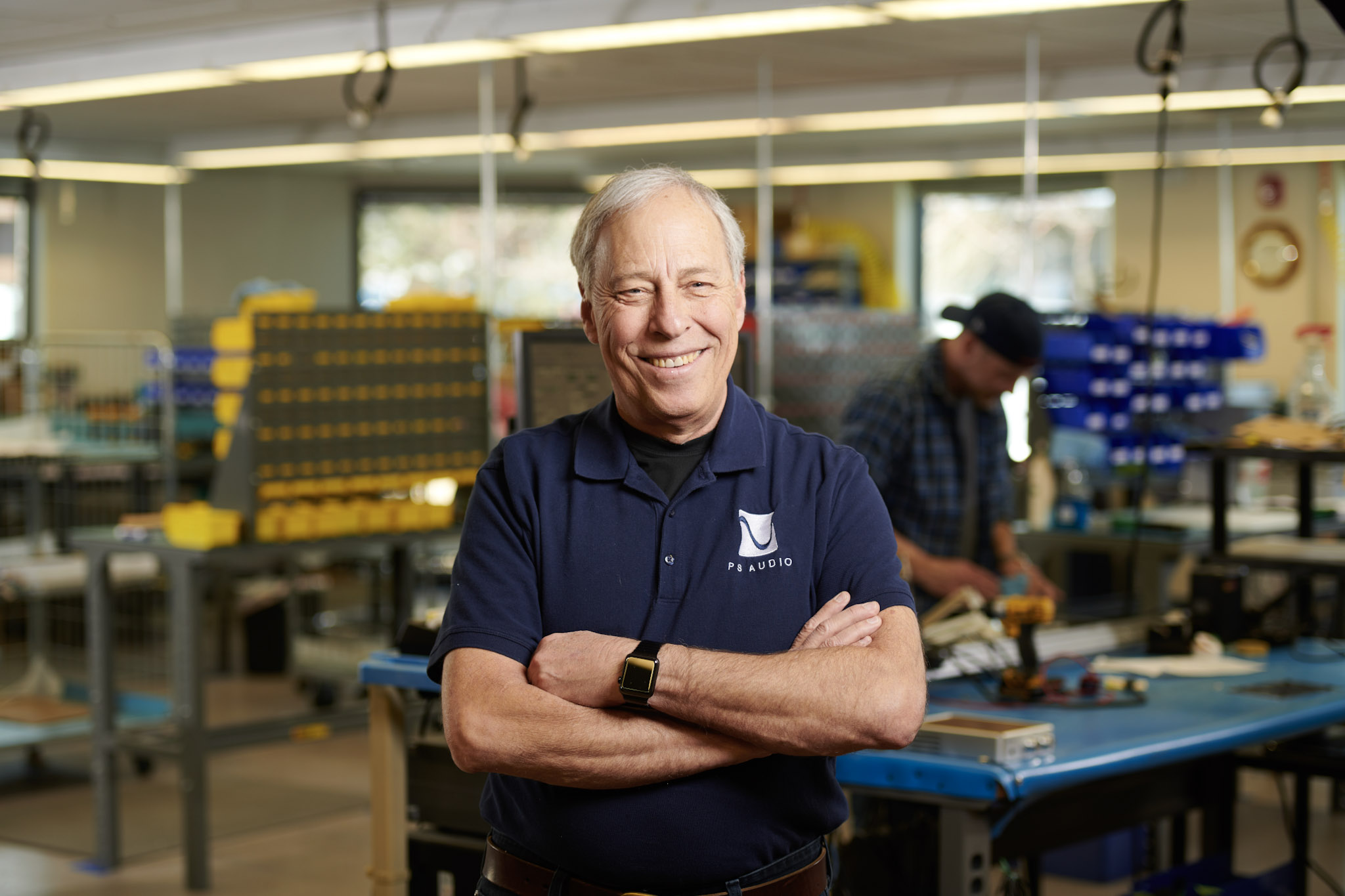 THE PS Audio story could have been just another footnote in the pages of hi-fi history. Founded in the early 1970s, it adapted to the digital wave of the late 1980s before ceasing operations in the late 1990s. Fortunately, the story didn’t ended there.

The company, founded by Paul McGowan and Stan Warren (thus, “PS”) in 1973, shipped its first product, the now legendary “cigar box” Phono Preamplifier a year later. It cost a shade under US$60 and set a price-performance benchmark that the company maintains to this day – high-end without the associated price.

By 1990, though, both founders had left the company. Its new owners did turn out a range of well-received digital products, but PS Audio ran into troubled waters financially and shut down in 1997. McGowan, who had joined Infinity Systems to design loudspeakers, then stepped in to buy back the PS Audio name and take the company to its next phase. He remains its CEO and main designer to this day.

During the early years, PS Audio went with the flow, reflecting the zeitgeist… after the phono preamp came line preamplifiers and power amplifiers, and in the late 1980s and the 1990s, DACs and CD players. When McGowan revived PS Audio, he decided that he needed to set out in a new direction to keep the company competitive, and turned his attention to the AC power that fed hi-fi systems. Thus, was the AC regenerator born.

Unlike other AC products till then that were power line filters/cleaners, the regenerator was in essence a massive power amplifier that output voltage after addressing the issues of current fluctuation and sine wave purity at its input. The legendary Power Plant P300 was the first of this design, and PS Audio continued to build on its success over the next 15 years with more powerful and effective AC regenerators (now with the Direct Stream prefix that’s also used for its DACs).

Along the way, the company has continued to offer amplifiers, digital players/DACs and other accessories, including cable and power outlets. In more recent years, the company has garnered much attention with its Bluetooth-equipped Sprout integrated/head amp, and for its collaboration with veteran hi-fi designer Bascom H. King for the BHK Signature amplifiers.

While PS Audio was already known for its high-value products, 2017 saw the launch of the Stellar range, which aimed to bring high-end performance at even more affordable prices. And adding another dimension to the PS Audio profile was the prototype of its first loudspeaker, first shown publicly in 2018. It was the final work of the late Arnie Nudell, founder of Infinity Systems and Genesis Technologies, who had mentored McGowan back in the 1990s. That project has yet to emerge out of the production line, and no doubt, the Covid-19 pandemic has been temporary setback to plans.

The company, based in Boulder, Colorado, now employs more that 50 people at its facility. Most of the manufacturing is done there.

McGowan is quite likely the busiest communicator in the hi-fi business – he sends out daily Paul’s Post missives via email, uploads regular Ask Paul videos on YouTube and helps send out a monthly newsletter called Copper. Fortunately, he found time to respond to our email Q&A.

How have the events of 2020 – well, Covid-19 – impacted PS Audio’s business overall? What was the last product PS Audio launched?

The last product we launched was the PerfectWave SACD Transport, or PST for short. This amazing new transport really breaks a few barriers and establishes a few milestones. First, as a standalone transport, it has been crafted around the D and M SACD drive (D and M owns Marantz and Denon). A beautiful all-metal drive. But what really makes this unit unique is how its output stage handles the digital audio data.

Instead of a buffering or re-clocking circuit as we have done in the past, we have completely re-architected the way digital audio bits are accumulated, organised, and output, addressing the age-old problem of jitter and noise in a fresh new approach. Recognising the only way to eliminate digital audio and power supply noise is to completely isolate the output stage from any internal physical or electrical connection, we have devised a galvanic isolation board that completely eliminates the problem of induced noise and jitter.

The PST’s output Digital Lens lives on a physically isolated PCB connected to the transport electronics by means of radio frequencies only. No ground, power supply, or signal connections are made. Total galvanic isolation. Remarkable.

This was a tough product to get out because of the pandemic. Beginning in March, 2020, we assigned the engineering team to stop work on product development and focus their efforts at making it possible for our 50 team members to work remotely. Within two weeks, they crafted an entire secure VPN system and got it installed and running in our team member’s homes. Before state isolation mandates went into effect, the entire engineering, sales, purchasing, planning, customer service, and admin teams at PS Audio were working from home.

By the time state mandates were in place, we were up and running and back at full capacity. To date, we’ve not had to lay off one person, we’ve managed to nearly stay at the same business level as 2019, and 2021 looks to be a growth year for us.

What progress has been made with the PS Audio speakers?

Our engineer, Chris Brunhaver, has made some terrific progress in spite of the major hurdles he’s had to face. First, we’ve now changed the industrial design of the speaker four times. For attempts 1 through 3, we relied upon our in-house industrial design team who got us close, but didn’t hit it out of the park. For the fourth and final design, we’re going to the market with, we hired a famous industrial design team out of Canada. Miles Hammond and his team worked with our designers and engineers over about a six-month period to come up with what I believe is an iconic and beautiful design that will serve the entire line of speakers. We’re now in prototype stage and expect to see the beta launch of the FR30 sometime in June. The 30 is our US$15,000 per pair model. Following the 30’s introduction, we’ll launch two models below the 30 in price, by October of 2021.

Why speakers, when PS Audio’s forte over the decades has been electronics and power products?

Our mission has been since day one to create an end-to-end musical experience for our community. While we’ve focused over the last 45 years on electronics, it’s always been problematic when asked what to pair our electronics with. There are lots of great speakers but to be honest, none I feel super good about recommending. It’s why I still use a 30-year-old pair of Infinity IRSV as the PS Audio reference system. There’s just not that many GREAT speakers out there. We intend to fix that shortage.

Our end-to-end mission is also the reason we’ve started our own record label and building our own recording and mastering studio. Octave Records is an important part of our game plan to make sure great music and recordings stay available and alive.

You send out a Paul’s Post email daily to your followers without fail. How do you find topics to tap into on such a regular basis?

It’s a mystery to me. They just pop in my head. Much of it is practice, just committing to doing something every day of your life. It’s challenging, but often when I stare at the blank page, something pops into my head. Sometimes a reader will be waxing on about something and that’ll spark an idea.

Are all PS Audio products manufactured in Boulder now? What about the internal components, do you source them from the US or globally?

All our products except Sprout and our Dectet power strip are manufactured in Boulder. The upcoming line of speakers will be manufactured overseas, likely in China. Sourcing is difficult but we try and stay local whenever we can. All our PCBs, metal work, packaging etc. is local. It wouldn’t make sense to go overseas for that and we help US businesses when we stay local. We’re a big customer for most of our vendors so when we need them to jump through hoops, they’re typically ready to push us to the front of the line. In China, we’re peanuts so the opposite happens.

Internally? You mean like semiconductors and passives? They are all from overseas, mainly Singapore, Malaysia, and the other countries that manufacture 99% of America’s (and the world’s) semiconductors. Here, we haven’t a choice. America stopped its manufacturing and sent it all overseas. And speakers… we’d be crazy to try sourcing cabinets and drivers here in the States. It’s just not competitive and we cannot get the same quality. Not even close. The finishes we expect and the pricing our customers demand make it a no-brainer.

PS Audio has been at the forefront of developing power products over the past 30 years… is there anything radical in the works?

What is your take on the future of optical disc players? You still make the PerfectWave SACD Transport – don’t you feel SACD, especially, is too much of a niche product to survive this decade?

I think people like us will have collections of CDs and vinyl for decades to come. We intend to be there for them.

PS Audio has a couple of integrated streaming devices in its stables – how much more in audio quality do you think this format can achieve?

I don’t think the quality is in the format. At the end of the day, what’s sent over the Internet from good streaming sources should be bit-for-bit identical to what’s stored on a local hard drive. No, the issue isn’t how the data is stored and sent, but rather what you do with it. In my opening paragraphs, I mentioned our galvanically isolated digital output stage. This is a radical and critically important element for our future digital audio products including DACs and streamers. Once you isolate the output data stream from the noisy environment of a streaming computer or a spinning transport, a whole new world of opportunity for great sound d opens up. That’s the future.

What do you see as the future of high-resolution audio, in terms of the format?

I would love to see DSD but it’s likely not going to happen. I would hope something like 176kHz/24 bit becomes the standard. You don’t need more than that and it’s a great format.

How are you able to keep your product prices grounded in reality – do you feel the “brand image” of PS Audio in the high-end community has in any way been affected?

We have always maintained our high-value product approach through design. We have an uncompromising standard when it comes to performance and often we have to rely upon clever design to get us where we need to go, especially if we don’t have the budget to use expensive parts that might have made our lives easier. For example, using clever designs to lower feedback without raising distortion nets us huge sonic benefits and doesn’t cost anything but engineering time.

You can take the PS Audio factory tour with McGowan here.